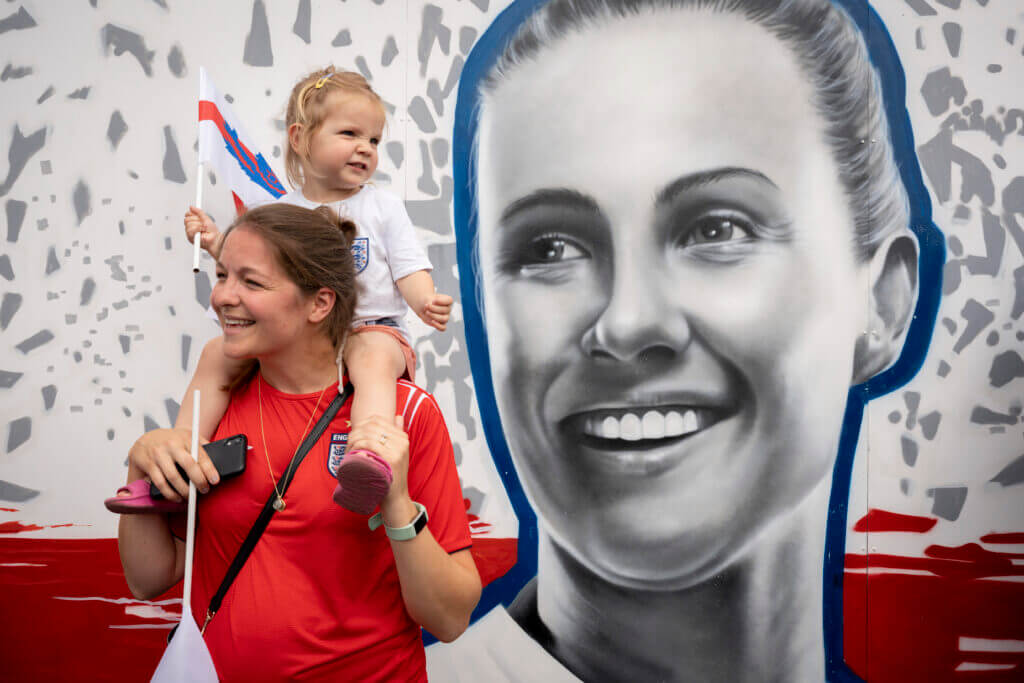 Only days after filling Wembley Stadium with a record 87,192 people en route to their Euro 2022 win, the England women’s team have announced their return to the venue — this time, in October, against the U.S. Within 24 hours of the announcement, all general admission tickets had already sold out, with the queue to buy tickets stretching to a two-hour-plus wait.

There is one small caveat, in that the friendly is dependent upon England’s qualification for the 2023 World Cup in the September international window (they can do so with at least a draw against Austria, or a win at home against Luxembourg), but both federations forged ahead, knowing the demand for the fixture would be at a high point on both sides of the Atlantic.

We’re all still in the glowing aftermath of Sunday’s Euro final, where new and casual fans are more easily converted. Wallets are opening. Ticket sales are booming. Players are earning new followers across social media at an absurd rate. As expected, the rising tide has come in — but what’s most exciting about England’s victory goes well beyond all the virtuous growth we can expect from a major tournament win.

We often talk about game-changing moments in women’s sports, about inflection points — but while these can be hard to assign in real time, women’s football has leaned on this language for decades. Progress has never been quite so clean and easy, however. For every major win and advancement, there are still steps backwards. But more importantly, there is so much work that must happen in order for these moments to truly stick and move the game forward.

If there’s one moment we can all agree on as a turning point in the U.S., of course, it’s hosting the 1999 World Cup: a sold out Rose Bowl, Briana Scurry’s penalty kick save, Brandi Chastain on her knees, shirt in hand, screaming up to the sky in victory. It’s the tournament that changed an entire generation and launched a professional domestic league. It’s the tournament that changed my life, too.

The parallels to 1999 were already easy to spot in England, even before Chloe Kelly whipped off her shirt (with one noticeable difference: a moment’s hesitation to ensure the goal stood, in this brave new world of VAR) to celebrate the Lionesses’ go-ahead goal in extra time.

A new hero for a new generation.

I see you @Chloe_Kelly98 well done. Enjoy the free rounds of pints and dinners for the rest of your life from all of England. Cheers!

England’s Euro win stands as its own accomplishment, and there is no direct one-to-one comparison, though. While 1999 isn’t inaccurate, especially considering the tournament being on home soil, it’s also incomplete. There are shades of 2011 here, too. While the U.S. did not lift the World Cup trophy in Germany that year, the memorable match against Brazil kicked off the modern era of the USWNT and the massive changes around the team’s reach and support over the next decade.

The game has changed drastically. The sport is in a completely different state compared to 11 years ago, or two decades ago, with the growth of domestic leagues and the Champions League in Europe. In 2023, the World Cup will finally feature 32 teams (as recently as 2011, there were just 16 teams), and we’ve seen increased competition quality during every single qualifying tournament this past cycle.

From ‘99 to ‘11, and now ‘22, what’s so exciting about the latest moment on this list is that England’s win does not feel like a one-off or standalone event. Their win is in conversation with other huge accomplishments across the women’s game, particularly historic attendance numbers over the past year at the club level. England’s win matters on a global level thanks to the wider burst of attention and record-setting attendance and viewership figures we’ve seen lately, but England can prove this in the long-term by working to set a new standard by spreading a single success’ impact across all levels of the sport — from grassroots to pros.

The team itself is already using their platform to push at the grassroots level, issuing an open letter to prime minister contenders Rishi Sunak and Liz Truss to remind them that only 63 percent of girls across the country can currently play football in school during physical education classes, and demanding that “all girls have access to a minimum of 2 hours PE,” as well as additional investment for more female PE instructors.

We’re demanding change for the next generation – we @Lionesses say, Let Girls Play.

Here in the U.S., the primary question over the past two decades has been how to maximize World Cup audiences to either launch or grow a professional league. It has not been tidy work, even as there has been progress, and we’ve been too dependent upon this as the primary accelerant for the sport. The major tournament approach has not been sustainable, even though the NWSL is an immediate option for new fans to follow, watch and attend.

The WSL season doesn’t start until September 10, which will provide a fascinating case study to see if having a month to build off the momentum of the Euros provides a greater opportunity not just to sell tickets, but to educate new fans about the league itself. The NWSL struggled with this in 2015 and 2019, posting good numbers for a few matches before coming back down to earth by the end of the season after the USWNT’s World Cup successes.

In 2019, only days after the USWNT had won the World Cup, Laura Harvey’s Utah Royals FC faced Sky Blue FC at Yurcak Field in front of 1,842 people, and the frustration was so clear: the league needed to be far more proactive to fully take advantage of the moment.

“I just hope that we do it, I pray that we do it, and we do it in the right way, and we don’t just expect that because they won means people are going to come to games. It just doesn’t work like that,” Harvey told The Athletic.

More women’s football is JUST around the corner with the return of the #BarclaysWSL 🙌 pic.twitter.com/8OVn959eFF

Ultimately, Harvey stressed, it was not U.S. Soccer’s responsibility to grow the league — that instead fell to everyone involved with the league at every level. And if there’s one immediate next step for England here, it’s one that the U.S. has recently gone through itself, post-2019 World Cup win: an amicable divorce between the FA and the professional league. The NWSL and U.S. Soccer Federation might not necessarily be a perfect model here, but despite all the fears around the league’s sustainability without the federation’s influence, the NWSL has shown that controlling its own fate is the best path forward, not just when it comes to growth (from sponsorships to expansion, and so on), but for simply always having the league as the first and only item on the to-do list.

Even though that’s a top priority for the league, England has four key ingredients for even greater success at the club level — regardless of who’s at the top — beyond the current Euros-inspired moment.

First: accessibility, with a three-year television deal between the WSL and Sky Sports/the BBC (plus additional games on their own FA player that are free to stream). Those same deals also provide the next major piece: established commercial revenue, with £7 million being paid per year for the media rights — though it’s easy to assume the inbound sponsorship offers are going to increase over the next month for the league.

Third, the WSL will feature in EA Sports FIFA 23 at launch, providing yet another path to introduce new fans to the league and its players. Chelsea’s Sam Kerr is on the cover, alongside Kylian Mbappe on the ultimate edition of the game; eventually the 2023 World Cup will be playable in game, too. It’s not just how many copies might be bought to play as the Lionesses or someone’s favorite WSL team, but there could be a significant breakthrough if existing users check out the women’s game thanks to the Euros.

Finally, the WSL’s best advantage is one that might have at times been a double-edged sword: established club brands with built-in loyalties. While teams like Manchester United and Liverpool have had their fair share of criticism for slow-playing the investment into their women’s sides over the years, there’s a massive potential windfall ahead of them if they go all-in on the women’s game.

Multiple WSL teams have already announced games will be played at Premier League stadiums this season. Chelsea will open their season at Stamford Bridge (capacity 41,837) rather than Kingsmeadow (capacity 4,850), and the Merseyside and Manchester derbies will be played at Anfield and the Etihad, respectively.

We can only hope that an influx of investment will allow for stakeholders to push on advancements in facilities and standards across the league, as well as potential expansion for the WSL.

There’s honestly a lot to be jealous of from this side of the Atlantic — but the moment will have a ripple effect here, too.

The NWSL will need to up its game across the board, and increase investment, to prove itself as a top-quality league that can attract and retain international talent. Television numbers like 885,000 viewers in the U.S. for the final between England and Germany could force the issue of increased broadcast investment and accessibility in America, as well, with ESPN’s production value across the entire tournament setting a new standard.

No matter what, the lens through which we view things has once again changed: there’s before and after last Sunday, and the race is on to make the most of it before a golden opportunity slips away.