The 49ers didn’t practice Thursday as players enjoyed a day off. They’ll resume with sessions Friday, Saturday and Sunday before setting their weekly training camp schedule ahead of the following Friday’s preseason opener against the Packers.

The coaching staff, though, didn’t have the day off. Several of the team’s assistant coaches spoke to the media around midday. Below are some nuggets from the session.

The multi-pronged development effort at QB

When it comes to the 49ers’ development of Trey Lance, quarterbacks coach Brian Griese has been the face of the operation — at least among the team’s assistants. But Griese has no prior coaching experience, and the 49ers have set up a collaborative instructional approach for Lance that also leans heavily on recently promoted passing game coordinator Bobby Slowik.

Slowik noted that Lance’s rapport with receiver Brandon Aiyuk, with whom he trained this offseason, is better now than it is with other 49ers’ targets like Deebo Samuel and George Kittle.

He expects chemistry with the entire unit to develop over camp. So does Griese, who lauded Lance’s leadership skills.

“Proper timing of communication — when to get on somebody, when to encourage, when to pick things up — you really are a manager, not only of the game, but of the people,” Griese said. “For someone his age, 22 years old … we’re continuing to grow with that, but he has a foundation, a base, that I think is really impressive. And the relationships he has in the locker room is what I think allows him to do that.”

Team searching for the right mix behind Kittle

How to best complement Kittle? That’s the question the 49ers will ask themselves when finalizing the tight end group next month.

One of the contenders, Tanner Hudson, is an excellent pass catcher. In fact, tight ends coach Brian Fleury said Hudson might have the best hands on the entire roster, an argument supported by two circus catches he made this week.

The best blocker aside from Kittle? That’s been Tyler Kroft, who at nearly 260 pounds is bigger than the 49ers’ other tight ends and who is accustomed to how the 49ers block after playing in a similar system with the Jets last season.

“I think he’s played more snaps than even George has,” Fleury said of Kroft, who turns 30 in October. “He just has a lot of experience, and he doesn’t just make as many mistakes as a result of that experience. More than anything, I think that’s what put him ahead.” 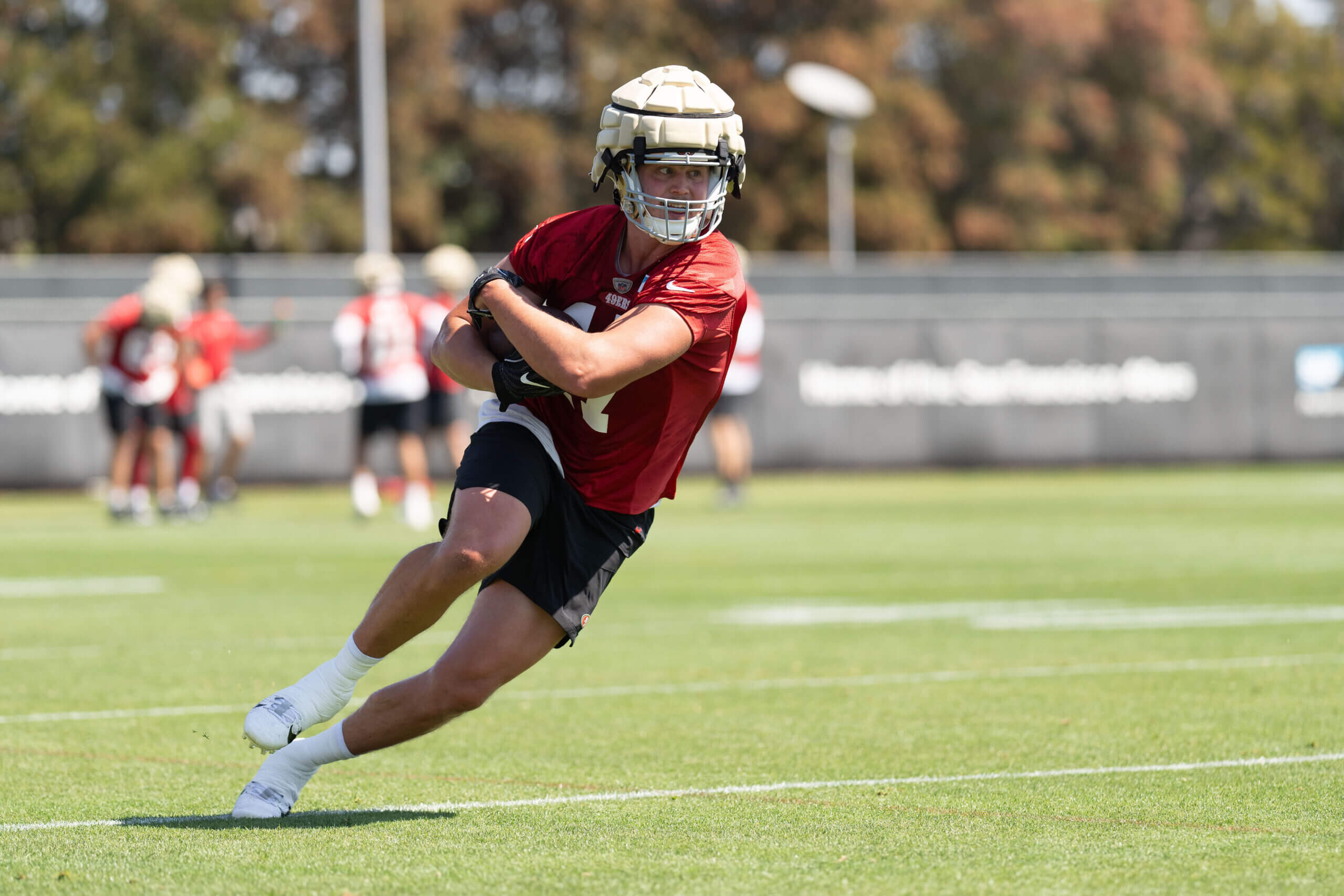 Kittle and Ross Dwelley have seen the most snaps with the first-team unit so far in camp. Kroft usually is next off the sideline, followed by Hudson and Troy Fumagalli. Jordan Matthews tore his ACL during a one-on-one drill this week and will miss the season. Charlie Woerner has yet to practice after offseason core muscle surgery.

Fleury said the goal is to have the right combination to support Kittle, or if injury strikes, fill in for him. Kittle has missed 11 games the last two seasons.

Said Fleury: “You have to figure out how you can use all those skill sets together to maintain the integrity of the offense in the event George isn’t there.”

With interior stalwart D.J. Jones gone and a trio of defensive tackles already having suffered injuries in camp, Javon Kinlaw’s importance for the 49ers only seems to be growing. The 49ers consider the third-year tackle, who underwent ACL surgery midway through last season, a hinge point for their line.

Defensive line coach Kris Kocurek knows the stakes, and he’s bullish on the 320-pound Kinlaw’s return to the lineup.

“I’m really excited about where he’s at,” Kocurek said. “Big, long, explosive player that we feel can reset the line of scrimmage and be disruptive. … He’s finally healthy. He finally feels that he can go out there and be a healthy Javon Kinlaw, whereas last year, it was a day-to-day struggle for him. And it’s hard when you go out there and you feel that you can’t put your best out there because you’re hurt. And he was trying to battle through it. And that’s part of the NFL. But he’s in a good mental spot right now.

“I see him continuously working. A week after the NFC Championship Game, when all the players have exit interviews, Javon Kinlaw’s back here grinding, every day. And then we go through the offseason, he’s still here grinding with his teammates, working with them. And then they all leave, go on summer vacation for five weeks — and Javon Kinlaw is still here, still grinding. I’m getting videos from Javon showing the work that he’s putting in. He’s putting in a lot of work. … Once all that’s done, and all the reps are stacked and the install is all in with him, I can’t wait to watch him play football. It’s been a while.”

Davis-Price has been physical … even with his coach

Anthony Lynn has been coaching long enough to know that the running backs he pushes the hardest sometimes will push back when they’re going through drills.

That’s what happened when Lynn, armed with a pad during a sideline drill, encountered Tyrion Davis-Price and then got a little more pop from the rookie than he did the other runners.

“I was expecting that from him, so I kind of stepped out of the way, if you noticed,” Lynn said with a laugh. “But we have a good relationship. Right now we’re just pushing each other and trying to get the best out of him.” 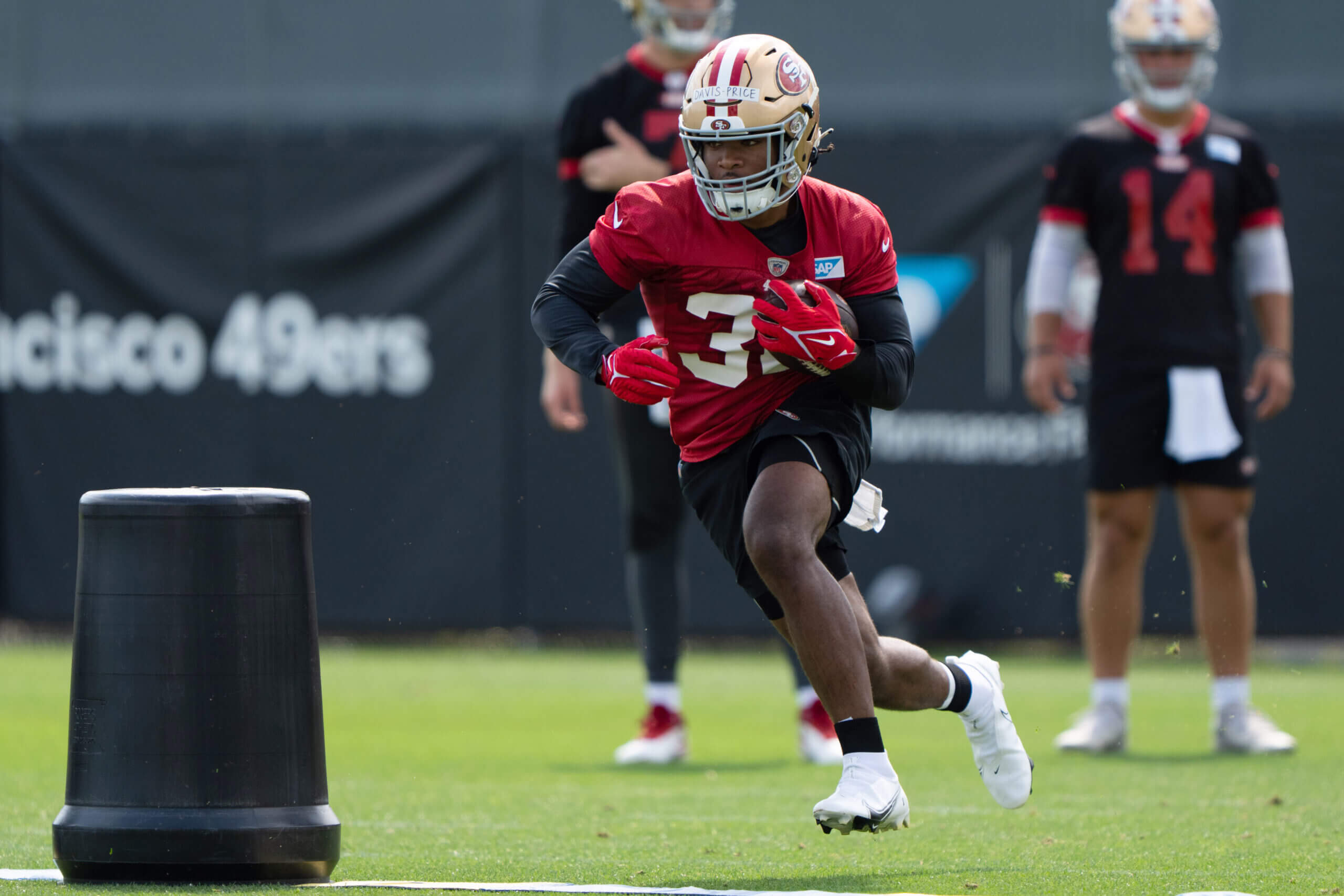 A theme for the 49ers’ running back room in 2022: more heft. Incumbents Elijah Mitchell and Trey Sermon added weight in the offseason while the team brought in a pair of 225-pound rookies in Davis-Price and undrafted Jordan Mason. Lynn said he’s liked the sudden and violent way Davis-Price has run this summer.

“When the pads came on, he definitely had a couple of physical runs in there,” Lynn said. “When the defensive players come over and say, ‘Hey, that feels a little different,’ you like to hear that.”

There’s a ways to go in the RG battle

Chris Foerster isn’t quite ready to coronate rookie Spencer Burford, who’s taken all the 49ers’ first-team snaps at right guard. The offensive line coach says the 49ers are still aiming to work Jaylon Moore and Colton McKivitz into the mix as camp progresses, but that rotations designed to keep players fresh have made that challenging.

“He’s done a nice job, has nice traits for guard,” Foerster said of Burford. “But it’s been a little hard throughout the course of camp with our numbers game. (Mike McGlinchey) coming off the injury, they’re easing his reps. And the same with Trent (Williams) — you don’t want to overdo Trent this time of the year. So all of a sudden, it’s hard without killing those guys to say you’re going to play guard as well. We did it one day with McKivitz and it really wore some guys out.”

Still, Foerster has been impressed with Burford since the offseason program, with much of his excitement rooted in the rookie’s nearly 35-inch arms. That ranks in the 94th percentile of offensive linemen.

No 49er cranks up the practice-field energy quite like Fred Warner. He’s the team’s most constant chirper, he challenges offensive players, and during a particularly rough-and-tumble practice Tuesday, every receiver on the squad seemed like they wanted to fight him.

Linebackers coach Johnny Holland said it reminds him of a former pupil — DeMeco Ryans, whom Holland coached for five seasons with the Texans and who now, of course, runs the 49ers defense.

“They’re twins,” he said. “DeMeco was the guy who got everybody going when there was a lull in practice. … DeMeco was just a true leader from Day 1. And I see that in Fred as well. He knows when he has to turn a switch to flip the team and get them going.”

Warner drew the anger of the receivers with some after-the-catch roughness on Aiyuk and again following a big hit — in what is supposed to be a no-tackling practice — on Marcus Johnson. Kyle Shanahan didn’t like the lack of discipline and halted practice after Warner’s hit sparked a melee.

Holland, however, said Warner’s objective is to push his offensive teammates to be better more than it is to push them around.

“I think Fred knows that line,” Holland said. “He’s going to intimidate and talk and all that. But his No. 1 goal is to make our offense better. Because he knows that we’re going to win as a team.”

Taiwan crisis: US condemns China missile launches as second day of exercises due to begin