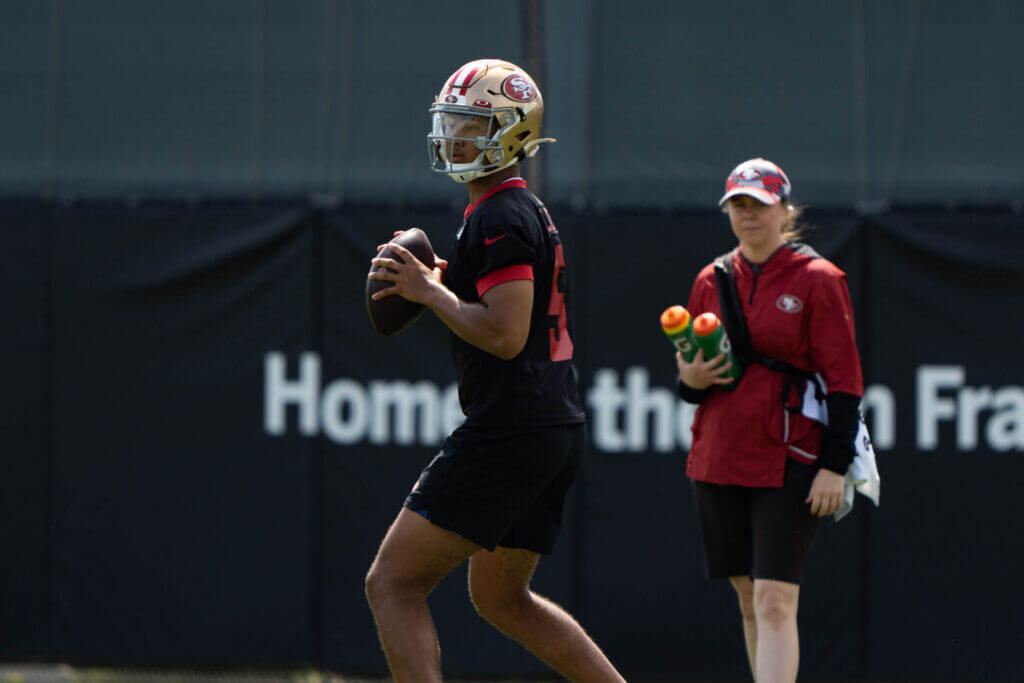 SANTA CLARA, Calif. — Ten practices in, the 49ers can say that they’ve made it through the dog days of training camp. Monday is a day off for the players and Friday’s preseason opener against the Packers means that the longest stretches of uninterrupted summer practice are in the rearview mirror.

But the 49ers still have plenty of work to do — namely on the offensive side of the ball.

A day after throwing a last-second touchdown pass to finish practice on a rousing note, quarterback Trey Lance suffered through his worst session of camp. He was accurate to start Sunday’s practice, completing three straight passes, but Lance connected on only one of 11 throws after that. He tossed an ugly interception straight to linebacker Fred Warner and only avoided another pick thanks to a drop from 49ers cornerback Charvarius Ward.

Lance’s final line: 4-of-12 with that one interception, lowering his camp-long completion rate to exactly 50 percent (65-of-130).

49ers QB log updated… Through 10 practices, Trey Lance has completed exactly 50% of his passes with 6 INTs on 130 attempts. Move-the-ball splits and notes also in here:https://t.co/6a96vlvTZv

Nate Sudfeld and Brock Purdy, the 49ers’ other two quarterbacks, also threw picks. Theirs were particularly costly, coming on back-to-back plays with the 49ers offense positioned near its own end zone in a move-the-ball period. Undrafted rookie linebackers Marcelino McCrary-Ball and Jeremiah Gemmel intercepted Sudfeld and Purdy, respectively. Gemmel’s pick came in a crowded spot off a possible deflection.

It perpetuated a theme of this training camp: The defense, which has logged 16 interceptions after recording only 11 throughout all of 2021 camp, has generally controlled the proceedings. Notable exceptions came Friday and Saturday, when Lance and the offense finally delivered some sustained pushback.

But the defense clearly remains in the driver’s seat.

It’s worth reiterating the 49ers have expected struggles during Lance’s first year at the helm. On the first day of camp nearly two weeks ago, coach Kyle Shanahan suggested a 2022 formula for success: A strong 49ers supporting cast will need to give Lance and company some runway to develop since growing pains are considered inevitable.

Still, Lance’s Sunday session was notably rough. He missed on five straight throws during the early scripted portion of 11-on-11 work, with most sailing high. Lance’s accuracy on short-to-intermediate routes remained mostly nonexistent as practice wore on.

During move-the-ball work, Lance connected on a four-yard pass to tight end Tyler Kroft. But that was his last completion. Lance missed high again on a 20-yard attempt over the middle to Brandon Aiyuk, who took a hit from Jimmie Ward as he elevated toward the football.

The 49ers have consistently raved about Lance’s composure, and it’ll certainly be tested as he aims to navigate poor outings against a talented defense. Shanahan has said that the QB’s steady demeanor was a deciding factor in the 2021 pre-draft process when the 49ers were deciding who they’d select with the No. 3 pick.

Just more than a month remains before the Sept. 11 season opener at Chicago, and the 49ers should see Lance’s sense of equilibrium put to an intensifying test over that time. The 22-year-old is clearly a volatile performer right now, and the 49ers’ goal as the drumbeat of the season opener grows louder is to raise the floor of his performances while maintaining his promising ceiling.

Aiyuk, for one, is confident that Lance will even out his mercurial trajectory.

“The best thing about Trey: He walked off the practice field and was still the exact same way today,” Aiyuk said. “He talked about it. Talked to us after a couple plays he wished he had back. Talked to us the same way as if he were to hit a play. What he saw, what he didn’t see, what he liked. ‘That was on me. Maybe we should be here.’ He was still talking to us, trying to figure it out. Level, even-keeled dude. We don’t worry about him at all, really. We’ll look at it. He came in and said, ‘Let’s take a look at it later on today.’ Then we move on.

“That’s what practice is for, Day 10. One thing I’ve learned is that you never know what these guys’ arms feel like. The same way for us (receivers). We go out there some days, our legs are tired. They may expect us to come out of our breaks a lot faster than we did, and our legs are a little bit tired so we can’t do so. So the same thing for them (quarterbacks), you never know what those guys’ arms are feeling like. They’re coming out here throwing a bunch of balls. So we’ve just got to look at it, get it corrected and then come back with the day off and get better.”

Other observations from Sunday’s practice:

• Both Jeff Wilson and rookie Ty Davis-Price popped pads with physical runs. Since the 49ers don’t tackle fully to the ground during practice, though, it’s hard to tell just how big of a gain each back would’ve attained.

That previews at least one intriguing aspect of Friday’s preseason opener. It’ll be the first live-tackling exhibition of the season, so Shanahan and his staff will finally have a chance to more completely evaluate their running backs.

If this first round of padded practices has been any indication, though, the 220-pound Davis-Price has a true bruiser’s potential. One play-ending shove from Davis-Price even sent second-year 49ers cornerback Ambry Thomas to the ground.

• Aiyuk said that he and Warner, who fought twice during Tuesday’s session, have buried the hatchet.

Aiyuk had told reporters early in camp that Warner was “annoying” and “irritating.” The linebacker responded that he was merely trying to motivate Aiyuk to reach his full potential by antagonizing him. Matters reached a boiling point Tuesday. Aiyuk was ready to throw punches with Warner after the linebacker hit receiver Marcus Johnson (the contact eventually sent Johnson into the concussion protocol).

All is forgiven now, though.

“Just middle of camp,” Aiyuk explained. “Everybody’s competitors out there. I’m tired of seeing them. I like playing with them because — we talk about it all the time — we got into an argument the other day about if the offense played the defense, we would beat the brakes off of them. I think they felt that a little bit because the day after, they came with it, we came with it. But that’s just how we play when you put on the tape and watch the Niners. Nobody’s backing down from anybody. So I feel like when we go against each other and people butt heads, that’s what happens. I’m not backing down. He’s not backing down.”

• One caveat to the struggles of the 49ers offense: They were missing starting tackles Trent Williams and Mike McGlinchey, both of whom had planned days off. Justin Skule and Colton McKivitz started at left and right tackle, respectively. Tight end George Kittle also rested Sunday.

Second-year cornerback Deommodore Lenoir saw first-team action opposite Charvarius Ward in Moseley’s place. It does appear that Lenoir, who has had a strong camp, might be ahead of Thomas in the pecking order at corner.

• The offense, despite its struggles, did manage a few chunk plays. Lance hit receiver Deebo Samuel and Aiyuk on throws that traveled about 20 yards over the middle of the field to open team drills. Later on, Sudfeld found receiver Ray-Ray McCloud, who made a fantastic falling catch, for a big pickup down the sideline. And Purdy connected with rookie wideout Danny Gray on a back-shoulder pass that gained about 30 yards.

• In his interview with NFL Network, Jimmie Ward might’ve poured some fuel on the 49ers-Rams rivalry when discussing last season’s NFC Championship Game.

“It was heartbreaking,” Ward said. “At the end the day, they figured it out and they were the better team that day and they won. But other than that, I’m ready to play ’em. I don’t got no love for them.”

Is there anything in particular behind that animosity toward the Rams?

“We won both of those (regular season) games last year,” Ward said. “I was looking at some of their main players, I wanted to go shake their hands and all that. But they walked off the field. But when you finally win a game, you want to shake our hands? All right, I got something for you.”