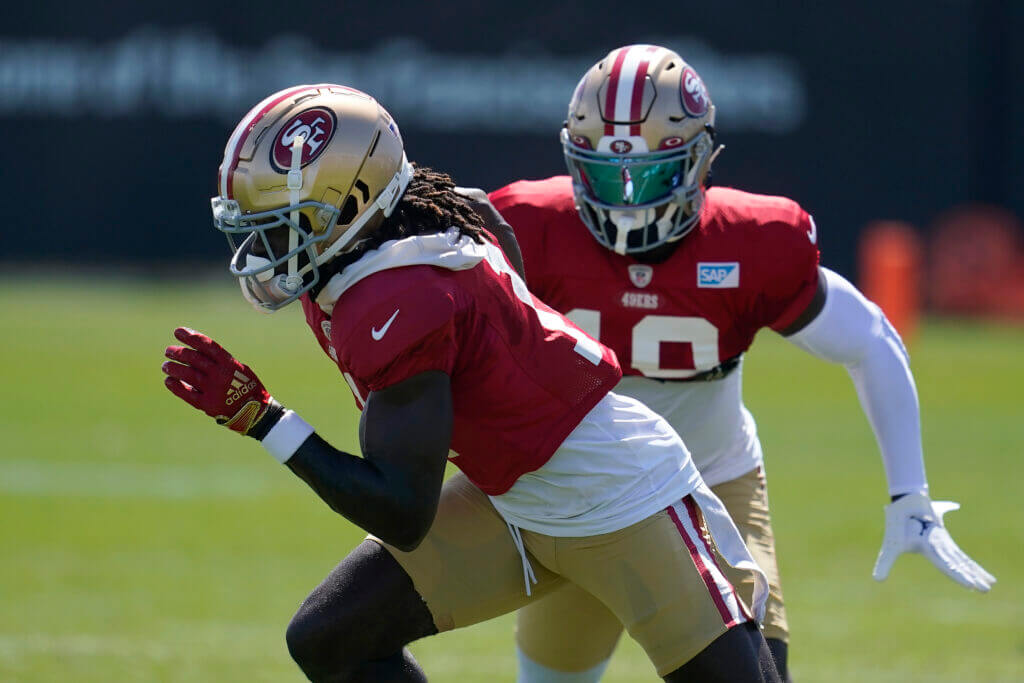 SANTA CLARA, Calif. — Entering Friday’s practice, the dominance of the 49ers’ defense during this training camp had been well-documented — and so had its brashness.

The latter, especially, had sparked two brawls at Tuesday’s practice, crossing a line that didn’t please coach Kyle Shanahan. Linebacker Fred Warner and receiver Brandon Aiyuk squared off twice. The second time, Warner popped Marcus Johnson late on a crossing route, and Shanahan revealed on Friday that the hit had actually sent the wideout into the concussion protocol.

“I love the intensity of it, but I don’t think you have to fight to be intense, though,” Shanahan said. “Scuffles are scuffles. Then they lead to other stuff. I think that’s why we had a guy in the protocol — because we took an unnecessary shot on someone, which led to the big fight. And then we had a bunch of haymakers and stuff thrown in there, which only breaks hands.

“I think our team is pretty tough. I think we’re pretty physical. I think if most people probably voted on who was the most physical team on tape last year, I think we’d win most of that, and we didn’t get in one fight last year. So, I don’t think that totally pertains to toughness.”

Training camp for a violent sport involves toeing a line, and Shanahan made clear that the 49ers defense — Warner, in particular — had crossed it earlier in the week.

That, then, set an intriguing backdrop for Friday and what would be the 49ers’ most competitive training camp practice to date. Up until then, practices had almost exclusively featured scripted team-period work. But that changed with a shift to prolonged move-the-ball action, during which the line of scrimmage shifted to simulate in-game rhythm.

A large group of 49ers defenders danced on the sideline as players lined up for the day’s first move-the-ball snap. The remix of “Crunk Ain’t Dead” blasted over the loudspeakers. The unit was still clearly swaggering boisterously, thanks to its hot start to camp.

But the tone changed quickly. It happened as soon as quarterback Trey Lance handed off to running back Elijah Mitchell, who bolted through the left side of the line and went untouched for what would’ve been an 85-yard touchdown run in an actual game.

The 49ers’ defense fell silent on the sideline and the offense, most noticeably left tackle Trent Williams, started dancing instead — all as Mitchell sprinted toward pay dirt.

Only time will tell if this will be an inflection point in the larger flow of this 49ers’ training camp, but it certainly marked the start of a good stretch for the team’s offense. Lance — who’d entered the day completing just 48 percent of his passes over camp — finished 8-of-12 on the day, including 5-of-7 during move-the-ball work.

The offense even managed to overcome difficult situations that Shanahan had intentionally manufactured for it. He called three holding penalties to begin drives — not because anyone actually committed an infraction, but because he wanted to see the offense work out of first-and-20 situations from its own five-yard line.

“We call it ‘Get Back On Track’ period,” Dwelley said. “First-and-20, and you’re just trying to get a first down to recover from a bad situation.”

All three times, the 49ers offense managed to move the chains. Lance hit receiver Deebo Samuel to convert on third-and-10. QB Nate Sudfeld, who was a sharp 14-of-16 over the whole practice, connected with tight end Tyler Kroft to register a first down for the second team. Third-stringer Brock Purdy then hit wideout KeeSean Johnson for another first down.

This was the type of response that the 49ers’ offense had been unable to consistently deliver, and the defense took notice.

“The pass game is definitely kicking up,” safety Tarvarius Moore said.”They’re making it tougher for us. They’re giving us different looks —running routes out of different formations, things like that. That’s making us stay real disciplined.

“… But that’s what we love from our guys. We talk to our receivers each and every day, telling them what we see from our side of the ball — maybe anything that can help them get going against our opponent. It’s all competition. We just want to make each other better so we can be the best team we can be this year.”

Some other notes from Friday’s practice:

• Shanahan expanded further on how he wants the 49ers to regulate belligerence on the practice field: “I want everyone challenging each other. I don’t care how much crap someone talks. I don’t care how close they get to fighting. They can do whatever they want to get themselves going and being as intense as they want, and bringing the best out of each other, which happens a lot that way. It’s the same on the field. But once you throw a punch, you get ejected or you get a penalty.

Said Dwelley: “It’s definitely a line, but football is a one-of-a-kind sport. It’s a sport where it’s definitely the hardest to find that line, but I think we’ve all made it to this level and we all can straddle that line pretty well.”

I avoided getting hit by Deebo Samuel and it turned into a good video of Trey Lance working on deep throws post-practice.

Ray-Ray McCloud also in on the work here — as is Dan Brunskill for the snapping: pic.twitter.com/BABpHxem5K

The 49ers have two open spots on their 90-man roster, as a result. The team has reportedly worked out three offensive linemen (Jordan Mills, Tyree St. Louis and Caleb Benenoch), a quarterback (James Morgan) and a receiver (Willie Snead) for those openings. The 29-year-old Snead has been in the league since 2014 and spent his first offseason with the Browns, where Shanahan was his offensive coordinator.

• Second-year offensive lineman Aaron Banks stayed in Santa Clara during the offseason dead period to continue reshaping his body with the 49ers’ strength and nutrition staffs. The team is very happy with Banks’ work, and he’s on track to take over the starting left guard spot vacated by Laken Tomlinson, who left in free agency for the Jets.

During Friday’s move-the-ball work, Shanahan called a designed QB run behind Banks, who cleared way for an 11-yard Lance gain.

“I try to block my ass off try to make sure he doesn’t get hit,” Banks said matter-of-factly after practice.

On Thursday, 49ers O-line coach Chris Foerster said that Banks — who played only five garbage-time snaps in 2021 — has held an excellent trajectory ever since he suffered a shoulder injury last preseason.