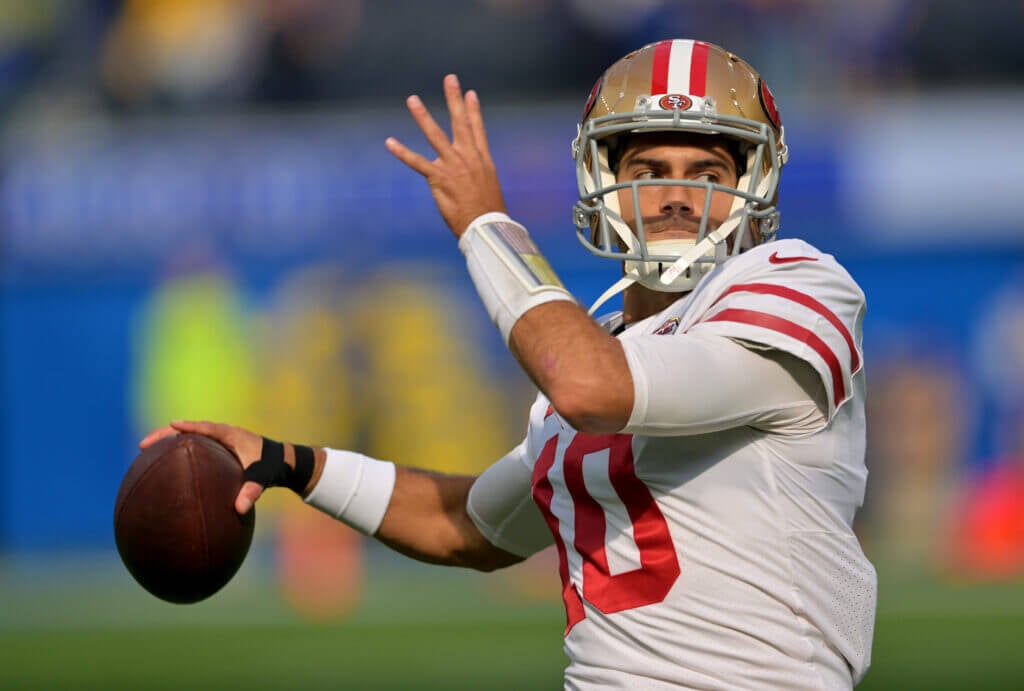 The San Francisco 49ers have restructured quarterback Jimmy Garoppolo’s contract, according to multiple reports. Garoppolo’s new deal will keep him in San Francisco this season as a backup behind 2021 No. 3 draft pick Trey Lance, who will be the team’s starter this season.

Garoppolo has spent parts of five seasons with the 49ers, who acquired him from the New England Patriots for a second-round pick midway through the 2017 season. He missed 13 games in 2018 and 10 in 2020 due to injuries but helped the 49ers reach the Super Bowl when healthy for the full 2019 season.

Last year, general manager John Lynch and coach Kyle Shanahan said before and after the draft that they planned to keep Garoppolo in 2021 despite trading up for the No. 3 pick to take Lance.

Garoppolo, 30, went 9-6 in his 15 starts last season and helped the 49ers reach the NFC championship game, where they were ultimately defeated by the Rams. Los Angeles went on to win Super Bowl LVI. Garoppolo completed 68.3 percent of his passes for 3,810 yards, 20 touchdowns and 12 interceptions in the regular season.

An eight-season NFL veteran, Garoppolo has a 33-14 record as a starter with 71 touchdowns and 38 interceptions.

After falling to the Rams in the NFC title game in January, the quarterback was asked if this was potentially his last game with the franchise.

“(The emotions) hit pretty hard in the locker room. … Just one of those things, you gotta be glad it happened, just smile from it and think about the good things,” Garoppolo said. “We’ll see what happens in these next couple days, weeks, whatever. But I love this team.”

He’ll now spend this season in San Francisco. The 49ers will head into the regular season with Lance under center, who appeared in six games in 2021, starting two in place of Garoppolo. Lance posted a 1-1 record in those two starts and completed 57.7 percent of his passes for 603 yards, five touchdowns and two interceptions. He also rushed for 168 yards and a touchdown in those games.

Australians might be ‘living with Covid’ but aged care residents are still dying with it. Where is the outrage and grief?

The Guardian view on politics suspended: the crisis won’t wait

The Guardian view on Kwasi Kwarteng: better at making enemies than forging policy

Yes, Australian house prices are dropping, but from staggering heights

In mourning, we may appear to be one United Kingdom – but don’t fall for the tale of togetherness

Australians might be ‘living with Covid’ but aged care residents are still dying with it. Where is the outrage and grief?

The Guardian view on politics suspended: the crisis won’t wait

The Guardian view on Kwasi Kwarteng: better at making enemies than forging policy

Yes, Australian house prices are dropping, but from staggering heights

In mourning, we may appear to be one United Kingdom – but don’t fall for the tale of togetherness

It’s not all about revolution. We need to celebrate incremental change too

There is no single ‘national mood’ – just ask Britain’s republicans

Celebrities, let me fix this for you – you’re not ‘humbled’ to win something, you are ‘honoured’

Don’t ask me to give the Queen a minute’s silence, ask me for my truth about British colonialism

Hollow, cloying veneration greeted the Queen’s death. Now history calls on us to get an Australian head of state