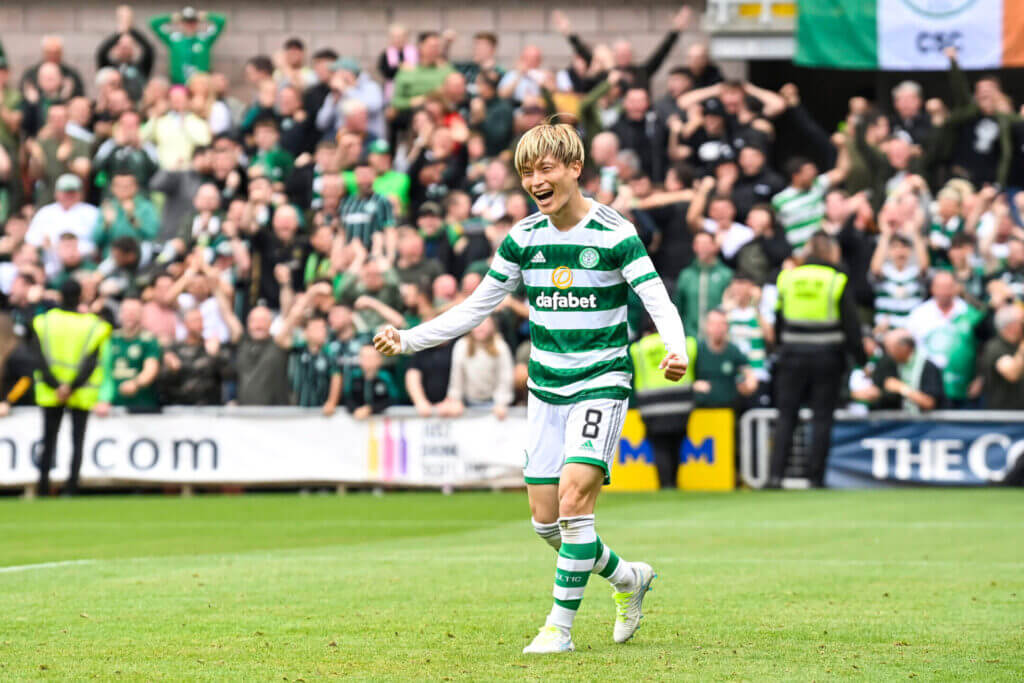 As the summer transfer window approaches its end game, the only faint whiff of drama regarding outgoing players at Celtic has been reported interest in Matt O’Riley from English clubs including Manchester United, Liverpool and Newcastle United. Borussia Dortmund are also believed to have made enquiries.

It is easy to see why he might crop up on club databases. A 21-year-old who tops a title-winning side’s creative metrics from last season will always earn covetous glances — according to Instat, O’Riley led Celtic in key passes per 90 minutes (2.6) and expected assists per 90 (0.77). But if an analyst or scout were to apply the eye test and watch his showing during Celtic’s record-breaking 9-0 win over Dundee United on Sunday, any positive impression would be emphatically affirmed. They might also jot down the names of many of his team-mates.

But at this stage, why would O’Riley, or any of them for that matter, want to leave? The Athletic has been told repeatedly in recent weeks about the positive mood around Lennoxtown but the joy of their football and the sincerity of their grins when celebrating such football is illustration enough.

Before yesterday, O’Riley had been quietly effective during the first four league games, moving the ball well and contributing defensively without having a breakthrough high-quality moment. Just as Celtic had been efficient without yet being scintillating. That changed against United.

In truth, O’Riley started the game a little shakily, including a heavy touch that almost let United in for a one-v-one with Joe Hart before he recovered well and amended for his error. But after Kyogo Furuhashi’s second goal made it 2-0 at 40 minutes, O’Riley and Celtic exploded. In the build-up to Celtic’s third, he executed this pass to Liel Abada:

A first half hat-trick 🔥 pic.twitter.com/WkqLlM0Wip

If you were wanting a moment of high quality and vivid imagination to reinforce a bright start to the year, they do not come more sensational than that. He then produced two assists, for Filipe Jota’s goal and the first of Abada’s hat-trick, before being subbed off on 62 minutes.

But while O’Riley was superb, it was also a level of performance matched by most of his team-mates.

Furuhashi continued his great form with a first-half hat-trick and an all-round extraordinary display, with dainty one-touch passing, perfectly-timed runs, and relentless pressing. If the 27-year-old stays injury free after the hamstrung five months of his debut campaign, 30-plus league goals this season is a real possibility. Meanwhile, with a goal and assist to his name, Jota now has seven goal contributions in the first five league games of the season.

Abada made his first start of the season and staked a serious claim to keep his place against Rangers next week with three goals, an assist, and a pre-assist that was one of the best moments of individual quality in a game fit to burst with them. If the gauntlet was thrown down to the 20-year-old to find greater consistency, and progress from erratic greatness towards becoming a European-level attacking player in the Jota and Furuhashi mould, then he made a statement at Tannadice.

Reo Hatate, making his first start since being injured in the league opener against Aberdeen, gave a pertinent reminder of his own quality, with some stunning passes, electric dribbling, and his own well-executed assist for Abada’s second. Even two of the substitutes in Aaron Mooy and Daizen Maeda had excellent quality in their brief outings. Mooy played a lovely ball over the top for the Japanese forward to show great awareness and drive a cross for Abada to complete his hat-trick with a composed dink.

Dundee United crumbled after Furuhashi’s second goal made it 2-0. They were poor. But on the “were the losing team that bad or winning side that good?” spectrum, arguably the result was tilted towards the latter. Celtic were that good.

Celtic have mounted massive scorelines this century, including beating Aberdeen 9-0 in 2010-11 and Hamilton 8-1 in 2016. It reads as absurd given the scale of the result, but if you watch the highlights from those games there are remarkably few good goals, with plenty of penalties, scrappy finishes and keeper howlers. On Sunday Josip Juranovic struck his goal well but the keeper was also unsighted, while Carl Starfelt’s was a well-taken header from a corner. The remaining seven goals however were all high-quality, inventive, one-touch, and clinical football. All of them.

Sunday was Celtic’s biggest ever competitive away win, across their 134-year history.

It all hammers home how important Celtic retaining all their key players this summer has been. Not having to sell the likes of Jota, Furuhashi, Juranovic, or O’Riley has allowed this team to go from strength to strength. As occurred in the summers of 2018 and 2019 when they sold Moussa Dembele and Kieran Tierney, they have not taken one step forward but also one step back. This is a team building on the foundations of last year’s success.

The guaranteed £40million ($47m) from participating in the Champions League is inevitably the key factor behind the club not looking to trade, while it is also an attractive proposition for players to stay, as O’Riley admitted. “I am really happy to be at the club, where we will also be playing in the Champions League, which I am really looking forward to,” he told German newspaper Bild this week.

Postecoglou said last month that he “encourages” interest from big teams in his players, as he did after Atletico Madrid were reported as monitoring Juranovic, as it highlights the great work the team is doing. While he might have a different response if O’Riley and Juranovic were not content and leaving was more plausible, he is correct that such interest is a useful yardstick that this team are on the right track.

But the fact players of Juranovic and O’Riley’s level are so settled is a testament to what the manager and his staff are building. The big moves away will come, because player trading is ultimately Celtic’s business model and these are also ambitious young men who will want to play consistently at the highest level. But for this year — with Champions League football, a positive and united atmosphere around the team, and the sense of progress as motivators — everyone’s focus is on making this season a massive success.

With four days left of the window, barring any late drama, this team will be preserved and looking forward to competing in the Champions League, and replicating or even surpassing what they delivered on Sunday in Scotland.

Even in the darkest days of new parenthood, I hold on to the thought that this too shall pass