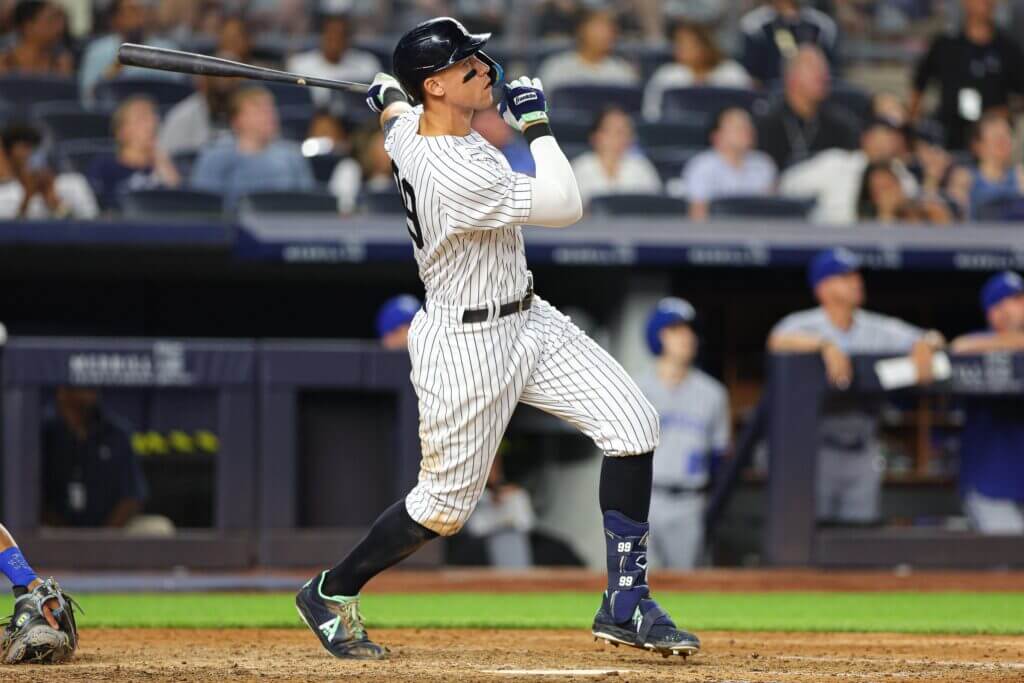 Aaron Judge is attempting to do something no major-league player has accomplished in 21 years: hit 60 home runs in a single season.

After ending July on a tear, the Yankees star’s pace rivals that of Barry Bonds, Mark McGwire, Sammy Sosa, Roger Maris and Babe Ruth. The home run chase is on.

As Judge tries to become the sixth player to hit 60 in an MLB season — and perhaps chases more — we’ll track how his numbers compare to baseball’s single-season home run kings.

MORE: Aaron Judge has learned to make small adjustments to get big results

Aug. 3: Yankees give Judge some rest

Judge didn’t play for the first time since July 7 as the Mariners defeated the Yankees 7-3.

Looking ahead: St. Louis Cardinals right-hander Dakota Hudson (4.10 ERA, 8 HRs allowed in 101 innings) takes the mound Friday for the first of a three-game series. It’s the first time Judge will play in Busch Stadium and his first time facing Hudson.

Seattle’s staff pitched Judge carefully Tuesday, as he walked three times in five plate appearances and went 0-for-2 in an 8-6 loss. The three walks were a season high.

Judge jumped on the first pitch he saw from Mariners left-hander Marco Gonzales in the bottom of the second inning, sending a cutter into the visiting bullpen in left-center field. The solo shot was part of a 2-for-4 game for Judge in a 7-2 win.

Looking ahead: Judge faces right-hander Logan Gilbert (2.78 ERA, 13 HRs allowed in 123 innings) on Tuesday. He’s 0-for-3 with one strikeout against the 25-year-old.

Here’s how Judge got to August with a chance to make history.

Judge used July to distance himself from the pack as the 2022 home run leader, hitting a league-best 13 homers and slugging .807 in 93 at-bats. Those numbers included three multi-homer games, against the Boston Red Sox, Baltimore Orioles and Kansas City Royals, and a walk-off home run against Kansas City on July 28. New York went 7-3 in the 10 July games where Judge homered.

Judge hit his longest home run of the season at Baltimore on July 22, driving a pitch from Tyler Wells 465 yards over the left-center-field wall. Here’s a closer look at each of Judge’s July blasts (distance numbers via Baseball Savant):

Judge’s first home run of June was one of his most impressive, considering the opposition. On June 2, he ripped a Shohei Ohtani slider over the left-field wall at Yankee Stadium for No. 19 on the season.

The other highlights included multi-homer games against the Chicago Cubs (June 11) and Tampa Bay Rays (June 22), and a walk-off HR in the 10th inning against the Houston Astros on June 26.

“You feel it pre-pitch, like walking up to the plate and the walk-up song plays and the crowd is gonna get crazy,” Judge said afterward, when asked about handling the pressure of a big moment. “Then once you step into the box and dig in and take a deep breath, it doesn’t go silent, but you just kind of lock it in.”

May: Judge wins AL Player of the Month

The Yankees outfielder’s consistency — 12 home runs and a .311/.378/.699 slash line — earned him American League Player of the Month honors for the first time since his rookie season in 2017. New York went 6-3 in games where Judge homered, including a walk-off win over the Toronto Blue Jays on May 10 and multi-homer games against the Royals and Orioles.

This was also the month where he hit his shortest home run, a 355-foot, opposite-field fly against the Chicago White Sox on May 13.

Judge’s 12 home runs matched Dodgers star Mookie Betts for the most by any player in May.

New York ended the first month of the season on a seven-game winning streak and Judge was a catalyst. Five of his six April home runs came in those seven victories.

At the end of April, though, Judge wasn’t even the home run leader on his team, let alone the league. Anthony Rizzo paced New York (and MLB) with nine in the first month.

How Director Peggy Holmes Found Her Way to ‘Luck’