It was 58 years since Royal Union Saint-Gilloise last competed in European football.

Ten British Prime Ministers have come and gone since then, as have many Rangers managers, but if there were nerves upon the Belgian club’s return to the European stage on Tuesday night, they settled quickly.

Union won the first-leg of the Champions League qualifier 2-0 against a Rangers side it was hard to believe were Europa League finalists just over two months ago.

While Union were intense and incisive, Rangers were ponderous and methodical, to a fault. The second goal came from a harsh VAR-assisted penalty call for a handball on Connor Goldson, but the result did not flatter the Belgians. If anything, Rangers are lucky to still be in the tie.

There can be no bones about it, this was an unnerving night for Rangers. A summer of transition means it can often take time for a team to gel but in Glasgow, this is not a luxury afforded.

Not even masterminding a run to the Europa League final can put enough credit in the bank to compensate for an exit at the third round of Champions League qualifying, the prospect manager Giovanni van Bronckhorst is facing.

Had he maintained the lead built up in last year’s Premiership and been on the winning side of the penalty shoot-out in Seville, he may have been bulletproof. But a rough performance at Livingston in the league opener followed by a lifeless one against Union in Leuven means anxiety is already festering among the support. 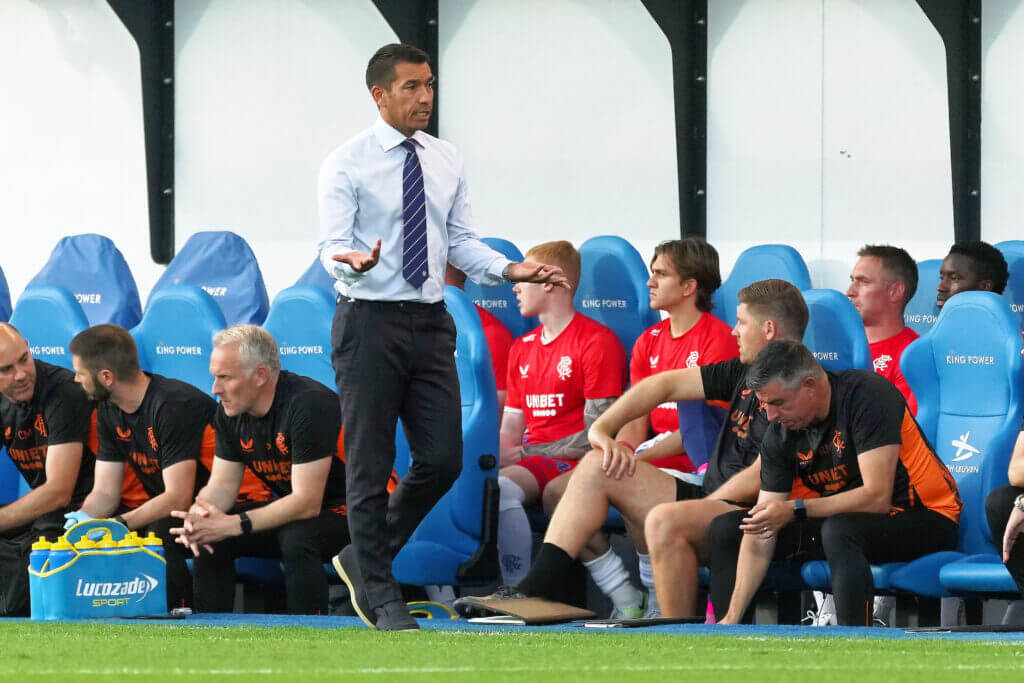 Turgid doesn’t even begin to capture just how flat it was. Rangers were devoid of ideas.

A full pre-season was meant to have helped consolidate the manager’s full vision for the team, but vagueness characterises their attacking play. Rangers look more structured when building from the back, but they seem to lack a plan to progress into the final third.

Playing a back three by dropping John Lundstram into defence removed an integral presence from the middle of the park. Ryan Jack looked uncharacteristically off the pace, while Glen Kamara was completely ineffective as a No 10 with Rangers unable to access him.

Like last season, Rangers have gone into the qualifiers without their full-strength team. The defeat to Malmo last summer saw Leon Balogun, Kamara and Kemar Roofe suspended, while Alfredo Morelos wasn’t back available after international duty.

On this occasion, they were with Morelos and Ryan Kent, while new arrivals Ben Davies and Ridvan Yilmaz came on as substitute debutants. They haven’t been signed for over £7million ($8.5m) to be squad players, so they will likely come into the side soon, possibly for the second leg.

There are four, potentially five, starters who will likely begin the game at Ibrox, so there is some perspective required. The concern, however, is that all four of the attacking players brought in have already played.

It should not be the case that the conversation is once again about how devoid of ideas Rangers look without one or both of Kent and Morelos, but it’s the truth.

Malik Tillman looks the real deal and was the only bright spark for the second game running, but Rabbi Matondo and Antonio Colak were unable to get into the game. Kamara barely received the ball ahead of play the entire match and just does not look suited to playing this more advanced role.

That he was selected to start there after a summer recruitment drive suggests there is still a need for a quality creator in midfield.

Steven Gerrard had identified Joey Veerman — who scored for Rangers’ potential play-off opponents PSV in the 1-1 draw against Monaco — as his priority target, but the funds never arrived.

Rangers don’t really have that type of player, someone who can pick apart teams with vision. To take on that mantle is a lot to ask of Tillman, a 20-year-old with little experience, or academy product Alex Lowry.

Assessing the difference between Celtic’s performance on Sunday and what Rangers have served up, it is clear that the former have at least five players whose game is suited to playing between the lines, turning and knitting combinations together. Callum McGregor, Reo Hatate, Matt O’Riley, Jota and David Turnbull all possess those abilities. Rangers on the other hand have a plethora of midfield ‘tickers’ who don’t inject pace or imagination.

The front line has a wide array of options but the umbrella term for them is “direct”. Kent, Scott Wright, Fashion Sakala and Matondo are all wide dribblers; Scott Arfield and Tom Lawrence are No 10s who do their work with off-ball runs rather than distribution; and Morelos and Colak are not exactly delicate strikers.

The huge gap between Jack and the line of attackers in front illustrated the lack of a link player like Joe Aribo.

Ange Postecoglou proved last season that it only takes one or two transfer windows to transform the power balance in Glasgow. He needed to get the majority of his main signings right, just like Rangers do now, but it shouldn’t be forgotten that there were also major teething issues early on.

Van Bronckhorst has had time in the job but this is still half a new starting XI. The thing about life at Rangers, however, is there is no bedding in time. The big games don’t just come at the end of the season, the biggest ones financially come at the start. If you can’t deliver then, you’re behind the eight ball from the off.