Alabama opened preseason football camp Thursday afternoon, but it’s far too soon to make any sweeping declarations about this year’s Crimson Tide, especially on Day 1. If you don’t take my word for it, take Nick Saban’s.

“Really not much else to say out of it at this point. After one practice, you can’t really make a lot of evaluations about who did what,” Saban said. “We’ll watch the film later and kind of see where guys are and take them from wherever they are to wherever we need them to get and try to get them to commit to try to get there.”

What we did learn?

The one thing we did learn is that senior tight end Cameron Latu is shelved for an undisclosed reason and undetermined length of time, though Saban did say he will “miss some time in camp.” It was a relatively thin position to begin with. That will bring the other tight ends into focus more clearly with Latu not available. That’s certainly not to suggest that anyone will leap over Latu, because that’s not likely to happen. But it will give opportunities to other players to impress the coaching staff and earn some kind of role on this year’s squad.

Freshman Amari Niblack is one of those young tight ends for whom an opportunity exists. A four-star recruit from Clearwater, Fla., Niblack was ranked No. 146 overall in the Class of 2022 in the 247Sports Composite. Tight end can be difficult for a young player to play because of the physical nature of the position and a freshman not being in a college strength and conditioning program for long.

Niblack is more of a flex tight end, and at 6-foot-4, 225 pounds, it’s not likely he’d be asked to perform all the duties of a traditional inline tight end just yet. But from a receiving perspective, he might able to fill in in a pinch for Latu or do what Jahleel Billingsley, who transferred to Texas, did from a receiving target perspective.

Two other freshmen were part of the 2022 recruiting class, including Elijah Brown and Danny Lewis Jr. Brown is 6-foot-5, 238 pounds and Lewis is 6-foot-5, 255 pounds. All three freshman tight ends, in addition to sophomore Robbie Ouzts, will see their reps increased with Latu sidelined at least temporarily. 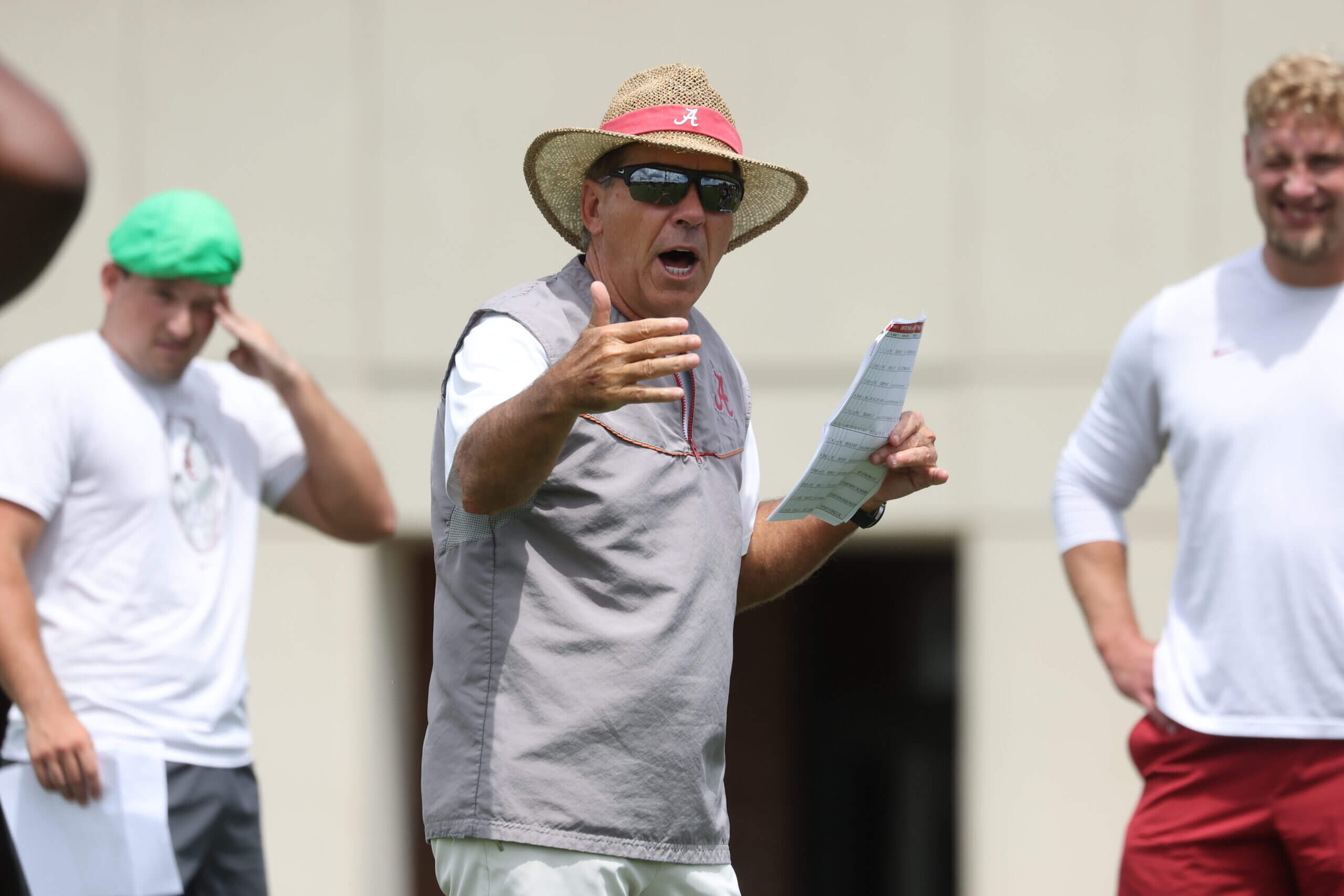 The other newsworthy bit of the start of practice overlapped with something an in-state subscriber asked in my mailbag recently: Was 2021 a rebuilding year for the Crimson Tide? I answered affirmatively, and it didn’t really seem like that controversial of a position to take. The 2020 team lost six players in the first round of the NFL Draft. It was a historically great college team. How could the next season not have been a rebuilding year?

That topic was brought to the foreground again this week with Saban himself publicly saying it was a rebuilding year. That set off a national discussion about whether or not a team that won the SEC championship and played for a national championship could possibly be rebuilding. Saban clarified his position Thursday and added that he hoped last year’s shortfall weighed on the minds of every player for this season.

“Well, I don’t understand what’s so hard to understand,” Saban said. “The point being, we were young and we should have nine starters back on offense and nine starters back on defense. That’s the point I was trying to make. Six guys went out for the draft, so as we usually have to do, we have lots of rebuilding to do again this season. So that’s the point that I was trying to make.

What we don’t know yet

While everyone is rightfully going to focus on the offensive line, there’s another position battle taking place that is competitive and not drawing as much attention.

When Eli Ricks transferred from LSU, most college football analysts went ahead and scribbled his name as a starter on the depth chart. But it hasn’t exactly played out that way. Khyree Jackson, who was a starter in the postseason last year, isn’t so keen on giving up the job he got a taste of last year. Throw Kool-Aid McKinstry into the mix, and Alabama has a lot of good options for its two starting cornerback spots.

It really isn’t all that surprising for those who followed spring practice. Saban said multiple times that learning a new defense as well as coming back from an injury that created both missed time and weight loss was a hurdle with which Ricks was having to deal. But in the next three weeks, decisions will be made for that starting jobs, with the two preseason scrimmages, as well as daily practices, acting as the determining factors.

It’ll be a key storyline throughout preseason camp.

The offensive line hasn’t been solidified yet, either. Until then, it’s perhaps the thing fans will fret over most until they see the results. Saban saw enough last year. He saw a unit that was far off the performance of previous units. They weren’t as physical. They weren’t as skilled. They weren’t as nasty.

“I don’t think there’s any question about the fact that we need to play better on the offensive line,” Saban said. “We need to be more physical up front, first of all, and get movement on the run. Getting more consistent and I think having more diversity in the running game would also help. I think the additions we made in the offseason are going to be helpful to that.”

Saban mentioning the diversity in the run game is interesting. Perhaps some offseason self-scouting revealed a too-predictable pattern of running the ball. With Jahmyr Gibbs transferring in from Georgia Tech and Jase McClellan and Roydell Williams back from injuries, it certainly feels like this group of running backs is a little more multiple than last year. That’s not to take anything away from Brian Robinson, a third-round pick who was great last year, but the strength of his game was as a north-south runner. Gibbs is truly a special running with his ability to make defenders miss.

Toughness was another area Saban highlighted with the offensive line.

“I think overall, we just have to have a different mentality up front in terms of the intangibles that we play with,” he said. “The toughness, the effort. The offensive line is a place where that gets established on your team. We need leadership so that the players actually understand the standard we need them to play to and somebody who is going to not accept the fact that guys aren’t playing that way. But I like the players that we have. I like the attitude they have sort of played with to this point.”

That’s not easily established until the players put on pads.