“He has a strong personality. He never hides, he asks for the ball and dares.”

Lille’s rising star is just 20 years of age (for another 10 days) and has played fewer than 1,400 minutes in a single season in one of Europe’s big five leagues. Yet Premier League clubs West Ham United and Everton are competing to sign the midfielder valued at around €30million (£25.3m, $30.5m), with the latter leading the race and confident of completing a deal.

Despite his limited senior-level experience, Onana’s quality is such that has already been given a senior international debut by Martinez – aged 20 years, nine months and 18 days — against the Netherlands in the Nations League in June.

A move to the Premier League would see Onana walking a well-trodden path.

Of the top five European leagues, France’s Ligue 1 is the top exporter to the English top flight. And fellow central midfielders Yves Bissouma and Boubakary Soumare both worked their way through the ranks at Lille before joining Brighton and Leicester City respectively, with Bissouma moving on to Tottenham this summer.

The Athletic looks at what Everton or West Ham could be getting.

Positionally, Onana looks like a ‘spider’ due to the high volume of minutes he’s played as a deep-lying midfielder, but in his 13 starts across Ligue 1 and the Champions League, he primarily lined up as a left or right central midfielder in a 4-4-2.

Everton are understood to admire his midfield versatility and box-to-box ability — an example of that is that he played as a No 10 away to Chelsea in the first leg of a Champions League last 16 tie in February. 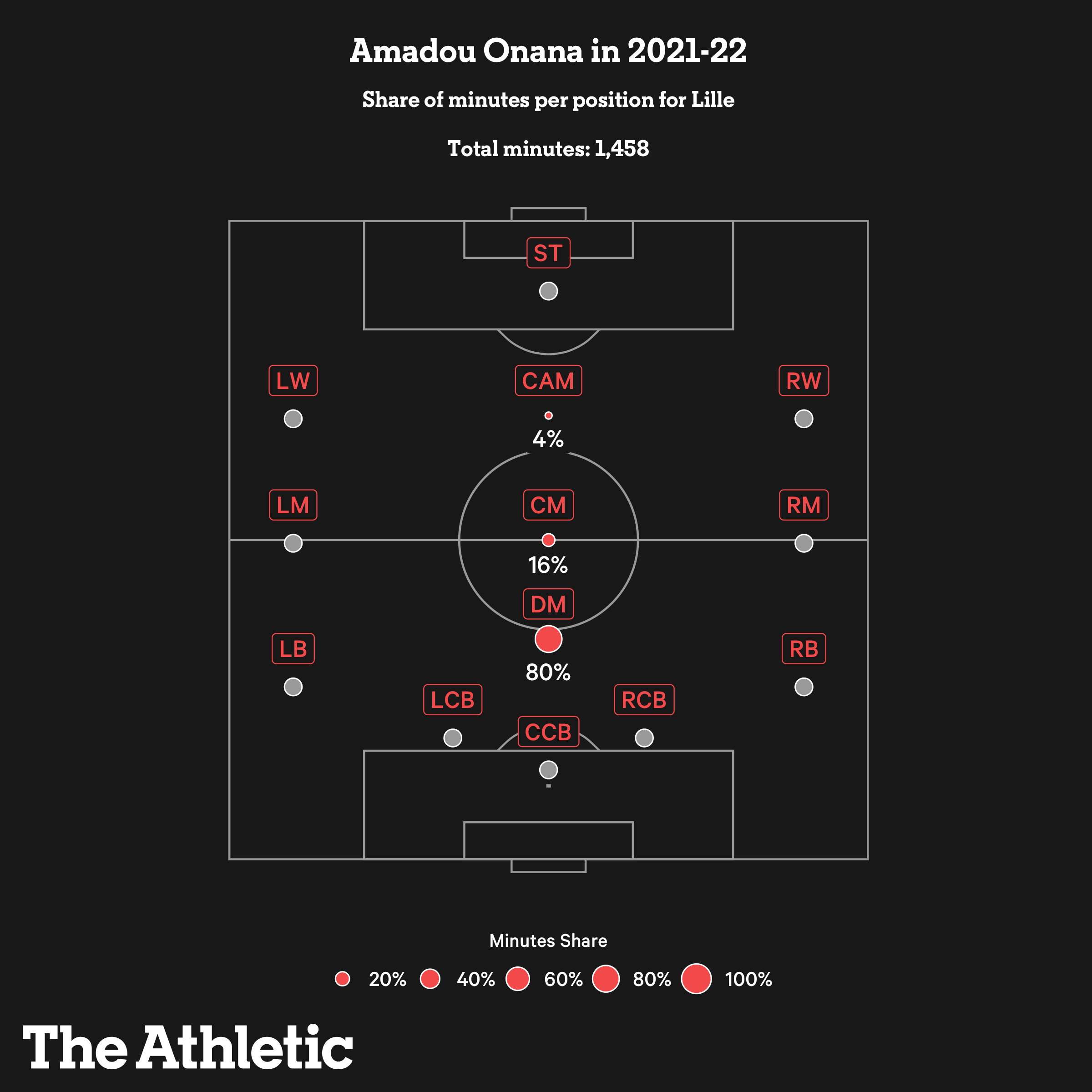 Playing as ‘the destroyer’

Of the five personalities listed above, Onana is mostly a ‘destroyer’.

Using smarterscout data — which gives players a rating from zero to 99, relating to either how often they perform a given action compared with others playing in their position (such as ball recoveries and interceptions) or how effective they are at it (for example, how well they progress the ball upfield) — we can take a closer look at his profile.

His resulting pizza chart below indicates Onana — who was still 19 when last season began — is strong in an aerial duel (94 out of 100), which is unsurprising given he is 6ft 5in (195cm) tall. He also ranks highly for defending intensity (69 out of 100) but even better for his defensive impact (89 out of 100).

This points to an active style of defending through pressure and tackles. 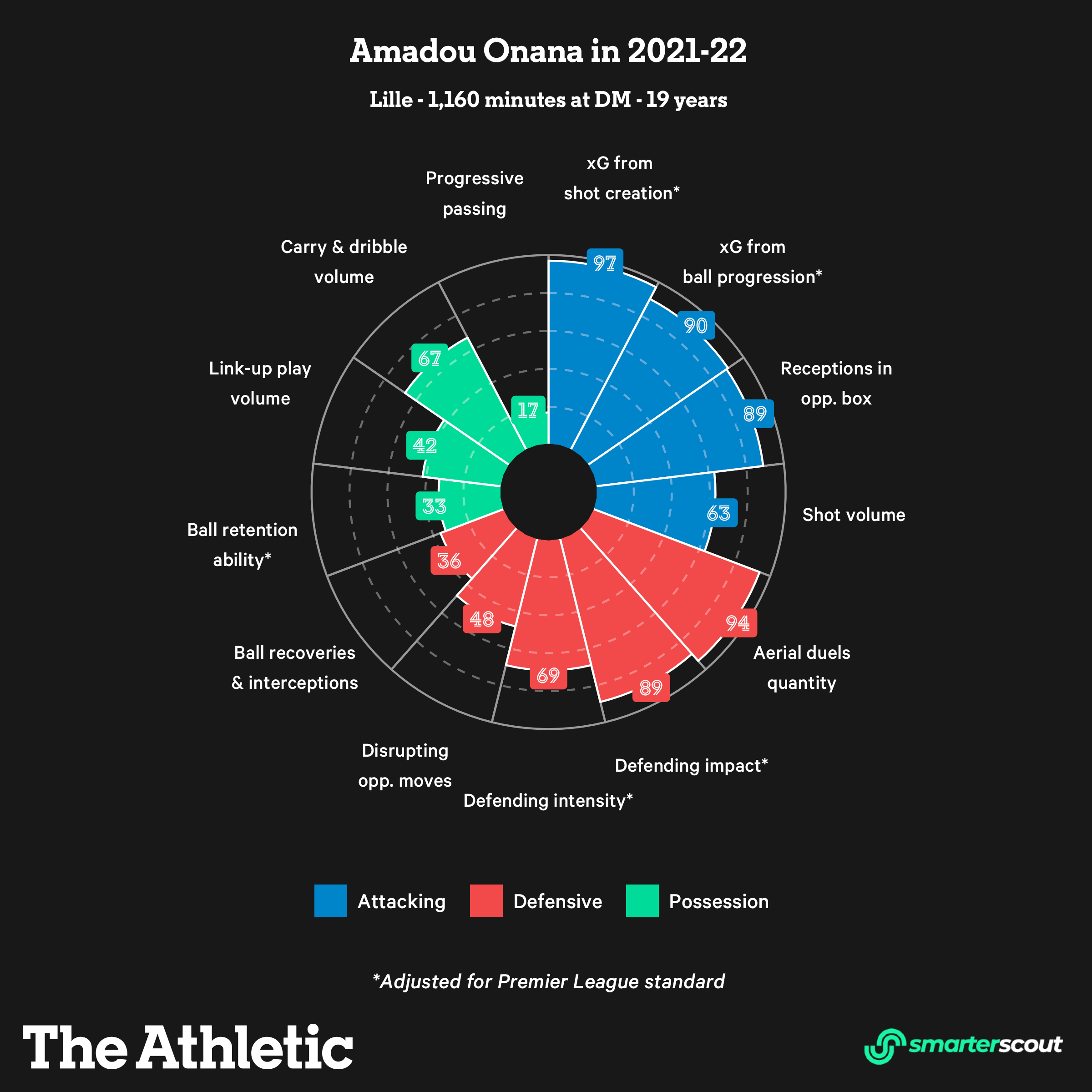 Underpinning these impressive numbers is his tackling technique.

Onana frequently makes clean sliding tackles but in a slightly unorthodox manner – most players would use their foot farthest from the ball and try to sweep that leg across, he uses the foot closest to it and tackles with the toes.

Exhibit A from March: a Saint-Etienne midfielder breaks through the Lille midfield… 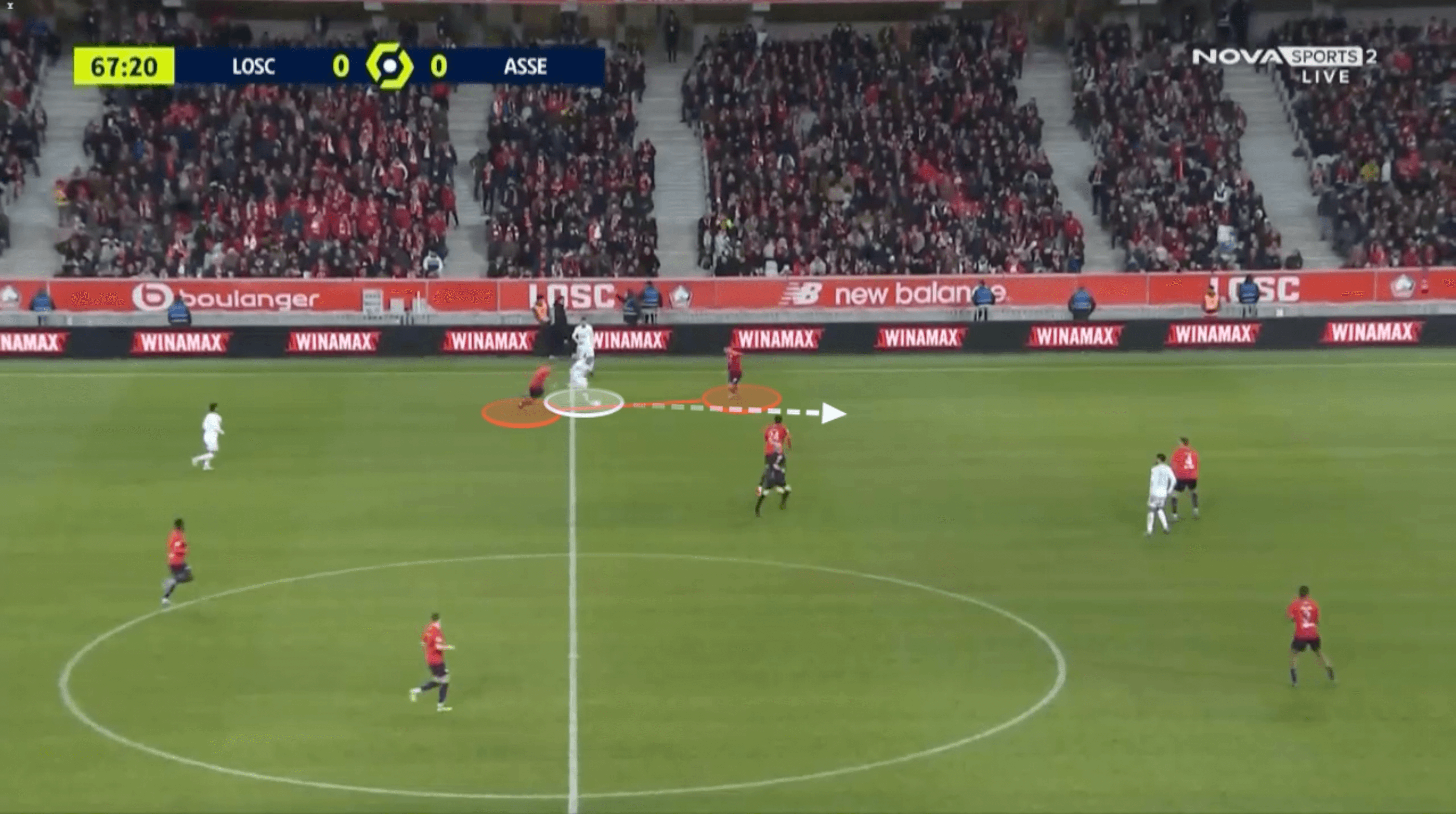 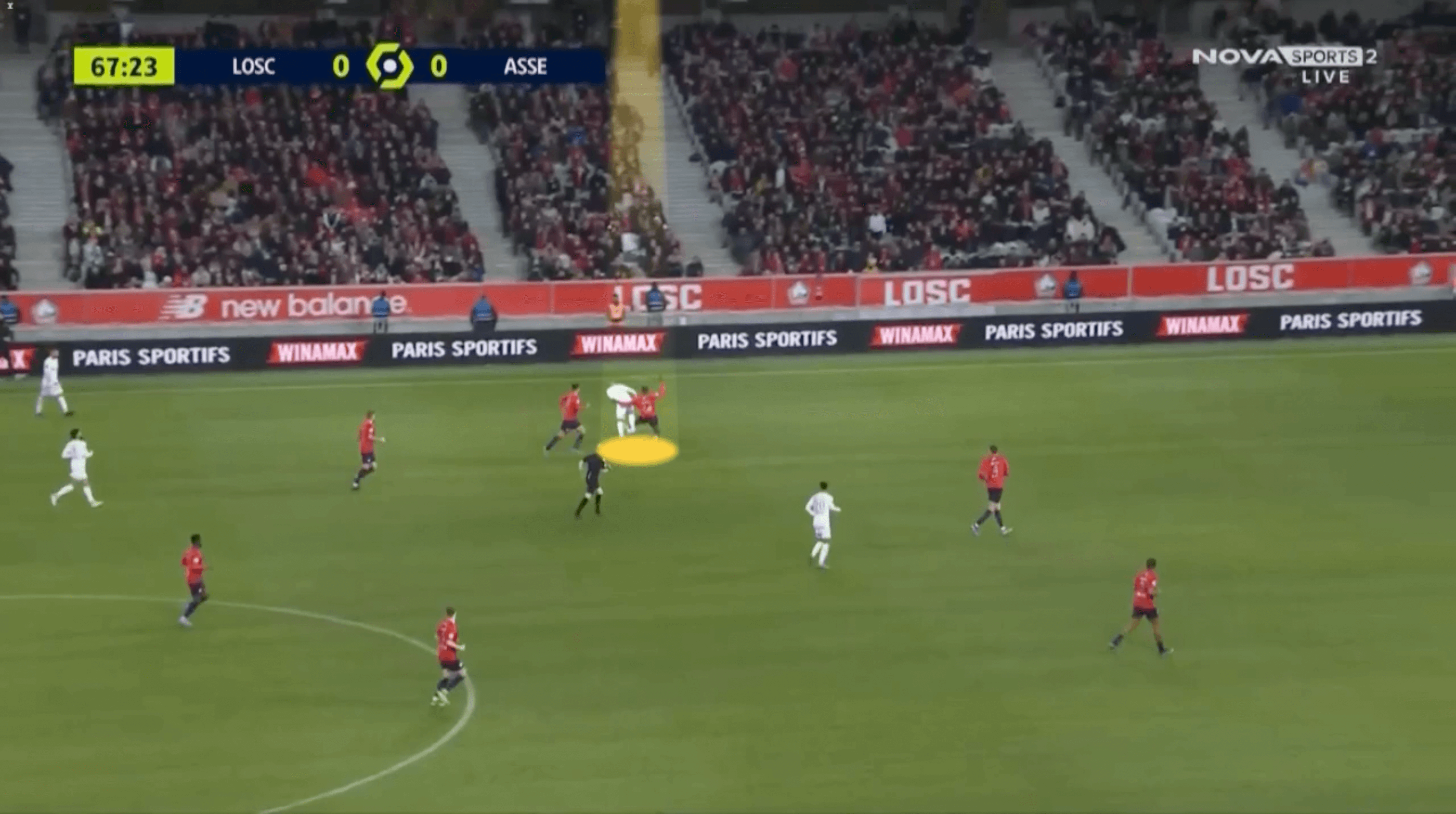 …before spotting a forward pass up to Jonathan Bamba, bypassing three opponents at a stroke. 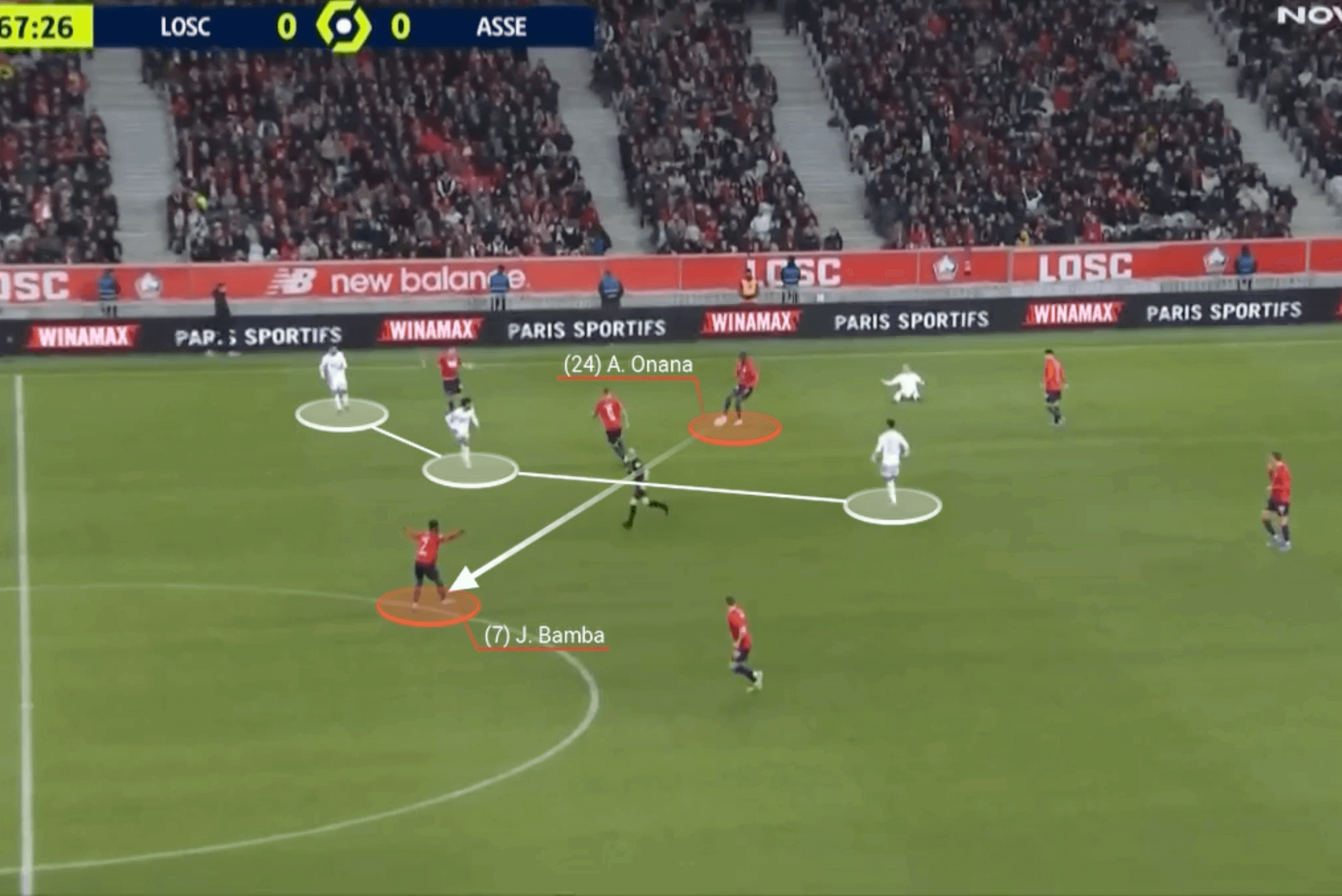 Similarly against Bordeaux three weeks later, Ricardo Mangas gets away for the visitors but Onana is once again covering. 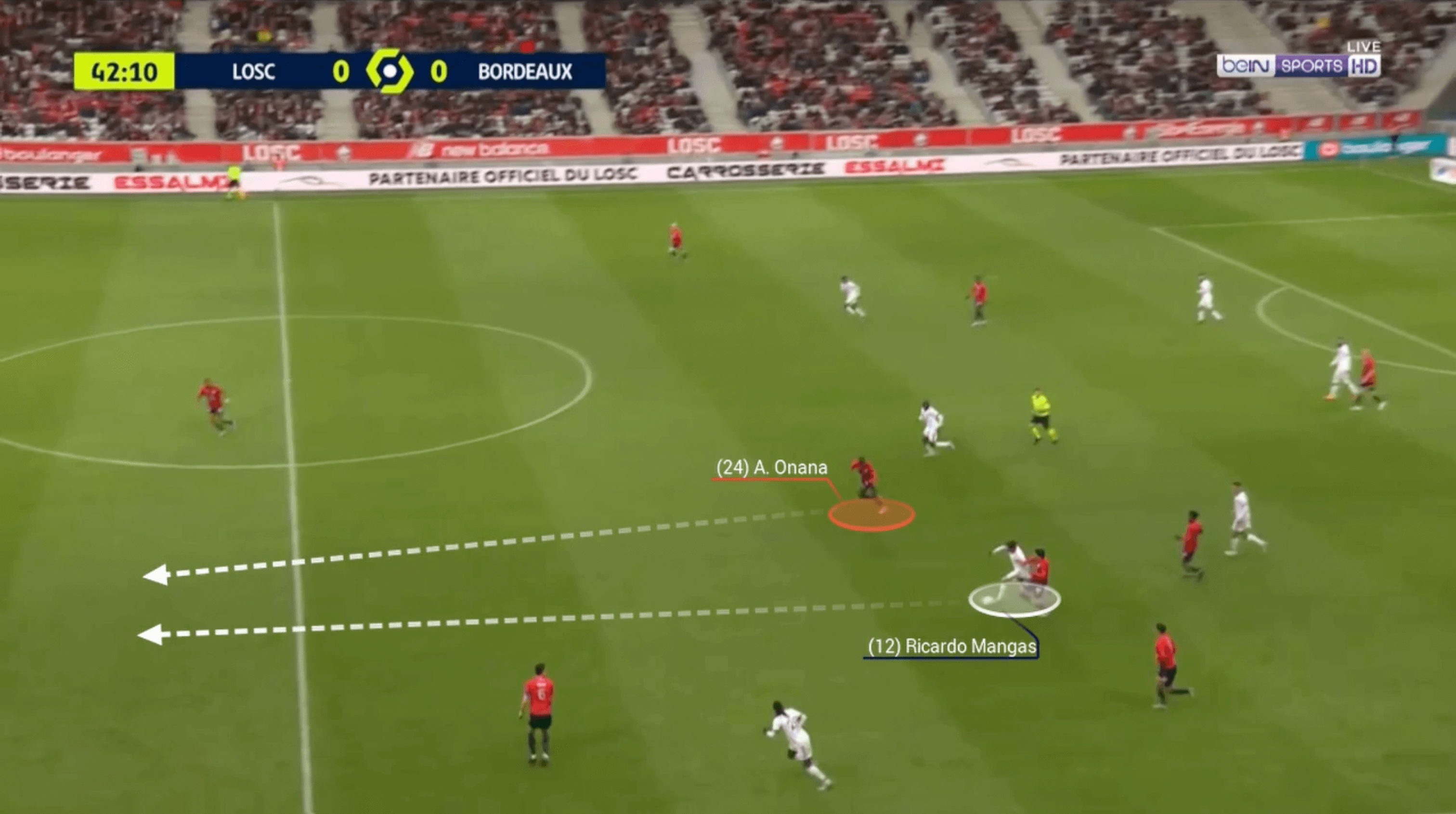 He uses his speed to match Mangas’ run and again tackles in his own unorthodox style. 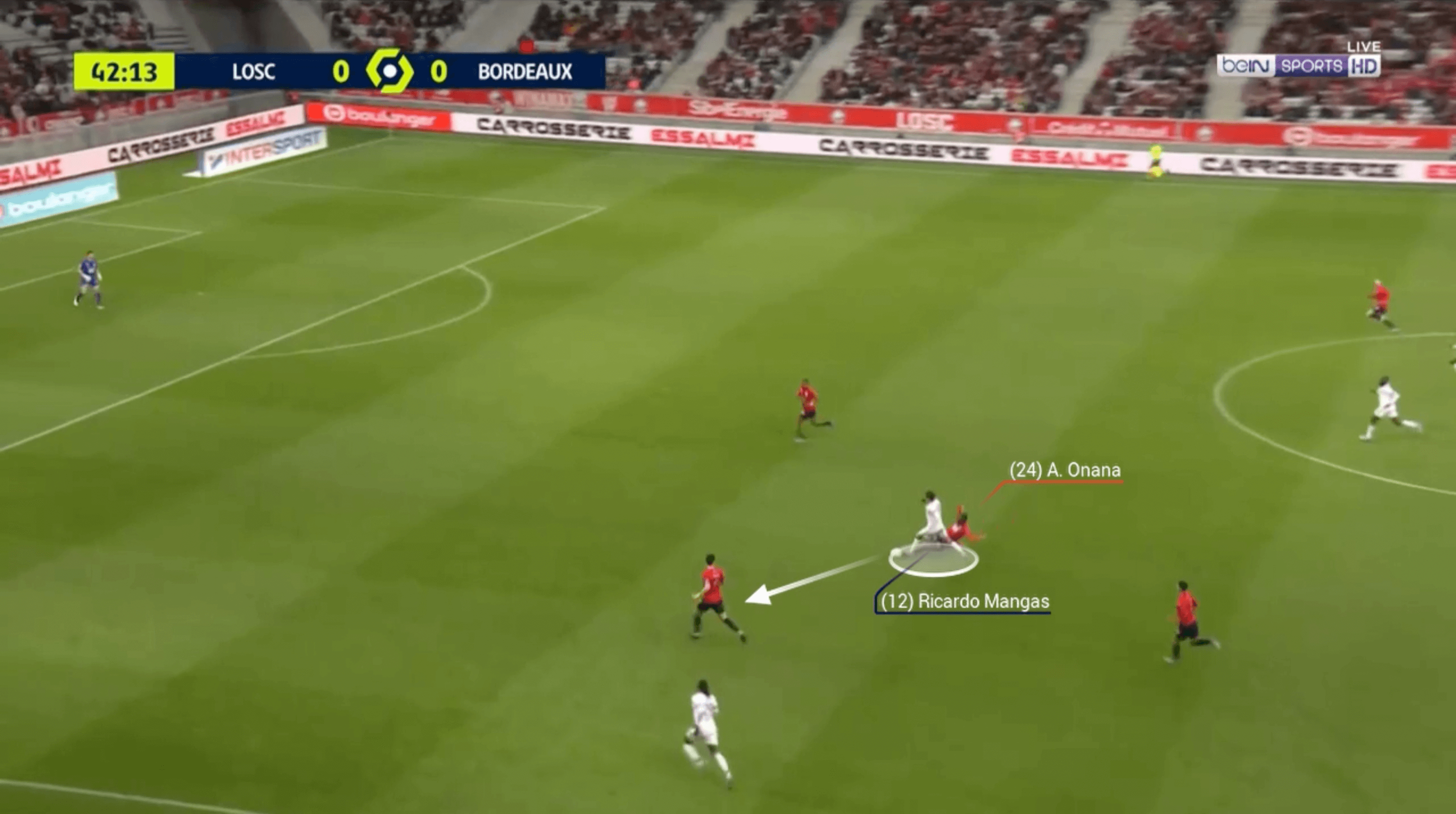 He also ranked in the top six per cent of Ligue 1 central midfielders last season for the fewest times he got dribbled past (0.66 per 90 minutes).

Everton like Onana’s dynamism, intensity and physicality and believe he would offer something different to the current options in their squad.

Playing as ‘the spider’ and ‘the passer’

His pizza chart shows impressive rankings for key attacking metrics (the blue parts) but paints him as a below-average player in possession (the green ones) — aside from ball carrying (carry & dribble volume: 67 out of 100).

His current limitations lie in his team’s organised build-up. Onana does not always take up quality positions and is often easily marked out of the game – although this could also have been a Lille tactic to build attacks through different players and areas.

There is work to be done on his body shape as he receives passes and his spatial awareness to recognise pressure.

A statistical comparison to last season’s central midfield partner Renato Sanches illustrates where Onana has room to develop. Though – as recommended by Beale – clubs will naturally use a variety of playing profiles to structure a midfield, so style as well as ability shapes these numbers.

An example of his possessional limitations came that February night at Stamford Bridge.

Here, he pulls wide to receive a pass from centre-back Sven Botman, with Chelsea defending in a mid-block. 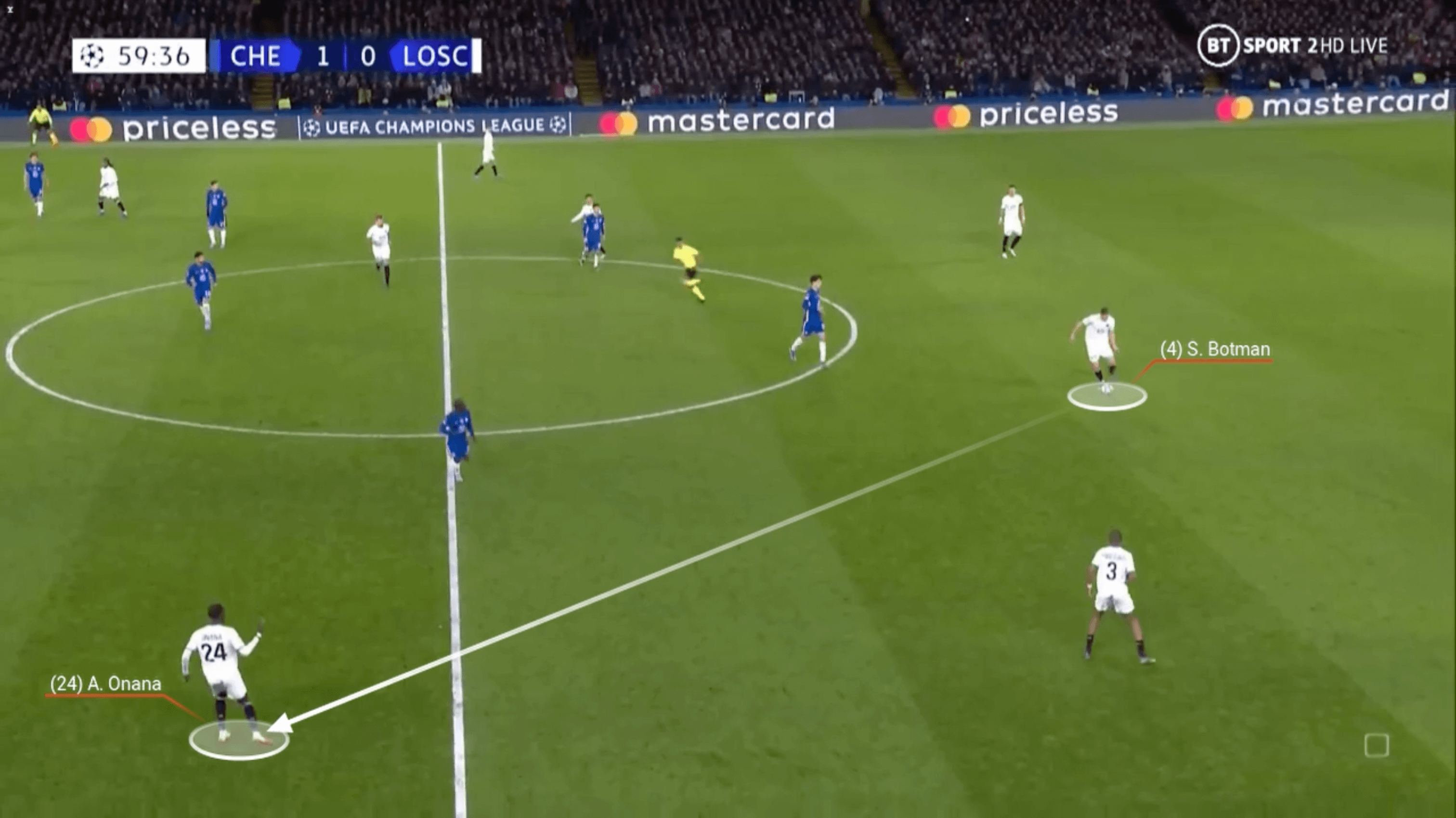 Onana does not check over his left shoulder and so fails to spot the onrushing Cesar Azpilicueta, who tackles him… 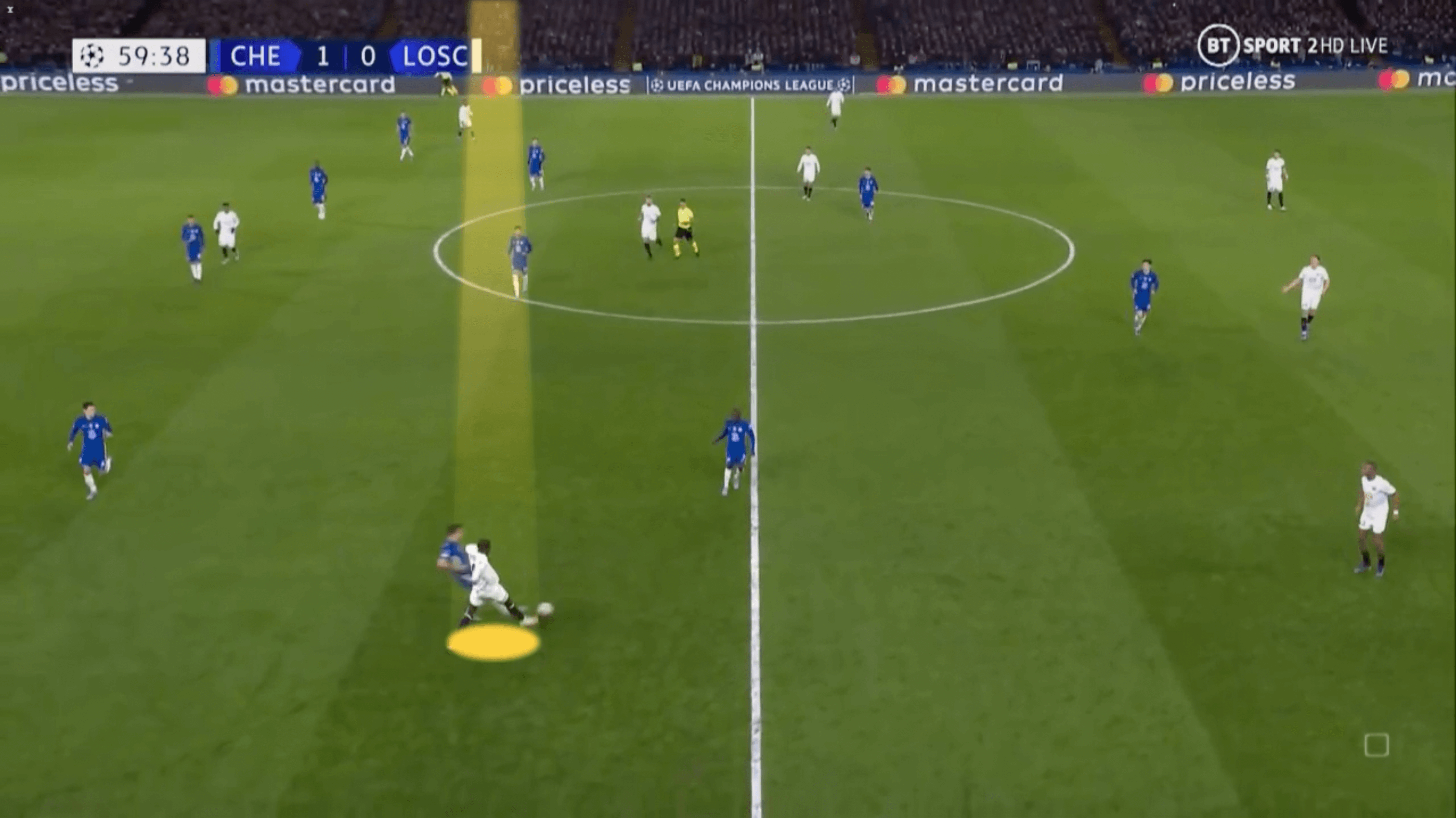 … and suddenly Lille have a transition to defend. 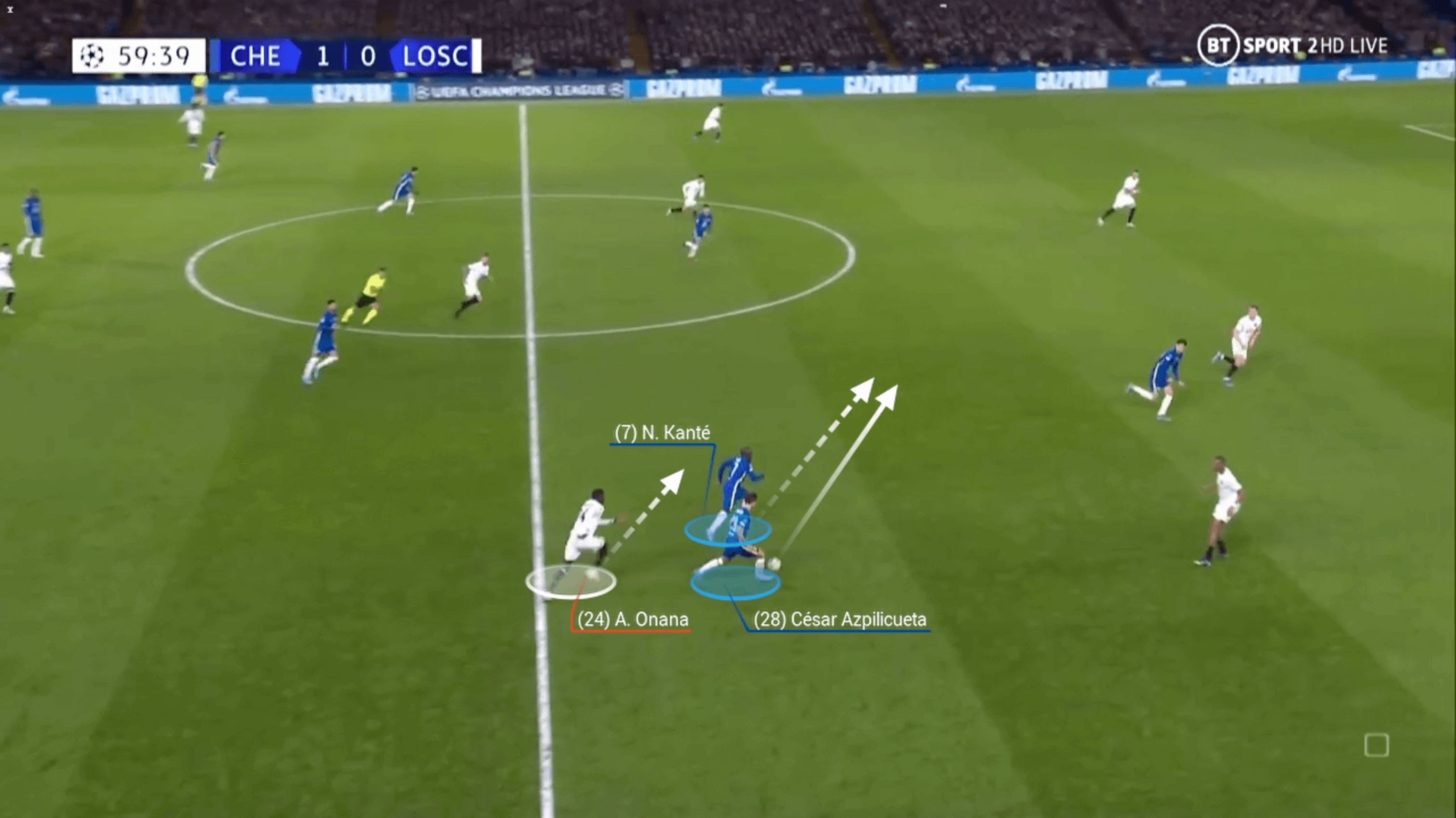 … and gets back to cleanly tackle the Frenchman, again with the foot nearest the ball (his left). Lille have possession again. Danger averted. But this sequence highlights his imperfections in possession. 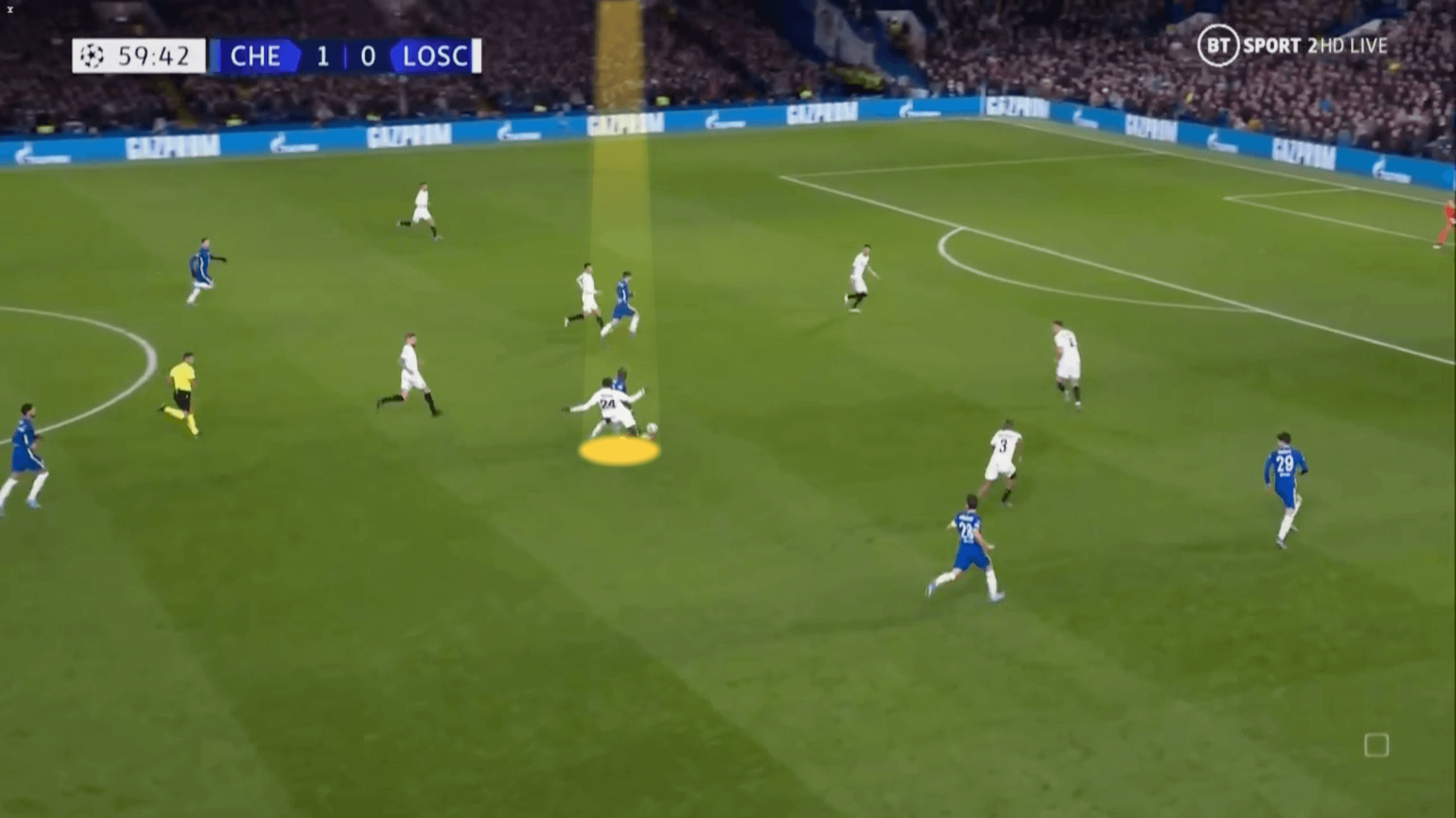 These points are us being hyper-critical, though. As mentioned earlier, Onana made only 13 starts for Lille (he came off the bench 27 times) after being signed from German second division side Hamburg last summer and is still five years off the typical peak age for a central midfielder.

While being a solution to the high press is not a feature of Onana’s game, he is showing a penchant for hitting a through ball.

Here, while captaining Belgium in a European Under-21 Championship qualifier last October, he beats a Denmark defender to an aerial ball and heads it forward… 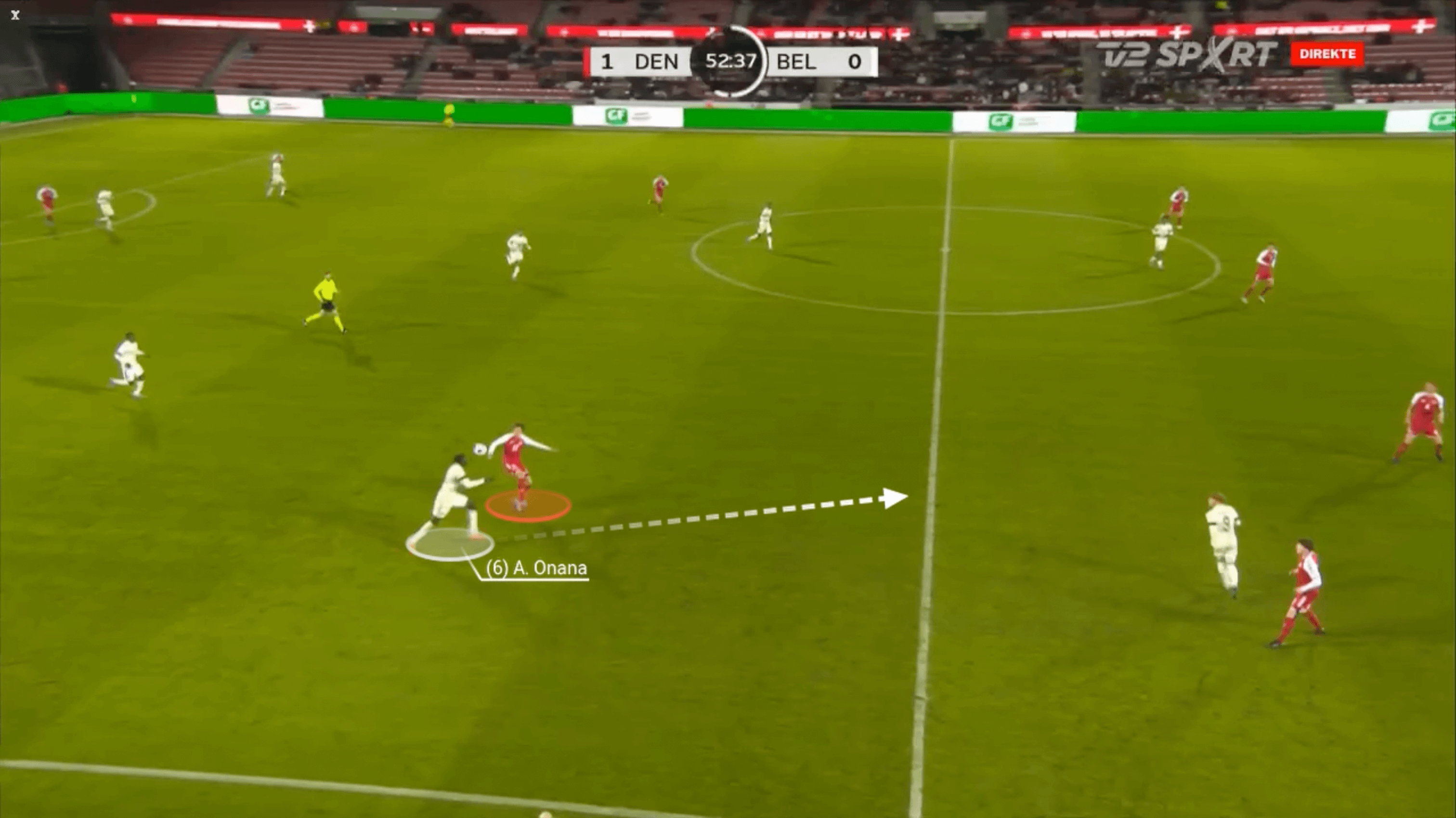 … then regathers the ball and dribbles upfield until a passing angle opens up. Side-footed, he then finds Lois Openda running in behind, who equalises. 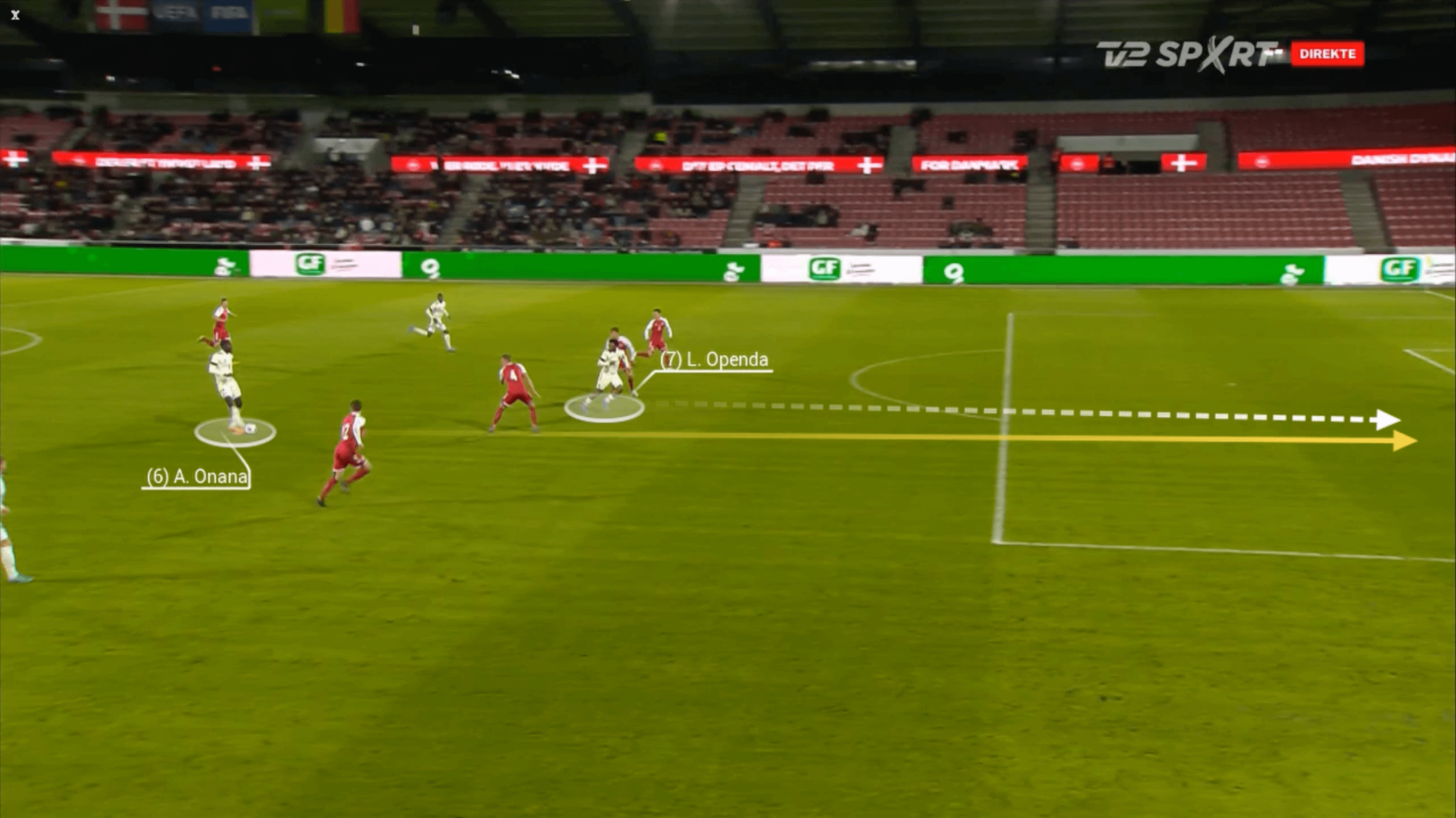 Onana dribbles between two opponents to create the space for a slide-rule pass to Zeki Celik, who scores Lille’s final goal of a 3-1 win.

Up against a high line with the space to dribble and facing the opposition goal, Onana can offer serious quality. And any shortcomings in his deeper build-up play are unlikely to be significant issues for the clubs interested in him.

West Ham and Everton are not dominant build-from-the-back teams — last season, Everton were second (69.9 per cent) and West Ham fourth (56.2 per cent) for the proportion of goalkeeper passes that were deemed to have been launched (travelled 40-plus yards).

Onana’s two goals in the next round of the Coupe de France against Lens in early January were typical of his play style. He was not involved in the build-up for either one but used smart movement to get into quality shooting positions – his xG per 90 of 0.16 ranked him among the top 10 per cent of Ligue 1 midfielders last season.

The first goal, to put Lille 1-0 up, is a header — Tiago Djalo’s cross from the right finding him at the back post. 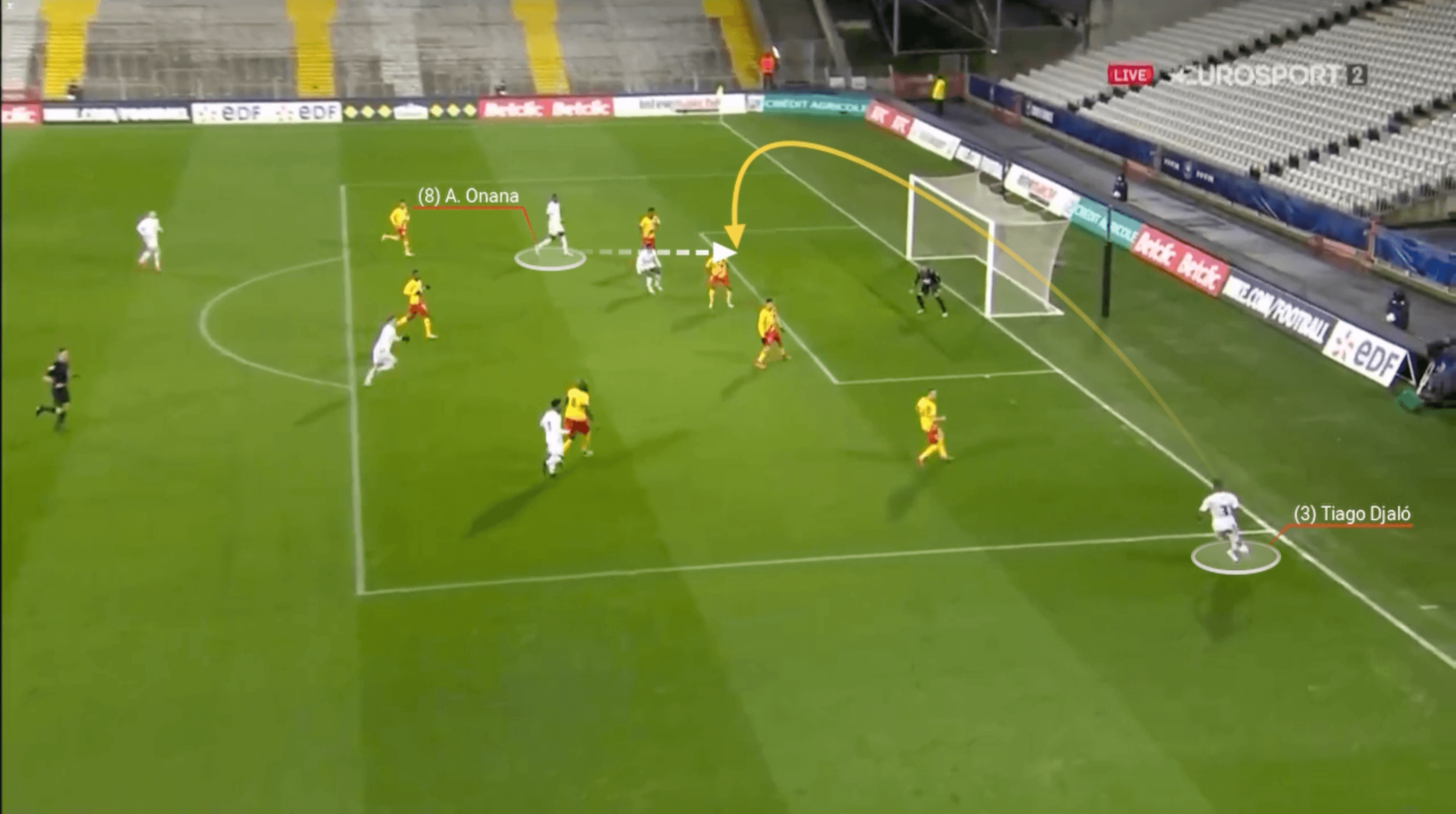 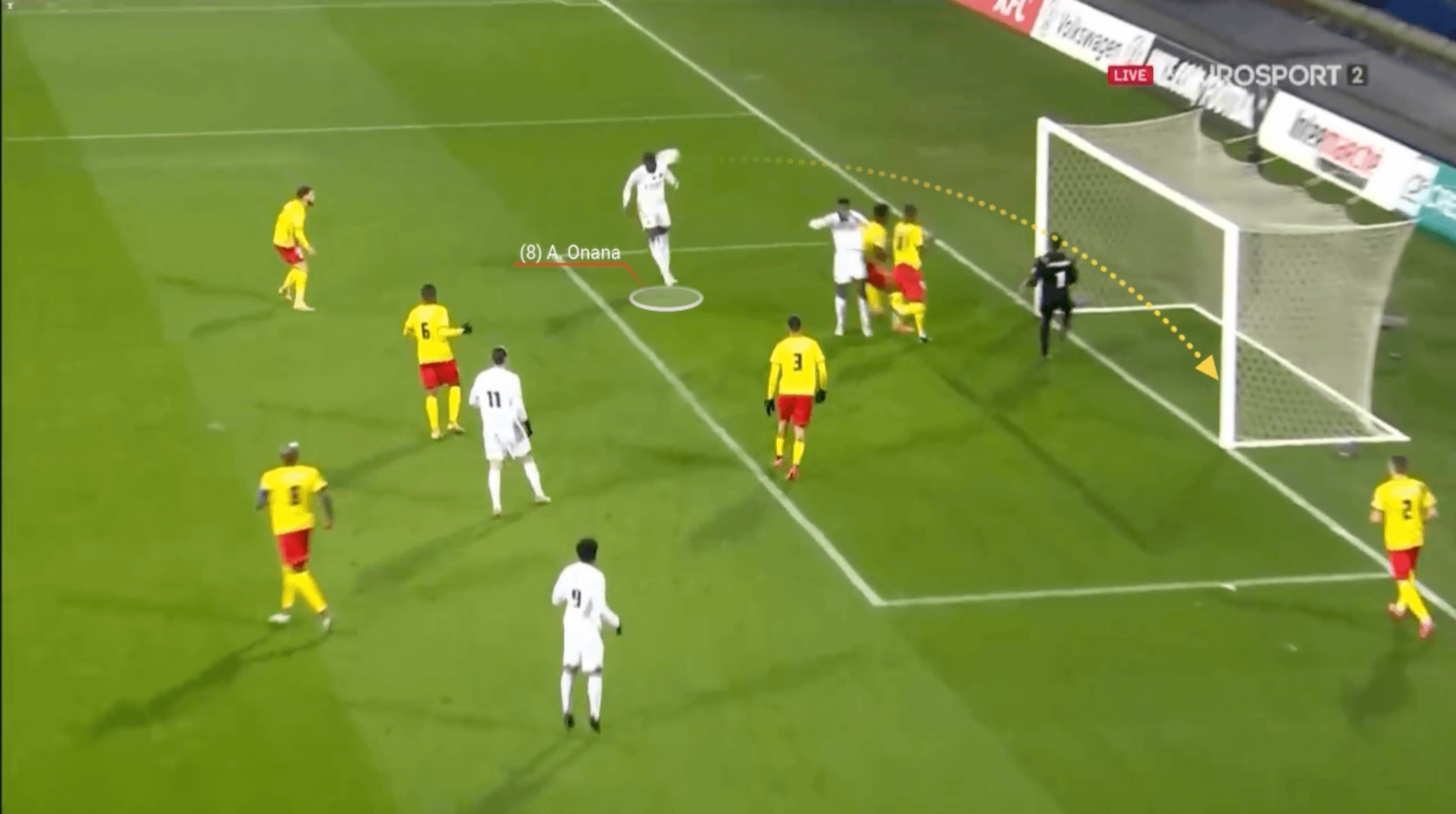 The second goal shows slicker movement. Onana describes himself as a box-to-box midfielder, and as Lille attack quickly from deep, he makes a late run to finish the move off with two touches.

Another Onana assist on an Openda goal came away to Turkey Under-21s in Euros qualifying last September.

Operating as the defensive midfielder, Onana sees the Turkey right-back shaping to pass centrally, intercepts right-footed then, instantly, with his left slides Openda through to double Belgium’s lead.

An even better example can be found in Lille’s Champions League group-stage win away to Wolfsburg in December.

Onana spots goalkeeper Koen Casteels shaping to play a wedge pass to the left-back and presses – he recovers the ball in the final third and passes infield to Timothy Weah. A couple of seconds later, the French visitors have gone 3-0 up.

“I think it is more about the different attributes and different types of midfielders, potentially, and to have a squad that we can look at and say, ‘We are as balanced as we can be’,” Everton manager Frank Lampard said last weekend when discussing their transfer activity following the club’s final pre-season friendly, against Dynamo Kyiv.

StatsBomb data, via FBref, ranks Everton’s Abdoulaye Doucoure as the sixth most statistically similar central midfielder to Onana over the past year. As highlighted in Patrick Boyland’s recent review of Everton contracts for The Athletic, there are central midfielders aplenty at Goodison but what they lack at the position is quality and players on long-term deals.

Stylistically, Lampard wants a midfielder who can operate deeper, receive the ball under pressure and support the build-up. Allan is the only central midfielder currently on the books to rank above the Premier League positional average in ball progression (progressive passes and progressive carries) and tackles.

Everton are still looking to re-sign their former defensive midfielder Idrissa Gueye from Paris Saint-Germain and want both a No 6 and No 8 before the summer window closes on September 1. Gueye naturally plays deeper — more of a spider — and at 32 (33 next month) he would be a good football mentor for Onana, as well as mitigating any of the youngster’s stylistic shortcomings.

And then there’s the fact that if Onana moves to Goodison Park he would also be learning from Lampard — one of the best central midfielders ever.

Blind date: ‘Best thing about him? He let me have a cube of his tofu’