How useful is a 1-1 draw away to Middlesbrough for West Bromwich Albion manager Steve Bruce?

Over a 46-game Championship season, with a condensed schedule resulting from this year’s winter World Cup, there are very few opportunities for the coaching staff to assess and improve on the training ground.

With eight matches scheduled between the start of the season and the beginning of September – and the potential for another if they progress past Sheffield United in the first round of the League Cup – every day is a school day for Bruce and Steve Agnew, the assistant head coach, as they pivot to using a back four.

While the players are still finding their feet ahead of the new campaign, last Saturday’s trip to the Riverside offered the coaches the opportunity to test their side against a back three, of which 17 Championship sides used a variation of on the opening weekend.

Bruce inherited a squad conditioned to play in Valerien Ismael’s high-pressing, quick turnover, three-at-the-back system, which struggled to transition into a back four. He has been open throughout pre-season that he had tried to implement his preferred back four too quickly after taking over in February, which was underlined by him losing four of his first five matches as manager.

And for the first 45 minutes on Tyneside, they were comfortably second-best.

Chris Wilder’s system did not throw up many shocks – his favoured 3-5-2 with attacking wing-backs – but their execution and ability to connect attack and defence through the lines bypassed a stationary Albion midfield with a disorganised press.

Here is the build-up to Middlesbrough’s opener. Albion are in a 4-5-1 settled shape, with wingers Matt Phillips and Jed Wallace slightly more advanced than the midfield trio of Jake Livermore, Jayson Molumby and John Swift. Swift will typically play as a No 10 this season but started deeper to match the opposition’s midfield three.

As detailed below, there are three opposition players between the lines, an early sign of danger if one of Middlesbrough’s deep ball-progressers, Jonny Howson in this case, can squeeze a pass through. Still, at this moment, there are no immediate problems in Albion’s settled shape. 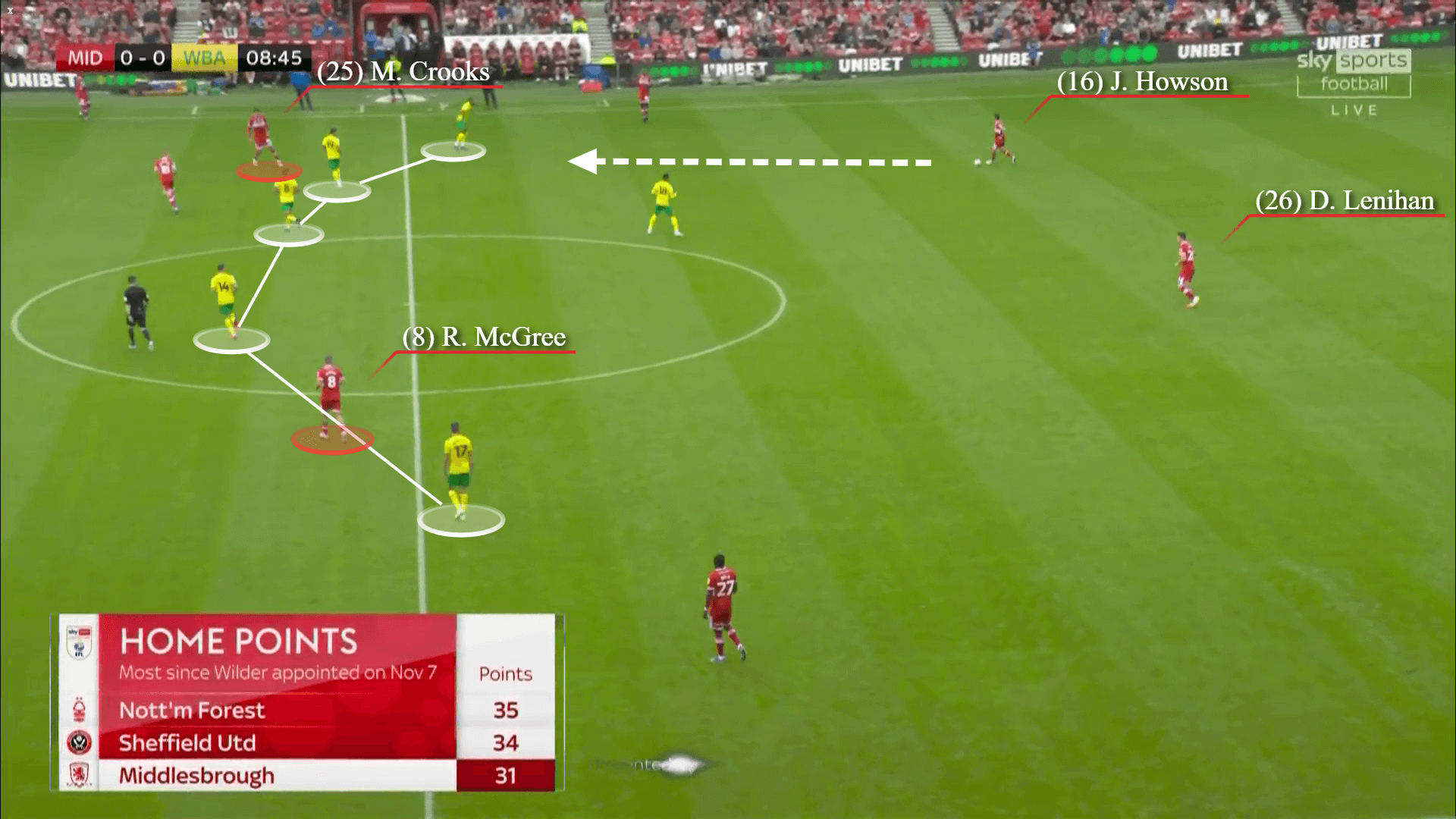 Fifteen seconds later, Howson receives the ball from Darragh Lenihan on the half-turn, with Albion’s midfield line deeper inside their half and on the right side of the pitch.

Chuba Akpom makes a darting run into the open space, prompting Dara O’Shea to track his run and vacate a hole where the centre-back would typically defend. 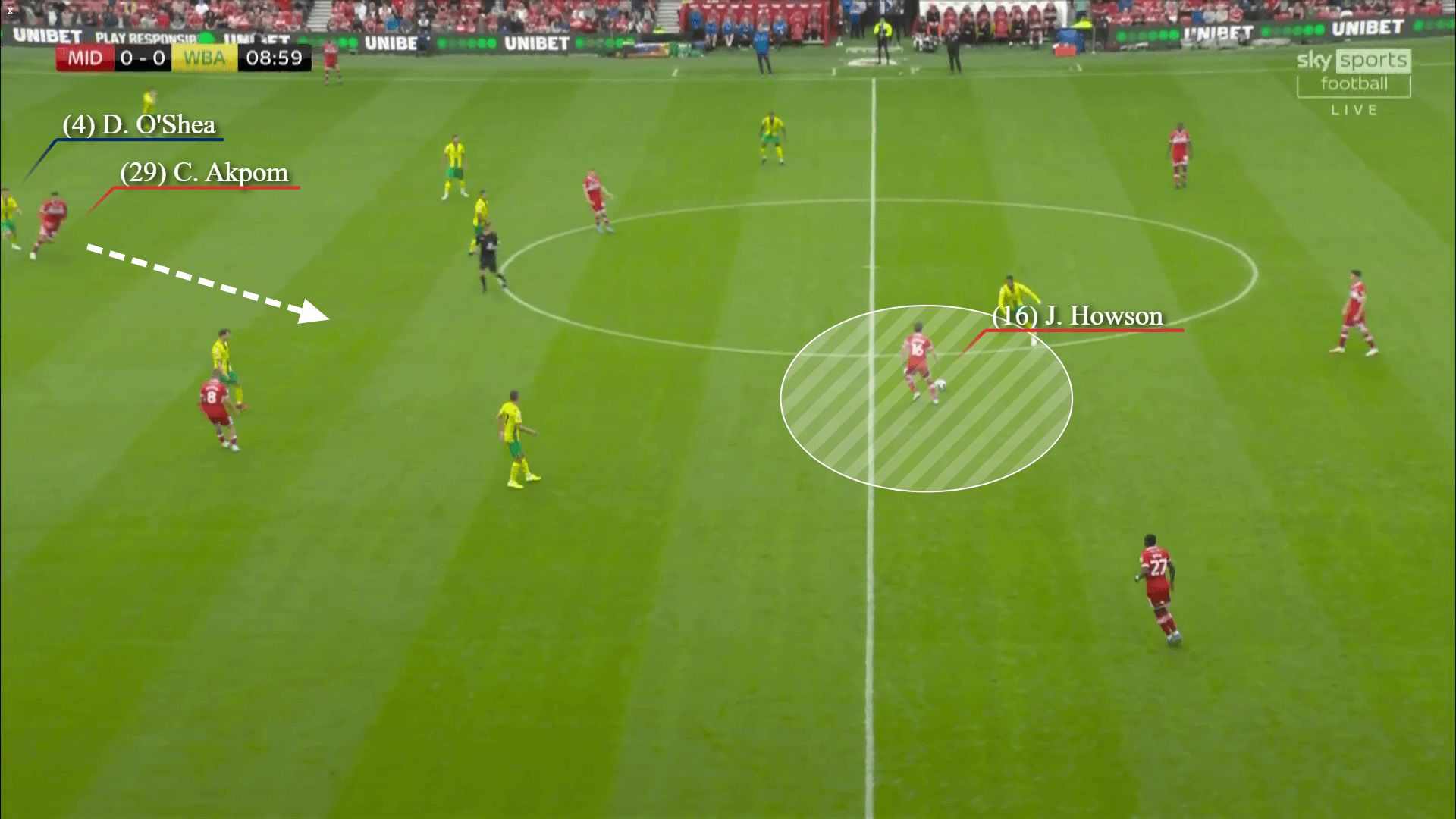 While nothing comes from this attacking phase, leaving gaps between the lines against a Wilder side invites Middlesbrough’s attack-minded midfield of Matt Crooks and Riley McGree to occupy these areas.

Howson finds McGree, whose pass intended for left wing-back Ryan Giles is intercepted by Darnell Furlong before Howson regains possession and feeds Giles on the left.

Due to McGree’s overlap on the left, Giles has the space to dribble inside and slide a pass into Akpom’s diagonal run behind Ajayi, who is caught between engaging with the ball and staying in position. 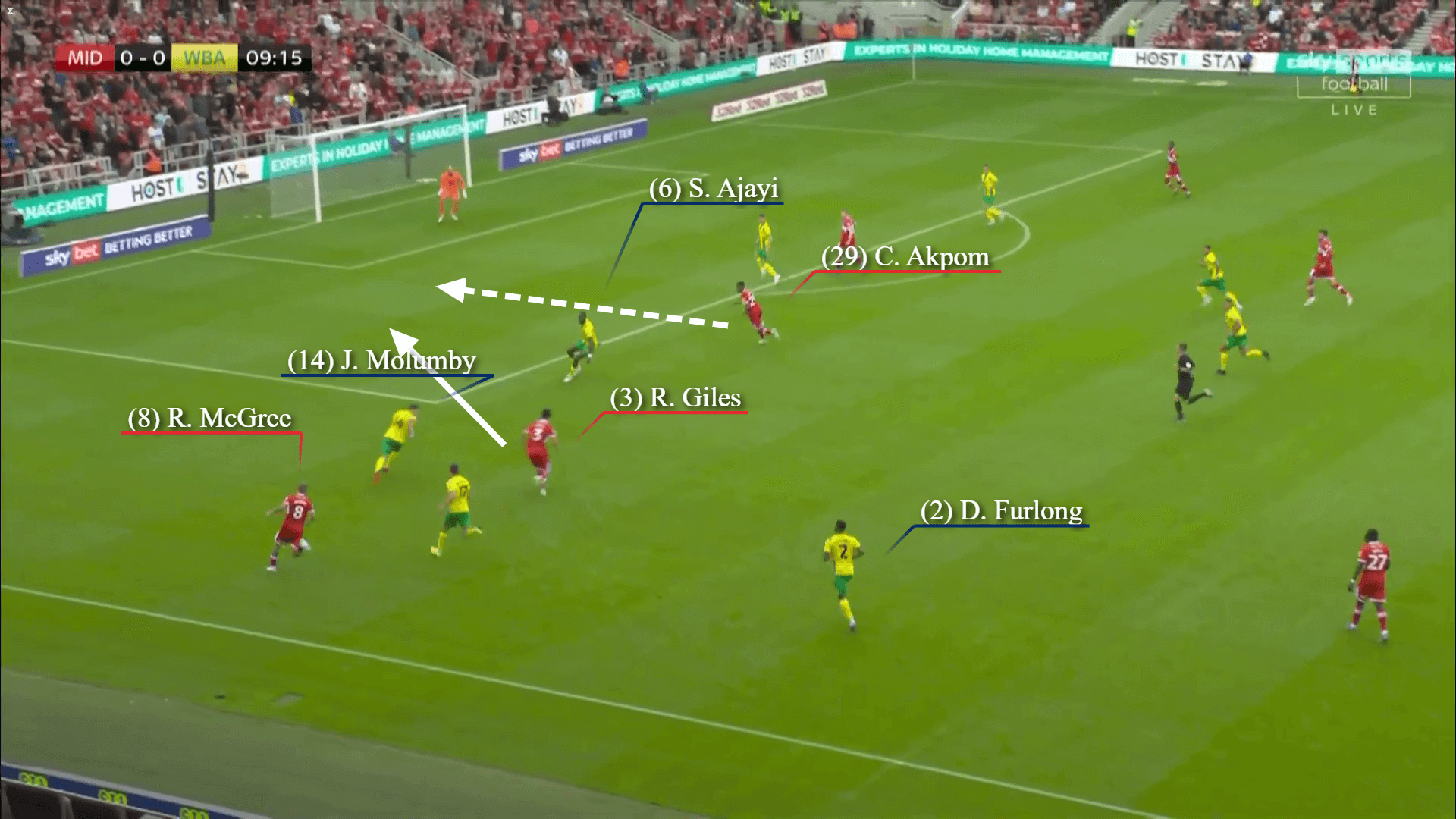 Akpom then slides the ball across the box for an unmarked Isaiah Jones, whose run has not been tracked by Phillips, to tap home. 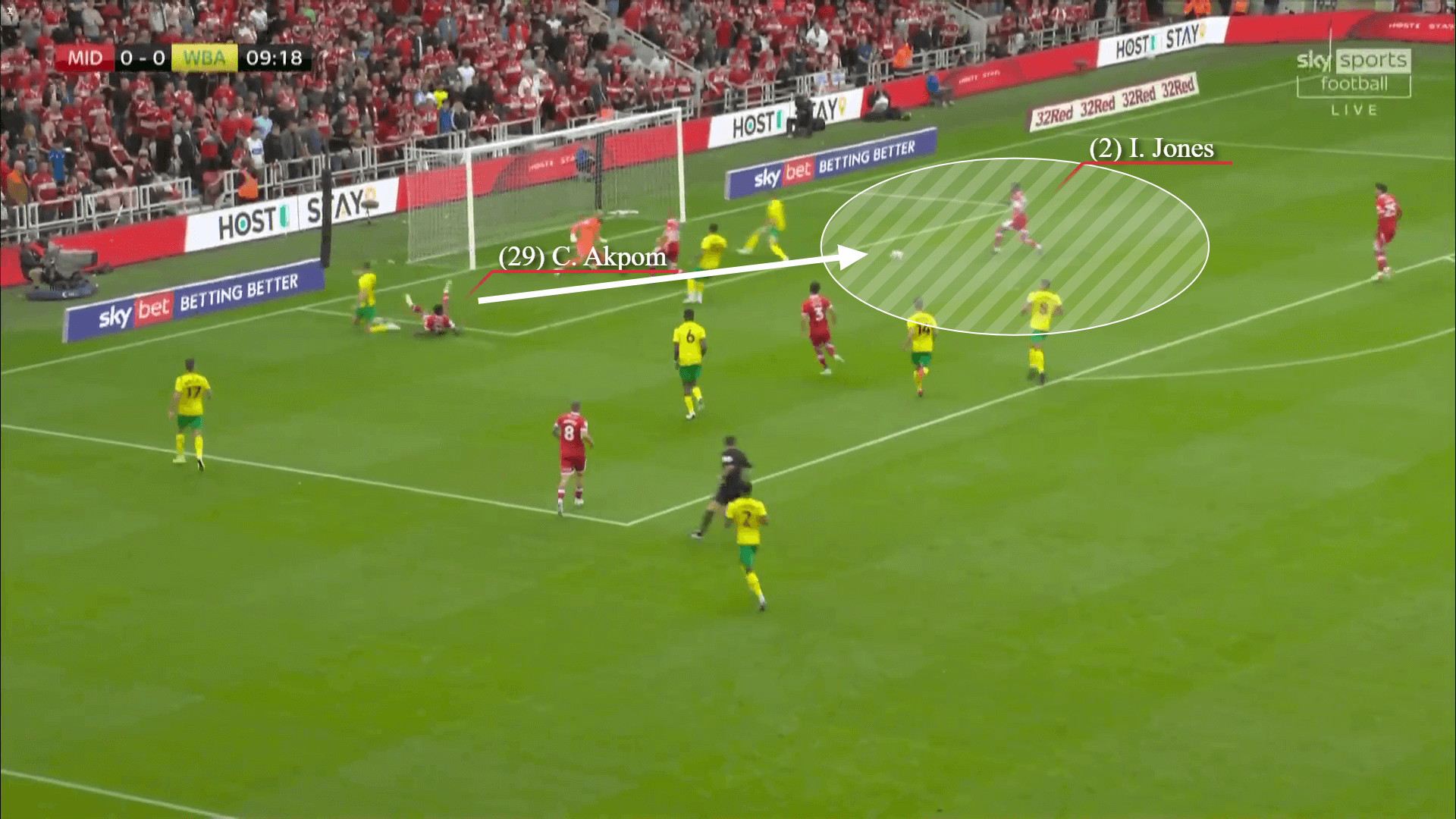 It was a goal born out of line-breaking passing to direct midfielders, mistakes in possession and overloads in wide positions – typical ingredients of a successful Wilder side.

The home side almost added another in similar circumstances later in the first half.

Without pressure, Lenihan, an excellent progressive passer from centre-back, is given time to pick out a pass with Albion again in a settled 4-5-1 shape. 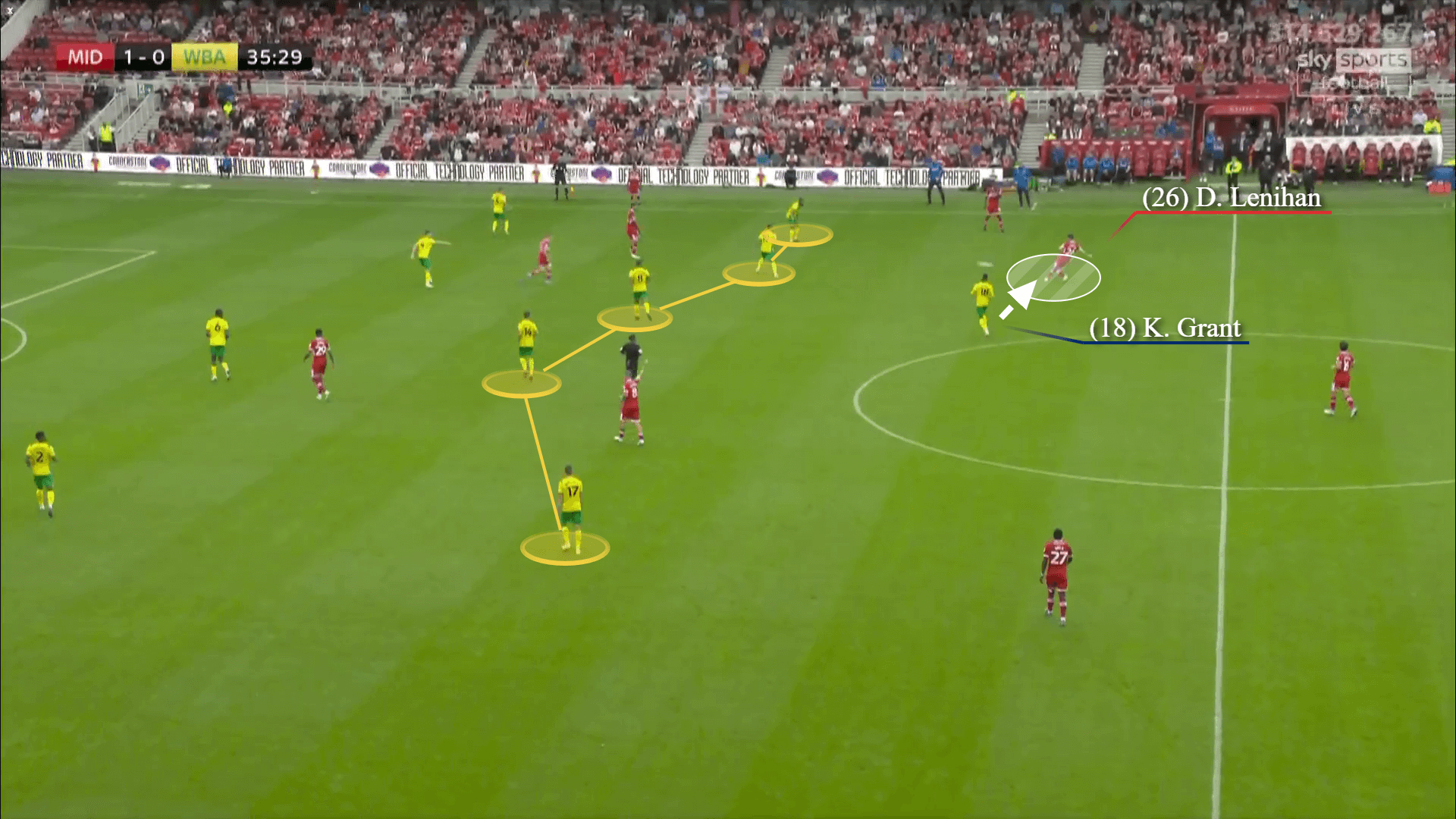 After exchanging a few passes, Molumby, willing his team-mates to support in the press, forces him to the right touchline. Lenihan remains calm under pressure and plays a pass through Albion’s disjointed midfield into Crooks, who occupied an almost identical position in the build-up to Jones’ opening goal. 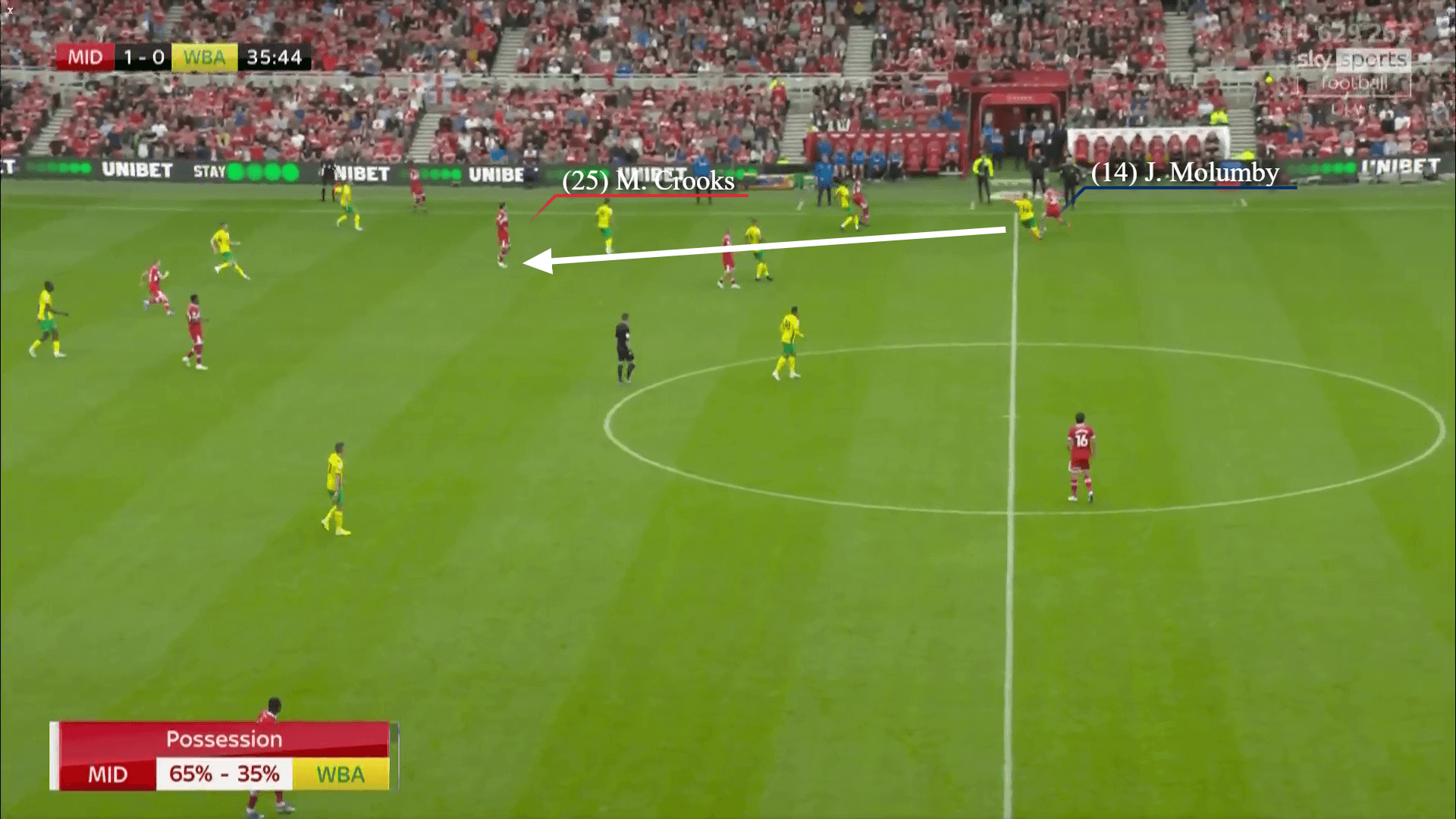 He again receives the ball on the half-turn and switches the play to Giles in acres of space on the left wing. 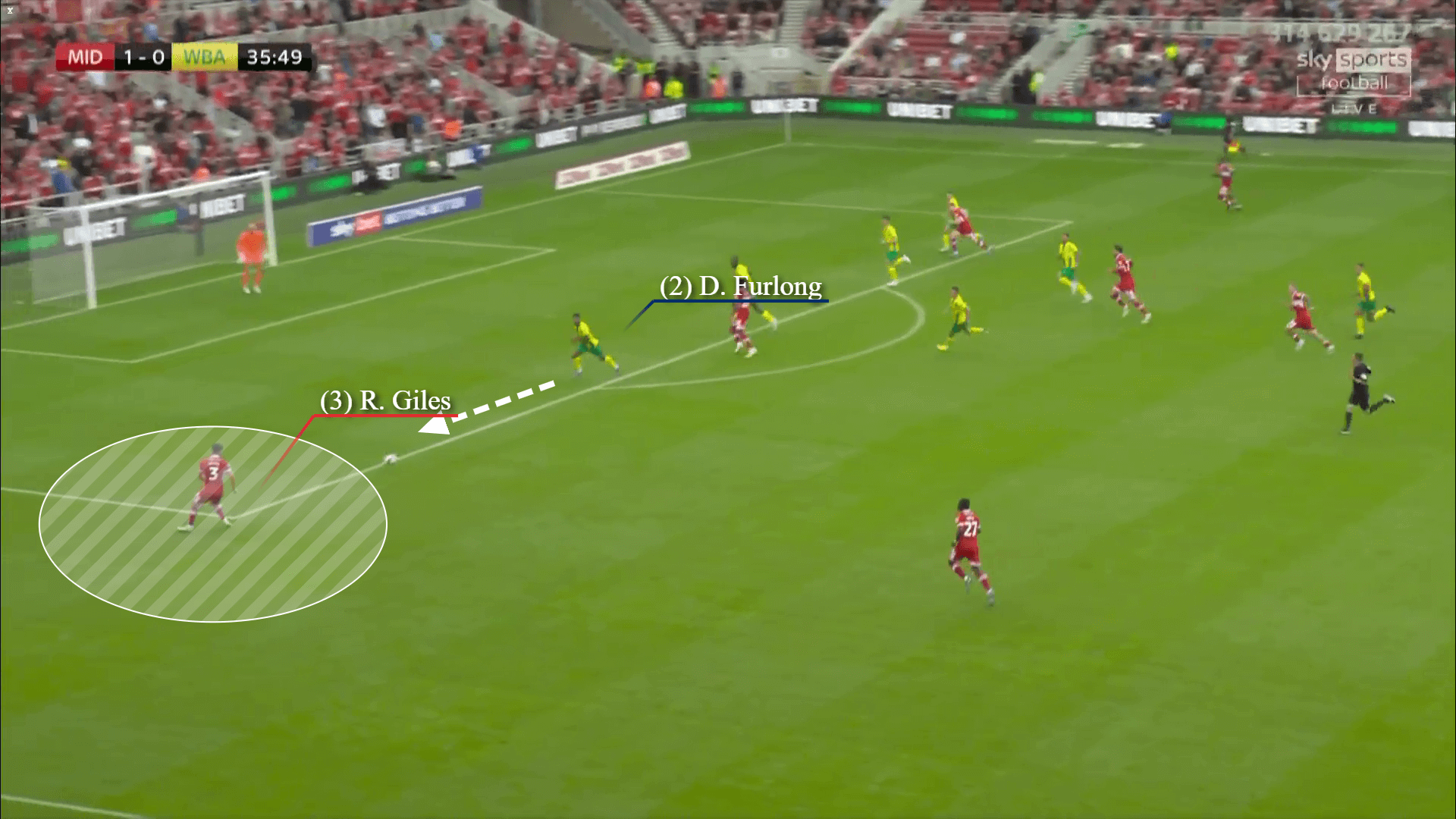 He delivers a perfect cross to Duncan Watmore, who should score inside the box. Again, Albion struggled to implement a coherent press and allowed Middlesbrough to exploit holes behind their midfield. 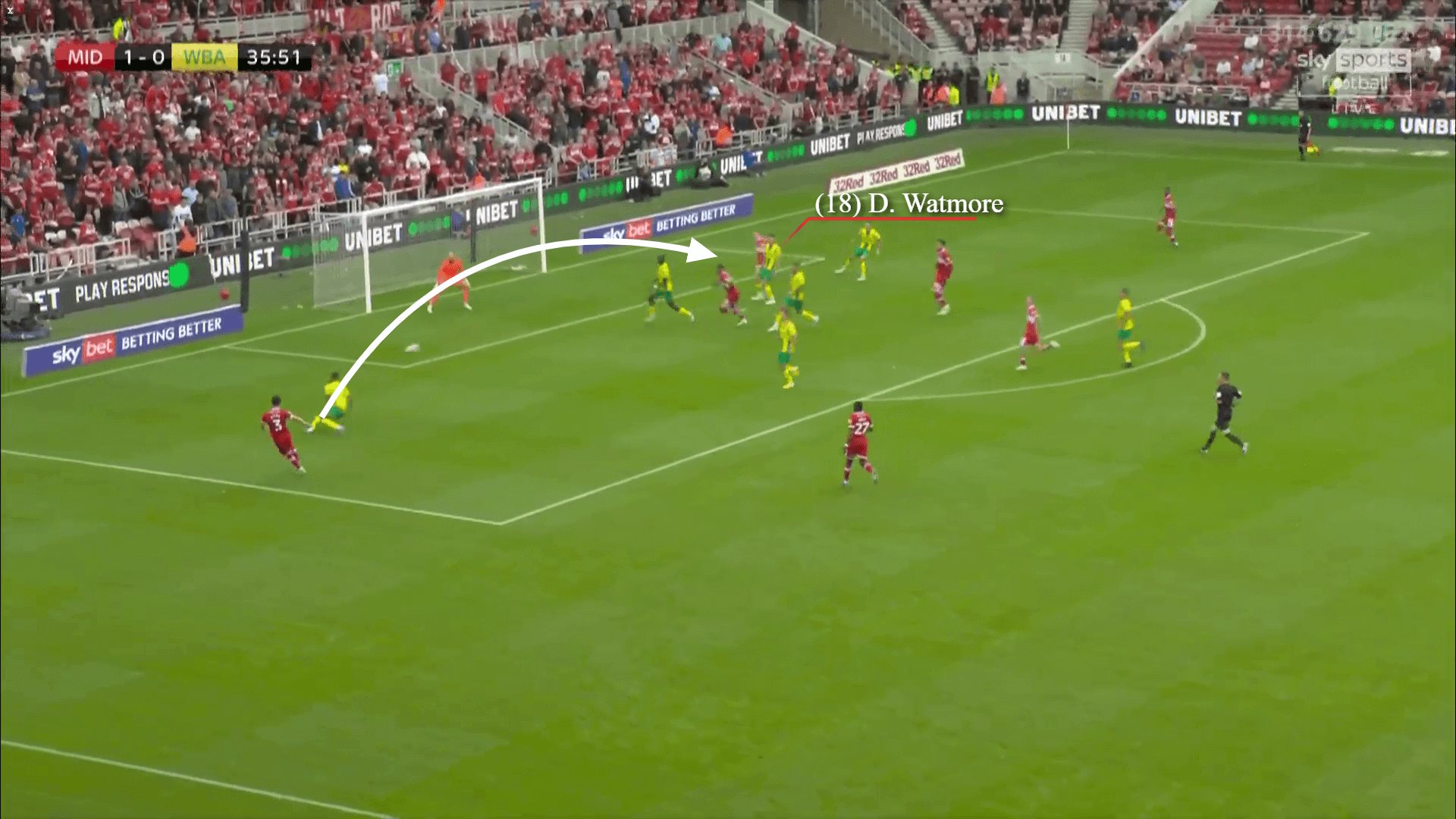 One reason Middlesbrough finished with 62 per cent possession and spent so much time inside Albion’s half was David Button’s distribution. Button attempted 17 long passes over the 90 and completed two, a 12 per cent success rate. Overall, he completed 15 of his 31 attempted passes (48 per cent). Comparatively, Middlesbrough keeper Zack Steffen attempted marginally more short passes (21) and hit his target at a better rate than his counterpart (62 per cent). This allowed them to retain possession and build attacks from deep, while Bruce’s side surrendered control too easily on several occasions.

This problem is due to Albion not having a designated midfielder willing to receive the ball from the defence and build attacks. While Howson occupied that role expertly for the opposition, particularly in the first half, the Albion defence was often left with little option but to send the ball long.

For example, here, Conor Townsend is in lots of space at left-back but without an option ahead of him to receive a pass and drive into a big area. 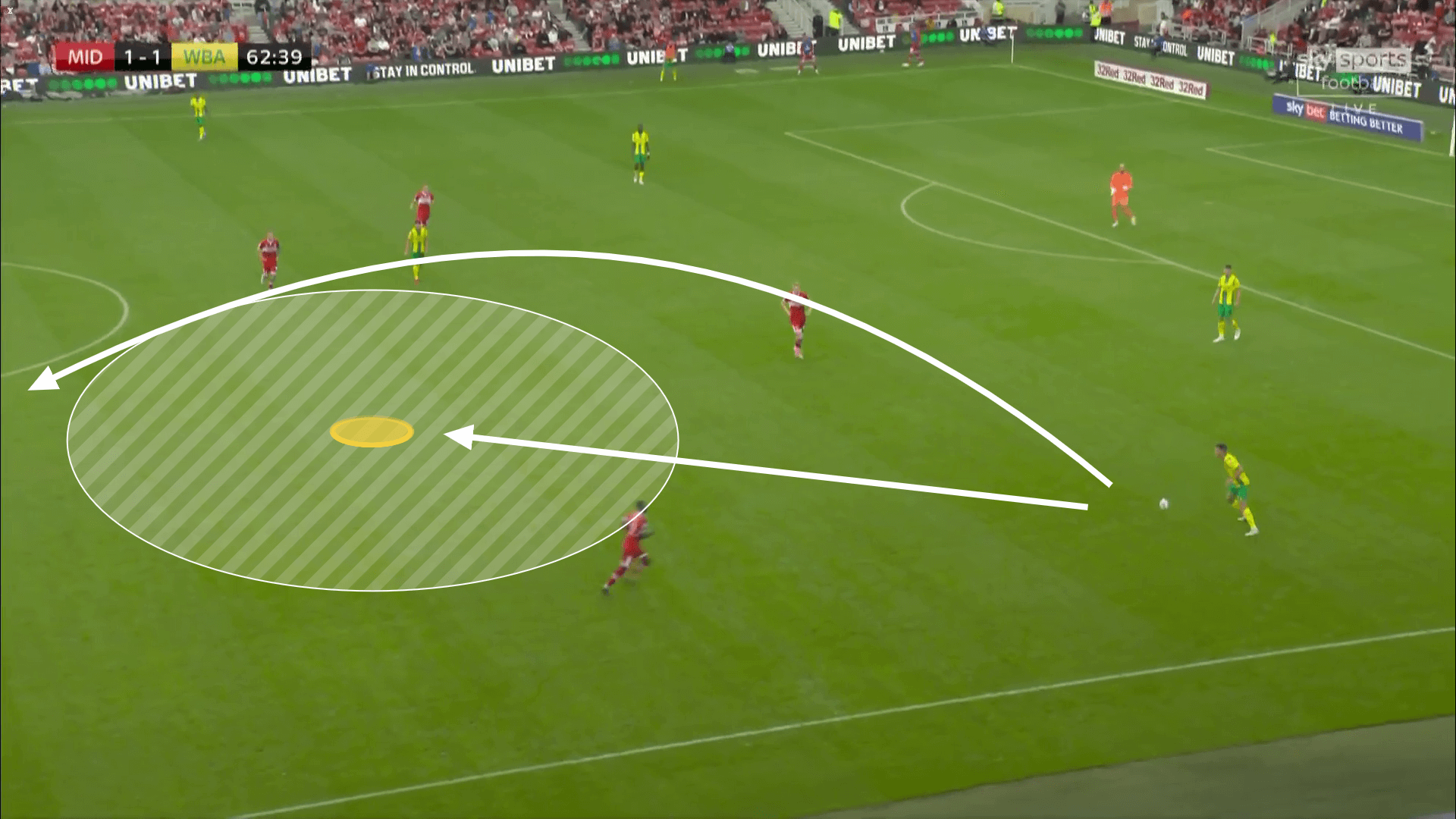 Without a clear alternative, he sends the ball long to Grant to compete in an aerial duel with Lenihan, who is much more capable aerially. The Republic of Ireland defender wins the header, setting Middlesbrough off on a counter-attack against a disorganised defence. 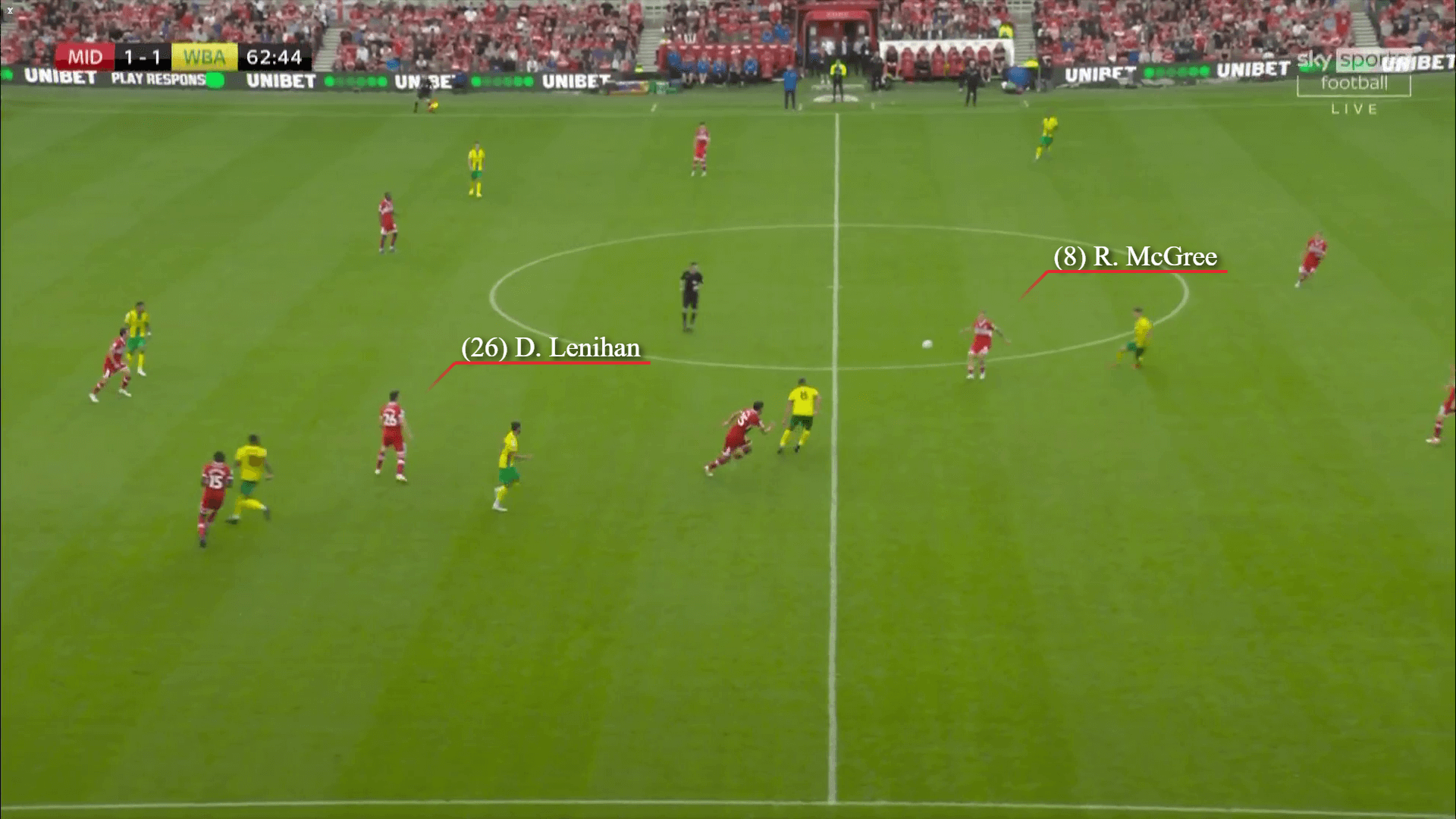 Fortunately for Albion, the attack broke down with a wayward strike, but not having a player in midfield capable of receiving the ball will put the defence under pressure throughout the season. Summer free-agent signing Okay Yokuslu is expected to bridge that gap once he returns to full fitness after spending pre-season without a club.

Still, thanks to an effective half-time tactical switch from Bruce, moving Swift ahead of the midfield and placing him on Howson, Albion did a better job of stifling Middlesbrough’s threat in the second half.

Here, Howson comes under pressure from Grant and Swift, while second-half substitute Grady Diangana is ready to intercept a pass to Jones. 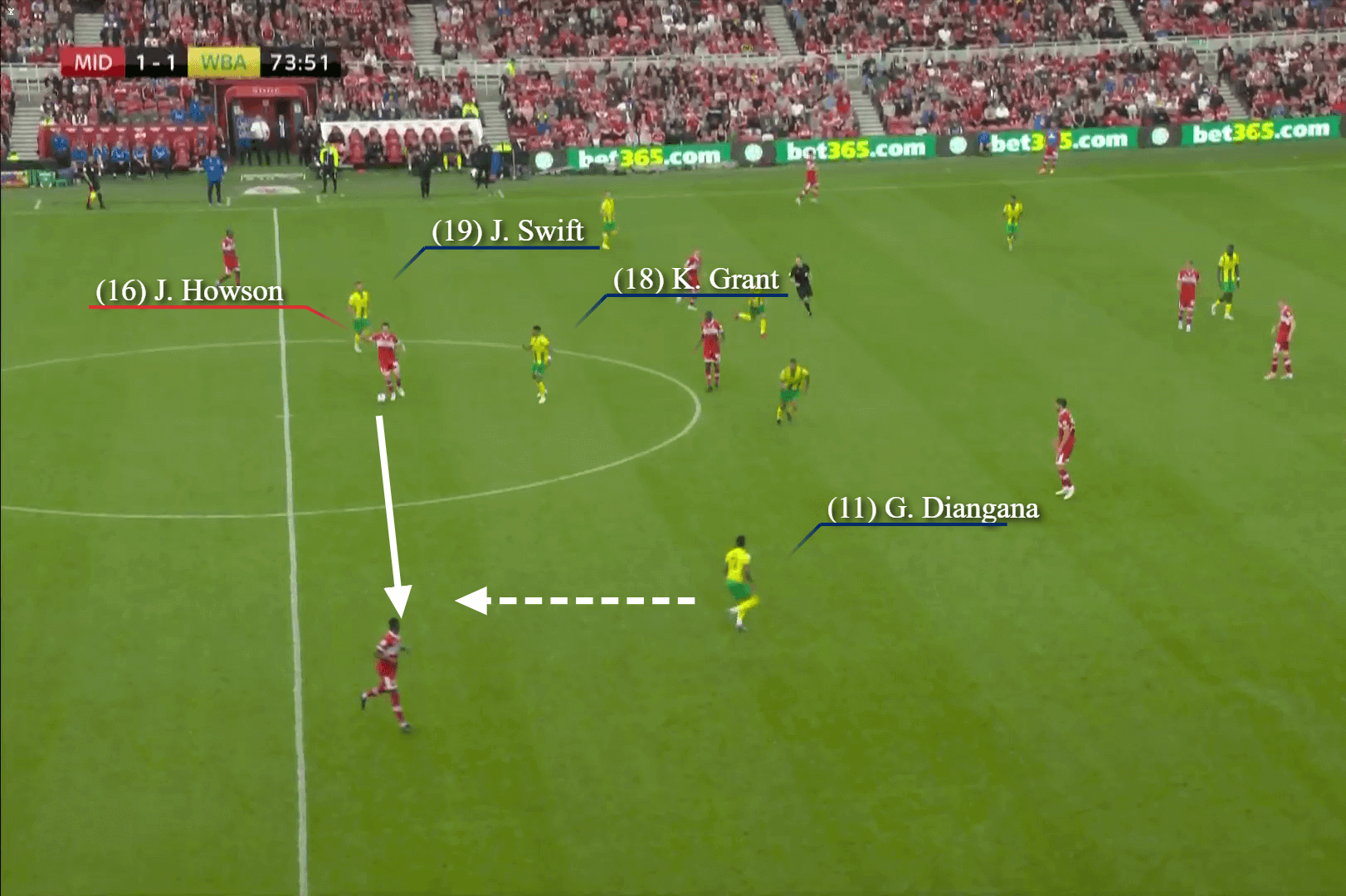 With a higher press and designated instructions, Albion forced Howson to play a conservative pass behind him and reset. 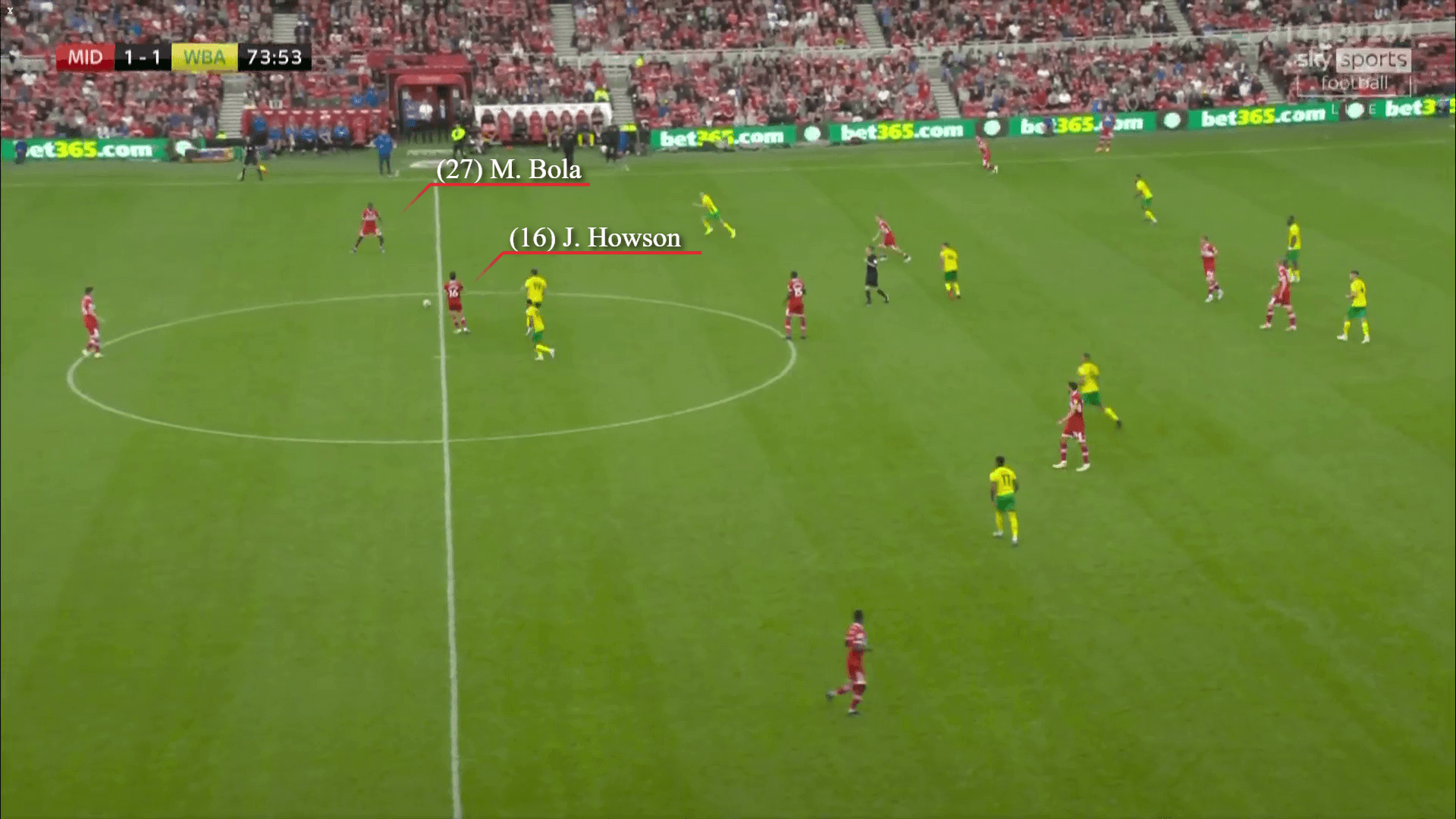 It was an example of how Albion’s attackers can use a co-ordinated press on the opposition No 6 to limit his options and stifle the wide threat caused by a back three.

“Eighty per cent of the Championship last year was a back three, but two teams that went up last year were a back four,” Bruce told The Athletic.

“We’re wary of the threat and we could have been a back three, but I wanted to be different. I thought a way to be different with what we’ve got is to change the formation because we don’t have wing-backs, but we’ve got really decent wide players. That’s where our strength is.”

With over half the Championship expected to utilise a back three, Albion cannot afford too many first-half performances like at the Riverside. There were far too many holes in the defence and midfield and Middlesbrough should have been two or three goals up by half-time.

Now, with Watford expected to line up in a back three on Monday, the onus is on Bruce to get it right from the start.