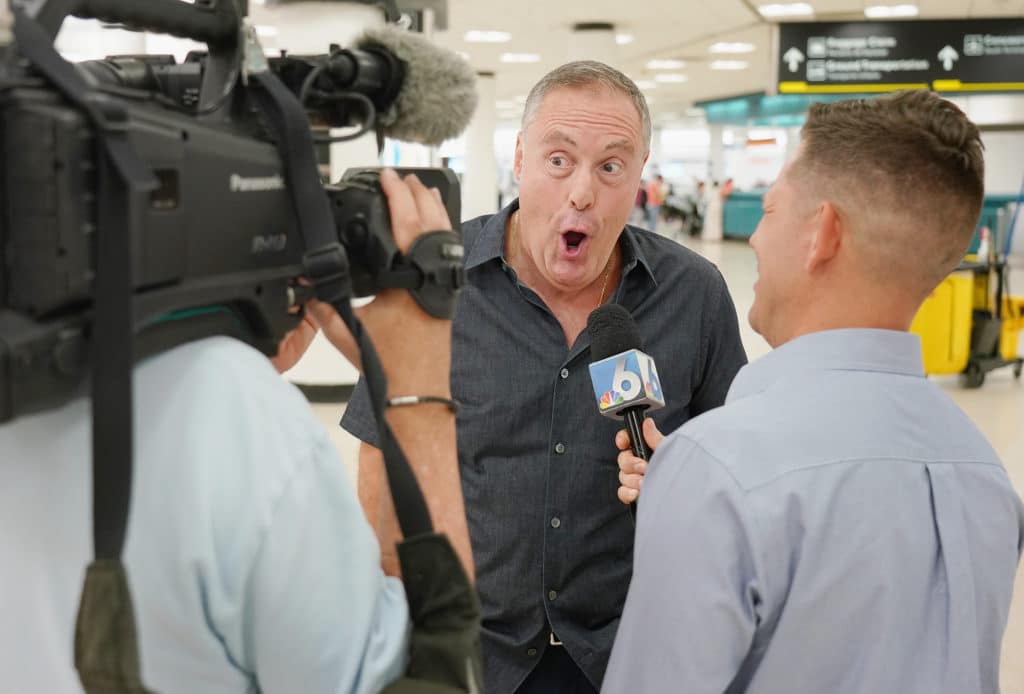 Andrés Cantor has been a household name in American soccer since the 1990s. It was then that his now famous “Goooooool” call was first introduced to U.S. audiences during the three World Cups of that decade. Today, Cantor’s voice remains synonymous with the game.

Beginning this November, Cantor will begin his 22nd year with NBC’s Spanish-language partner Telemundo Deportes as the lead commentator during the 2022 World Cup in Qatar. It’ll be Cantor’s eighth World Cup in front of an American audience.

Along the way, he has managed to become a pop culture figure in a way almost no other soccer commentator has in the United States. He has appeared on numerous television programs and talk shows over the years, including The Simpsons, The Tonight Show, Late Night with David Letterman, Pepsi and GEICO commercials, and the 2008 Hollywood remake of the Japanese franchise Speed Racer.

“It’s amazing that anyone would consider me part of pop culture because of my cameo on The Simpsons,” said Cantor during an appearance on The Athletic’s podcast Copa with Felipe Cárdenas.

“But it’s just awesome to have had the chance to be there during that episode, and in doing all the non-soccer related things I’ve done throughout my career. Like they say, if you make it on The Simpsons, you must be big. So I guess that’s why I thought it was just very, very funny.”

One can trace the growth of soccer in the U.S. to Cantor’s rise as one of the country’s premier broadcasters. When Cantor began calling games for Univision in 1990, World Cup matches on U.S. television were interrupted mid-game by commercial breaks. Major League Soccer didn’t exist yet. Access to hundreds of global leagues and on-demand viewing was unheard of. Mainstream audiences and media were being introduced to a sport that was brand new territory for American networks.

Cantor was the ideal voice at the right time.

During Italia ‘90, he popularized the exuberant and long-winded goal call that has long been a tradition in Latin America. When the World Cup came to the U.S. in 1994, Americans with no connection to the game were mesmerized by Cantor’s rapid fire delivery, evidenced by his appearance on Letterman during that World Cup.

But for U.S. Latinos, particularly those from South America, Cantor and his longtime analyst, the late Norberto Longo, sounded familiar. Both Cantor and Longo were Argentines who quickly found a neutral tone, albeit with a touch of gravitas that connoisseurs of the game could embrace.

“We do recognize that people like the way we call the games with as much passion and I think the game itself transcends languages and people switch over and watch our coverage,” said Cantor. “We anticipate a lot of people watching Telemundo regardless of language.”

Cantor said that the bar “keeps getting higher and higher” for Telemundo after the network televised its first World Cup in 2018. For this upcoming winter World Cup, Telemundo will feature a bevy of well-known names as in-game and studio analysts.

“He’s very outspoken,” Cantor said of Herrera. “He’s a feisty character. I just look forward to having him and all the others on. I think the beauty of this is that we have assembled not only a star-studded World Cup team of broadcasters, but ones that fill every soccer roster position.”

Qatar is a controversial World Cup host that has been accused of serious human rights violations, and whose laws persecute the LGBTQ community. Those realities, as well as the small size of the country, its location, and the winter kickoff time make this year’s tournament unlike any other previous edition. The country’s capital, Doha, will become the hub for every participating nation’s legion of fans. And ticket holders can watch multiple matches in person in one day.

“Obviously this will be a totally different animal with a lot of people that hopefully will behave,” Cantor said. “Hopefully the Argentinians will behave when they come across the Brazilians on either side of the road. And the Mexicans will behave alright when they see the U.S. national team fans on the other side of the street. I think it’s going to be just a great, great party.”

Cantor believes that Qatar will organize a “well run World Cup,” but he, like the rest of us, was critical of FIFA’s recent decision to begin the tournament a day early on November 20, in order to allow the host country to play the inaugural match. Prior to 2006, the defending World Cup champion would open the tournament. That changed when Germany hosted it 14 years ago.

“I​​t doesn’t look good that (FIFA) made the change 100 days out, but in practical terms it makes a whole bunch of sense to have the host country open the World Cup a day earlier with an opening ceremony and so forth,” Cantor said.

Despite that additional blemish, tournament organizers must be confident in the potential of this World Cup. Global superstars and old La Liga foes Lionel Messi and Cristiano Ronaldo will lead Argentina and Portugal. The group stage will feature some truly mouth-watering clashes. Germany vs. Spain, England vs. the U.S., Belgium vs. Croatia, and Argentina vs. Mexico will highlight the first round of play.

“(Players) are going to be almost peaking in the prime of the season. They will be much more rested than before,” said Cantor. “They will not have to travel anywhere themselves. They’ll be in their base camp as long as they stay in the tournament. So from a practical standpoint, I think this World Cup will be awesome.”

When asked about his native Argentina’s chances to win the tournament, Cantor leaned back slightly in his chair and grinned.  “I’m cautiously optimistic,” he said.

Argentina has not lost in three years under previously unsung manager Lionel Scaloni. Their 33-game unbeaten run included a Copa América final win over archrivals Brazil at the Maracaná last summer. It was the Albiceleste’s first trophy since 1993.

After losing two consecutive Copa América finals in 2015 and 2016, and losing to Germany in the 2014 World Cup final, Argentines had turned against their national team.

“Argentina fans don’t expect their teams to reach the finals. They expect them to win the finals,” said Cantor.

Now, they believe that Messi could lift the World Cup trophy on December 18. Scaloni has assembled the ideal complement of players around him. Argentina has incredible momentum and there’s no doubt that Scaloni’s side will be serious contenders in Qatar.

Cantor was at the Estadio Azteca in 1986, then as reporter for El Gráfico, when Diego Armando Maradona carried Argentina to their second World Cup final win. Cantor covered Maradona’s career from the very beginning and formed a personal bond with him along the way. The two-year anniversary of Maradona’s death will come the day before Argentina face Mexico on the second match day of Group C.

“This is the guy that gave me the most happiness in my life, after the birth of my kids and I guess the day I got married,” said Cantor. “He lives forever in my memory, in my heart.”

It’s evident in speaking with Cantor, that for him, Maradona is at a level that not even Messi can surpass. Every goal that Messi scores for Argentina is “a special Messi moment”, Cantor said. But there isn’t a specific goal that stands out like Maradona’s daring run against England in ‘86.

“I don’t have a Maradona moment with Messi like I did with Diego,” he said.

Cantor acknowledged, however, that Messi had carried Argentina to each of the aforementioned international finals. He extolled Messi’s talent while essentially admitting to living in fear that the Paris Saint Germain playmaker could pick up an injury before November.

If this Argentina squad’s destiny is to become world champions, millions will witness Cantor’s emotional call for Telemundo. Perhaps then he’ll have his own Messi moment to cherish forever.

“I’ll give you a phrase out of the coach’s playbook,” said Cantor with a smile. “I hope that the next Messi play will be my favorite and I hope the next will be in game seven (in Qatar).”