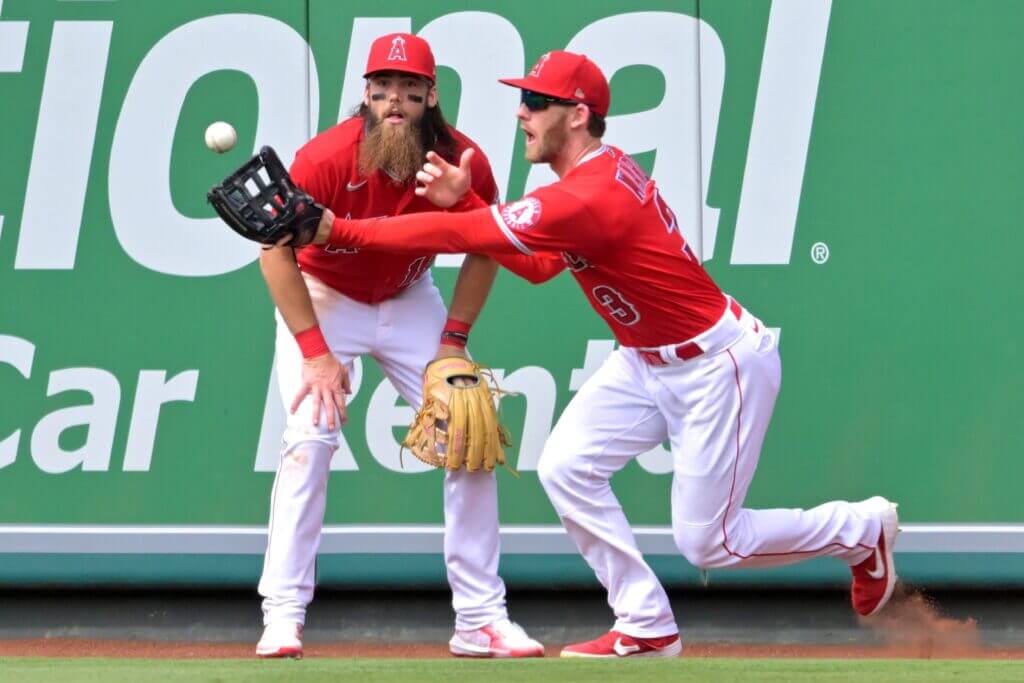 ANAHEIM — There are 162 games in a season, so ups and downs are bound to happen. The first-evers are a given, no matter the team, no matter the season.

But man, it sure does feel like the Angels have had quite a number of them. A no-hitter, a brawl, a cycle, a 14-game losing streak, four different managers, an intentional walk with the bases loaded … and that’s just to count a few. And that’s accounting only for what’s happened on the field.

On Sunday, Reid Detmers recorded another. An immaculate inning in the second — striking out three batters on nine pitches. But the Angels lost 5-2 to finish off a 6-18 month.

All those moments are scattered parts that have added up to a season that looks not dissimilar to many others for the Angels. The team ended July 16 games below .500.

Bigger than any one-off cool-moment wild occurrence is the underlying failures. The Angels hit just .199 in July. They struck out 250 times in 875 plate appearances. Only slightly worse than June, when the Angels hit .215 as a team. The team’s July ERA was 4.63 entering Sunday, by far the worst month of the season.

So yes, there may have been an immaculate inning. But there was another loss Sunday. Another reminder of just how much needs to change with this team as it enters the trade deadline.

It’s been a wild season for the Angels. Many highs. Many lows. It’s all come out to this, the team on the verge of another lost season.

Three up, three down

Janson Junk (up): Junk picked up his first MLB win Wednesday in his first start of the season. He went five shutout innings against the Royals, striking out eight batters and walking one.

David Fletcher (up): Fletcher made his much-anticipated return Thursday. Fletcher went 4-for-10 with two doubles in those three games. The hope is that his offense returns to 2019-20 levels post-surgery. So far, so good.

Luis Rengifo (up): Rengifo makes this list for the second week in a row. But it’s impossible to omit him. He’s the Angels’ best hitter right now and drove in the game-winning runs Saturday night.

Jo Adell (down): Adell’s defense is just not good right now. It was punctuated by a frustrating error that led to a little-league home run Friday. But his routes and jumps are still not great, and his offense has regressed as well.

Taylor Ward (down): Ward went 1-for-21 with six strikeouts during the week. It has been a real slog for him offensively since he went on the IL at the beginning of June.

Aaron Loup (down): Loup has a 9.82 ERA since the All-Star break. That’s five runs in 3 2/3 innings. It’s not just this stretch. He’s been having a really bad season since the middle of May.

• Despite leading the majors in strikeouts, the Angels went 40 plate appearances Tuesday without a strikeout. Shohei Ohtani K’d as the first batter of the game and Brandon Marsh did so on the penultimate at-bat.

• The Angels were shut out twice and shut out opponents twice this week. Before Sunday, they hadn’t played a one-run game since July 14.

• Raisel Iglesias’ save Saturday was his first in more than a month. That came June 29 against the White Sox.

• Detmers struck out 12 batters Sunday. His previous career high at the MLB level was seven strikeouts.

Quote of the week

“Regardless of where I’m playing, I want to give it my all, try to win the ballgame that’s right in front of me. I’m with the Angels right now. And I’m very thankful for what they’ve done. I really love the team. I love my teammates. Right now I’m an Angel, and that’s all I can really focus on at this point.” — Shohei Ohtani, when asked if he wants to be with the Angels in the short term and long term.

• July 27, Angels recall Janson Junk, option Austin Warren: The Angels needed a starter for Wednesday. Junk had been pitching well in Triple A and a few of the other 40-man options were unavailable. He pitched well and has earned another start. It was a little surprising for the Angels to option Warren, who had been so good last year. He’s had some bad luck with injuries this year and had struggled of late.

• July 28, Angels activate David Fletcher, option Michael Stefanic: The decision to option Stefanic made sense. He was on an 0-for-24 stretch. Plus he and Fletcher basically fill the same role. It’s been a long time out for Fletcher, and the Angels hope he can be an offensive spark.

• July 28, Angels place Matt Duffy on the 60-day IL: This was done so the Angels could avoid DFAing Stefanic. That being said, Nevin said Duffy wasn’t thrilled with the decision to keep him out for at least another month.

• July 30, Angels option Elvis Peguero and Jose Marte, recall Touki Toussaint and Chase Silseth: The Angels needed to make a move to get Saturday’s starter, Silseth, up. And they also needed to add a pitcher who could be a long man out of the bullpen. That was Toussaint, who was solid in his debut. Peguero and Marte both look like they could use some more minor-league experience.

• July 31, Angels activate Jimmy Herget, option Silseth to Triple A: This is the first time Silseth has been in Triple A. He’s been optioned twice before, both times to Double A.

• Angels fifth-round draft pick Sonny DiChiara made his professional debut Saturday in Double A. He reached base in all five plate appearances.

• Angels first-round pick Zach Neto made his pro debut for Class A on Saturday and collected his first hit.

• Angels Triple-A pitchers Kenny Rosenberg (July 3) and Jhonathan Diaz (July 16) haven’t pitched in weeks. Both are on the 40-man roster. Rosenberg told The Athletic he had some arm issues coming back from paternity leave and hopes to return to game action in a couple of weeks. The reason for Diaz’s absence is unclear.

• Angels prospect Jose Soriano made his return to the mound this week for the rookie ball team in Arizona. The former Rule 5 draft pick threw two shutout innings and his fastball was hitting the upper 90s.