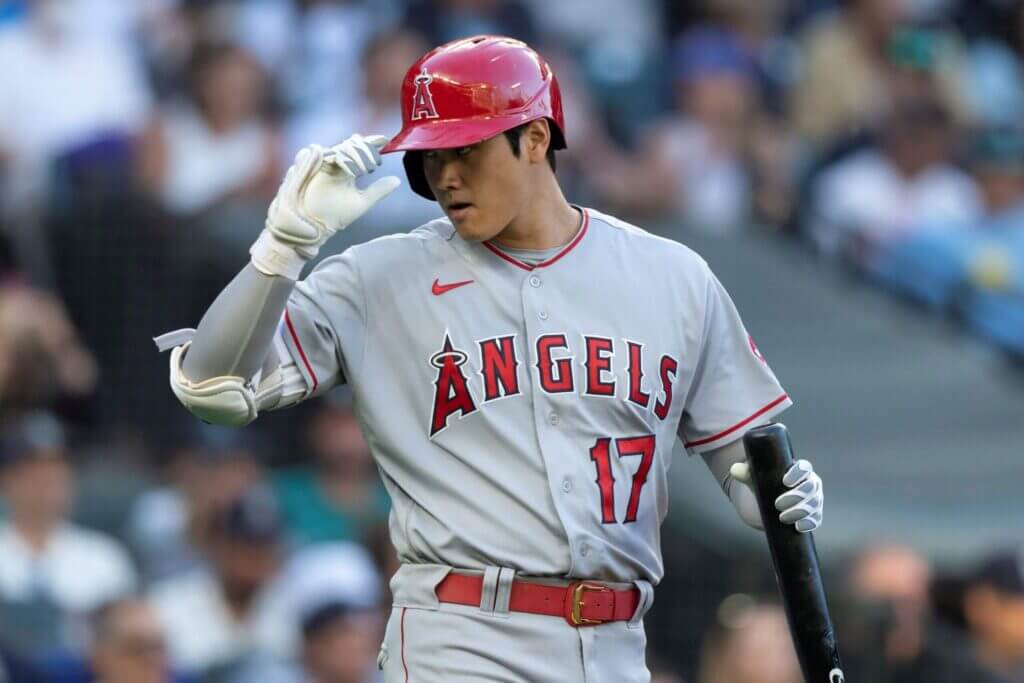 SEATTLE — The Angels didn’t have a starter listed for the first game of their doubleheader Saturday. Angels interim manager Phil Nevin was asked about the possible options during his pregame media availability Friday.

It could be Mike Mayers, he said. The righty had been called up and put on the taxi squad. It could also be Jaime Barria, a long reliever who has performed well all season.

Then he was asked about a different name. Mostly as a joke. Andrew Wantz.

Even Nevin couldn’t hold back a laugh.

It was Wantz, of course, who made his only start this season against the Mariners on June 26. The reliever-turned-opener nearly hit Julio Rodríguez, then beaned Jesse Winker an inning later. A massive brawl ensued. Twelve players, coaches and staff members were suspended.

“He could be in the mix, you never know,” Nevin said, half-sheepishly, half-seriously.

Enough time has passed that jokes can be made and appreciated. This series is the first between the teams since they duked it out at Angel Stadium.

Chaos in Anaheim after Jesse Winker is hit by a pitch, causing a benches clearing brawl between the Mariners and Angels 😳

The Mariners have skyrocketed. They won 14 games in a row shortly after the brawl. The Angels have spiraled. Though both sides will tell you the brawl had nothing to do with how either team played afterward, there’s no denying the timing at least takes on the appearance of an inflection point.

“We don’t really care about them,” Winker said Friday. “We’re just trying to play our game. There’s other teams in the American League that we’re chasing. So we’ve kind of had our focus on them.

Major League Baseball determined the Angels were the instigators. Of course, the Mariners threw up and in at Mike Trout the day before the brawl. Whether or not the Angels acknowledge it, it appeared throwing at the Mariners the day after was to even the score.

For the Angels, four coaches and four players were suspended. Only three Mariners players were forced to miss games. No coaches were included.

Despite winning the day of the brawl and the day after — also a day the Mariners lost — the Angels have been the team to suffer the consequences from that day. They played with fewer coaches. They lost top relievers to suspensions. Archie Bradley fractured his elbow tumbling out of the dugout. He hasn’t pitched since. Heck, as it stands, Anthony Rendon will be suspended for the first five games of next season.

“Both teams have gone in different directions since then,” Nevin said. “It’s not because of that. It’s just that their organization is going one way. We’re going another.

“I don’t think it’s any more indicative than what happened at the trade deadline. The moves we made compared with the moves they made. It’s just where we’re at.”

Of course, if the Angels had come out of that brawl and played well, it would have been them making moves to acquire players at the deadline. That was the plan. The trade deadline moves aren’t just indicative of where the teams are in general, as Nevin said. They’re indicative of how they’ve been playing the past six weeks.

Wantz said after the game that the brawl could bring the group together. So, too, did Raisel Iglesias, who infamously threw a basket of sunflower seeds on the field in frustration post-ejection.

“That’s going to help us to be more united,” Iglesias said after getting ejected. “We’re going to be for sure playing better.”

Iglesias is now with the Braves. Things did not go as the Angels hoped or planned.

Though the brawl didn’t help the Angels in the way they said it might, they also don’t believe it expedited what has become a disastrous season.

“Things happen in this game — it’s unfortunate that happened,” general manager Perry Minasian said July 12. “But things happen. I don’t think that has anything to do particularly with how we’re playing.”

And while both teams say it’s a part of the past, it’s unclear if there’s been a reconciliation. Mariners manager Scott Servais hinted at criticism of Nevin’s role in the brawl in its immediate aftermath, telling reporters, “I’ve often said, ‘When people show you who they are, believe them.’”

Servais proactively avoided any questions about the incident Friday.

“Just play the game,” he said repeatedly, even interrupting questions about it in the hopes of stymieing them even being asked. He didn’t answer whether he and Nevin ever spoke. Nevin answered it with one word: “No.”

J.P. Crawford, one of the other Mariners players who was suspended, also did not seem keen on reflecting on that day. He dismissed the notion that the brawl could have helped spark them to get on a roll. They had, after all, won five games in a row heading into the day of the brawl but lost four of five to the Angels the week prior.

The third-base umpire, Adrian Johnson, who was also the crew chief the day of the brawl, did not make any ejections Friday. If animosity existed, it wasn’t overt.

It was just a normal baseball game between two teams going in much different directions.

“We got an up-close and personal look at them last time,” Servais said. “We will not get that this time.”

(Photo of Shohei Ohtani tipping his helmet toward the Mariners dugout before his first at-bat: Stephen Brashear / Associated Press)