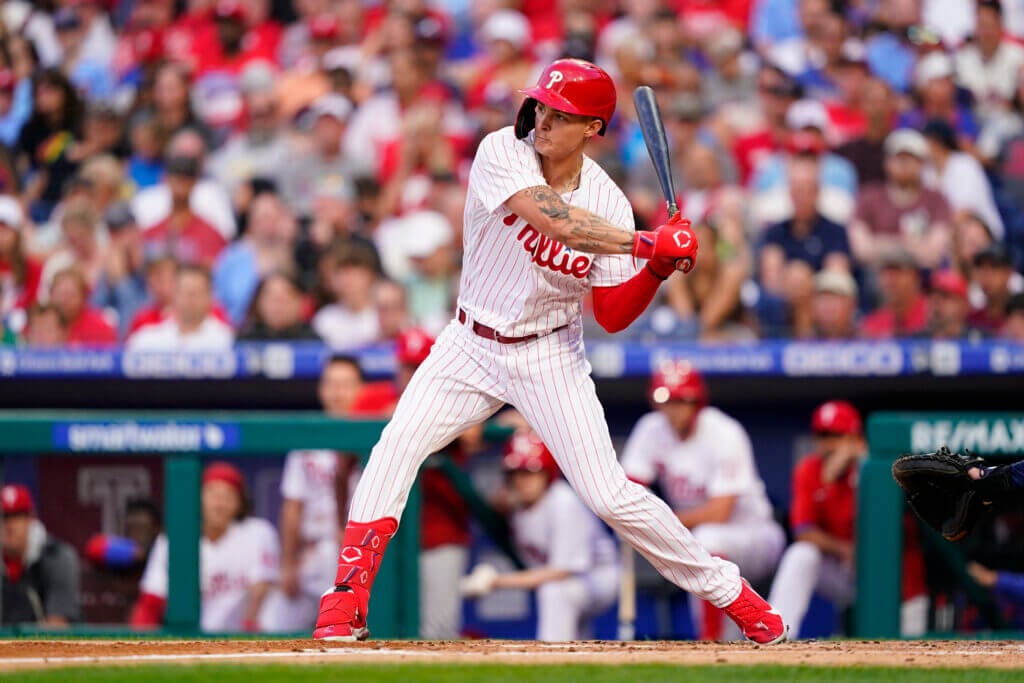 ANAHEIM — Most players dealt on the day of the trade deadline simply move from one team to the other. Mickey Moniak, however, spent his day on three different teams.

Moniak woke up Tuesday morning at Triple-A Lehigh Valley, then was told at 8:30 a.m. to fly to Atlanta to join the Phillies. Upon arrival, he got dressed and started shagging fly balls during batting practice. That was, until, Moniak found out he had been traded to the Angels just minutes before the 6 p.m. ET deadline.

The hectic mess of Tuesday, though, has put him in position for a situation he hopes is far more stable. Angels manager Phil Nevin wants to give Moniak, the 2016 No. 1 pick, a chance to be an everyday outfielder. Real runway to show what he can do.

On Wednesday, Moniak started in center field in his Angels debut.

“At the end of the day, looking back on my time in Philadelphia, I was grateful for it, obviously,” Moniak said. “Getting the chance as an 18-year-old kid. I came up with them. I debuted with them.

“But I think that, for me, I’ve always been a guy that takes a little bit to get comfortable at every level. And once I get comfortable, it’s on from there. I wasn’t really given that opportunity there.”

Angels lineup with Mickey Moniak starting in center and Jesse Chavez back on the roster. pic.twitter.com/miqj5UFpoU

Moniak understands why he wasn’t given everyday looks with the Phillies. He doesn’t hold it against them. The 24-year-old has struggled significantly in his limited major-league opportunities over the last three seasons. He’s hit just .129 over 105 plate appearances, which include 41 strikeouts. His troubles lie in hitting offspeed pitches.

But Nevin knows better than anyone what it might take for Moniak to jump-start his career. Nevin, too, was a No. 1 pick in 1990 — selected ahead of Derek Jeter. It took him five years to reach the big leagues. He was traded in his rookie season, and it took another five years for him to play more than 100 MLB games in a season when he broke out in 1999.

Nevin — a former phenom who had the No. 1 pick tag hanging over every success or failure, but a phenom who eventually figured things out and enjoyed a solid MLB career — constructed a path that’s still possible for Moniak.

“I can relate to a lot of the things he’s gone through,” Nevin said. “You don’t think about it every day. You’re reminded of it once in a while. And you can say all you want about how that doesn’t matter and there’s no pressure on that.

“At the end of the day, there is. There’s fan mail, cards. The everyday things, the interviews. Being constantly reminded of that adds the pressure to you.”

Nevin actually knew Moniak before he was the top pick. Moniak is from Southern California and grew up playing travel ball with and against Nevin’s son, Tyler. The opportunity to reunite in this capacity is exciting to both.

The Angels interim manager texted Moniak on Tuesday night to welcome him. Nevin also asked Moniak whether he would be OK to enter the starting lineup immediately. The answer was a yes.

The pressure is on here, there’s no doubt. It’s the major leagues. But the situation with the Angels is not comparable to the Philadelphia market. Nevin said there’s also a cultural difference for a laid-back kid like Moniak who grew up on the West Coast going to the beach.

It can be ruthless in Philadelphia, and the microscope of being the top pick was heightened because the expectation was for him to immediately perform for the team that drafted him and gave him more than $6 million in a signing bonus.

That’s not what will define him with the Angels. And he has the familiarity of home, family and a manager who can relate to him and his ups and downs.

“We really like Mickey. I think he still has a chance to be a good player,” Phillies president of baseball operations Dave Dombrowski said. “I told him this when I talked to him on the phone: A change of scenery will not be harmful for him.”

Moniak feels like he’s made significant progress, and that it showed with his obscenely good spring training numbers — six homers and a 1.351 OPS. However, that spring ended with him getting hit in the right hand and breaking it. It forced him to miss seven weeks.

Once Moniak got back to the big leagues in late May, he was just searching for his comfortability. And it didn’t happen in his two brief stints with the Phillies this season.

The plan, though, is for this to not be a stint with the Angels. Both sides hope it’s a full-time role. That he’s a part of the future. Trading Brandon Marsh to the Phillies was a significant decision for the Angels. But Moniak took his old locker — and is hoping to fill his role, too.

“It’s about getting comfortable,” Moniak said, “and I’m excited to be able to do that here. … I want to be on that field every single night.”

Moniak was once the Baseball America High School Player of the Year. He hit nearly .500 his senior year. He was picked ahead of Cy Young pitchers and some of the game’s superstars. Living up to expectations is difficult. Moniak hasn’t done that yet, but he has the opportunity to do that now. And he’ll have someone in his corner who knows exactly what he’s going through.

“I think that’s one big connection that we do have,” Moniak said. “It will be cool to have him as a manager. And pick his brain about things like that. Things don’t happen overnight. … To have a guy like that leading us is huge for me.”

• Mike Trout (back) is scheduled to start rotational work in the gym soon. When approached by reporters Wednesday afternoon, he said he hadn’t started the work, but did not indicate there was any change to his schedule. Once he progresses through his rotational work, he hopes to be able to swing a bat shortly thereafter.

• New Angels pitcher Tucker Davidson joined the team Wednesday after getting traded from the Braves at the deadline. Davidson, who started Game 5 of the World Series but has mostly pitched in Triple A this year, will join the Angels rotation and start this weekend in Seattle, most likely Sunday.

— The Athletic’s Matt Gelb contributed reporting to this story.