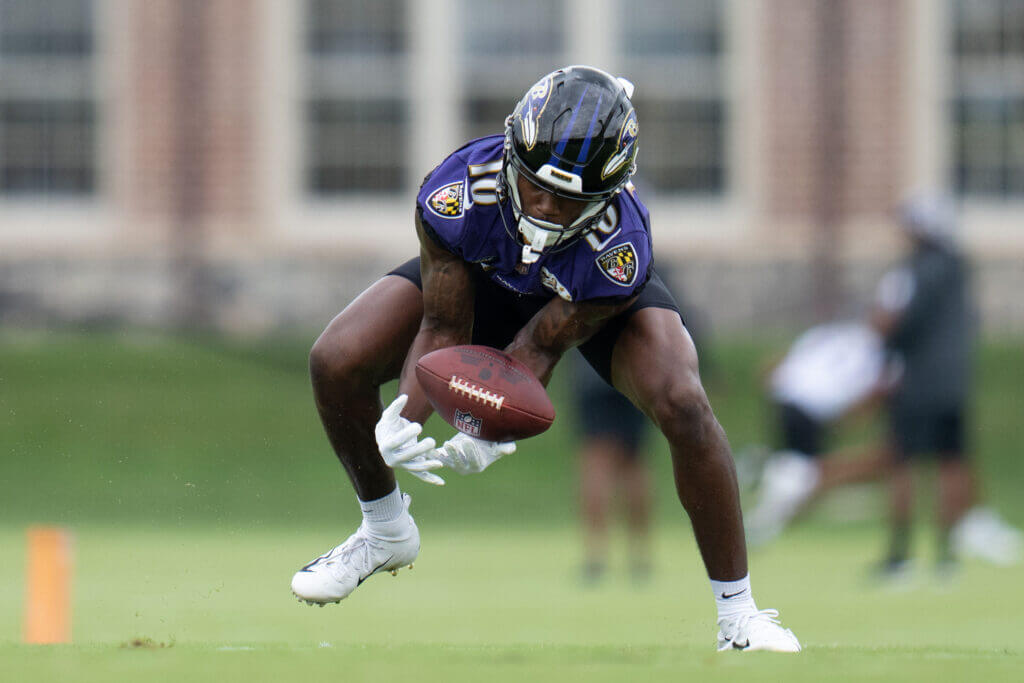 Quarterback Lamar Jackson will not be playing in the Ravens preseason opener Thursday night against the Tennessee Titans at M&T Bank Stadium. Many other established veterans including tight end Mark Andrews, guard Kevin Zeitler, outside linebacker Justin Houston and defensive backs Marlon Humphrey and Marcus Williams, won’t be in action either.

A year after the Ravens lost running back J.K. Dobbins and inside linebacker L.J. Fort to season-ending injuries in preseason games, foreshadowing a run of injuries that never abated, head coach John Harbaugh has already said that he’ll hold out certain players Thursday and potentially in other preseason games, too.

Maintaining a healthy roster has been a focus of the Ravens all summer. The added benefit to keeping frontline starters on the sideline is Ravens officials get to hone in on some of the position competitions and roster battles that will define the final 2 1/2 weeks of the preseason.

By next Tuesday, the Ravens will have to cut their roster from 90 to 85 players. A week later on Aug. 23, they’ll have to make five more transactions. Then, they’ll have to get down to the requisite 53 players by Aug. 30, three days after their preseason finale against the Washington Commanders.

There is so much still to be decided and the roster construction is complicated by the five players still on the physically unable to perform list — running back Gus Edwards, left tackle Ronnie Stanley, outside linebacker Tyus Bowser and defensive backs Marcus Peters and Ar’Darius Washington — and health questions surrounding a number of other projected 53-man players, including Dobbins (knee), tight end Charlie Kolar (hernia), center Tyler Linderbaum (foot), outside linebacker David Ojabo (Achilles) and cornerback Brandon Stephens (soft-tissue injury).

This, though, is where their position competitions stand heading into the preseason opener:

Harbaugh and offensive coordinator Greg Roman have both called this a wide-open competition. The first order of business will be getting a better read on Dobbins’ health and readiness for the Week 1 regular-season opener. Dobbins returned to the practice field this week, but he still has some physical hurdles he’s going to have to pass before you can write his name in ink on the 53-man roster. He has about 4 1/2 weeks to get ready. If Dobbins is a full go, the Ravens will have to decide whether they need to keep an extra back around until he shows that he can handle a full workload. Badie, a rookie sixth-round pick, is pretty close to a lock. The Ravens like Davis’ ability out of the backfield and he gives them experience at the position. Hill may have played his way onto the right side of the bubble the past couple of weeks with how good he’s looked, but he still has work to do. Coaches have been extremely complimentary of Clement and like Hill, he’s a quality special teams player and that matters here. McCrary still could make a push with a dynamic preseason. However, it currently looks like a four-player battle between Badie, Davis, Hill and Clement for two or three spots. Edwards, by the way, is not expected to be ready for the start of the season.

This competition really hasn’t heated up, primarily because none of the team’s five undrafted free agents have made a push. Bridges got off to a strong start, but he’s struggled in recent practices. Bolden, Gaither and Williams are all dealing with physical issues. Wallace, meanwhile, was pretty much viewed as a lock for that fourth wide receiver spot behind Rashod Bateman, James Proche and Devin Duvernay, but he’s not distinguished himself in camp. Moore has and he’s made a very strong roster case. He’s probably been the third most productive receiver in practices behind Bateman and Proche. Victor has had his moments, too. There’s a chance that the Ravens could keep just four receivers and use tight end Isaiah Likely as a receiver, but the former is not ideal. The Ravens really need some of their young receivers to emerge in the preseason to force them to make some tough decisions.

Roman declared Powers as the leader for the job early in camp and judging by how the practices have played out since, there’s been no indication that the coaching staff has had a change of heart. Powers has gotten most of the first-team reps. Phillips has had a nice camp and seems to have more upside than Powers. He’s also bigger and more athletic. However, the coaches value Powers’ consistency, toughness and experience. It’s generous at this point to include Cleveland in the running. The second-year third-round pick missed the first week of camp because he struggled to pass the conditioning test and there’s been no evidence that he’s made up significant ground.

This is operating under the assumption that Stanley will be ready; Zeitler, Linderbaum, Morgan Moses, Patrick Mekari, Powers, Phillips and Daniel Faalele are locks; and Baltimore will keep 10 offensive linemen, which seems to be the preference. James has been working as the first-team left tackle throughout camp. If the team believes he can handle that spot, he’s probably not going anywhere. The only thing keeping him from lock territory is his detailed injury history and the $2.6 million the Ravens would save by moving on. Cleveland has had a rough summer. Still, it feels unlikely that Baltimore would cut a guy they drafted in the third round a year ago. However, Colon’s chances improved with Linderbaum’s foot injury. The Ravens could want some insurance at center and Colon has been a competent fill-in. Sharpe also represents solid depth at tackle, where the Ravens have injury questions. Missing practice time this week and potentially not being available Thursday isn’t helping Sharpe’s cause.

It’s possible that the Ravens would be comfortable keeping just five here and barring injuries, that group would be made up of Calais Campbell, Justin Madubuike, Michael Pierce, Travis Jones and Broderick Washington. All of them have looked good this summer. In reality, all of the defensive linemen have had nice camps. Urban, though, probably has the edge. He fits well into the defensive line rotation and the Ravens value his size, experience and selflessness. He also is a nice piece to have on the field-goal block team.

Vince Biegel’s season-ending Achilles injury and the team’s surprising decision to not bring in another outside linebacker (at least to this point) has uncluttered this competition. In fact, the Ravens could decide to keep five outside backs and that would likely mean both Hayes and Means making the team, joining Houston, Odafe Oweh and Bowser. If Bowser isn’t ready, both Hayes and Means will probably crack the 53-man anyway. Means, an eight-year vet, has flashed in practices. Hayes, a second-year fifth-round pick, has had a quiet summer after tearing it up last year, but there’s still time for him to gather momentum. Even though the Ravens are hoping Ojabo is ready to go at some point in October or early November, this still feels like a position where the Ravens need to add before Sept. 11.

We’re making several assumptions here. One, Peters, who is expected to return to practice later this month, will be ready for Week 1. Two, the Ravens have five cornerback locks in Peters, Humphrey, Stephens and rookies Jalyn Armour-Davis and Damarion Williams. And three, the Ravens will keep five safeties (Marcus Williams, Chuck Clark, Kyle Hamilton, Tony Jefferson and Geno Stone), which could impact how many corners they have room to keep. If there is a position where the Ravens will keep an extra body or two, it is cornerback. They annually get hit hard by injuries at the position. Fuller, an eight-year vet and two-time Pro Bowl selection, was signed this offseason with designs on him occupying that No. 3/4 cornerback role. He’s showing better form in recent practices and that role still could be in play for him. He’s given up some big plays, but Seymour has had a solid training camp and Harbaugh recently lauded his special teams ability. Vereen, an undrafted rookie from Newberry, has opened eyes this summer.