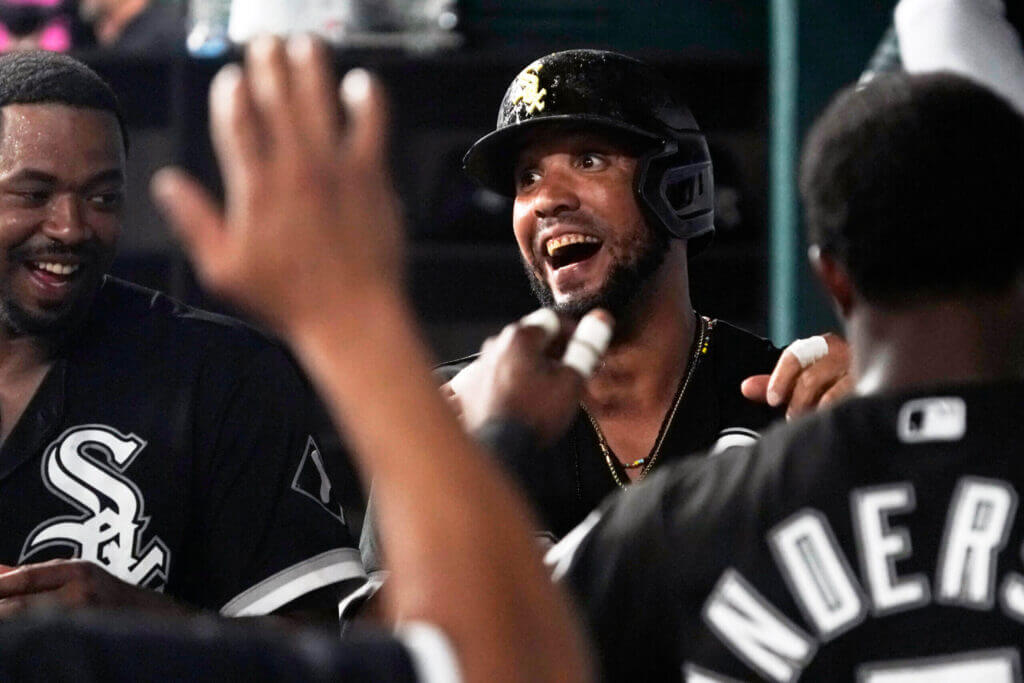 ARLINGTON, Texas — Luis Robert was not keen to provide more details about the “weird” feeling that ate three weeks of his season than Rick Hahn did Tuesday, when the White Sox general manager summed it up as the product of vitamin deficiencies likely brought on by the effects of a virus. Robert acknowledged that one Class-AAA rehab game since he last played on July 15 would probably not be the best thing for his timing at the plate and that the real test of his blurred vision and lightheadedness would come when he has to track fly balls for the first time in center field Friday night.

But he wanted to focus elsewhere.

“I’m very glad to be back and happy to finally have our lineup,” Robert said through team interpreter Billy Russo. “It’s going to be fun for us.”

Thursday night at Globe Life Field was the first time this season the White Sox have been able to put José Abreu, Eloy Jiménez, Tim Anderson, Luis Robert, Yasmani Grandal and Yoán Moncada — also known as the core of the team since 2020 — in the lineup together.

“Just a great, great feeling,” Abreu said through Russo. “Knowing that the team is complete, that everybody is where he’s supposed to be, is good. It’s something that makes you feel good. The first time we are going to be playing together, and it’s good. The past is in the past, and now we have to keep thinking of the future and keep moving forward. Today is the day it all starts for us playing together.”

But baseball, viewed through the prism of single-game results, will throw some curveballs. The first iteration of this Sox lineup not only was held to two runs on five hits in a 3-2 loss, but it also came while the Rangers threw left-handed pitchers at it for eight of nine innings, including starter Cole Ragans making his major-league debut. The third-best offense in baseball against lefties didn’t get close enough on any drive to blame its 42nd homerless game of the season on spacious confines. And the declaration of everyone being where they were supposed to be was a day premature. With Robert at designated hitter Thursday night to ease his way back, Andrew Vaughn handled right field.

As an emergency adaptation to Jiménez’s spring training injury last season, Vaughn’s effort to make things work in a corner outfield position has been nothing short of superb as the Sox have tried to jam extra offense in a lineup that’s often been working at a reduced capacity. In its second year of application, the results have sagged more than anticipated. Vaughn came into Thursday’s game with minus-11 Defensive Runs Saved (DRS), which must take into account the leg soreness he has dealt with for parts of the season. A sinking line drive in the second inning, an automatic double just over his head in the sixth and a crucial bloop single in a decisive two-run Rangers seventh all eluded Vaughn’s range Thursday night — and also reminded that Chicago’s Opening Day defensive alignment called for Robert in center, flanked by longtime center fielder AJ Pollock in right.

“I think they were just bloops in there,” said Sox manager Tony La Russa, who was disinclined to heap blame on a spacious Globe Life Field outfield, and certainly not his player. “He wasn’t playing all that deep. Those balls were just perfectly placed. He did a heckuva job keeping the ball in front of him. We also had a bloop that fell for a triple for us too, and they don’t play deep (either). Their fielder is shallow. It’s a good-sized outfield, but we weren’t all that deep, and neither were there. Just bloops.”

“He took a little peek at me; I was thinking he wanted me to take it,” Pollock said of a near-collision with Vaughn on what wound up being the decisive sacrifice fly. “I should have taken another peek at him and seen that he was there. You get to that awkward point where you don’t know if he’s going to let me, and all of a sudden the ball drops. So just kept going. Just a whacky (play). We would have had a better shot, obviously, at home — I don’t know if we would have got him. But definitely would have had a better shot if I didn’t clip him there.”

Perhaps this problem — just one for an overall weak Sox defense (-2 DRS as a team) for other reasons, planned and unplanned — will go away as Robert returns to full bore. But since Pollock has been an offensive disappointment overall and Grandal’s season-long climb to get his legs back to full strength still hasn’t seen him connect on an extra-base hit since returning to action last month, putting natural first basemen Vaughn or Gavin Sheets into right field seems like a given as the Sox pursue their best possible offense.

With all these burly first-base types on the roster, it seemed like at the outset of Abreu’s most recent three-year deal, the end of his contract might see him grow redundant on this team. Or, at least, the White Sox would have a host of worthy successors in line when he began 2022 as he did, speaking uncertainly in spring training about how much longer he would play. Instead, at 35, Abreu is as essential as ever.

José Abreu has been selected as the #WhiteSox winner for the 2022 Heart & Hustle Award!

The award is presented annually to a player who demonstrates a passion for the game of baseball and best embodies the values, spirit and traditions of the game. pic.twitter.com/KPuaaq9nqC

So much of this is to Abreu’s credit. Having overhauled his plate approach, his .383 on-base percentage is tied for the highest of his career and has kept him extraordinarily effective (148 wRC+ overall, or he’s 48 percent better than the average hitter), even as he’s been affected by the same strange decline in home run power as the rest of the team. And the phenomenal physical condition he’s kept himself in has allowed him to play in all but two of the White Sox’s 105 games this season.

But with injuries and inconsistency, the groundswell of replacements has not taken place. Only one Sox hitter is within 100 plate appearances of Abreu this season, and it’s also the only one with a weighted-runs-created score in a similar stratosphere. It’s Vaughn, of course, who gamely bounces around to wherever he’s asked in light of Abreu being an institution at his natural position. Yet, for the team, it would be a godsend if Abreu decides to continue after this season, even if it inconveniences Chicago’s most qualified and productive young successor.

“As long as I can or as long as life wants me to,” Abreu said of how much longer he’ll keep playing. “I’m in a good place right now. My family is in a good place. I’m in a very good organization here. We’ll see. I don’t put numbers or limits. We’ll see what life has for me, and I will go with it.”

So, it was a big deal that Robert, a rare White Sox mixture of a true up-the-middle defender with prodigious offensive potential, is easing his way back in any form. In typical AL Central fashion, the division race didn’t go anywhere, as the Sox stumbled in Arlington on Thursday and everyone ahead of them lost, too. And in typical Sox fashion with their struggles against right-handed pitching this season, there was a qualifier to Robert’s happy postgame report.

“Feel good,” Robert said. “It wasn’t as hard as I was suspecting, but usually I feel good against lefties. The last at-bat against the righty was a tough one.”