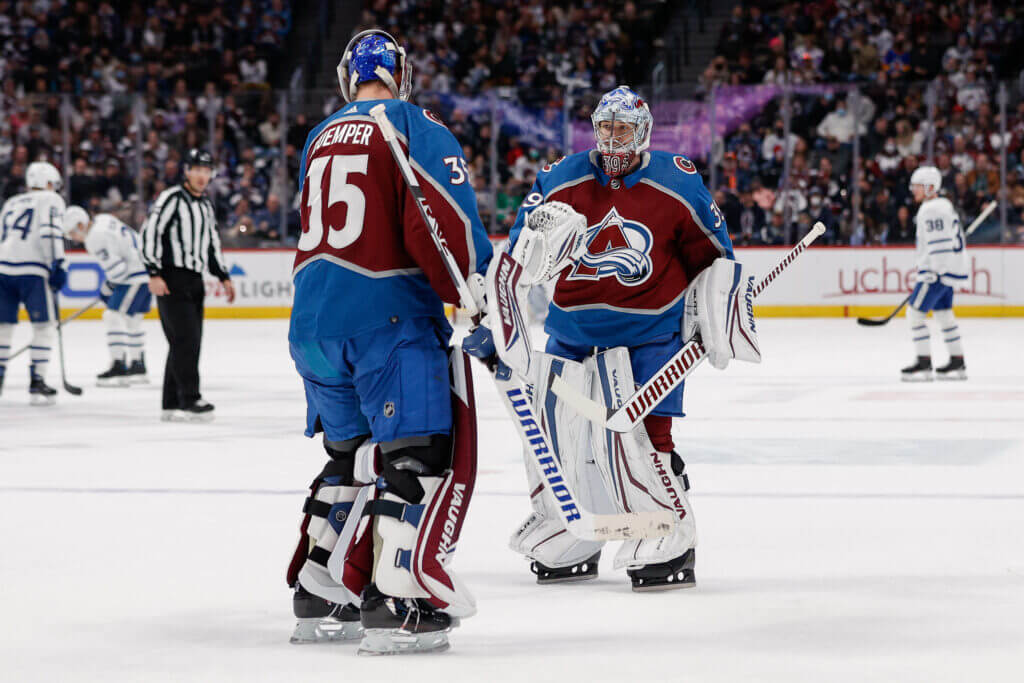 Darcy Kuemper stood on the ice, the grin he frequently sports even wider than normal. He had just completed the biggest game of his life, a 2-1 Avalanche win in a clinching Game 6 of the Stanley Cup Final, and he was still trying to comprehend the magnitude of his accomplishment.

The Avalanche goaltender had an inconsistent postseason, battling through an eye issue stemming from Game 3 of the first round, when Ryan Johansen’s stick got caught in his mask. And there were moments in the Cup Final during which he didn’t inspire confidence, like when he got pulled after allowing five goals in Game 3.

But when Colorado needed him most, he stepped up, making 37 saves in a crucial road Game 4 road win, then stopping 22 pucks in Game 6 to outlast the mighty Andrei Vasilevskiy. And in the elated moments of victory, with family members all around him, he’d answered the question looming over him all postseason: Was he good enough for the Avalanche to win the Stanley Cup? Yes, he was.

New questions always emerge, though, especially in the world of NHL free agency. Kuemper is at the center of one of Colorado’s biggest ones this offseason. He’s a pending unrestricted free agent, and general manager Joe Sakic and the front office have a decision to make. They want to bring Kuemper back, but they also have to do a salary-cap tightrope walk. With a bevy of other free agents they hope to re-sign, they’ll need to decide how much they’re willing to pay for their Cup-winning goalie.

Here a look at their options in net, with a look at potential pros and drawbacks:

The Avalanche and Kuemper’s camp have had discussions, but as of Monday morning, the team had yet to make a formal offer, according to The Athletic’s Pierre LeBrun. “I’ve heard there’s a decent chance he stays,” Elliotte Friedman said Tuesday on his 32 Thoughts: The Podcast. “I think they’re working on trying to get Kuemper and (Valeri) Nichushkin done.”

Kuemper had a strong regular season for Colorado, posting a .921 save percentage and a 37-12-4 record. His advanced metrics shined, as he saved 15.77 more goals than expected, according to Evolving-Hockey. That ranked sixth in the NHL.

His numbers also suggested he gained comfort in Colorado’s system as the year went. In 42 games after returning from an upper-body injury Dec. 8, he saved 22.42 more goals than expected, which was second only to Vezina Trophy winner Igor Shesterkin in that span, and he had a .926 save percentage.

Colorado paid a hefty price to acquire Kuemper last summer, trading its 2022 first-round pick, a 2024 third-round pick and promising young defenseman Conor Timmins. That was the cost of doing business after the goalie carousel had halted: The Avalanche deemed Philipp Grubauer too expensive to retain and watched other free agent goalies ink deals with other clubs.

If the Avalanche let Kuemper walk now, they run the risk of needing to overpay again, either in a trade or free agency. They’re in a Cup window and will need a legitimate No. 1. Yes, Pavel Francouz is a reliable tandem goalie, but he’s never shown the ability to be a full-time starter. He’s never played more than 34 games in a season, and of his 18 starts in 2021-22, only three came against teams that ultimately made the playoffs.

Kuemper’s postseason is one reason Colorado could be hesitant to pay too much to bring him back. He allowed 7.29 more goals than expected, according to Evolving-Hockey, looking especially shaky in the team’s second-round series against St. Louis. He finished with a .902 save percentage over the course of Colorado’s run, the lowest by a Cup-winning goalie since 1988.

Some of his struggles likely had to do with his eye injury. After the playoffs, coach Jared Bednar told Altitude Sports that Kuemper had to go to an optometrist daily to retrain his eye. That hopefully wouldn’t be an issue next season. And letting the goaltender go carries one large concern: Who is available to replace him?

Marc-Andre Fleury is the sexiest name in the free-agent goalie market, and LeBrun wrote in his recent rumblings column that Colorado “would be a nice fit” if the Avalanche are unable to bring back Kuemper. But Fleury comes with his own questions. He’s going to turn 38 during the coming season and had a pedestrian 2021-22 campaign with the Blackhawks and Wild. He had a .908 save percentage and saved 1.28 fewer goals than expected, per Evolving-Hockey. The Wild ended up benching him ahead of Game 6 of their playoff series in favor of Cam Talbot. It marked the third-consecutive season a healthy Fleury was on the bench when his team got eliminated. (Vegas had Robin Lehner in net when it was eliminated in 2020 and 2021.)

Fleury won the Vezina Trophy in 2021, though, and Colorado knows how dominant he can be when on his game. He was a big reason the Golden Knights eliminated the Avalanche in 2021. If Sakic feels Fleury can get back to that level, then he could make sense if the team doesn’t work a deal out with Kuemper.

Jack Campbell from Toronto and Ville Husso are the other notable pending UFA goalies. Husso had a strong season in St. Louis, posting a .919 save percentage, but does Sakic want to turn over the net to someone with only 57 career regular-season games? Campbell is excellent when on, but his inconsistency makes him tough to bank on.

Could the Avalanche try a big swing for someone like John Gibson? Sure, but he wouldn’t come cheap, and Colorado’s prospect pool is all of a sudden thin after the team traded Justin Barron and Drew Helleson at the deadline. Bowen Byram could be a star, so I don’t see the Avalanche moving him, and Alex Newhook is one of their main forward prospects. Both players feel close to untouchable.

And beyond Gibson, no one in trade rumors would likely move the needle for Colorado. Islanders netminder Semyon Varlamov likely isn’t getting moved, according to Friedman, and someone like San Jose’s James Reimer probably would not make sense as a No. 1 on a team hoping to go back-to-back.

Other odds and ends

• The Avalanche re-signed deadline addition Andrew Cogliano to a one-year, $1.25 million deal, according to a person with knowledge of the situation. Cogliano was a key member of Colorado’s bottom-six and penalty kill in its run to the Stanley Cup, and he also emerged as a team leader despite only being on the team for a few months. He helped lead a team meeting the night before the clinching Game 6 of the Stanley Cup Final.

• Should Colorado not retain Nazem Kadri, who could be in for a huge payday, I’d expect them to go after another forward capable of playing in the top six.

• For those asking, Erik Johnson isn’t planning on retiring. I asked him during the playoffs if that was something he was considering, and he said, “I want to play a lot longer. No plans on that.”

• The Avalanche are allowed to approach Nathan MacKinnon’s camp with extension offers starting July 13, and every move the team makes in the coming weeks will be with an eye on how it could impact flexibility with the star center’s next contract. He’s the top priority.

Move over Wimbledon, the real jewel of the British sporting summer is here