Artists work to fulfill their own creative itch, but that doesn’t mean there isn’t a desire for that work to be liked and valued. When that happens, and the art conveys a bigger message, that’s the pinnacle of art appreciation.

“As an artist, that’s your end goal,” artist David “DEZ” Zambrano said. “That’s like your Mount Everest, that’s your peak, for your art to speak to a cause. Not just to look good, not to just be aesthetically pleasing, but to actually lend itself toward change or at least direct people towards change, and that’s special.”

Zambrano and his partner, Mohammed Gafar, are the artists behind DEZ Customz and Kreative Custom Kicks.

The two visited their figurative Mount Everest this month when Golden State Warriors guard Stephen Curry wore a pair of one-of-a-kind shoes for Game 3 of the NBA Finals celebrating the 50th anniversary of Title IX while highlighting retirement pay inequality.

The shoe was part of a collaboration with UConn guard Azzi Fudd, who also wore the shoes to highlight how issues of gender inequality contribute to the gender gap in retirement pay. Gafar and Zambrano turned the Curry 4 Flotro from Under Armour into a colorful message for gender equality, with hand-painted shades of red, blue and yellow.

“It’s impact, pop, make the colors blend,” Zambrano said. “The shoe naturally has that reddish, coral upper so it was just how do we blend that in, how do we get that to coincide with the rest of the shoe and look good and deliver the message. It’s just putting pieces of the puzzle together.”

Fudd, who has known Curry since being invited to his basketball camp in high school. Fudd also became the first college player to sign an NIL deal with an NBA player when she signed with Curry’s SC30 Inc., in December.

Fudd was familiar with the designers’ work and knew the shoe would “come out looking amazing.”  The UConn star also shared that she has gained more respect for the four-time NBA champion by seeing Curry’s support for women in sports and his colorful shoes on full display in Game 3 of the NBA Finals.

“It’s one thing thinking about it and then seeing it for the first time,” Fudd said of the shoes. “It was really cool seeing it for the first time during the game on Steph, on TV, that was really cool and getting to hold a pair myself. The design, the colors I just love. The design, the details, I love everything about the shoe and it makes me even more excited to be doing this and it just shows everyone in this campaign how much he really cares.”

Curry and Fudd’s reaction was also gratifying for the artists, too. Gafar said they “loved” the shoe, how the colors complemented each other and how the phrases #RetireInequality and “we’re not done yet.” were highlighted. Two of the nine custom shoes were sold through NTWRK June 23 and 24 with 100 percent of the proceeds going to The Equity Project by the Women’s Sports Foundation.

“The message is what is important about this pair,” Gafar said. “The message is there, the colors pop and it just ended up being a cool pair and their reaction was awesome and they immediately put them to their feet. Steph wore them in the game immediately, Azzi wore them as well. It was just an immediate receiving of it and positive feedback, no changes needed to be made, nothing was missed. So I think we achieved what we were trying to do.”

Artists have benefited from the NBA removing color restrictions on shoes starting with the 2018-19 season. It’s allowed artists like Zambrano and Gafar to showcase their skills. In this case, it allowed them to share the message about inequality.

They’ve been in business for eight years, designing custom shoes for many athletes across different sports and have done a lot of custom work for Under Armour in addition to their concepts being on a variety of shoes.

They work in tandem with one designer taking the lead on a shoe. Their designs can be found on basketball shoes, baseball spikes, Chuck Taylor, Timberlands and more.

“Mo and I, we’ll share ideas, we’ll throw ideas back and forth,” Zambrano said. “I was the one to kind of have the luck of the draw on this pair so I actually put hands on it. We always share ideas. It’s kind of second nature at this point, we’ve been doing this for eight years.”

Players being allowed to do more with their shoes has definitely been a boost for the duo.

“Given those opportunities with how the NBA is a little more lenient now, players wearing not just all wild colors, but customized shoes such as these with messages on them, the fact that it is being allowed, that’s a celebration itself for us as the artists,” Gafar said. “We get to actually do something and it gets to be seen and highlighted now.”

Gafar said their designs were on players in prior years but they often weren’t shown prominently on television. Now you might see their designs in MLB (they designed a Bryce Harper MVP shoe), the NFL (wide receivers Justin Jefferson and Julio Jones are among the many players wearing their designs) or even in college where Shedeur Sanders has some custom pairs while playing at Jackson State.

“Now the shoe becomes a story in itself,” Gafar said. “I’ve seen time and time again where they zoom-in on the shoes and the announcers are talking about it, highlighting the shoe, look at the colors, look at the pop. They may not know what the message is at that very moment because it’s live, but it stands out and that’s just awesome as an artist to be able to see that and be responsible for it. What does any artist want? For their work to be recognized and seen by as many as possible.

“These are absolutely just golden opportunities for ourselves and we celebrate every chance.”

How a shoe comes together is primarily up to Zambrano and Gafar. The custom Curry was no different. It’s more about understanding what the message is and sharing it in a powerful way.

Fudd, who serves as a brand ambassador for financial services company TIAA and has an NIL deal with Curry’s brand SC30 Inc., said the collaboration was a great way to make the retirement income gap a discussion. She said her engagement, largely on Instagram where she has 214,000 followers, and has picked up as it pertains to the topics of pay equity. 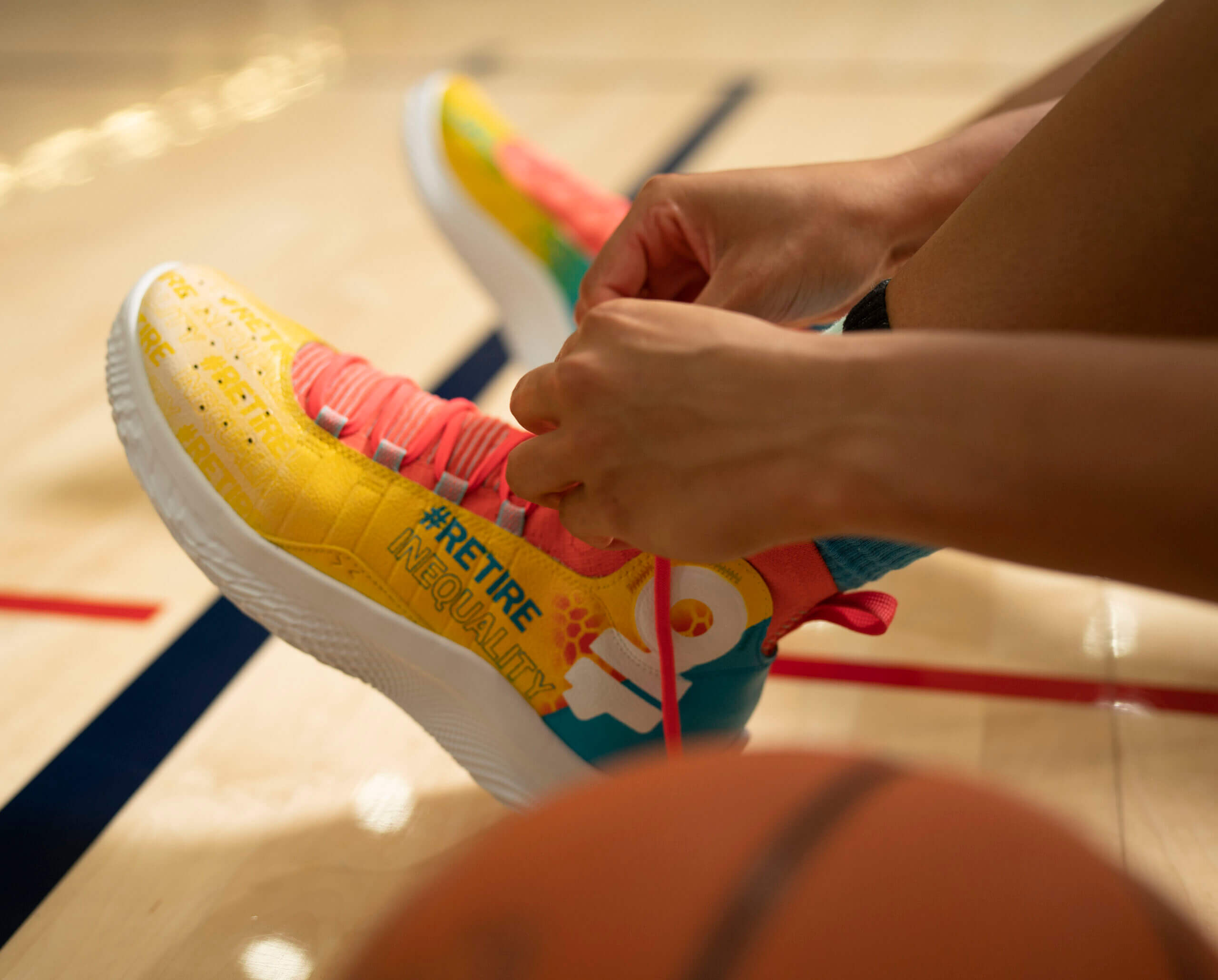 This proved to be an ideal vehicle and time to spark discussion.

“I really want to try and use my platform to spread awareness,” Fudd said. “And I think I’m just starting to find my voice and find my passions and what I want to use my voice about and for. And for the future I plan to continue to use my platform, use my voice to speak out on things but there’s nothing planned so far. But once I find those things and those opportunities, campaigns, programs roll around, I for sure will.”

Women, on average, make 30 percent less in retirement income, which is rooted in the history of pay inequity. This makes it harder for women to save for retirement, which is problematic given women tend to live longer than men and are more likely to have caretaker duties.

As Fudd, 19, prepares for her sophomore season at UConn, she realizes there is an opportunity to shed more light on issues she finds important. Learning about the disparities women face in retirement income is “disappointing” but not shocking, she said.

While some of Gafar and Zambrano’s designs didn’t make the big screen, those “letdowns” make moments like Game 3 of the finals special. They believe this shoe can spark discussion beyond this year’s playoffs.

“(The shoe can be) part of history, something that people will be able to see years from now, God-willing, change happens from this,” Gafar said. “We won’t be saying the change happened from us, but to be a part of it, in a small little sense we got to be a part of history that later we can talk about and share with our kids and generations to come.”

If the design is still being talked about years from now, that will be extremely gratifying for both artists. That means their work has resonated with a broader audience and had the impact they hoped to achieve.

When that happens, the moment will come “full circle,” Zambrano said.

“As an artist, of course, you want to be recognized because if you don’t paint you don’t eat,” Zambrano said. “But the fact that you can lend your skills toward change, to promote change and to get behind it, that makes it all the more meaningful and all the more special. And as an artist, that’s what you work for, that’s the point. This is what you do.”