Bali Mumba breezes into the broom cupboard of an interview room at Carrow Road with a smile on his face, but you can tell he has had a tiring night.

The right-back had just completed 90 minutes for the first time since the middle of March and the in-game treatment he received for cramp told its own story.

Mumba, 20, was appearing for Norwich Under-23s in their final Premier League 2 Division 2 game of the season. It was an important game too, with Norwich’s promotion play-off hopes at stake.

They lost 2-0 to Wolverhampton Wanderers but, thanks to Burnley’s defeat at Fulham on the same night, still qualified for a shot at the top division next season. They will travel to Molineux to face Wolves once more in Tuesday’s single-leg semi-final, and Mumba is set to feature again.

“It’s been an interesting time for me,” Mumba tells The Athletic. “It happens in football and I’m glad to be back and getting involved. Just to get a run, play football again and do what I usually enjoy doing.

“They (the under-23s) are all great players. They’ve all got potential and there’s nothing bad I can say about them. It’s a great set and they’re great on the pitch. I think this is the first time for the team to be challenging like this (for promotion), so I’m happy for the lads and I just want to play my part in helping the team reach its objective.”

It has been an interesting season for Mumba, who has more than enough to prove between now and the beginning of the Championship season at the end of July. 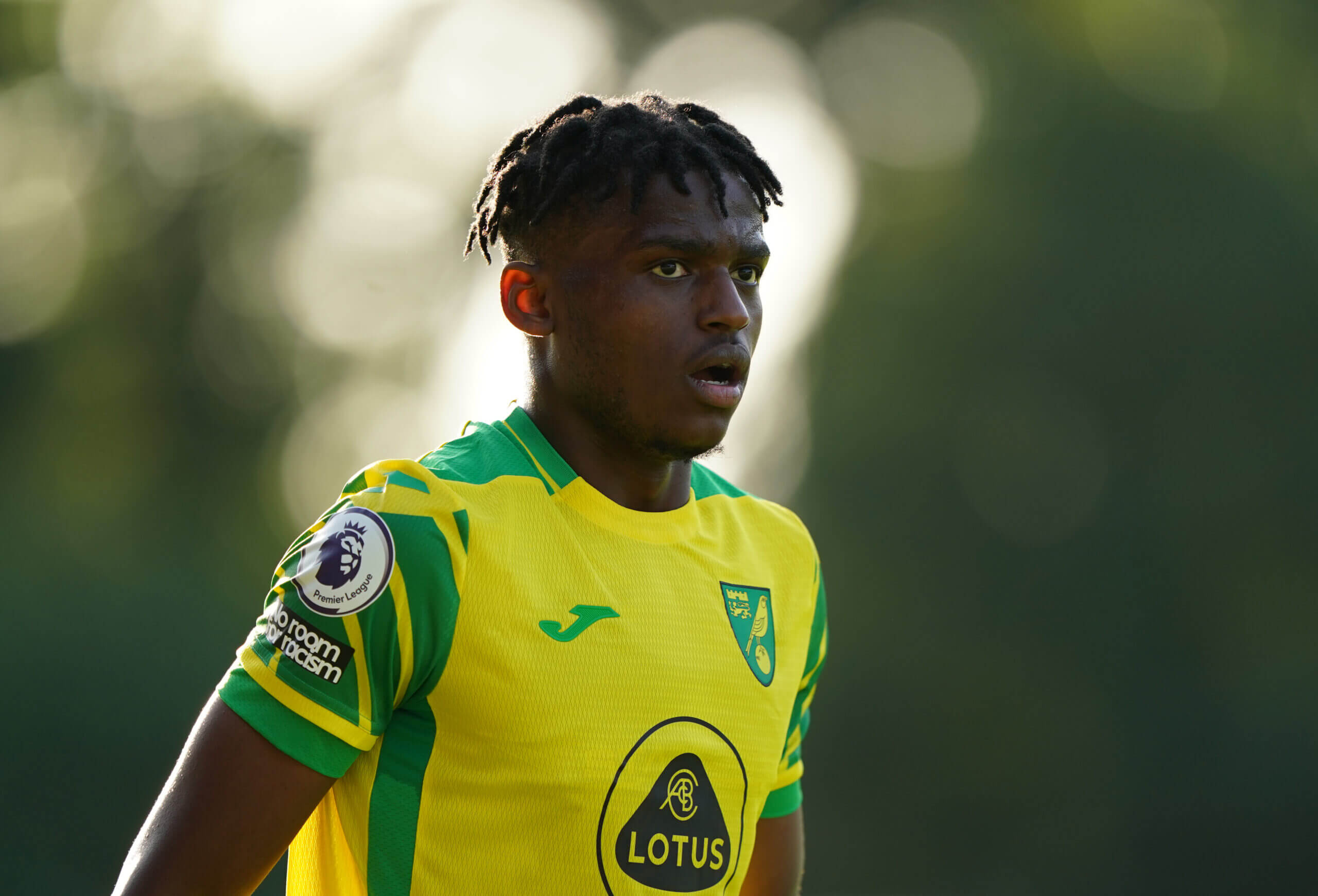 It feels a long time ago now that Mumba was making his Premier League debut as a half-time substitute at the Etihad Stadium in August. He was introduced at left-back in place of Dimitris Giannoulis, who had been caught out as Manchester City led 2-0 at the break.

The pattern repeated in the second half, however, as Mumba endured a similar experience and Norwich lost 5-0.

Mumba then joined Peterborough United on loan in January, a newly-promoted Championship side struggling to avoid a swift return to League One. It seemed an ideal opportunity for him.

The defender scored a fabulous individual goal on his debut in the FA Cup, and made another in the following round. Mumba played all 90 minutes of Peterborough’s first five league fixtures he was available for.

However, they were also winless, with 15 goals conceded. Their only point came in a 2-2 draw at Birmingham, where they were leading 2-0 with five minutes remaining.

After that, Mumba started only two of the next 16 games — a run that included the departure of Darren Ferguson as manager at the end of February.

Peterborough’s relegation was confirmed in late April after a 1-0 home defeat to Nottingham Forest, with two games left to play. Peterborough opted to end Mumba’s loan at that point, allowing him to return to action and help out Norwich’s under-23s.

“It’s been a learning curve,” Mumba tells The Athletic. “That’s what I needed. I believe I learned something big and I will always carry that experience with me. It will help me in the long run to get my head down and look to get into the team here.

“It’s that consistency. It’s something I probably needed to learn and it will be important. A manager has got to be able to trust you and for him to do that, you have got to be consistent on the pitch. That will give you the chance to earn the shirt.”

Mumba adds: “You need to find uncomfortable situations comfortable, that is when you know you are testing yourself. That’s how I see being consistent. It’s being somewhere where I am still testing myself.”

That was certainly the case with Peterborough’s late collapse at St Andrew’s.

“When we played Birmingham I’m thinking, ‘Yeah, it’s done’. We’ve got the points,” says Mumba. “My first win at Peterborough. But just like that, things change so quickly. They score one, then another. That feeling then, at the end…that will always stick with me.

“Until the job is done, you have got to always stay focused and not switch off one bit. Just know that the job is not done until the final whistle. I had got a bit excited thinking we’d done it but… I take that with me now.

“When you are coming off the pitch, especially when you are playing first-team football week in, week out, you start to understand how much winning means. You could have a bad game but as long as the team gets three points, that’s the most important thing. Going out on loan you get to understand that and as a young player, you need to understand that. A win is literally everything.”

It was not quite the ending Mumba had hoped for after such a bright start to his time at London Road and his debut goal. He also got to reappear at the Etihad Stadium in the FA Cup fifth round, again as a substitute. Peterborough lost 2-0.

“Obviously it was a great debut for me but I don’t really like looking back too much on what I have done. I’d rather focus on what’s ahead of me,” says Mumba. “But every time I do see it back, it always makes me happy. I can still remember it as if it was yesterday, getting my first goal.”

No sooner had Mumba driven back to Norwich from Peterborough than he was drafted into under-23s training and within 24 hours he was playing against Wolves.

A conversation with first-team head coach Dean Smith had to wait until later. Mumba has since completed a fortnight of training with Norwich’s senior players, although he is ineligible to play for the first team until next season.

Max Aarons has been Norwich’s first-choice right-back for four seasons but is now expected to become the subject of close-season transfer speculation. He is likely to leave the club that has developed him since the age of 16.

Sam Byram has adapted to his shift at centre-back in recent matches but is still expected to return to his full-back responsibilities come next season. It means Mumba will either be looking to compete with Byram as cover for either full-back slot, or a further loan could offer him the chance to continue to develop his game.

Given the lack of game time Mumba ended up with at Peterborough and his shortage of fitness and sharpness against Wolves’ development side, it is already shaping up to be an important summer for the former England Under-19 international.

However, Norwich also know Mumba has already got it in him to shine in a support role in the Championship — as he did last season against Swansea before a knee injury ended the chance of any prolonged impact.

“The plan is to just finish off the season here as strongly as possible and then it’s starting preparations for the new season,” says Mumba. “Hopefully if I do well enough, I can get a chance then to impress.”

Mika Zibanejad, Chris Kreider get the Rangers to Game 7