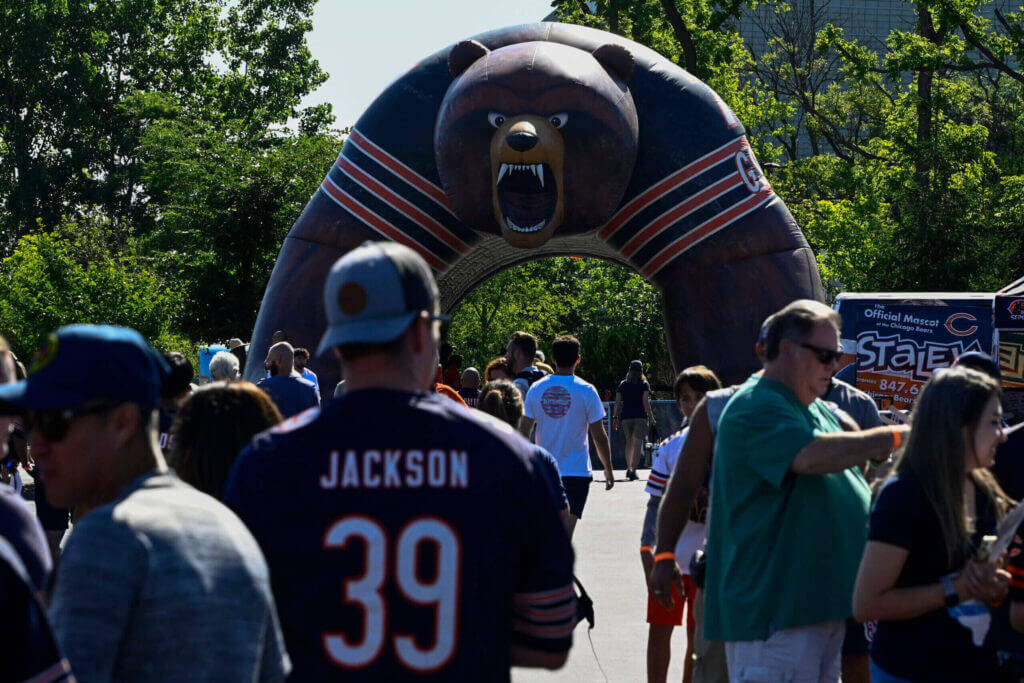 CHICAGO — Roquan Smith walked onto Soldier Field in his No. 58 jersey. He talked with Bears staffers on the sideline and did some stretching and conditioning with the other injured players.

It’s what he’s done throughout training camp. The only difference is on Tuesday morning, he requested a trade from the team that drafted him.

The Bears’ star linebacker has not spoken to the media. He’s on the physically unable to perform list. But he made his request through NFL Network.

General manager Ryan Poles did talk Tuesday and expressed his disappointment that negotiations had reached this point of acrimony.

“My feelings for Roquan haven’t changed at all,” he said. “I think he’s a very good football player. I love the kid. I love what he’s done on the field, which makes me really disappointed with where we’re at right now. I thought we’d be in a better situation, to be completely honest with you.

“In terms of our philosophy in the front office, I’ve always believed and always will that we take care of our homegrown talent. We pay them, we take care of them and we take everyone for what they’ve done and what they can become in the future. And with this situation, we’ve showed respect from a very early timeframe and with that said, there’s record-setting pieces of this contract that I thought (would) show him the respect that he deserves, and obviously that hasn’t been the case.

“With that said, we can’t lose sight that this isn’t about one player. My job is to build a roster that’s going to sustain success for a long period of time. At the end of the day, we’ve got to do what’s best for the Chicago Bears.”

Roquan Smith has requested a trade from the Bears after not getting a new contract as he enters the final year of his deal.

Smith says Chicago’s front office “doesn’t value him” and that he “doesn’t see a path back.”https://t.co/V1rfCGinPI

Poles did say he intends to re-sign Smith, but also noted how it’s been “difficult” to negotiate with a player who is representing himself.

“There’s emotions involved and it’s tough,” Poles said. “It’s a very unique situation that we’ve had to deal with and I thought we’ve done a pretty good job, which again that’s why I’m a little disappointed we’re at this spot.”

Poles wouldn’t discuss contract figures but said, “we brought it” in regard to the Bears’ proposal.

Asked about Smith being present with the team, Poles responded, “I think he wants to be a Chicago Bear.”

Head coach Matt Eberflus said he talks to Smith daily — though they had not spoken yet on Tuesday.

“Things in this business happen,” Eberflus said. “There’s few things that surprise you. You take it for what it is and you move forward, and that’s what you do. So I really didn’t have any reaction. I was disappointed in that, but that’s where it is right now. We’re working forward. Ryan’s going to be working forward with Roquan, and we’ll see where it goes.”

There has been plenty of turnover in the locker room, but Smith is a leader and his teammates will want him back on the field, even those who have only been here a few weeks.

“He’s one of the best players in the NFL,” offensive tackle Riley Reiff said. “I’ve played against him how many years now and just what he brings, the leader, the type of guy he is in the locker room, we want him here.”

On the field, the Bears held their annual Family Fest practice at Soldier Field. Here are some news, notes and observations.

No major change to the list of Bears who were sidelined after Monday’s off day. Rookies Kyler Gordon and Velus Jones Jr. remained out, but are still both considered day to day.

Wide receiver N’Keal Harry will be out for some time with an ankle injury, Eberflus confirmed. There is no timetable.

To add to the depth issues at receiver — a thin position to begin with — veteran David Moore went down with an injury during one-on-one drills and had to be carted off.

When Lucas Patrick is healthy, he’ll step back into his role as the starting center.

When Reiff arrived, he originally lined up at left tackle, the position he’s spent more time at in the NFL.

“I’ve got experience on both sides,” he said. “I played two years on the right, played a bunch of years on the left. I’m just here to help the team win.”

Reiff spoke glowingly about Jones, the rookie fifth-round pick who’s in line to be the Day 1 starter at left tackle.

“Braxton, he’s a super-talented individual,” Reiff said. “He’s experiencing some good edge rushers with Robert (Quinn) and those guys. As a rookie, it’s hard, man. But it’s good to take those lumps now. But he’s holding his own. The ceiling is super high with that kid. Long, can move, smart. It’s just seeing some mental things, seeing a lot of reps, seeing what’s coming, and he’ll be all right.”

There was a switch for the second-team unit. Larry Borom went back to left tackle and Teven Jenkins — participating in his first team drills of camp — lined up at right tackle. On a run play, Jenkins did a nice job moving his man a few yards down the field.

The first-team offense was in a “need a touchdown” end-of-game situation. Quarterback Justin Fields opened it with a 16-yard pass over the middle to wide receiver Equanimeous St. Brown.

Fields was sacked on the next play before finding tight end Chase Allen for a short gain. On third down, Fields found wide receiver Darnell Mooney for a first down.

After a couple of completions to tight end Rysen John, the clock wound down to the final seconds. Fields scrambled out of bounds, keeping an eye on the clock as it stopped at two seconds — in a game, it might have been a sack for Quinn.

The final play reflected the attrition the Bears are dealing with at wide receiver and tight end. Cole Kmet wasn’t in team drills for an undisclosed reason, and the two veteran tight ends were out. Several receivers were sidelined.

• Quinn opened the pass-rush reps against Jones and won, but not as handily as he did last week. He did show off his rare speed and bend around the edge when beating offensive tackle Shon Coleman.

• Defensive end Trevis Gipson had a nice rip move to get the edge against Reiff.

• Borom showed off his footwork not letting rookie defensive end Dominique Robinson get inside.

• On his first rep, Jenkins got pushed off balance by defensive end Mario Edwards Jr., who then burst through inside. On the next one, though, Jenkins stonewalled Carson Taylor’s attempted spin move.

• Mooney had the play of the day with this one-handed catch down the right sideline.

• In the first set of team drills, the passing game didn’t have much success. Fields overthrew Sharpe on a deep route.

• Cornerback Jaylon Johnson had tight coverage with Mooney and broke up a pass down the left side.

• Linebacker Matt Adams dropped an interception when Fields rolled out on play-action and tried to sneak a pass between defenders.

• The run game was productive in 11-on-11 — David Montgomery had two long runs and Khalil Herbert added one of his own.

• The offense faced a pair of fourth-and-goal situations at the end of practice. On both plays, Fields scrambled and then ran it in for a touchdown, juking a defender on the first one.

• Cairo Santos hit all his extra points and also made a 48-yard field goal into the south end zone.

Chelsea strikers continue to leave with Tuchel short of replacements

Sonic The Hedgehog 3 Film Now Has An Official Release Date