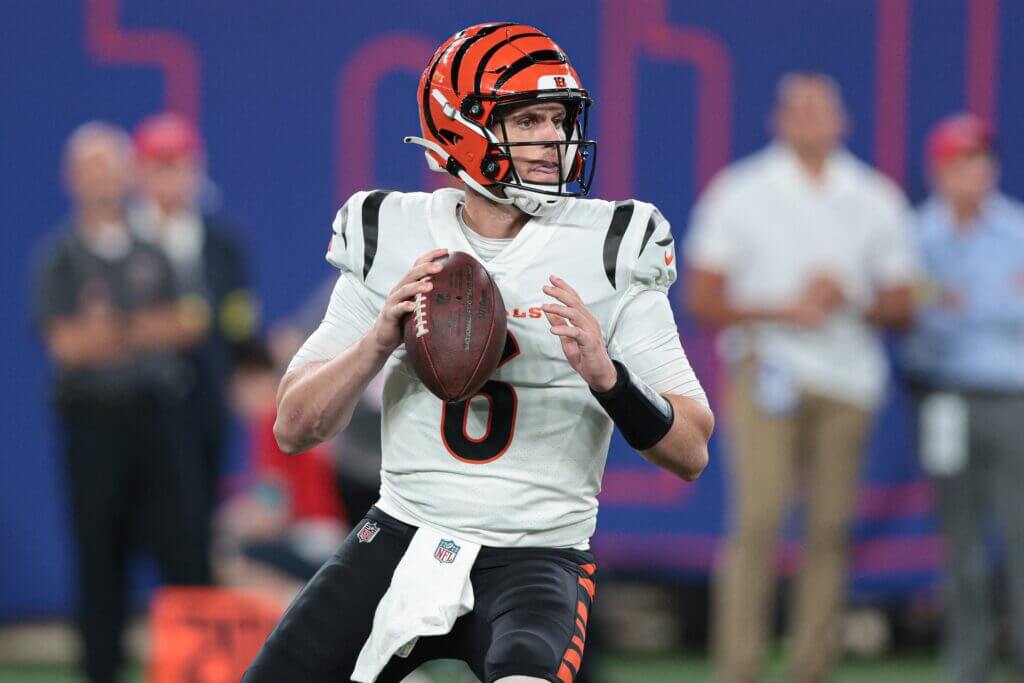 The Bengals avoided a winless preseason Saturday night with a 16-7 victory against the Rams, and, more importantly, steered clear of risk by not playing any starters and only a few key backups.

Next on the agenda is the cutdown to the 53-man roster, with the final decisions due by 4 p.m. Tuesday. Most of the verdicts were rendered, if not announced, long before kickoff Saturday night.

But one performance at a key position could spark an upset when the final cuts are revealed.

Here is my prediction for what the 53-man roster will look like:

Analysis: With local product and feel-good story of the preseason Drew Plitt released a few days ago, this one felt academic going into Saturday. But for the third time in three games, Jake Browning outplayed Brandon Allen and staked his claim to the backup job.

“I thought he did a nice job,” Bengals head coach Zac Taylor said of Browning, who was 19 of 24 for 173 yards with one touchdown and no interceptions. “He did a great job of moving us down the field, especially there at the end of the game when it got tight. They scored to pull within three. We threw the ball every play and he made every play. He scrambled around, made plenty of plays with his feet. Made some plays on the move. Threw on time. I thought it was well done by Jake.”

That was a 13-play, 75-yard drive that upped the Bengals’ lead from 9-7 to 16-7 in the fourth quarter.  After the game, The Athletic’s Paul Dehner Jr. asked Taylor if Allen is the backup, and the coach gave a 49-word answer, none of which were “yes.”

“Those guys have competed all training camp,” Taylor said. “We’ve got a lot of confidence in Brandon. He’s got years in the system. He does a really good job operating our team. I think both of those guys have done a nice job, done what we needed them to do.”

I’m still leaning toward Allen here, as Browning has never appeared in a regular-season game. Allen has game experience and his role as a sounding board for Burrow can’t be overlooked. But this one could be really interesting come Tuesday.

Analysis: The “where” is as interesting as the “who” here, as Evans looked poised to supplant Perine as Mixon’s primary backup, but he hasn’t developed in pass protection as fast as the coaches had hoped. The biggest question here is whether the Bengals go with three or four backs. Williams was a special teams contributor in the five games he was active last year, and he’s been involved in the preseason as well. He might be No. 53 on the 53-man roster, but that beats No. 1 on the practice squad.

Analysis: I had Lassiter on my initial 53-man projection, and nothing he’s done since then suggests he doesn’t deserve a spot. But he’s a victim of circumstance. Every time Darrin Simmons put him back to return a punt in the first two preseason games, the ball was unreturnable. But this is less about Lassiter beating out Taylor than it is him earning the spot over running back Williams. The Bengals have kept seven wide receivers each of the last five years, but it feels like that streak ends this year. As impressive as Lassiter and fellow undrafted rookie Pryor have been, there’s no great fear of them being claimed if cut. And even if one is, the Bengals can feel good about bringing the other one back on the practice squad.

Analysis: If you’re setting betting odds on what position the Bengals could target in a trade or waiver claim, tight end would be a close second to cornerback. If anything happens to Hurst, they don’t have anything close to him in terms of play-making ability. Moss is the closest thing, so perhaps the Bengals go with four here, but his bubble status hinges mostly on Wilcox’s ankle injury. If the team puts Wilcox on Injured Reserve on Wednesday, Moss would be re-signed to the 53. If Wilcox is on pace to be healthy well before Week 4, they could just cut Moss and go with two tight ends and keep Lassiter or Pryor as a seventh receiver.

Analysis: Carman played every snap in the preseason finale Saturday, which tells you all you need to know. And he had a holding penalty and allowed a sack against Rams defensive linemen who won’t be making the team. At this point, cutting Carman isn’t totally off the table, although it still would be a long shot for them to give up on a second-round pick in his second season. Regardless, Volson will be the starter in the opener against the Steelers.

Analysis: Kareem’s hamstring injury – and the play of rookies Gunter and Carter – moves him closer to the bubble, but even if he’s a casualty, Spence would have a better chance of being the 10th guy in the room than Shelvin, last year’s fourth-round pick. The Bengals certainly would have interest in bringing Shelvin back on the practice squad, but if he ends up claimed it would be met with little more than a shrug. This is another position group where a player not currently on the roster could enter the equation.

Analysis: An interesting move earlier this week involved the team putting safety Brandon Wilson on the Reserve/Physically Unable to Perform list – mandating he misses at least the first four games – rather than Bachie. Both players suffered season-ending knee injuries last year, but Bachie’s came five weeks after Wilson’s. It likely was a matter of only needing to clear one spot, so Bachie is still a candidate to be placed on Reserve/PUP as well. Johnston has played well enough in the preseason – 20 tackles vs. the Giants! – to earn the fifth spot, or at least be a placeholder until Bachie gets back up to speed.

Analysis: The Taylor-Britt injury opens the door for either Davis or George if the Bengals don’t swing a trade or make a claim to add depth in the room. If they don’t acquire corner, either Davis or George could be added to the 53 on Wednesday in the likely event Taylor-Britt goes on IR. George, an undrafted rookie, has had a lot of moments in both practices and preseason games, but reading between the lines when the coaches talk about him, he still has a way to go. Ideally, he spends this year continuing to grow on the practice squad. Davis appeared in 15 games last year, mostly on special teams, earning Simmons’ trust. And he’s the better option to back up Hilton in the slot.

Analysis: It was a great run for Huber, but Chrisman clearly has been the better punter this summer. Only a dropped hold and a couple of shanks Saturday night could have derailed his bid, and that didn’t happen. Buffalo and Indianapolis each need punters. It will be interesting to see whether Huber hangs ’em up or tries to continue his career with another franchise. Either way, he will maintain a share of the franchise record for games played (with Ken Riley at 207) until Harris breaks the mark later this year.

Three Dutch commandos wounded in shooting outside US hotel | US news