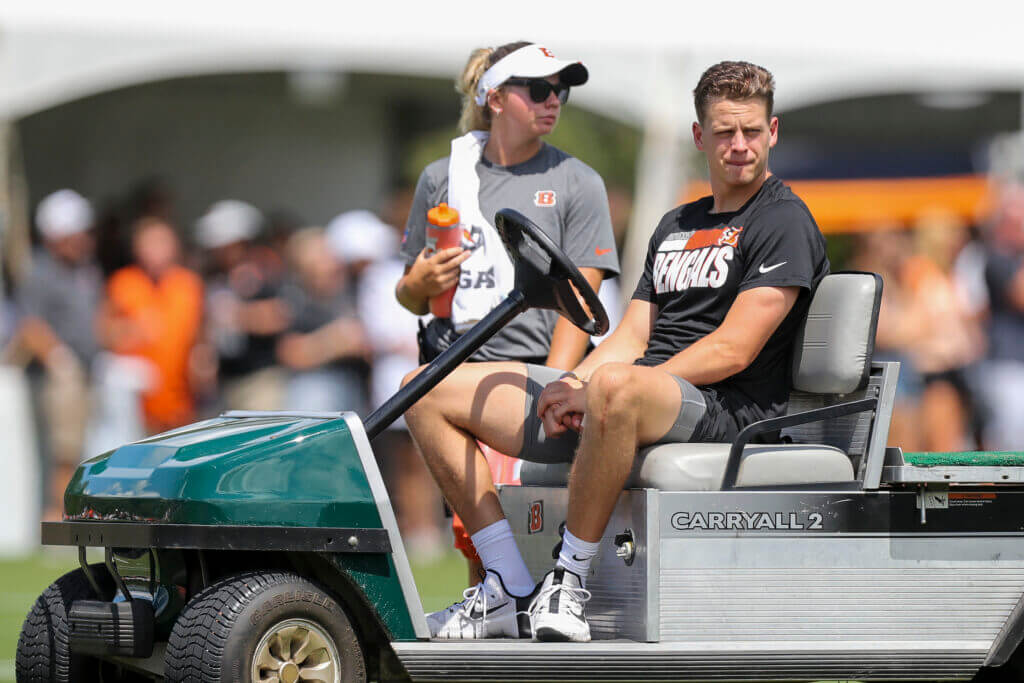 Comments from Joe Burrow’s father, Jimmy, on Dave Lapham’s “In the Trenches” podcast, indicated the quarterback’s appendectomy was more than the bread-and-butter procedure many expected it to be and that his full recovery could still be a few weeks away.

Bengals head coach Zac Taylor continued to sidestep questions about a timeline, but he showed little concern about where Burrow is in the process and whether he will have enough time to be ready for the start of the regular season Sept. 11 against the Steelers.

“I think what you see is what you get. He looks good to me,” Taylor said after Monday’s practice, during which Burrow was not relying on the golf cart to get around, doing some light tossing and, at times, jogging from station to station.

“He’s starting to get better every single day,” Taylor added. “Again, I don’t want to put a timeline on when he gets out here and starts throwing and stuff, but it’s been encouraging. He’s back to himself in meetings and looking good. I’ve never had that surgery; don’t know how it feels, so not going to make any predictions. But we’re excited about the progress he’s making.”

Keeping the timeline open-ended not only prevents questions about a setback, it also keeps the pressure off Burrow to try to meet any sort of predicted return date. Appendectomies are common procedures, but recoveries can vary from person to person.

“He knows himself way better than we do,” Taylor said. “I trust the communications with him when we’re going to get him back out here. In the meantime, we’re getting good work with these other quarterbacks. We’ve got plenty of time before the opener, and I trust that we’ll have a good process in place.”

The Bengals barely played Burrow in the preseason last year while he was recovering from ACL surgery, limiting him to three snaps in the finale against the Dolphins. He didn’t have trouble flipping the switch when the regular season hit, throwing multiple touchdown passes in each of his first eight games.

With the way the league is trending, we may never see Burrow take another preseason snap the rest of his career. So there’s zero sense of urgency in getting him ready to take any sort of live-action snaps before Sept. 11.

“Do I need to see him? No. Has the decision been made on how much we play those guys? No,” Taylor said before following up with some tongue-in-cheek recollections. “He played three plays last year, threw one screen for a negative-25 yard loss, almost had four injuries and so that was all he did last preseason and he started pretty good.”

“That’s a big deal, that field goal stuff, to make sure everybody’s on the same page,” special teams coordinator Darrin Simmons said. “We ended up winning three games because of the way we executed down the stretch. In the Tennessee game, when we moved the ball to the right hash. Same thing happened in the Kansas City game the very next week, just by executing the timing of things at the end of the game.”

Simmons covered all options Monday, from the Bengals spiking the ball to stop the clock, to standing over the ball waiting for the results of a replay review to running on the field with the clock ticking and no timeouts — which is what he calls “Toro Toro.”

The Bengals forced overtime against the Seahawks in a 2015 win by executing the “Toro Toro” drill, and they did it again the following season in the opener against the Jets, just before halftime.

Simmons continued to mix up the snapper/holder batteries with incumbents Clark Harris and Kevin Huber and challengers Cal Adomitis and Drue Chrisman. Ultimately, he said, the competitions come down to how kicker Evan McPherson does, and Monday he was five-of-five to raise his camp totals to 35-of-36, with the lone miss hitting the upright from a little more than 40 yards on Back Together Saturday.

“I think they’ve both done well,” Simmons said of the holder competition. “Obviously, I trust Kevin doing that. He’s very experienced at it. Drue is somebody who’s had to come on. It’s an area that he needs to improve on, and I think he’s shown great improvement there.”

Huber and Chrisman also took turns booming punts Monday, with Chrisman showing off his stronger leg with a couple of 65-yarders. But Simmons said he is looking for more consistency from both punters.

“I think they’ve been inconsistent to a degree, both of them in various fashions,” he said. “I think Kevin’s probably working his way back into the timing of getting a live snap and everything live happening. There’s a certain degree of timing and feel that comes into that. I think Drue’s been hitting the ball strongly, but we’ve got to refine some things. We’ve got to refine placement, we’ve got to refine hang time. But I think in terms of power, his strength certainly shows up.”

New face in the mix?

The other big battles Simmons is monitoring are at kick returner and punt returner, and a new face entered the fray Monday. Sort of.

Cornerback Chidobe Awuzie was returning kicks in a two-on-one drill against a pair of defenders, cutting, spinning and reversing field.

Awuzie said he was practicing his returns for when he makes interceptions.

Chris Evans took over the kick returner job in the playoffs last year and is listed first on the team’s first unofficial depth chart, which was released Monday. Trent Taylor is listed as the punt returner. Friday night against the Cardinals, Simmons and the rest of the staff will get to evaluate Pooka Williams and undrafted rookie Kwamie Lassiter on kick and punt returns.

“We’ll get a good look at those guys for sure,” Simmons said. “I know what we’ve got in Trent. I feel very comfortable with Trent. So we’ll get a chance to see those other young guys in action. Pooka didn’t get a chance in the preseason (last year). He had a hamstring for a big portion of camp.

Simmons said he’s been impressed with what Lassiter has done thus far, but the preseason games are what really matters.

“We can see him do all the stuff, catch, move around a little bit out here. But I think the true test is when the live bullets are coming,” he said. “What does he do when he’s running full speed? Can he make somebody miss? Can he handle the ball? Can he make good decisions? The true test is what returners do on game day.”

The same is true for everyone else on special teams, with so much of the practice drills run at less than full speed.

Defensive end Sam Hubbard got a veteran day off, but that didn’t stop him from getting a workout in the heat and humidity. Hubbard was hitting the ropes and doing other drills on the rehab field.

Offensive lineman D’Ante Smith missed his second consecutive practice, and Taylor said he’s day to day with a back issue. Defensive end Wyatt Hubert (undisclosed) also sat out but was doing rehab work on the side field, along with Hubbard and Smith.

Safety Brandon Wilson (knee) and linebacker (Joe Bachie) remain on the physically unable to perform list, while right tackle La’el Collins (back) is still on the non-football injury list.

Rookie second-round pick Cam Taylor-Britt was limping after practice, but it appeared to just be minor cramping as no one from the training staff approached him.

• Simmons spent a lot of time after practice catching up with former punter Kyle Larson, who made the drive from Indianapolis, where his son Nolan is playing in the Little League World Series Midwest Regional for the Nebraska team. Larson spent five seasons with the Bengals from 2004-08, averaging 42 yards per attempt, which ranks fourth in team history.

• Awuzie had two pass defenses against Ja’Marr Chase in one-on-one drills and finished the day 3-0 against Chase after the receiver also slipped on a route. Awuzie also had Chase blanketed on a play in 11s, but Brandon Allen threw his best pass of a practice for a perfectly timed back-shoulder grab.

• Trenton Irwin had two of the easiest catches in the session after completely losing cornerback Delonte Hood on both routes.

• Taylor-Britt flashed for the third day in a row, this time in the run game. On a jet sweep to Taylor on third-and-1, Taylor-Britt came downhill and stopped Taylor in the backfield for a tackle for loss.

• The Bengals will be off Tuesday before returning to action Wednesday for the final practice before Friday’s preseason opener.