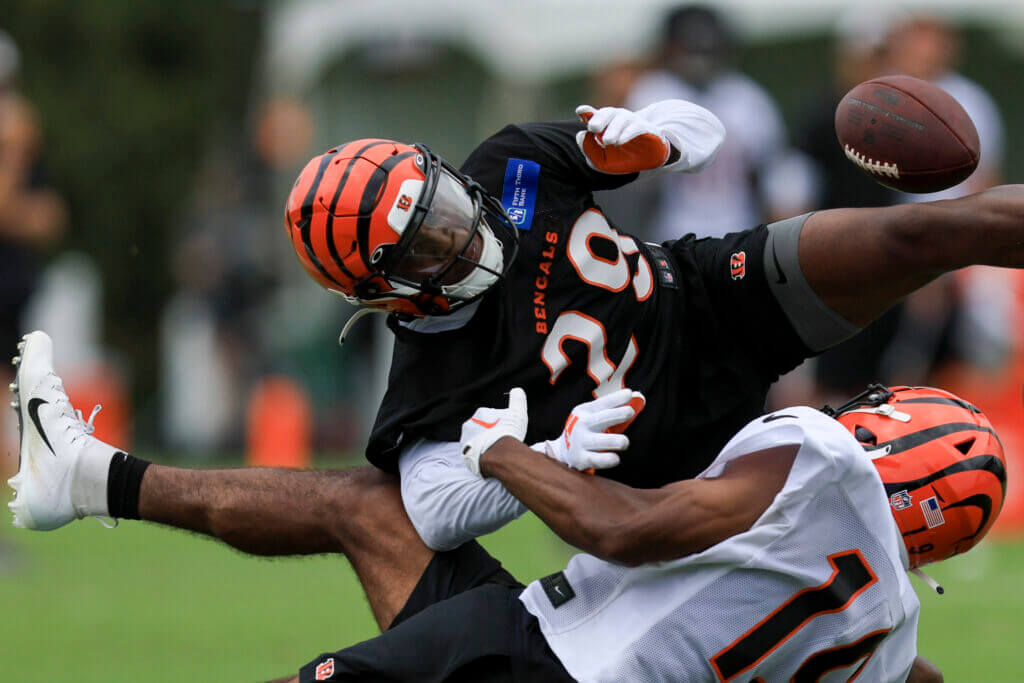 There was nothing especially scintillating about the Bengals offense Friday, save for maybe Brandon Allen’s best throw so far in camp when he hit Ja’Marr Chase in stride on a deep corner route. But after Thursday’s awful performance, simply being average was a step forward.

By my unofficial count Thursday, the offense had 18 completions while allowing eight sacks and committing eight penalties.

“It’s the penalties that really end up bothering you the most at the end of the day,” coach Zac Taylor said before Friday’s practice. “That’s stuff we’ve got to clean up, which we will. Sometimes you need some of those hiccups to be able to refocus our energy on some things.”

Friday was a shorter practice with fewer reps, but committing zero penalties was a win for the offense. There was a lot of pressure on the quarterbacks as well, but there were two more interceptions and nearly a third.

Safety Michael Thomas — aka Uncle Mike — grabbed his second interception in as many days, both of which came off deflected passes. Friday’s tip of a Jake Browning pass was provided by undrafted rookie corner Allan George, who was in coverage against undrafted rookie wide receiver Jaivon Heiligh. Thomas lit up the sideline when he made a diving stab of the deflection just before going out of bounds.

📈 Assessing expectations for the #Bengals defense.

The near interception was a terrific play by rookie cornerback Cam Taylor-Britt on a deep corner pass intended for Trent Taylor. The ball was overthrown, but Taylor-Britt leaped and nearly snagged a one-handed pick.

It was one of a handful of strong plays by Taylor-Britt, who had some rough moments in the last two practices, including playing behind the undrafted George on Thursday with starter Eli Apple sitting out all team drills. Defensive coordinator Lou Anarumo said not to read anything into that, and Taylor-Britt shared Apple’s first-team reps with Tre Flowers.

Taylor-Britt also sniffed out a screen to undrafted rookie Kendric Pryor and got to him for what would have been a tackle for loss.

Taylor said Burrow remains day to day when it comes to participating in practice after his July 26 appendectomy, and that the team isn’t trying to get him involved with calling plays or anything beyond just listening to the radio communications.

“I don’t think that’s necessary for him,” Taylor said. “I think he’s been locked in and focused. He’s in the meetings and helping lead like he was today. He’s been plenty engaged, and I don’t think we need to stimulate him. He does a great job there.”

Taylor declined to speak for Burrow in terms of how he’s feeling, but he said there is no need to rush his return.

“I hate to put a timeline on it,” Taylor said. “He’s getting a lot of good mental work right now.”

“Probably be a couple of weeks for him. Probably dodged a pretty big bullet there,” Taylor said. “Just got rolled up. It’s hard to see on the tape. Hard for him to remember exactly how it unfolded. We’ll just give him some rest.”

Mitchell Wilcox will slide into the second tight end role, and Thad Moss moves up to third tight end. Moss has been much more involved in the passing game the last couple of days, and this should give him a chance to do even more.

In what was supposed to be the only real competition for a spot in the starting 22, left guard has appeared to be Jackson Carman’s job to lose.

The second-year player is battling rookie Cordell Volson, but Carman has been taking all of the first-team reps.

Asked whether Carman has taken a step forward in the competition, Taylor wasn’t yet committing to an endorsement.

“I think all those guys need to continue to grow there,” he said. “That’s the beauty of training camp. This will be our third day in pads, and so for those guys, you know, there’s a long ways to go to evaluate these guys. And they need to keep making improvement every single day. I mean, everybody watched yesterday, it wasn’t good enough in any area on offense yesterday for sure.”

Taylor’s father-in-law and former Packers coach Mike Sherman was at practice Thursday with Taylor’s son, Brooks. The two dipped out of a family vacation to swing by practice on their way to Canton, Ohio, for this week’s Pro Football Hall of Fame inductions.

Class of 2022 inductee LeRoy Butler, who played his final two seasons for Sherman, invited his former coach to the ceremony. Taylor said this will be his son’s first visit to Canton and the Hall of Fame.

“Yeah, he’s pumped,” Taylor said. “I don’t think he understands the magnitude of what this is. I’ve tried to explain it to him; he’s 11. He’s more concerned with catching kickoffs from Evan McPherson yesterday (while wearing the McPherson jersey he got for Christmas). I tried to prep him to understand this is a big moment for these guys. This is one of the greatest things that’s ever happened to them, so when they’re giving the speeches try to find a way in your 11-year-old brain to appreciate it. He just keeps asking, ‘Are the kids going to be there?’ I’m like, ‘I can’t answer that buddy.’ I look forward to hearing how it goes for them.”

In addition to Sample, right tackle La’el Collins (back) continued to sit out, along with the three players who remain on the physically unable to perform list — defensive end Khalid Kareem (undisclosed), linebacker Joe Bachie (knee) and safety Brandon Wilson (knee).

Backup offensive lineman D’Ante Smith left practice early on a cart. He appeared to be favoring his right ankle/leg.

D’Ante Smith limps to the cart and heads in. Looked to be favoring right ankle/leg pic.twitter.com/PAF2YoSaK0

• Sam Hubbard and Josh Tupou each had sacks.

• Undrafted rookie receivers Kwamie Lassiter and Pryor each caught numerous passes on the day, although Lassiter did let one go off his hands.