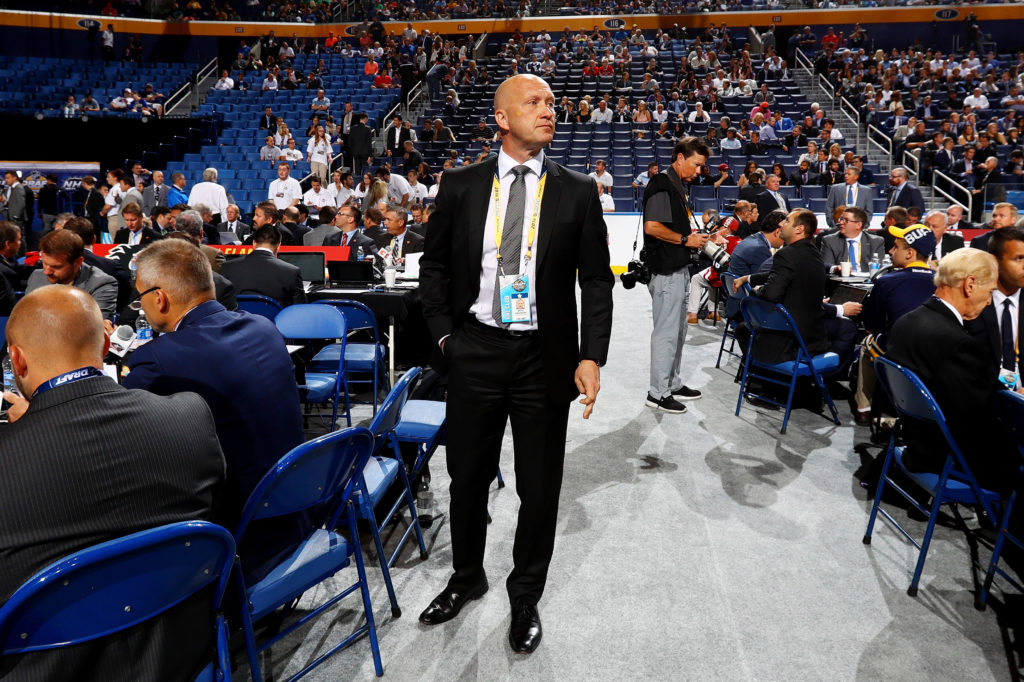 MONTREAL — Jarmo Kekäläinen sat alone on one side of a long table on Wednesday morning while six reporters and media types filled the chairs across from him. It looked as if the Blue Jackets’ general manager was sitting for a deposition.

When a reporter jokingly asked Kekäläinen if he “promised to tell the truth, the whole truth, and nothing but the truth,” the 56-year-old Finn played along. Is an NHL GM spilling the beans on the eve of the NHL draft?

“I’d better leave before I answer any questions then,” Kekäläinen said with a smile.

Kekäläinen isn’t quite the most powerful man in Montreal this weekend, but he wields considerable influence. Not only do the Blue Jackets have the No. 6 and No. 12 overall picks in tonight’s first round, and not only do they possess a serious drive to make the roster more formidable, but they have one of the rarest commodities in today’s NHL: salary cap space.

There are plenty of NHL teams with big plans this weekend, but Blue Jackets executives are making it known across the league — not with public expressions, but through down-low conversations — that they are willing to be aggressive.

Kekäläinen said he planned to spend part of Wednesday evening and Thursday morning collecting official trade offers for each of his first-round picks. He will not trade both of them, he said, unless he’s presented with an offer that is truly staggering.

But he would consider trading one or the other, and he’s indicated for more than a week now that there is enormous interest in each pick.

“We’ve got a lot of offers for those picks and we’re looking at them, weighing their value to us and the future and all those things,” Kekäläinen said. “Might take until we get to (pick number) five to decide on six and may take to 11 to decide on 12.”

Montreal is doing a proper job as host, refusing to reveal the No. 1 selection. Most assume it will be either center Shane Wright or winger Juraj Slafkovsky, with the New Jersey taking the other player at No. 2.

Centers Logan Cooley and Cutter Gauthier, and defensemen Simon Nemec and David Jiricek are expected to round out the top six picks, but this is a highly unpredictable draft. It may not be loaded with franchise difference-makers, but scouts believe it’s chock full of very good players.

The Blue Jackets will have worked through scores of scenarios by the time the draft starts.

“If there’s a young player available that we like more than what the sixth pick would give us, we’d know after the fifth pick exactly who we would take,” Kekäläinen said, “and I think there would be a deal in place beforehand so that when the fifth pick is gone, we know who we’re taking at six.

“But at the same time, we could also decide the other way, where we say the guy we’re getting at six is better than the opportunity we have through trade.”

Kekäläinen has spent two decades in the NHL, including the last nine-plus seasons in Columbus. As a former NHL scout, he’s had his hands in 20-plus drafts, dating back to the late 1990s with the Ottawa Senators.

This year’s draft isn’t unique, he said. There have been other years like this, most recently the 2017 draft. But it is an interesting draft in that there’s so little consensus on the top five, much less the top 10.

“You can look at the mock drafts from the experts and see that they’re all over the place, even at the top,” Kekäläinen said. “There could be guys that we don’t have in our first round go in the top 10, or it could go exactly the way we have our list and we could be taking our 12th player and No. 12.

“But I doubt it’ll go that way. I think it’ll go the other way where there’s gonna be some ooohs and aaaahs, some surprises in the top 10.”

Kekäläinen wants the Blue Jackets to compete for a playoff spot next season, but he’s not going to get reckless, either. Suppose the Blue Jackets trade either of their first-round picks. In that case, it will be for a player with significant term remaining on his contract or a player who still has multiple years before attaining unrestricted free agency.

“We’re not gonna trade a pick for a guy that we could potentially control for two years, and then once our window starts opening, when we would be really ready to compete for a Stanley Cup, all of a sudden we don’t have that guy anymore,” Kekäläinen said. “That doesn’t make any sense.

“We’re gonna only do it for a young player that’s gonna be with us for a long time. Somebody that we can build with our core, grow with our core, and also fills a need. Immediate help is not the biggest focus. It’s immediate and into the future, rather than just immediate.”

The Blue Jackets will have a list of about 100 players on their master list, Kekäläinen said. It feels like he’s ready for a hundred or so scenarios to play out, too.

Barbara Kruger: ‘Anyone who is shocked by what is happening has not been paying attention’