TORONTO — Matt Chapman was nearing third base after launching a two-run home run to left field. Before he rounded the corner, he looked back at the Blue Jays’ bullpen and pointed toward the relievers. With that simple acknowledgement, the relievers started jumping up and down, rooting on the third baseman like a bunch of kids who had just eaten way too much candy.

So, what’s the backstory here? Why the exaggerated celebration from the relievers?

Typically, when a Blue Jays player hits a home run, they point to the bullpen while running the bases as a nod to the relievers. George Springer does it. Vladimir Guerrero Jr. does it. They all do it. Well, except Chapman.

“I just hit a home run sometimes and I forget,” Chapman said, half-chuckling. “I’m more concerned about touching all the bases.”

The Blue Jays bullpen living for Matt Chapman HR’s in one of the best developments this season. 😂 pic.twitter.com/hhJA9KzDrr

Fair enough — touching the bases is important. But that excuse didn’t stop the relievers from some friendly teasing of their slugging third baseman, who has a team-leading 16 home runs at the Rogers Centre, many of which have landed right in that same left-field bullpen.

“For a long time, the bullpen has really been asking me to acknowledge them when I hit a home run,” Chapman said. “And for the first like, 15 home runs, probably, I did not acknowledge them one time and they’re giving me a really hard time.”

That included some chirping in the clubhouse, according to side-slinging reliever Adam Cimber, and once or twice in-game the relievers used the bullpen phone to call down to the dugout and voice their disappointment with Chapman.

“We phoned the dugout and said, ‘Hey, tell Chappy, he’s dead to us,’” Cimber said while smirking.

Finally, during last week’s series in Boston, Chapman hit a home run and pointed to the bullpen. The relievers loved it. Since then, Chapman has hit four more home runs, including the one in Sunday’s 4-1 win over the Detroit Tigers in which José Berríos pitched seven one-run innings. The bullpen pitched two scoreless innings behind Berríos, and along with that effort, they were naturally taking some credit for Chapman’s hot bat that powered the Blue Jays to a three-games-to-one series win over Detroit. 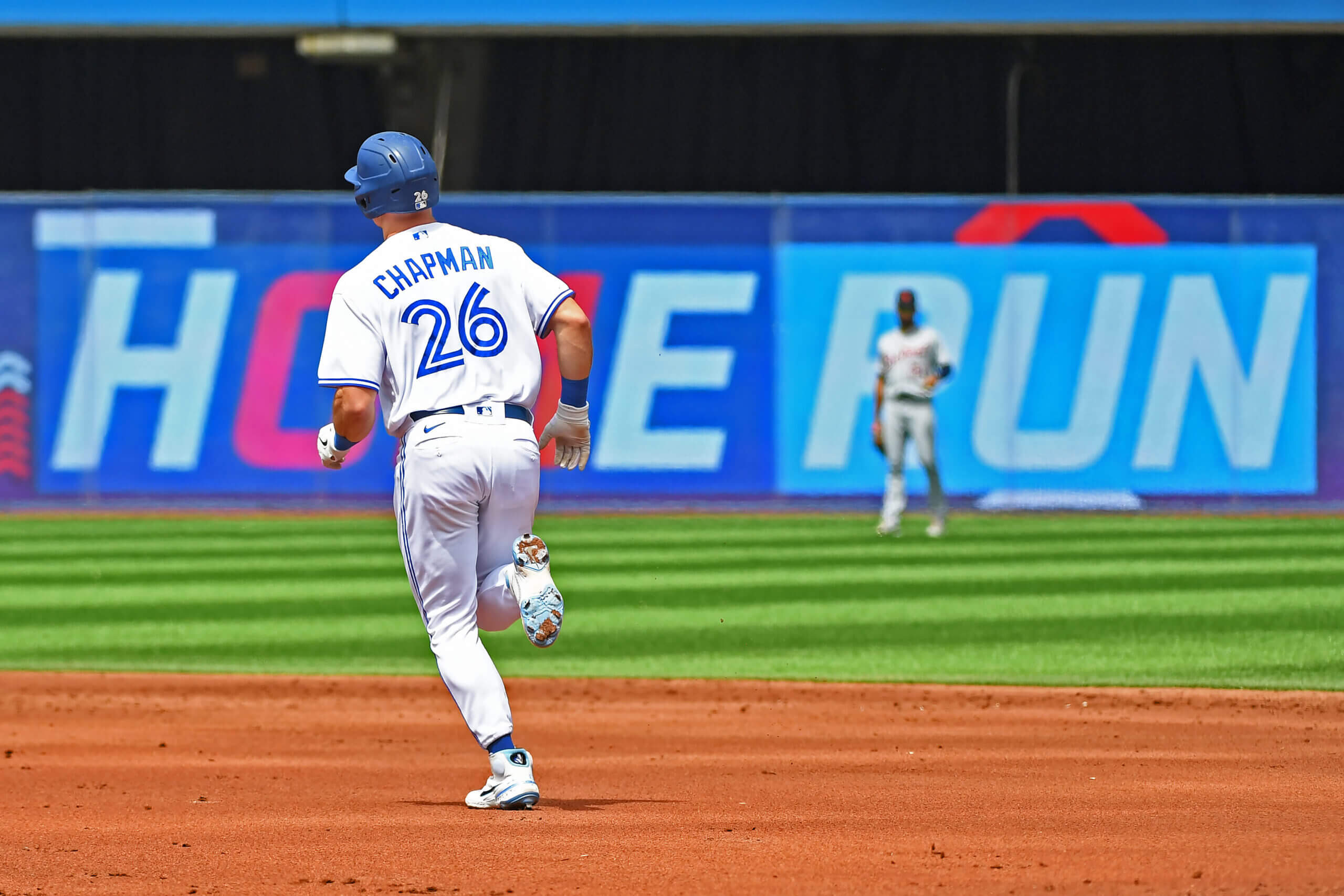 It capped off a torrid stretch for Chapman in July. After a slow start to the season in which many of his hard-hit balls didn’t fall for hits, he adjusted to use his legs more in his swing. He drove in 22 runs this month, the most by a Blue Jay in July since Josh Donaldson’s 24 RBIs in 2015

“I finally acknowledged them a few days ago, and they loved it and then I started hitting a few more homers and they’re like, ‘See what happens when you start acknowledging the bullpen,’” Chapman said, smiling. “I think we got a good thing going now. Me and the bullpen have been having a pretty good back and forth lately.”

Added Cimber: “The baseball gods are rewarding him for making it right.”

Still, Chapman has to remind himself to do it. The bullpen, meanwhile, sits on pins and needles waiting to see if he’ll look at them between second and third base.

“I’ll get better at it,” the third baseman said.

“It’s a big deal now when we get love from him,” Cimber said.

This sort of good-natured ribbing is common in baseball, a sport that often demands an even-keel attitude lest players get swallowed up by the grind of the 162-game schedule. When a team is as hot as the Blue Jays, winning 12 of their last 15 games, friendly banter can act as a form of team bonding.

And, following Sunday’s win, the team bonding was set to continue with the Blue Jays holding a beach-themed party Sunday night in Tampa, Fla., ahead of their off-day Monday.

In the clubhouse after the game, players and the coaching staff were dressing in their beach attire before their flight to Tampa. Guys were wearing swim trunks, tank tops and Hawaiian shirts. Ross Stripling had a giant shark-themed floating device as part of his get-up. The idea came from Berríos, who will host the party with George Springer, who is his neighbour in the Sunshine State. They plan for the party to spill over into both of their backyards.

“He said since we’re going to the beach, wear beachwear and be comfortable,” Chapman said. “Everybody’s going to dress up and wear beachwear. Luckily, that’s like most of my clothes, so I didn’t have to go shopping.

“I’m really excited to see what everybody brought out. I thought we were just like wearing trunks and a beach shirt or something, but everybody’s taking this to the next level, so I might be getting put to shame.”

Said Berríos: “We’re going to have fun tonight. … Off the field, we are human, so we’re going to hang out together, all the teammates, and just try to get relaxed, enjoy the off-day tomorrow and then get ready for the next series against Tampa.”

The end of this month has looked a lot different than the start, when the Blue Jays went on a 1-6 West Coast road trip that led to the dismissal of former manager Charlie Montoyo. The club has turned things around since then, going 12-3 to finish July with a winning record and firmly in the top American League wild-card spot.

The Blue Jays (57-45) have been playing their best version of baseball, with every facet of the roster clicking at once. It’s the sort of sustained winning run that should lead the front office to augment the roster before Tuesday’s trade deadline, with pitching remaining the focus.

The players will wait to see if anyone new walks in the door between now and Wednesday. For now, though, things are in harmony, including the bullpen and Chapman.

“I don’t know what really righted this ship, but I think that we’ve got a good thing going right now, and we got two months left of baseball and a little bit of October, hopefully more,” Chapman said. “But for the regular season, I think there are 60-some-odd games left and for us to be playing this good of baseball right now is huge, because it doesn’t get any easier and everybody’s trying to load up at this time and wants to win.

“(The) playoffs, it’s an open race for the most part right now, so I like where we’re going and I think we finished July strong and we got to carry it into August.”