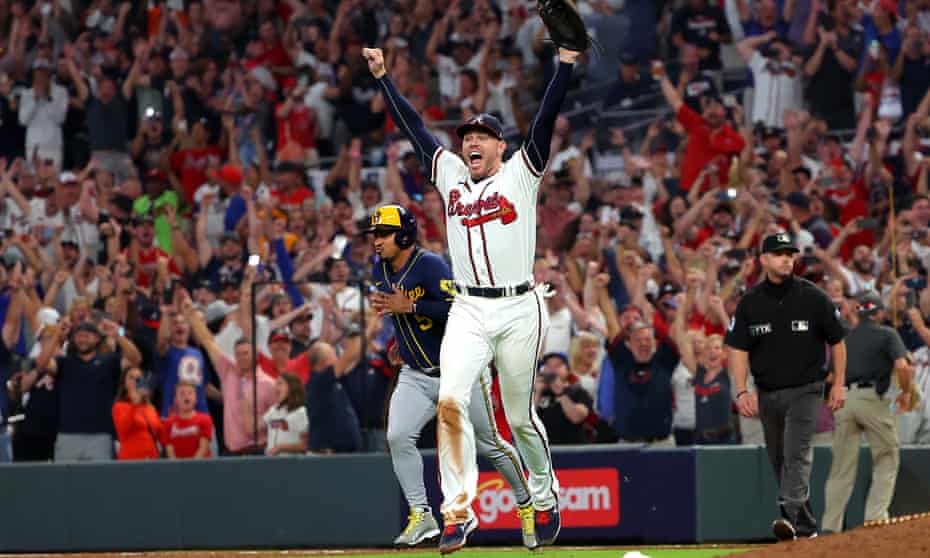 Freddie Freeman hammered a tiebreaking homer with two outs in the eighth inning to propel the Atlanta Braves to a clinching 5-4 victory over the visiting Milwaukee Brewers in Game 4 of the National League Division Series on Tuesday.

Freeman’s 428ft blast to left-center off a slider from Brewers left-hander Josh Hader helped the Braves win the series 3-1 and reach the NL Championship Series for the second straight season. Atlanta lost to the Los Angeles Dodgers in seven games in 2020.

He later added, “I’ve had a lot of cool moments in my career. I think it’s going to top them right here, but hopefully that’s not the last cool one and I have a couple more in these playoffs.”

The Braves will face the winner of the Los Angeles Dodgers-San Francisco Giants series. Mookie Betts and Will Smith hit home runs, Walker Buehler pitched into the fifth inning on short rest, and the Dodgers forced a deciding fifth game of the teams’ National League Division Series with a 7-2 victory over the visiting Giants on Tuesday.

The first-ever playoff series between the longtime rivals, both 100-plus-game winners this season, is even at two wins apiece with Game 5 set for Thursday at San Francisco.

Elsewhere on Tuesday, Jose Altuve slugged a three-run homer, Carlos Correa, Alex Bregman and Michael Brantley each drove in two runs, and the Houston Astros booked a spot in the American League Championship Series for the fifth straight season with a 10-1 trouncing of the host Chicago White Sox in Game 4 of the AL Division Series.

Correa delivered a two-run double in the third inning that put the Astros ahead to stay. Bregman ripped a two-run double one inning later as Houston won the best-of-five series three games to one. Brantley contributed a pair of one-run singles.

Altuve, who went 3-for-5 and scored four runs, turned the game into a laugher with his blast off White Sox right-hander Liam Hendriks in the ninth. He is tied for fourth in postseason history with 19 homers.

The Astros will face the Boston Red Sox in the ALCS. Houston, who have advanced to two of the past four World Series, lost in five games to the Red Sox in the 2018 ALCS. Houston join the Oakland Athletics (1971-75) as the lone AL team to reach five straight championship series.

What channel is Warriors vs. Clippers on tonight? Time, TV schedule, live streaming