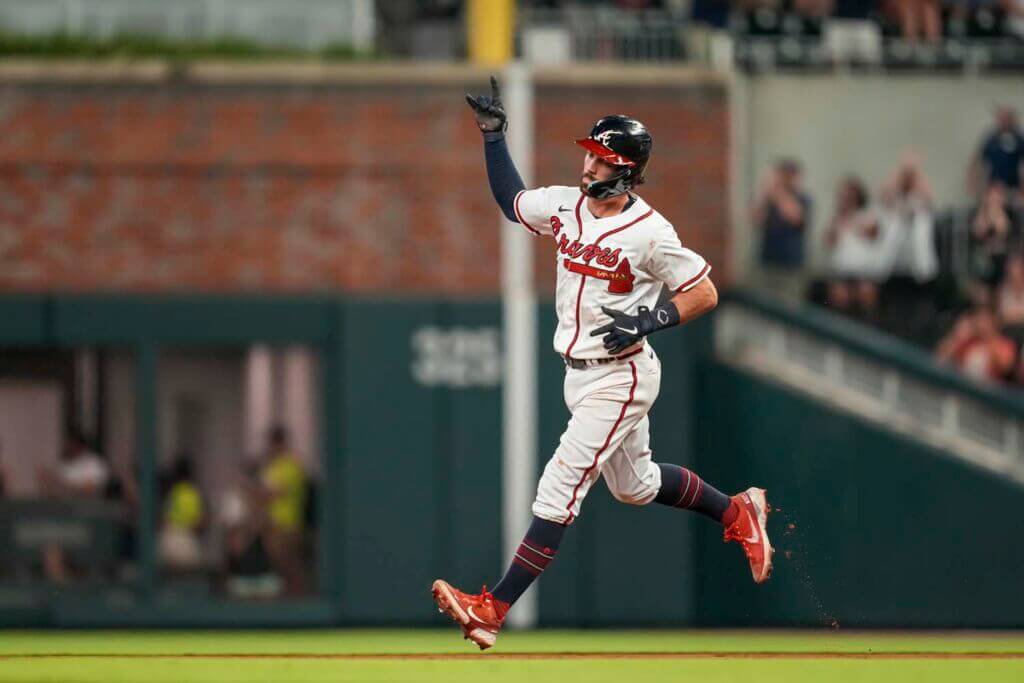 ATLANTA — The image showed up on a screen and Dansby Swanson felt revulsion curdle in his gut on sight.

The Braves’ shortstop had just toiled through a rough two weeks to start the 2022 season. Through 14 games, he had only knocked seven hits in 49 at-bats and drawn four walks. He had put up an unusually low contact rate of 63 percent, roughly 10 percentage points below what he had become accustomed to producing. And he had struck out in nearly 42 percent of his trips to the plate.

The strikeout rate was so absurd, so untenable he just wanted to bury it. But before he could sprinkle the final clumps of dirt on its grave, he looked some pictures of himself at the plate. On one end of a side-by-side depiction, his swing and all of its elements — the lift of his front leg, the foot strike of his back leg, the cut of his bat through the strike zone — were perfectly synced with the pitcher’s release. On the other side, the swing was noticeably late getting going.

It’s not uncommon for a hitter’s timing to get out of whack. But for 14 consecutive games, Swanson was the strikeout king of the National League. And for someone whose career viability was staked more so on being well-rounded than as a three-true-outcomes hitter, the swing-and-miss was alarming.

That’s putting it mildly, though. Swanson’s reaction to the images of his swings — one from his torrid stretches in July and August last year and one from early this season — was much more visceral.

In the two months since a member of the front office stitched those images together for him, Swanson has done nothing but pummel that nausea down. And in the Braves’ back-to-back defeats of the Giants at Truist Park, starting with a walk-off 4-3 victory Wednesday night and followed by Thursday’s 7-6 win, the strides Swanson has made have been even starker.

Swanson drilled the second pitch he saw on Thursday afternoon from Giants left-hander Alex Wood 436 feet over the fence in left-center field for a leadoff homer, the first of his career. Two plate appearances later, he parked a pitch from Giants reliever Zack Littell in a similar spot in left-center field. The two blasts, which came off the bat at 106.7 mph and 101.9 mph, gave him three homers in four trips to the plate. The night before, he slammed a center-cut 96 mph heater from Giants reliever Jake McGee almost to straight-away center field. And he did that after it falling into an 0-and-2 count to start what became a seven-pitch at-bat.

The power binge is impressive. It has put Swanson on track to hit 27 homers by the end of the season, matching the career-high he set last year. But given how Swanson has been seeing the ball since late April, it almost seemed like a matter of time.

Swanson has put the pedal down in the last month. His 47 hits since May 23 rank first in baseball. His 14 multi-hit games in that time frame also rank first, tied with Minnesota’s Luis Arraez. After his 3-for-4 performance Thursday, Swanson was batting .385 in his last 30 games, the first time in his career he has carried an average of at least .375 that long.

But Swanson’s surge dates back further. He cited April 21, a day off between the Braves’ final game against the Dodgers in Los Angeles and the beginning of a nine-game homestand. That’s when he looked at his swing, drilled down on his timing and pledged to put the start of the season behind him.

“It’s paid big dividends for me,” Swanson told The Athletic on Wednesday night. “Just really found some consistency and really trusted in some work that I’d done in the offseason that I felt was going to get me to a good place. But I just kind of took some time, just staying the course, with some of those adjustments that I’ve made.”

Swanson, of course, had felt the disruption with his mechanics before he sat himself down in April. But the Braves started the season with a marathon of 14 games in 14 days, seven of them on the west coast. Between the mad dash to Opening Day, a weeklong celebration of the 2021 World Series championship at home and a gauntlet of road series against the Padres and Dodgers, it had been hard to find time to take a breath.

When he did, he quickly boiled down the issue to his load at the plate. He would prepare to swing so late that he struggled to see pitches well.

“The pitches (I got) to hit I would foul off or swing and miss,” he said. “And the bad pitches, I would swing at because I didn’t have time.”

Hitting coach Kevin Seitzer saw it that way, too.

“You just see the ball bigger,” Seitzer said. “Everything slows down. Stuff’s not as explosive out of the hand as it is when you’re struggling.”

The numbers bear out the assessment. Through April 20, Swanson swung at just 65 percent of pitches in the zone and 42 percent of pitches overall. Not because he was being overly cautious, but because his recognition of pitches was a tick off. That led to an overall contact rate of 63 percent. All his plate discipline marks were lower than those from 2021, when he produced a 48 percent swing rate, 74 percent swing rate in the zone and a 72 percent contact rate.

After making a mental adjustment to improve his timing, he saw an uptick across the board. From April 22 through Wednesday night, Swanson swung at 75 percent of pitches he saw in the zone, improved his zone contact rate to 81 percent (up slightly from 75 percent) and overall contact rate to 71, and nearly halved his strikeout rate. It was 24 percent in that time frame.

“It’s been night and day from where he started to where he is now,” Seitzer said. “It’s the timing on the fastball, the recognition of the secondary stuff, the takes on the strike-to-ball pitches. Those are the big things that jump out. When guys are on time for the heater and they’re laying off strike-to-ball breaking balls, they’re in a really good spot. And that’s what we’ve been seeing from him for quite a while now.”

Seitzer didn’t want to understate the nature of the season, though. There is always a chance Swanson falls into a lull, as he has done at different stages of his career in Atlanta. But Seitzer admits there is something a little different about Swanson, 28, in his seventh big-league season.

“To be able to stay hot as long as he’s been able to stay hot is — holy cow,” Seitzer said. “Because it usually doesn’t go that way. He’s just improved so much. And as hitters get more time, more experience in the game, there’s less panic, there’s less pressure they put on themselves. They all put pressure on themselves to be the best they can be. But as far as being able to keep it in the right perspective, he’s really, really matured over the years. … He’s a very strong mental and emotional player. He’s very strong and very disciplined. That may be the best compliment I can give Dans. He’s very, very tough mentally.”

Braves manager Brian Snitker agreed with Seitzer, calling Swanson “the strongest mental player I think I’ve ever been around.” And he believes there’s only more room for Swanson, who placed second among NL shortstops in Tuesday’s update on All-Star voting, to grow.

“It’s kind of what you envisioned him doing when he came at a young age and just thinking that when this guy gets established, he can run that infield,” Snitker said. “He is thinking, he sees the game, he understands it, he’s reading swings. He knows our pitchers. Now that he’s been int he league so long, he knows the opposition really well. It’s really good to have that guy in the middle of the diamond with those attributes.”

Bruins coaching search: 6 prospects who could benefit from a new voice