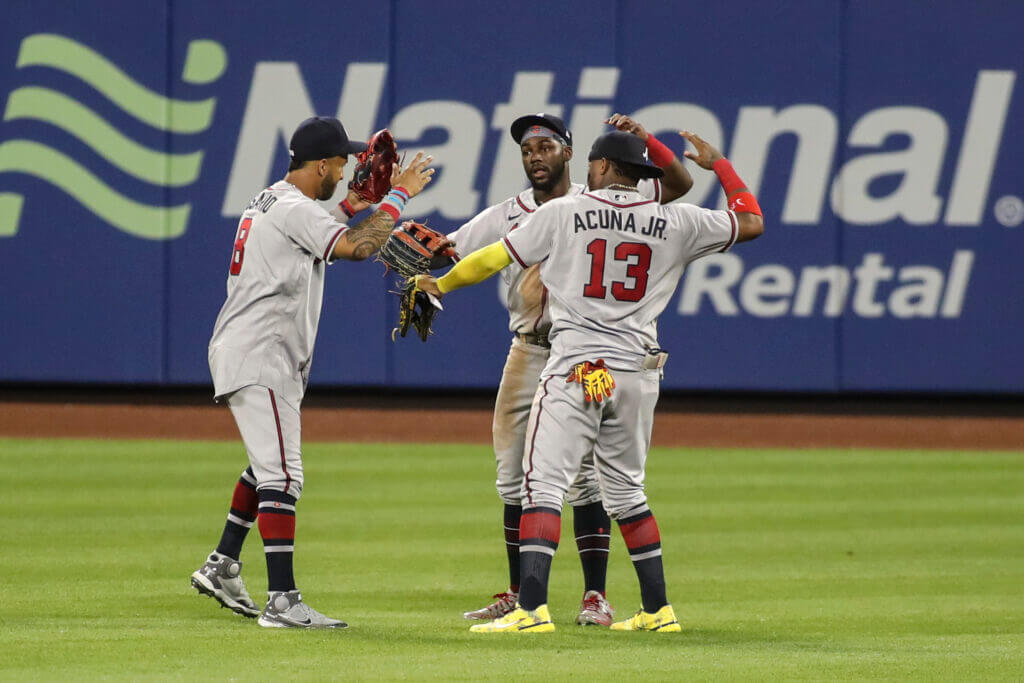 NEW YORK — One night after saying he sometimes didn’t have confidence in his surgically repaired right knee when hitting, Ronald Acuña Jr. showed plenty of faith in the knee Friday with four hits and a terrific leaping catch at the right-field wall to rob Pete Alonso of a potential two-run homer.

Acuña and the other Braves outfielders, including rookie sensation Michael Harris II in center and resurgent Eddie Rosario in left, showed why, as Acuña put it, “I think we have the potential to have one of the best outfields in the league.”

The three outfielders had eight of the Braves’ 14 hits, including a home run apiece for Rosario and Harris during an eight-run outburst in the first two innings that fueled a 9-6 win against the Mets before 40,305 at Citi Field, a raucous crowd that included plenty of hecklers in the outfield corners.

Acuña was asked if he had done like Rosario and pointed to his ring finger, signifying the 2021 World Series championship ring.

“I did it one time,” Acuña said, laughing.

It was that kind of night, a wild one that lasted more than 3 1/2 hours and saw the Braves stake Ian Anderson to an 8-0 lead after two innings and knock the Mets’ usually reliable Taijuan Walker out of the game after recording just three outs.

“It was all night,” Acuña said through a translator, about the heckling. “But I like that. I like that, just because it kind of gives me that motivation to play extra hard. … I think tonight’s game felt like a playoff game. Looking forward to (Saturday’s doubleheader), hope we win both games.”

Anderson had another bad night, failing to make it out of the fifth inning and being charged with seven hits, four runs and four walks. But the Braves were so strong with the bats and gloves Friday, it didn’t matter.

Walker allowed four runs and three extra-base hits in the first inning — doubles by Dansby Swanson and Matt Olson, a three-run homer by Rosario — and faced four batters without recording an out in the second inning, with No. 9 hitter Harris leading off that inning with his 10th home run. Rosario has hit .333 with 11 RBIs in his past nine games.

Acuña ended the Mets’ first inning by stunning the crowd and Alonso, leaping to get his glove higher than the right-field wall, and Harris ended the second inning with a spectacular throw to the plate to quash a Mets rally.

Anderson had given up a two-out single followed by consecutive walks and a run-scoring single to Brandon Nimmo, but Harris rifled a one-bounce throw to the plate to cut down Luis Guillorme trying to score a second run on the play. Second inning over.

“That inning was fixing to get away from us, and to get that out at the plate on that play right there by Michael was huge in that game,” said Braves manager Brian Snitker, who was later asked about the composure of Harris, the youngest player in the majors. “It’s been unbelievable. For a kid that has the limited professional experience that he has to come in here, and how he’s handled himself, has been really, really good. He’s been a big reason why we got on that run (beginning June 1).”

Acuña said of Harris: “To be honest, that kid’s everything. And he can do everything.”

So can Acuña, of course, when he’s on his game. Minutes after his first-inning catch, Acuña followed Harris’ homer in the second inning by hitting a single and stealing second base, his 23rd in 30 attempts. In the third inning, Acuña singled to left field and alertly hustled to second base when Tyler Naquin tried to throw out Orlando Arcia at third.

And when Alonso hit another sharp liner to right field in the third inning, Acuña was there again, leaping to catch the ball high over his head.

The hits, the catches, the steal — all were encouraging signs, especially after Acuña broke an 18-game home run drought Thursday but raised some eyebrows with his postgame candor about his knee.

Acuña hadn’t said anything Thursday that surprised Snitker, but plenty of fans expressed concern since it was the first time since Acuña returned April 28 from nine months of rehab that he acknowledged the knee didn’t feel normal all the time.

That’s typical for athletes in their first year after major surgery. But many Braves fans have come to view Acuña as well beyond normal, which was underscored by his .320 average, 12 extra-base hits (five homers), 10 stolen bases and .945 OPS in his first 27 games after being activated from the injured list.

Then came an extended slump, and he began Friday with a .256 average, nine homers and a .750 OPS. The OPS was nearly 150 points below his .899 career OPS and 240 points off the career-high .990 he had last season before tearing his right ACL two days before the All-Star break and having season-ending surgery.

“It’s all part of the process, and we keep moving forward.”

What Acuña also said in that interview, which wasn’t translated (but was later by another Spanish speaker), was that he could rotate properly on some swings, but at other times he could not.

Snitker heard what Acuña said after Thursday’s game, about not having full confidence in the knee on some swings, and the manager was ready when asked about it before Friday’s game.

“I can see it,” Snitker said. “He had major surgery, and it’s a big deal coming back. I know you get to the year mark (from Acuña’s July 2021 surgery) and he gets cleared and everything, but you’ve got to fight through the mental part of that whole thing, too, and the different moves that you make. And waking up and it’s good enough to go, but it doesn’t feel great. And things like that.

“He’s going through a lot. A young guy in any sport (does), and Ronald’s no different. There’s mental hurdles. I think he’s doing a great job of doing that, and he’s posting every day and things like that.

“I’m sure there’s going to be days where it’s not feeling great. He’ll get through it. He’s done it this far, he can continue to do so and be fine. But that’s just kind of the human element in dealing with that also.”

His run-support stats grew again after the Braves scored eight runs in the first two innings, but Anderson didn’t get a decision because he was replaced with two outs in the fifth. Starters need to go five innings to get a decision, and he’s lasted four innings or fewer in four of his past eight starts.

Anderson’s 5.11 ERA would be the fourth highest among MLB starters if he had four more innings to qualify for rankings. Pitchers must have one inning per team game to qualify, and he’s pitched 103 2/3 innings in 21 starts in the Braves’ 107 games, averaging just under five innings per start.

“He got into some bad counts and the command wasn’t great,” Snitker said. “He ate up a lot of pitches in a short period of time was the biggest thing. We’re gonna keep working at getting him ready for the next one.”

Before Friday, the Braves scored 4.3 runs in Anderson’s starts while he was in games, a full run higher than the next-best offensive support for any Braves starter, and more than double the 2.1 runs they’ve averaged while Spencer Strider is in games he starts.

Tim Dowling: I try to ignore the pile in the corner ... until I realise it has a face