Danny Welbeck has rarely felt fitter, or better, as he approaches his 15th season in the Premier League.

“This is my first full pre-season in a few years. I’m really happy with that, no injuries, no little niggles. I’ve trained every session and I’m feeling good, strong and fit.

“I can’t wait for the season to start now. I’m really looking forward to it.”

Speaking to The Athletic in the media suite at the club’s training complex in Lancing, Welbeck exudes rude health and contentment.

At the age of 31, he’s still doing what he’s done over the course of half of the Premier League’s lifetime — posing problems to defenders with a blend of running power, muscular athleticism and aerial menace.

It has, he confides, gradually become harder over the years, because teams are more sophisticated in the way they defend as a unit.

“The way the teams set up, around the structure of organisation and defending as a team, that makes it more difficult for forwards,” Welbeck explains.

“It’s difficult to say whether defenders are better now or were back then, but it definitely has changed, more as a team defensively.

“The teams you are coming up against are all very switched on, organised and know what they’ve got to do in certain positions.”

Then he adds: “But there are always weaknesses you can exploit as well. That’s when it comes down to the game plan, how you are going to set up and exploit the weaknesses of the opposition.”

Graham Potter is meticulous in the way he approaches that challenge.

Brighton’s head coach has joined a heavyweight list of managers Welbeck has played under — Sir Alex Ferguson at Manchester United, David Moyes and Louis van Gaal (both briefly) also at Old Trafford, Steve Bruce in a loan spell at Sunderland, Arsene Wenger and Unai Emery during five years at Arsenal. 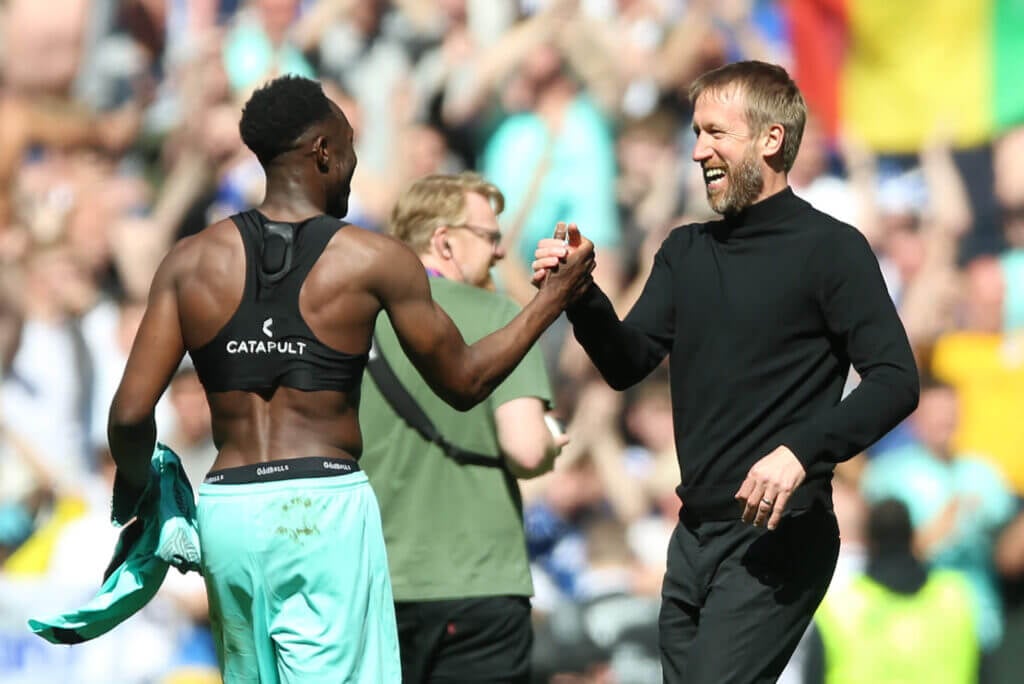 What’s it like under Potter? “First and foremost, I really enjoy playing under him — the level of detail he puts into training sessions, meetings and when we are going out onto the pitch,” says Welbeck.

“It’s very good. Of the past coaches and managers I’ve had, he reminds me of Unai Emery with the similar level of detail. No stone is left unturned.”

Brighton didn’t hesitate in triggering in June a one-year option in Welbeck’s second successive year-long deal. Having recovered from a hamstring surgery which sidelined him between late September and Boxing Day, he featured in 21 of the final 22 league matches last season.

He scored three goals in the final five games, a key contribution to the club’s highest-ever finish of ninth.

Welbeck has been Potter’s go-to leader of the front line throughout pre-season. Only skipper Lewis Dunk had more game time (265 minutes compared to 247 minutes).

His summer preparation continued during breaks in Greece and Italy, then back home in Manchester.

“It’s important to keep ticking over,” Welbeck says. “The sports scientists and medical team here always give each player a few exercises or a programme to follow. That’s sent out to you at the end of the season and they’re always here if you’re back in Brighton. There is somebody at the club, so you can come in and do some bits.

“I was away in Mykonos. One of my friends, Josh King, knows somebody out there, so I just did a few sessions.

“I went with the family to Sardinia and you’re still doing little bits and bobs. When I was back in Manchester, back in the homeland, I was doing sessions there with a one-to-one coach.” 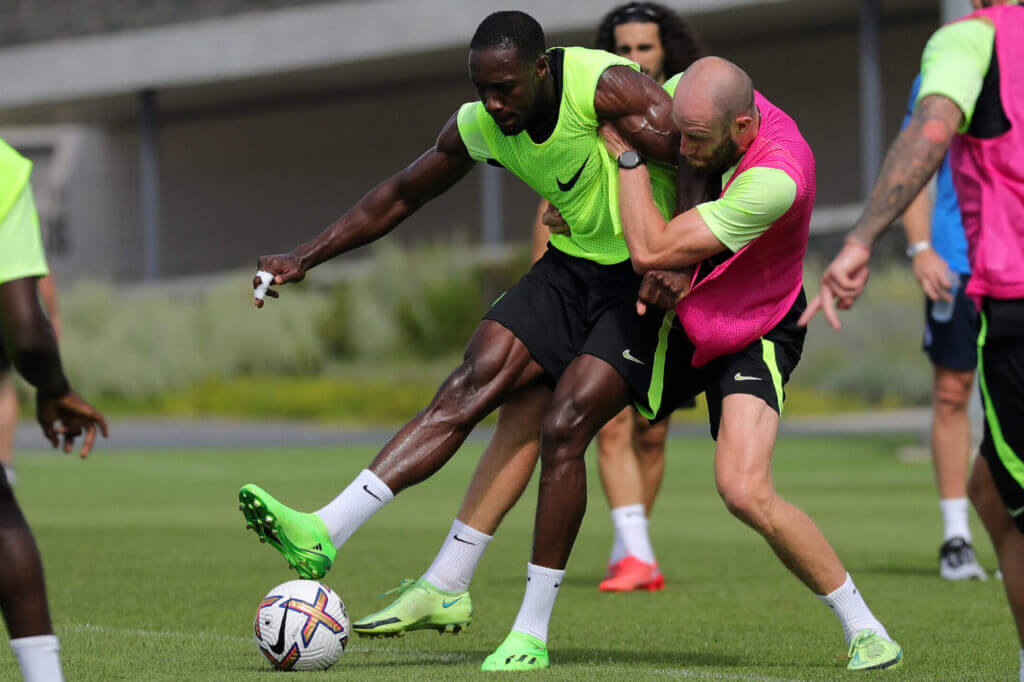 It was back in October 2020 that Welbeck arrived at Brighton on a free transfer, after parting company with Watford by mutual consent. Before making the move, he spoke to the club’s former technical director Dan Ashworth (now at Newcastle) and ex-England team-mate Adam Lallana, who helped convince him to sign in.

“I was dealing with Dan,” says Welbeck. “I’d spoken to him plenty of times while he was at the FA with England (as technical director). He was always saying a lot of good things to me about Brighton.

“I spoke to Lallana. ‘Ads’ was pretty much telling me what it was like, so I had people that I knew saying good things about the club.

“That has been the reality once I walked through the door. It’s a club full of good people, a good environment, great facilities and a club that is striving to improve.

“We wanted to get in the top ten, did that last year, now the challenge is can we go for it again, get to the same level and maybe even better.

“We know that we did well, but there were certain stages where we could have done a lot better. Knowing that as a group and coming through that and sticking together, having that experience and knowledge now can only stand us in good stead.”

There couldn’t be a more fitting venue for Welbeck’s 50th Premier League appearance for Brighton than at Old Trafford on Sunday.

He played the full 90 minutes when Ralf Rangnick’s side were humiliated 4-0 at the Amex Stadium in May. A contrasting test awaits in Erik ten Hag’s first match in charge of United. 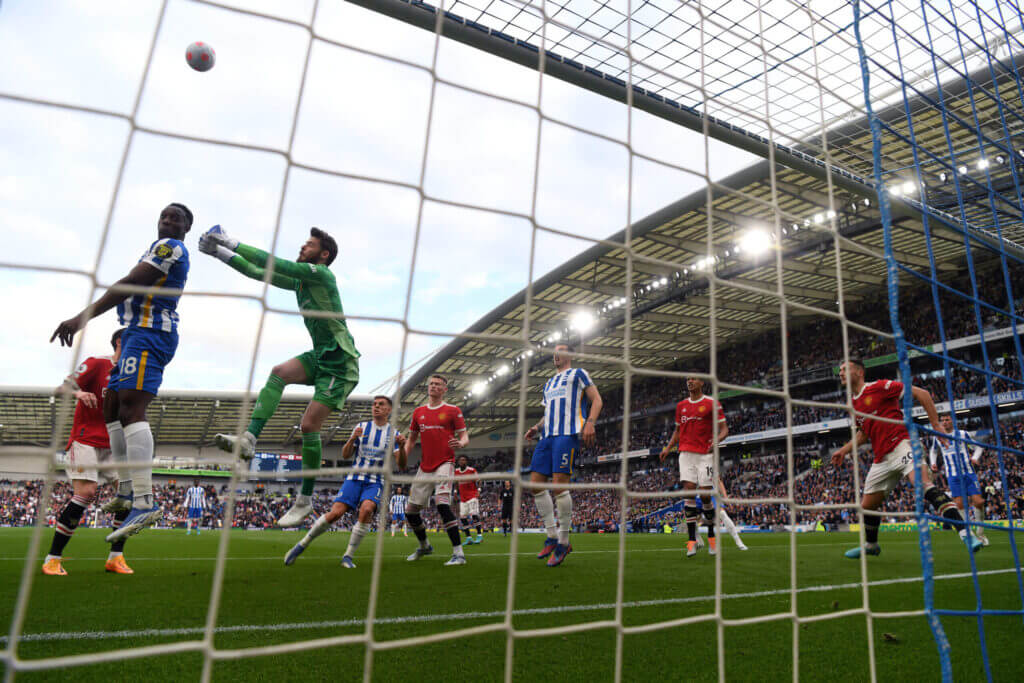 Welbeck competing for the ball with David De Gea during Brighton’s 4-0 win over Manchester United in May (Photo: Mike Hewitt/Getty Images)

“You’re dealt the cards and you just run with it,” Welbeck says. “It’s always nice to go back but now it’s not as big as it was earlier on when it was still a bit raw.

“I’ve been back numerous times now, so it’s not as strange as it used to be.

“They’ve got a new manager in and they’ll have a new system. It’s a challenge that we are going to embrace.

“They’ll have a different structure to the way they play, different responsibilities throughout the team. It’s one we’ve seen in their pre-season matches.

“It’s going to be a different challenge for us, but we’re going to be ready and I’m pretty sure we’ll be giving them a pretty tough challenge on the opening day.”

Welbeck has spent his entire career in the Premier League, apart from eight matches on loan to Preston in the Championship during his formative years at Old Trafford.

It would have been many more had it not been for injuries.

Growing pains caused knee problems as a teenager at Old Trafford. At Arsenal, he suffered two severe knee injuries and a fractured ankle which ruled him out in total for 27 months.

The inadvertent blessing is that his legs are still fresh for a player with his depth of experience. Welbeck is so single-minded about the considerable time he believes he has left playing at top level that he hasn’t contemplated whether he would drop further down the divisions or eventually go into coaching.

“I am still feeling good,” he says. “I can still breeze past players in this league. It will be a good few years before I even start thinking about that.

“I want to be on the pitch as much as possible. I  know once I’m on the pitch I can make a difference, score goals, help the team, assist.

“I still feel like I’ve got a lot left to achieve. I know the levels that I can produce and I’m looking forward to showcasing that this season.

“My main focus is still on me being the best player I can be. I’ve had a lot of setbacks with injuries, so I still feel like there’s a lot more to give.”