It is hardly a secret that Wolverhampton Wanderers need a striker.

Fabio Silva has gone to Anderlecht on loan, Raul Jimenez is on the injured list for a couple of more weeks at least, and Patrick Cutrone and Leo Bonatini remain out of the picture.

Wolves do plan to sign another front man. Even before Jimenez picked up a knee problem in the pre-season warm-up game against Besiktas two weeks ago, their intention was to add somebody in that department, most likely on a season-long loan in the hope that Silva, who only turned 20 last month, returns from his year in Belgium more ready to play at Premier League level.

But they will start the new Premier League season away to Leeds United today (Saturday) without a recognised No 9. That means they need to adapt the way they play.

The Athletic has examined their final two pre-season friendlies in Portugal last weekend for clues about how head coach Bruno Lage will try to cope without a striker.

The game plan at Elland Road is likely to include a fluid front three, a false nine, and a midfielder with additional attacking responsibility.

The basic shape of the XI is unaffected by the lack of a recognised centre-forward, though — as their setup in both Portuguese friendlies showed.

Against Sporting Lisbon last Saturday at the Estadio Algarve near Faro, the 4-3-3 formation was clear in the early stages when Lage’s side were out of possession, with Daniel Podence the most advanced of the forwards, Morgan Gibbs-White to his right, and Pedro Neto on the left. 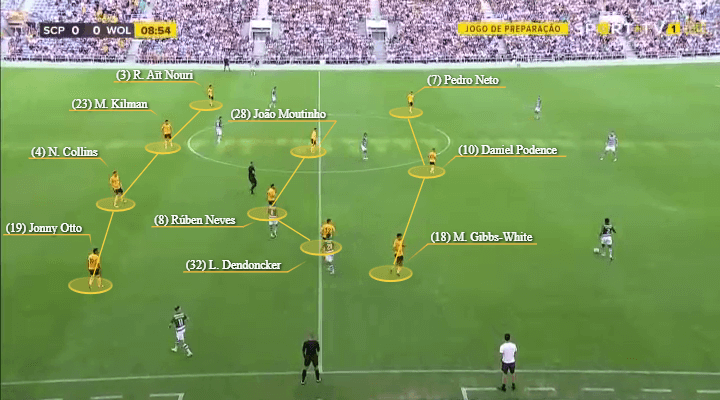 And against Farense a day later, supporters got a glimpse of the 4-2-3-1 system Lage might well have deployed to begin the Premier League season if Jimenez was fit. 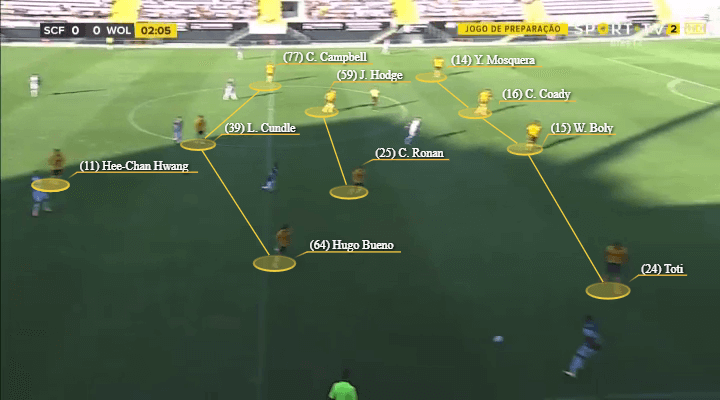 When the game against Sporting got into its flow, it was clear that Lage’s plan was much more nuanced than simply asking Podence to play out of position and crossing his fingers.

Podence was deployed as a false nine, occasionally fulfilling the roles of an orthodox centre-forward — operating with his back to goal, holding the ball up, laying it off and looking to capitalise on crosses — but more often dropping deeper to effectively operate in areas more normally associated with a No 10.

The trio of him, Gibbs-White and Neto were handed the licence to rotate and interchange their positions to make Lage’s side unpredictable in attack.

In the opening minute, fans saw the tactic in action. The three players started in conventional positions. 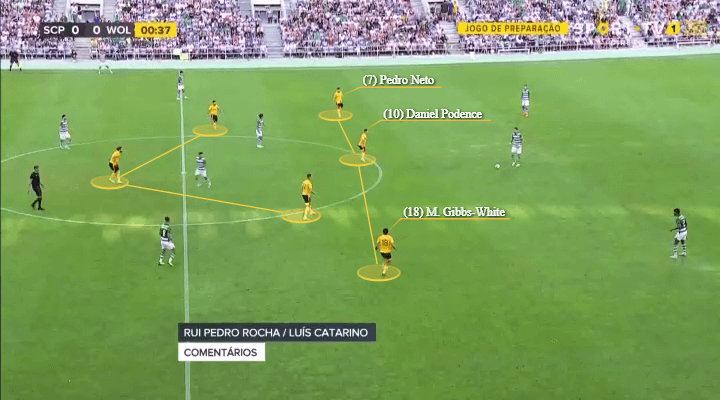 But when Ruben Neves and Leander Dendoncker combined to win possession in the centre circle, Podence moved out of the forward line immediately to become an attacking midfielder, with Gibbs-White and Neto taking up narrower positions ahead of him, effectively as a front two. 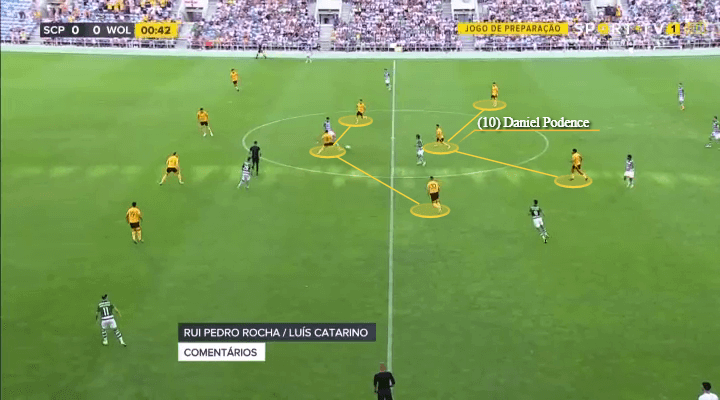 When Sporting blocked off the simple pass to Podence, Gibbs-White drifted back to offer a second passing option while Neto stayed on the shoulder of a defender to provide an option behind the opposition defence.

This was a theme of the game, with Neto often the most advanced Wolves player, albeit in a wider position. 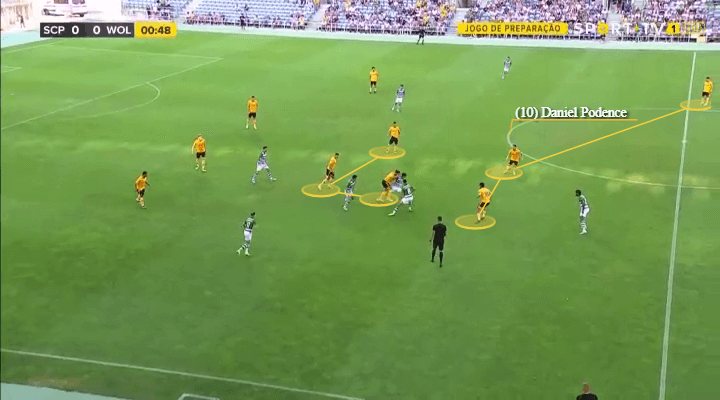 Eventually, Wolves found Podence where they had hoped to, in the space between the Sporting midfield and defence, and Neto and Gibbs-White set off on runs into attacking positions. 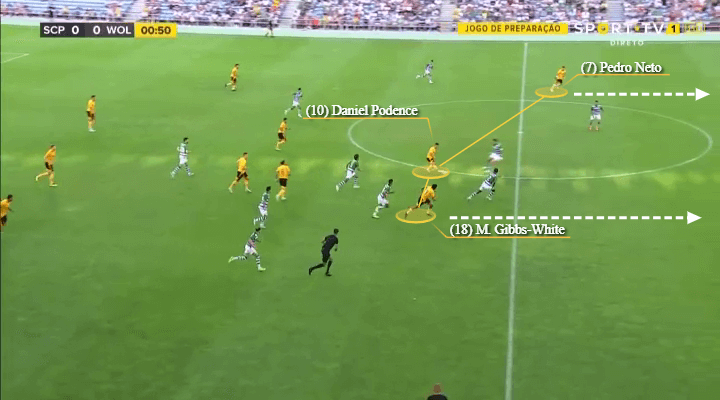 This move broke down when Gibbs-White was dispossessed, but it was a clear sign of what the front three were trying to do.

Also worth noting is the role played by Dendoncker.

He was included alongside Neves and Joao Moutinho in a three-man midfield and given a role that became clear in the sixth minute. 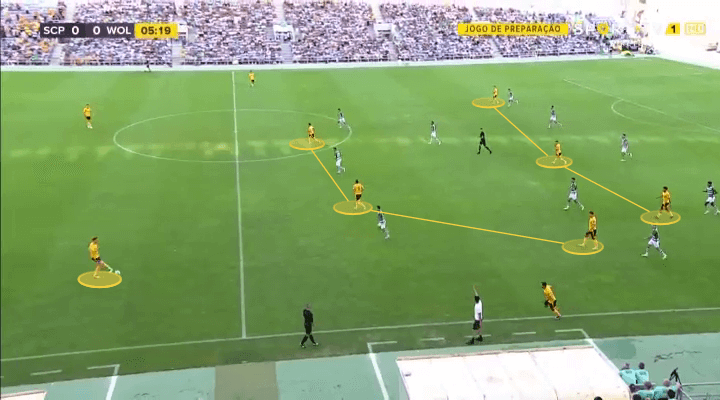 But when the ball found its way to right-back Jonny, it was Gibbs-White on the right who dropped short to receive a pass while Podence in the centre and Neto on the left looked to stretch the Sporting defence. 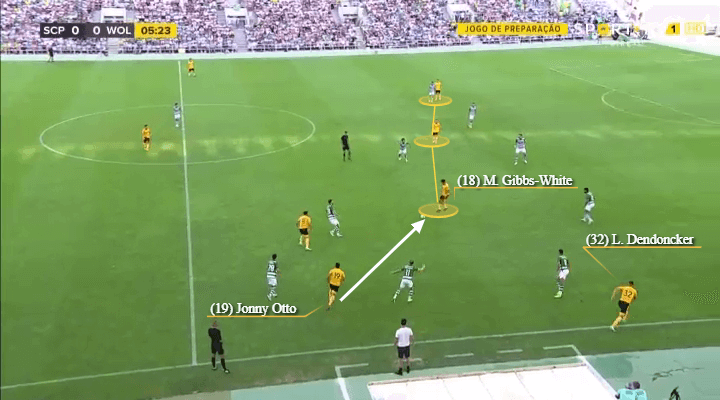 That left Wolves without a right-sided attacker, a void Lendoncker immediately filled.

By the time Gibbs-White and Podence had exchanged passes in a central area, Dendocker had effectively become a member of a front four. 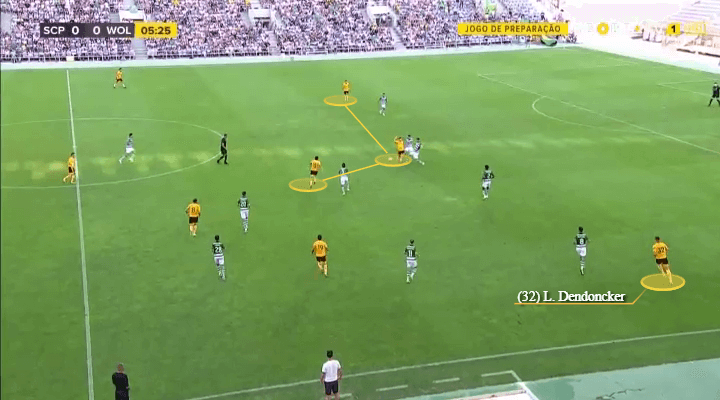 After Gibbs-White fed Neto wide on the left, the Englishman and Dendoncker burst into potential goalscoring positions, with Podence on alert for any possible pull-back. 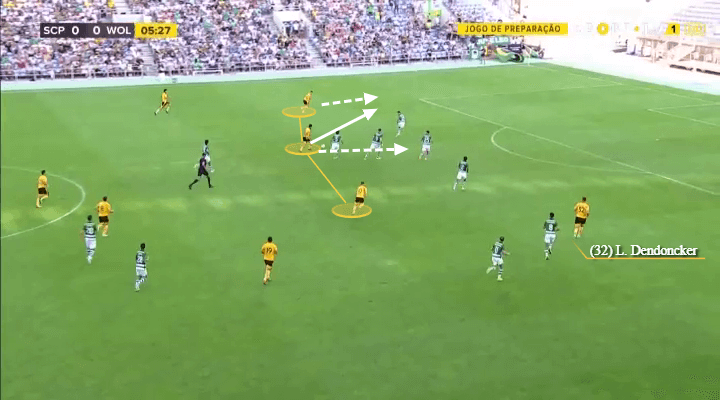 So by the time Neto crossed from the left, Dendoncker was in a genuine goalscoring position 10 yards out. 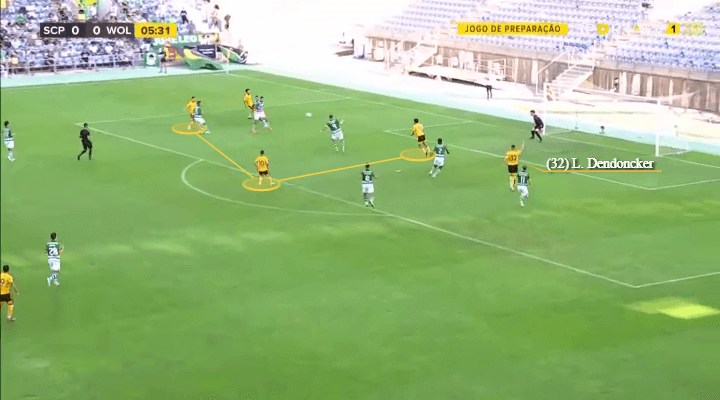 Dendoncker’s runs into the opposition box, often in advance of the front three, was a regular feature of Wolves’ attacking plan.

It was seen again in a 10th-minute move that began with Gibbs-White dropping very deep on the right to collect a pass out of defence. 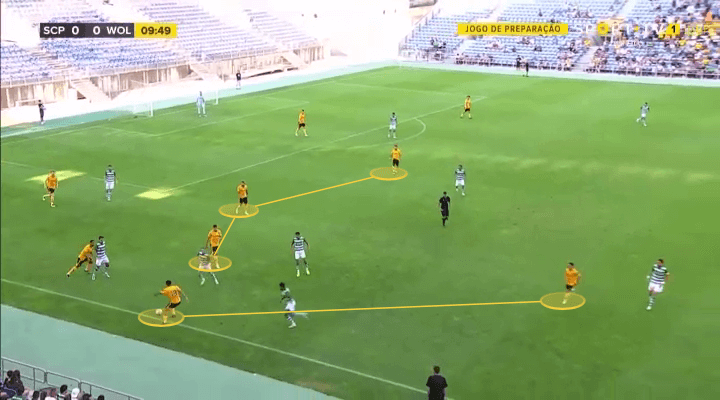 That dragged Podence across to a right-sided position. Neto in turn drifted into a central spot to ensure the front trio were close enough to link up.

When Dendoncker played a pass to Podence’s feet, there was a gap on the left of Wolves’ attack which the Belgian spotted immediately and ran into. 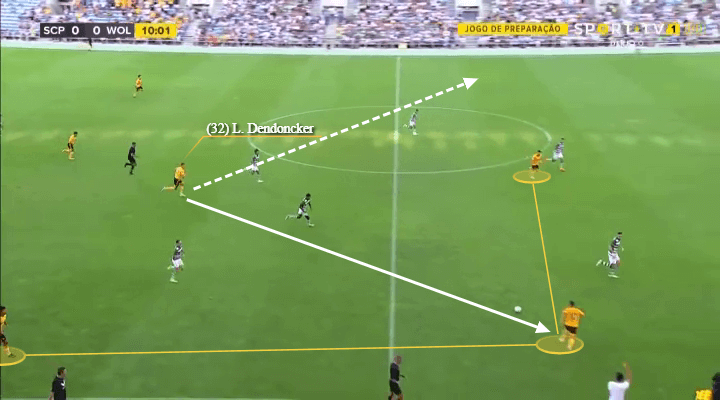 The move broke down briefly but was resurrected when Jonny threaded a pass between two defenders to send Gibbs-White running in behind the back line. 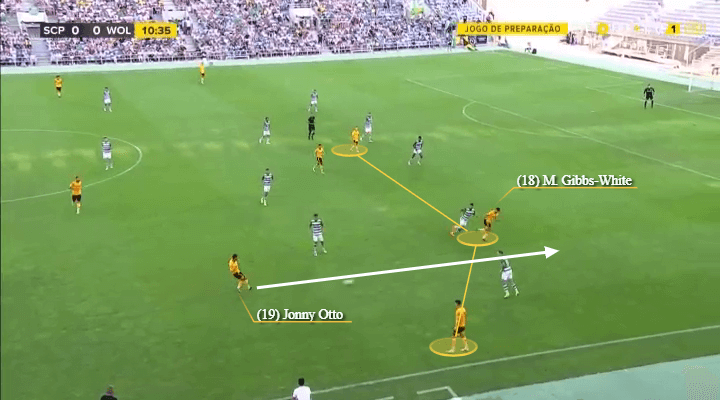 When Gibbs-White then crossed from the right, it was Dendoncker who had Wolves’ first shot of the game, drawing a save from goalkeeper Franco Israel. 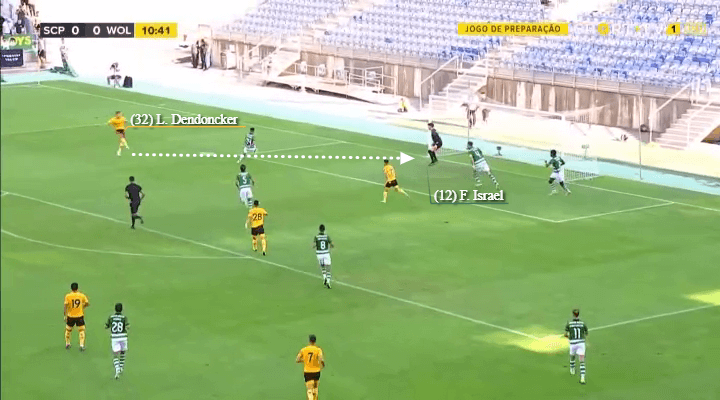 Dendoncker’s role was also evident when Wolves won a penalty which gave them the lead on 13 minutes.

With Neto and Podence both wide on the left and Gibbs-White on the opposite flank, the obvious gap in their attack was in a central position. Again, it was Dendoncker who filled it, leaving Neves and Moutinho to hold back and provide midfield insurance in the event of possession being lost. 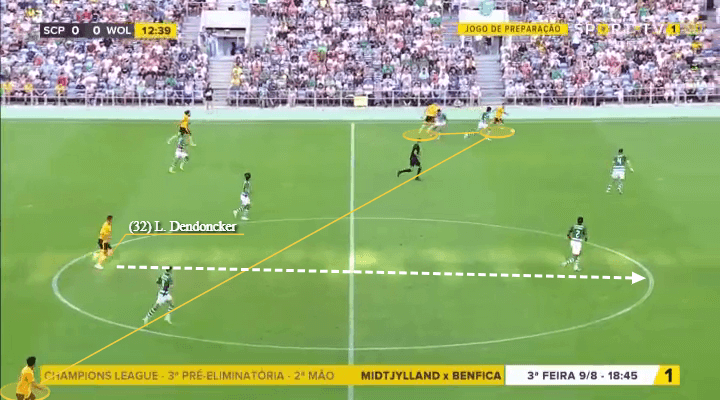 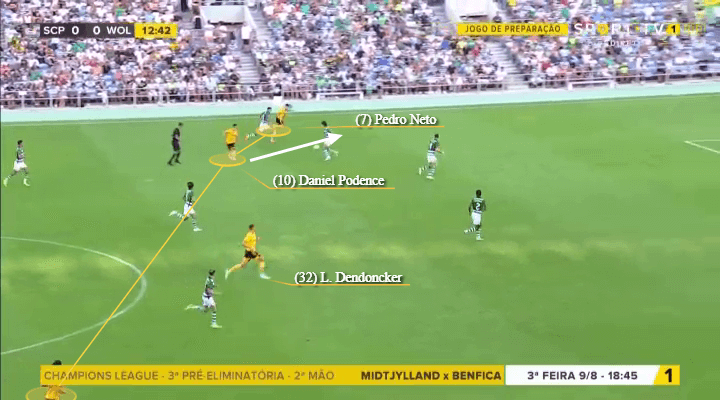 …and the midfielder’s presence in a goalscoring position helped force a rash challenge on Neto which brought the penalty from which Neves opened the scoring. 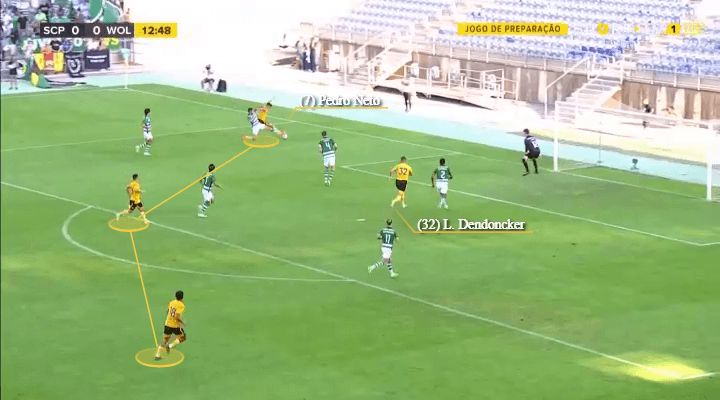 The fluidity of the front three was on display again late in the first half.

Podence and Gibbs-White swapped positions, the latter taking up a No 10 role with Podence and Neto running ahead of him. 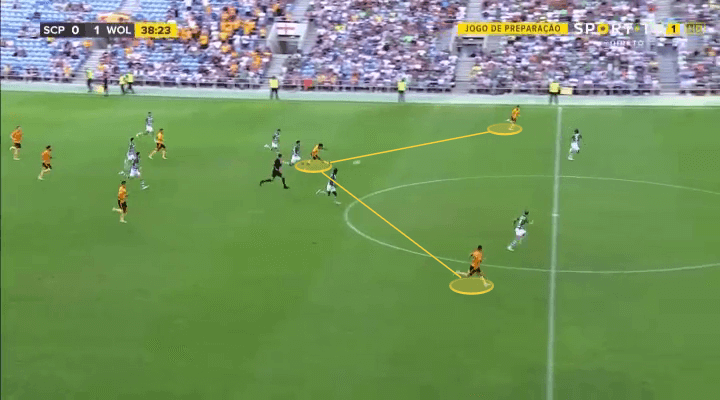 On the stroke of half-time, they adopted a different shape, with Podence as the front-runner and Gibbs-White and Neto as dual No 10s. 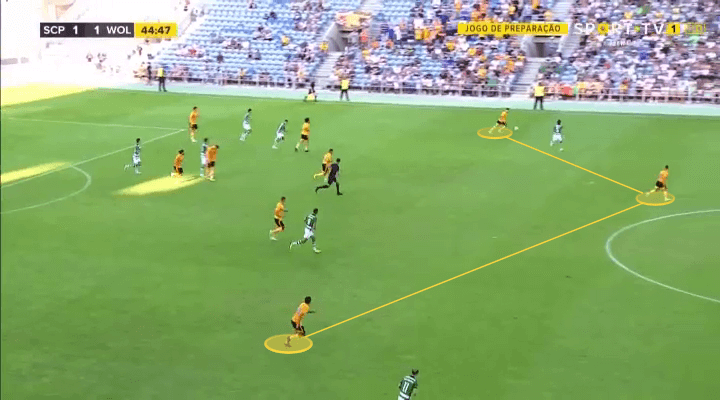 Patterns were harder to discern in the second half because there were so many substitutions but 24 hours later and a few miles to the south in Faro itself, Lage got a look at his alternative option when Hwang made his first appearance of pre-season in a largely second-string team against Farense.

The relative lack of match preparation for the South Korean makes him unlikely to start against Leeds but he showed that he is the closest thing Lage has to a like-for-like Jimenez replacement.

While Hwang’s preferred position is out wide, he largely played as a relatively orthodox No 9 on Sunday — a role he has played before for previous clubs.

As he showed on 11 minutes, he was happy to hold up play, receive balls from midfield and lay them off. 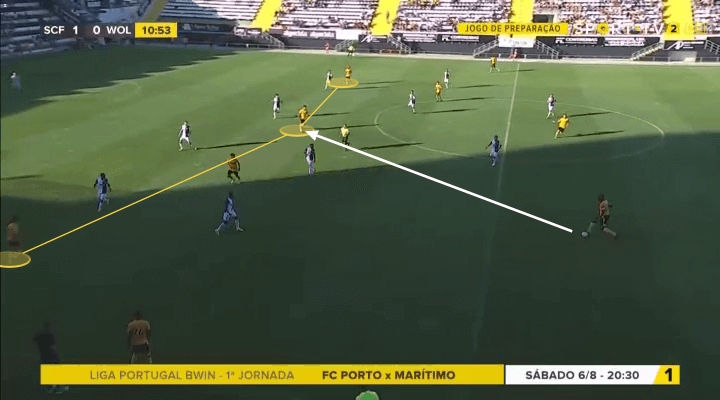 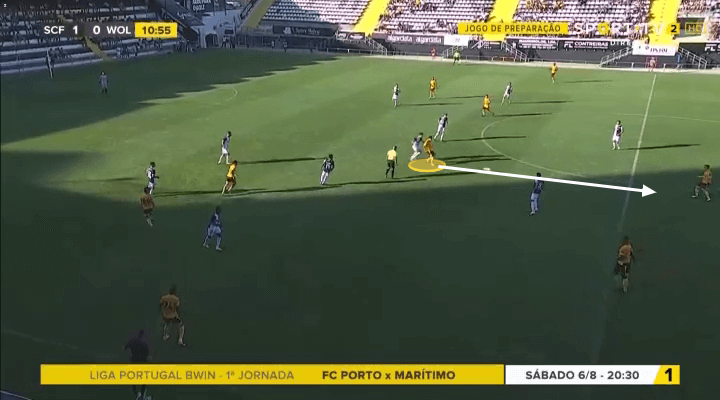 He was also eager to run behind the Farense defence, as he showed on 17 minutes when racing onto a Cundle through ball… 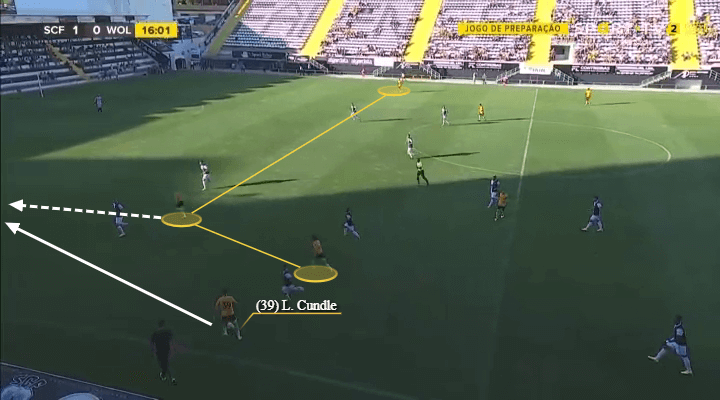 …and again in the 28th minute when he chased a channel ball by left-back Toti. 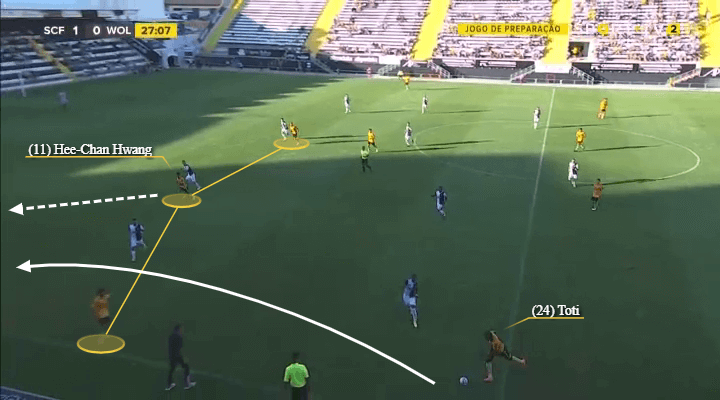 In the first minute of the second half, Hwang showed his ability to take down a Wolves defensive clearance, lay it off and then burst into the box. 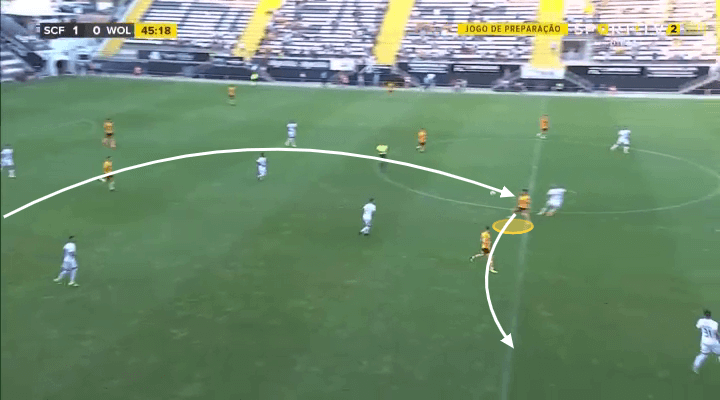 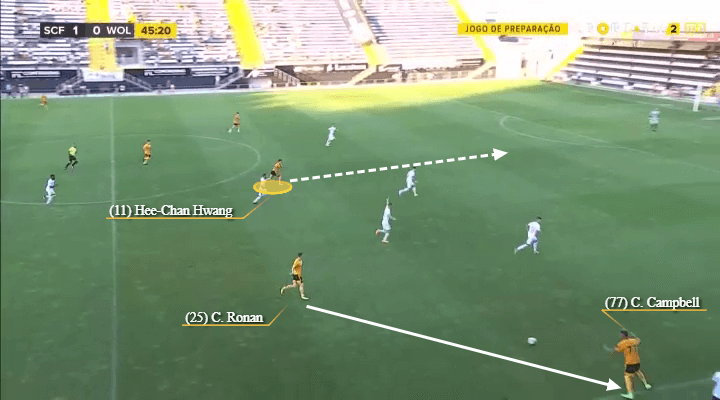 As stated, Hwang is unlikely to start at Elland Road today, but his presence on the bench will give Lage an option from the bench.

In the meantime, Gibbs-White, Podence and Neto will be on a mission to prove that intelligence and freedom can compensate for a lack of a traditional No 9’s beef.

‘Fuelled by anger’: politics loom larger than ever at Edinburgh fringe | Edinburgh festival 2022