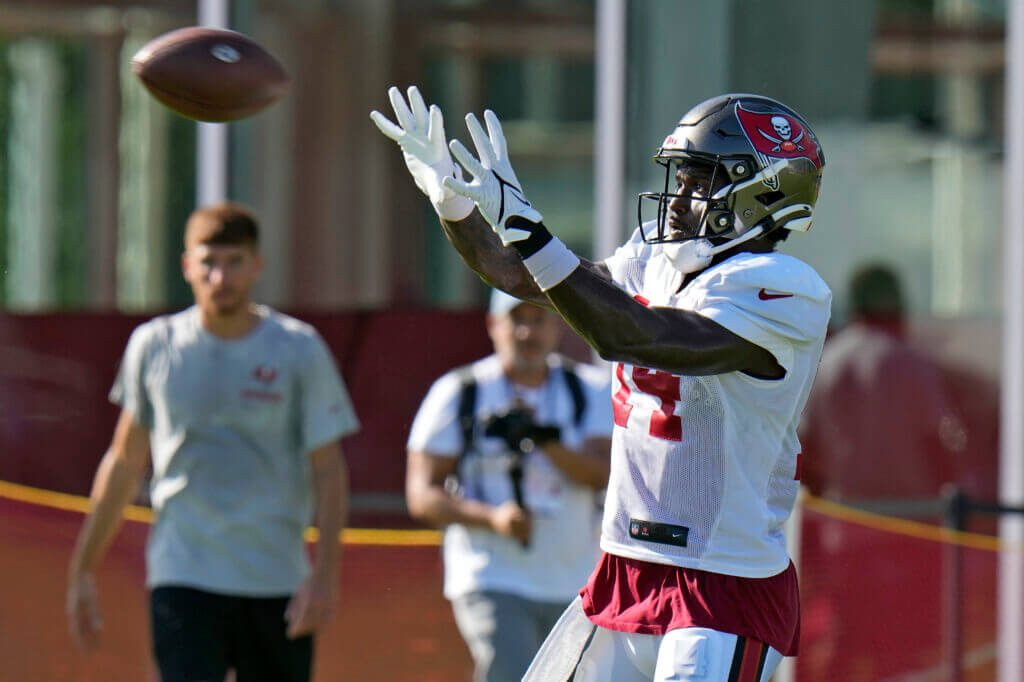 It’s just the first step of many in his recovery, but Friday morning saw Buccaneers receiver Chris Godwin back at practice for the first time since he tore the ACL in his right knee in December.

“Good to see him out there running around, getting some individual work in,” head coach Todd Bowles said after practice. “It’s always a plus to see him in uniform.”

Godwin had surgery on Jan. 3, so he’s just over seven months into his recovery, an impressive turnaround for his injury. He had been a spectator at practice during the first week of workouts, but Friday had him dressed in his white No. 14 jersey, stretching and warming up with the team before practice and wearing a protective brace on his right knee. He went through positional drills with the other receivers, making an over-the-shoulder catch, but was held out of all full-squad work against defenders, a reminder that a full recovery is still a while off.

Video: Chris Godwin doing some positional work with receivers as well in first day back at practice. pic.twitter.com/T1WdxTwnIo

“We’re not going to rush him,” Bowles said of Godwin’s gradual progress. “We’re just glad to see him out there working right now. As it goes along, we see.”

Given that quarterback Tom Brady had a veteran day off Wednesday on his 45th birthday and the Bucs didn’t practice on Thursday, it’s significant that he wasn’t at practice again Friday, with an excused absence to attend to what the team called a personal matter. Asked if he expected Brady back for Saturday’s practice, Bowles said, “We’ll let him do what he needs to do. If he’s back tomorrow, that’s great, but we’ll keep in touch and monitor that.”

Brady has former Patriots teammate Richard Seymour being inducted into the Pro Football Hall of Fame this weekend, but is unlikely to take time away from the team for that. He attended last year’s ceremonies for Peyton Manning, but did so with several Bucs coaches who worked with Manning, and it coincided with a day off in the team’s schedule.

Just as Godwin returned to practice, the Bucs saw an all-too-familiar rite of August: receiver Mike Evans leaving practice with a potential (if minor) hamstring injury. Evans has had persistent problems with his hamstrings, going back to his first spring as a rookie in 2014. It’s likely to result in rest but would have to be significant to impact the start of the regular season, which is still more than five weeks away.

“I saw him walk in,” Bowles said. “He might have tweaked a hamstring.”

Bowles has already said that many starters won’t play in next weekend’s preseason opener against the Dolphins, so it’s possible that Evans would be held out of upcoming joint practices between the two teams on Wednesday and Thursday as well.

Another wrinkle in left guard competition

The Bucs have already had three different players work at least two days as the first-string left guard — Aaron Stinnie, Brandon Walton and Nick Leverett — though second-round rookie Luke Goedeke has yet to do so. Bowles said the other guards are more familiar with the offense having been here last season, so it’s more letting Goedeke learn without starting right now.

“He’s still in the mix. The other guys have been here, experience-wise,” Bowles said. “As we install, they kind of know it already. It’s good for Luke to see somebody do it before he does it, rather (than) just go out there and make mistakes that way. We’re getting the older guys in there some that have been here. He’ll play a lot. It’s still an open competition.”

Leverett, who would be the team’s backup center with Ryan Jensen sidelined with a significant knee injury, worked as the first-team left guard Wednesday and again Friday, with second-year pro Robert Hainsey still working as the top center.

Veteran running back Giovani Bernard, who was held out of practice on Tuesday and Wednesday with an undisclosed injury, was back practicing Friday, while cornerback Rashard Robinson and rookie outside linebacker JoJo Ozougwu remain sidelined. Second-year safety Troy Warner, competing for the fifth safety spot if the Bucs carry one, was a spectator Friday as well.

Undrafted rookie corner Don Gardner, who opened training camp on the physically unable to perform list, continues to make up for lost time, and Friday he caught an interception in the back of the end zone off of backup quarterback Ryan Griffin.

Think like a trucker: 15 ways to survive Britain’s summer of holiday queues and delays