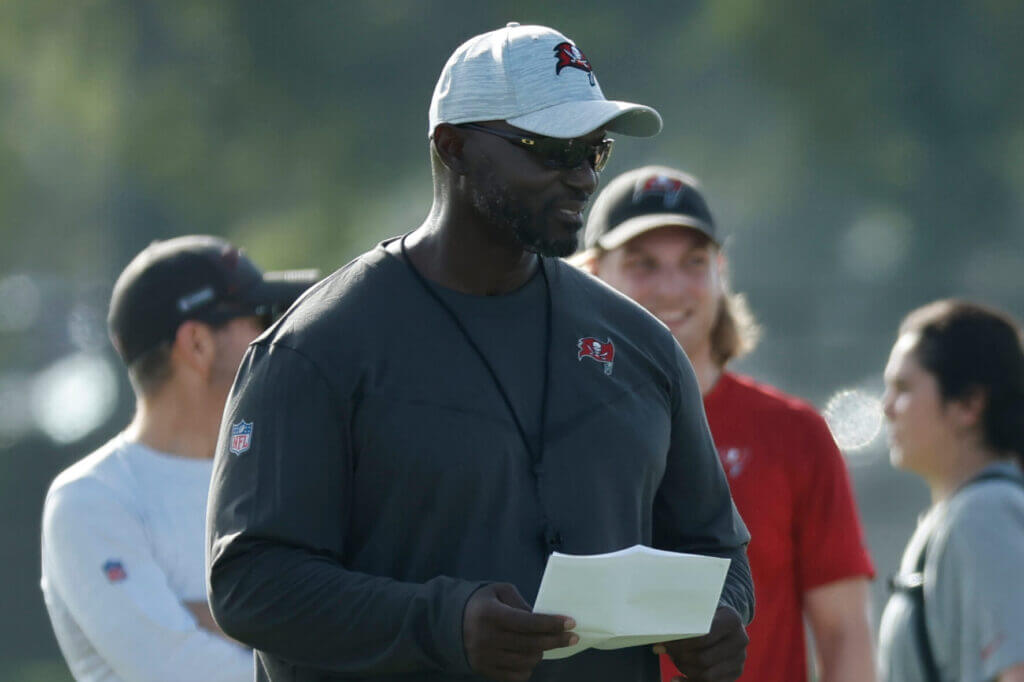 If you were holding out hope that Tom Brady might get a cameo in next week’s Bucs preseason opener at home against the Dolphins, think again.

Playing stars in the preseason is always a risk/reward calculation, and Bucs coach Todd Bowles is playing it safe, saying Wednesday that Brady won’t play in the opener despite having a new center to break in. Joint practices with the Dolphins next week will serve much the same purpose, he said, and the Bucs also have joint practices the week after in Nashville with the Titans.

“There will be a lot of starters that won’t play in that (Dolphins) game,” Bowles said. “They’ll get plenty of work in practice, though. The two practices we’ll play similar to a game. We want to see some of the young guys play and build our depth a little bit.”

Bowles is being careful with his veterans, giving Brady two maintenance days in the first seven practices, with no practice Thursday as well. With Brady off and the team practicing indoors in “spider” pads, the Bucs also gave receivers Mike Evans and Julio Jones, tight end Cameron Brate and linebacker Lavonte David the day off Wednesday as well.

There were no preseason games in Brady’s first season in Tampa, and he played the opening series in last year’s preseason opener, but that didn’t amount to much. Brady played all of six snaps, going 1-for-2 with a 9-yard completion and a sack, so the dropoff to not playing next week isn’t a substantial one.

Bucs are practicing indoors today, their first inside this training camp. Welcome break from a hot, sunby start to camp. pic.twitter.com/lsXsroWrl6

One reason to play Brady a little is the sheer number of newcomers in the Bucs’ passing game he’ll want to find a rapport with. That includes receivers Jones and Russell Gage, tight end Kyle Rudolph plus drafted rookies in running back Rachaad White and tight ends Cade Otton and Ko Kieft.

The Bucs continue to keep second-year pro Robert Hainsey as their starting center, as he has been since veteran Ryan Jensen was lost last week to a knee injury that will sideline him several months, if not the entire season. Wednesday’s practice brought another contender at left guard, with Nick Leverett (who would be the second center right now) working with the first team. Veteran Aaron Stinnie and rookie Luke Goedeke, the top options for the left guard spot, both worked with the second line Wednesday, with John Molchon filling in as the second center.

Brady not playing against the Dolphins means he won’t play in Raymond James Stadium for another 53 days. The Bucs finish the preseason with two road games, then open the season at the Cowboys and Saints before returning home in Week 3 against the Packers on Sept. 25.

Tuesday brought major headlines with the Dolphins getting sanctioned with the loss of high draft picks, fines and executive suspensions as an NFL investigation determined the team had violated league tampering rules after impermissible contact with Brady while he was under contract with the Patriots and then the Bucs.

There could be some awkwardness when the Dolphins come to town next week for two days of joint practices ahead of their preseason game, but Bowles said it has no real bearing on his team.

“The league took care of it. It has nothing to do with us,” Bowles said. “We try to keep outside noise to a minimum. There’s nothing to be said on that front. I really don’t know anything about it.”

The extent of Brady’s conversations with Miami while in Tampa is unknown, and he won’t face any penalty from the league. He’ll face questions about it, but not likely anytime soon. The team is unlikely to make him available for questions next week and could even wait until Week 1 and his normal game-week session with reporters more than a month from now.

Carlton Davis has a goal of 30 takeaways for the Bucs defense, something they haven’t done since 2013. More training camp notes, plus kicker battle and injury updates: https://t.co/Vr8pdxAzoF

The Bucs have had only three days of fully padded practices, but a week into training camp, Bowles was asked which players had taken the biggest step forward in improving since OTAs and minicamp this summer.

“I really like what (receiver Jaelon) Darden’s doing right now,” Bowles said. “His approach all offseason has been outstanding. He works hard, he keeps his head down and he plays ball.”

Veteran safety Logan Ryan, still carving out a role between safety and nickel in a deep and flexible Bucs secondary, has also exceeded expectations for Bowles.

“Logan Ryan has come in and been a joy to work with,” he said. “His work ethic, his intelligence and the way he prepares for practice is unbelievable. Going out there, trying to learn something every day and doing the right things, as well as helping the other guys.”

Otton, a fourth-round pick from Washington, returned to practice last week for the first time since his ankle injury in November, and he’s making a strong impression right away as he tries to carve out playing time with veterans Brate and Rudolph.

“Cade’s a very cerebral player. You won’t see all the speed and power, but you look up and he’s always doing the right things, always in the right place. He has great hands and he understands how to play the game,” Bowles said. “I think a lot of young players don’t have that. He has that coming in, so that’s going to benefit him going forward.”

Bowles said Otton needs to get physically stronger and will do that with more time working with the team’s strength coaches, but as he gets stronger, he’ll be able to help the team this year. Brate said he has liked what he has seen so far from Otton as well.

“Super smart, already a really good blocker, like technically, you can tell he was coached really well,” Brate said. “He’s a guy who’s going to help us out a lot. Brings a lot to the table.”

One peculiar note with Otton is that he doesn’t play or practice wearing gloves, unusual for a receiver or tight end.

“I don’t know how he practices with no gloves,” Brate said. “I don’t know if he’s going to bring that to games, too. I’m trying to work on that. But he’s a really good young football player that’s definitely going to help us out.”