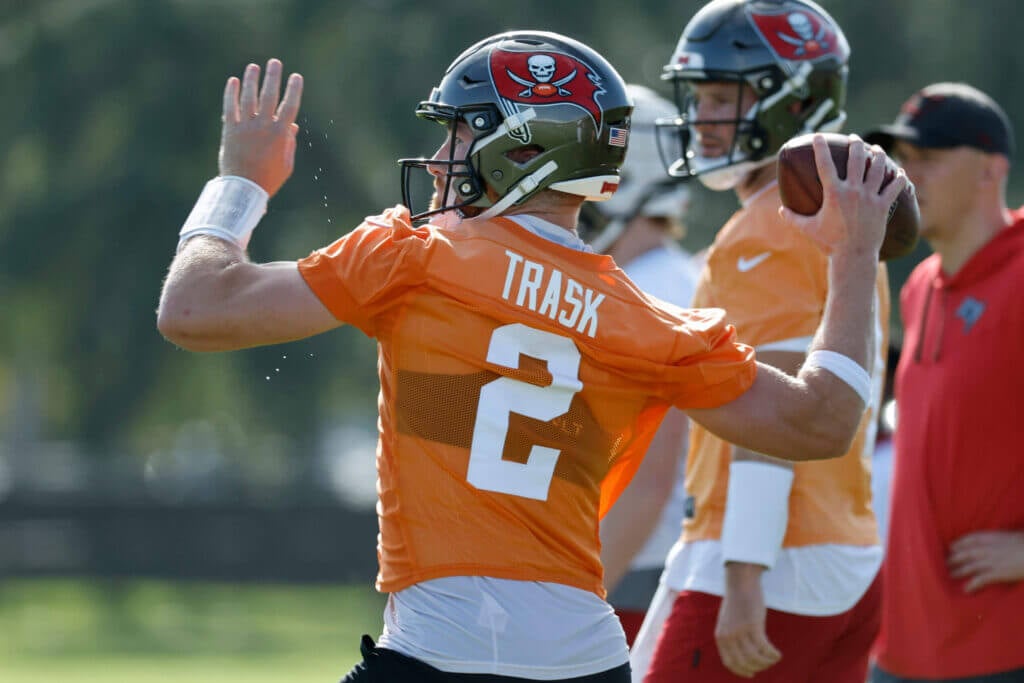 August is a very important month for Bucs backup quarterback Kyle Trask as his best and perhaps only window this fall to show coaches how he has progressed from his rookie year. And the month hasn’t started well at all for him.

On Friday, the Bucs made the curious decision to post as their “Play of the Day” a short highlight video showing Trask throwing a high, wobbly pass that was tipped by receiver Jaelon Darden and intercepted by cornerback Jamel Dean. There has been an emphasis in camp on the defense getting more takeaways, but all Bucs fans seemed to notice was the ugly throw from Trask, and after hours of negative responses, the team’s official account went so far as to delete the tweet.

There was more trouble Sunday, as Trask threw a pair of interceptions in 11-on-11 drills. The first was a high throw that went off the hands of rookie tight end Cade Otton (who had a great day otherwise with three touchdown catches) and into the hands of defensive back Ross Cockrell, and the second was worse, with Trask throwing a short pass directly into the arms of rookie outside linebacker Jordan Young.

Trask hadn’t had a particularly bad camp before Friday, with coach Todd Bowles praising him for his decisiveness in throwing with a better understanding of the offense compared to last year. Drafted with the final pick of the second round out of Florida last year, Trask was picked as a potential eventual successor to Tom Brady, and as the No. 3 quarterback last year, he was inactive every week, not playing a single snap.

There were concerns about his development this spring when quarterbacks coach Clyde Christensen said he didn’t see there being any competition for even the top backup job, all but giving it to veteran Blaine Gabbert. Bowles said it would be an open competition like any other position, but once a player’s position coach is on the record as saying, “I don’t see him competing,” it’s only so much up for grabs.

That makes this month’s three preseason games a crucial opportunity for Trask to show his potential, because if he’s the No. 3 every week, another full season could pass without him getting a chance to play, barring injury.

“That definitely is one of our goals, to find out as much as we can about Kyle during the preseason,” Bucs general manager Jason Licht said in the opening week of training camp.

Video: Tom Brady back to normal with Bucs QBs in positional drills this morning. pic.twitter.com/qvYheOFljC

The best scenario for Trask would be the team opting to dress all three quarterbacks at some point this season, such that if the Bucs could get a comfortable lead late, it could be Trask who gets the mop-up duty that Gabbert had in four games last year, at least to get the experience of playing in a real game.

How Trask fares in the preseason — it’s reasonable to think he’ll get the most reps of their four quarterbacks — will help determine how seriously the Bucs will pursue a veteran quarterback next spring if Brady retires or signs elsewhere. It’s unlikely the team would turn over things to an unproven young passer, but a strong showing from Trask this year could be the difference between signing a veteran as competition for him, or spending to bring in a presumed starter before Trask even has a chance.

Bowles got a day off from taking questions from the media, so assistant head coach and run game coordinator Harold Goodwin fielded them, and he said the ongoing competition at left guard was wide open.

Veteran Aaron Stinnie, the most experienced of four players competing for the job, was back working with the first team Sunday, doing so for the fifth day in 10 practices. Backups Nick Leverett (two days) and Brandon Walton (three days) also have worked with the starters in camp, and there’s certainly second-round pick Luke Goedeke, who has worked as the second line’s left guard.

“At some point, I have to put my foot down and go ahead and pick a guy so we can build that communication with Donnie (tackle Donovan Smith) and with (Robert) Hainsey at the center spot,” Goodwin said.

Goodwin had praise for Goedeke, saying he’s physical, smart and improving, and he gave a vote of confidence to Hainsey, who has stepped in as the starting center with Ryan Jensen sidelined by a significant (and potentially season-ending) knee injury.

“I trust him,” Goodwin said. “I feel good about him at the center spot.”

The Bucs had a live period at the end of Sunday’s practice with full-contact tackling, ramping up to joint practices with the Dolphins on Wednesday and Thursday and then Saturday’s preseason opener. Goal-line drills were especially hard-hitting, with rookie running back Rachaad White going up the middle for two touchdowns behind solid blocking.

As the Bucs work with three new starters on the interior offensive line, such physical periods are crucial preparation, going up against massive defensive tackles such as Vita Vea and Akiem Hicks. Goodwin said going up against those two is “like trying to stop a large motor home in motion,” with Will Gholston and rookie Logan Hall rotating in as well.

Bowles said the two practices with the Dolphins will have the same rules of engagement as any other Bucs practice — much the same format even, just with drills on two fields simultaneously. In addition to some positional work and 7-on-7 periods, they’ll have 11-on-11 drills, with the Bucs offense against the Dolphins defense on one field, and Miami’s offense against Tampa Bay’s defense on the adjacent fields.

The Bucs will do the same the following week with two joint practices with the Titans in Nashville ahead of their preseason game Aug. 20.

Bucs receiver Mike Evans, who left with a minor hamstring injury Friday, has been a spectator at practice the past two days, and a handful of veterans — receiver Julio Jones, tight end Cameron Brate and linebacker Lavonte David — had scheduled maintenance days Sunday as well. Receiver Chris Godwin has practiced three days in a row in his first action since knee surgery, though he has been limited to positional work and is yet to handle any contact or 11-on-11 drills as the team brings him back slowly.

Receiver Breshad Perriman has missed a full week with an upper leg injury, though Bowles suggested he could be back before the practices with the Dolphins. With Godwin limited and Evans, Jones and Perriman held out Sunday, more reps could go to the receivers competing for the fifth and sixth spots on the 53-man roster, especially Tyler Johnson, Darden, Scotty Miller, Cyril Grayson and rookies Jerreth Sterns and Deven Thompkins.