CINCINNATI — Chuckie Robinson had never seen “Field of Dreams,” so he was unfamiliar with the character of Moonlight Graham.

In the movie — as in real life, as first popularized in W.P. Kinsella’s 1982 novel “Shoeless Joe,” the basis for the film — Graham appeared in just one big-league game for the 1905 New York Giants and never got an at-bat.

Robinson was called up to the big leagues for the first time Thursday, taking the extra roster spot Major League Baseball afforded for the Field of Dreams game in Dyersville, Iowa.

Robinson didn’t get into the game Thursday, but had the game gone to extra innings, he would have. After already using a pinch-hitter for starting catcher Michael Papierski in the seventh inning, Austin Romine’s spot was coming up fourth in the ninth inning and manager David Bell had Alejo Lopez on deck to pinch-hit. Had the Reds scored two runs to force the 10th, Robinson was the only catcher remaining.

When relayed the story of Graham afterward, Robinson smiled.

“That could’ve been me today,” he said. “I could just walk out into the corn.”

Robinson didn’t get in the game and he didn’t walk out into the corn, but he did return to Iowa. Robinson flew back to Cincinnati with the team after Thursday’s game, but drove his truck from Cincinnati to Louisville, where he got on a flight to Des Moines, Iowa, where the Triple-A Louisville Bats were facing the Cubs’ Triple-A affiliate this week. Robinson even started Saturday and had a hit and an RBI in the Bats’ 5-3 win. Robinson is hitting .265/.319/.402 with five home runs in 54 games between Double-A Chattanooga and Louisville this season.

Robinson, 27, was enjoying the first call-up of his career. Before being called up, he was on the Reds’ taxi squad in Miami, Milwaukee and New York before being activated Thursday morning.

“Everything that has been presented to me in this last week-and-a-half has all been new: big-league stadiums, the travel, the hotels, and then to top it off with the Field of Dreams game, I mean, it’s been a really good road trip to say the least,” Robinson said.

As much as anything, it was a good learning experience for Robinson to see just how different preparation is for catching in the big leagues. He worked with catching coach J.R. House and was in the scouting report meetings every day along with the other catchers, pitchers and coaches.

“It’s been an awesome experience,” Robinson said. “I’ve learned so much, just kind of how to move, you know? Because there’s things that just don’t fly up here, you learn those things, like dressing the right way and all that goes along with being a true professional.”

As much as anything, Robinson said, he kept his eyes and ears open, especially watching the veteran players, like newly acquired catcher Austin Romine, who started his 341st career game behind the plate on Sunday.

“The preparation as far as game planning is really big, because paying attention to the games, it really comes down to one or two pitches in the game,” Robinson said. “You have guys, one through nine, (in the order) you got some guys who can bang. In the minor leagues, when you get to seven, eight, nine, you can have some average hitters who are true professionals, but up here you have to respect everyone and attack everyone.”

The Reds have brought up some of their minor-league catchers at different times this year to be on the taxi squad. Starter Tyler Stephenson said the taxi squad experience was really important to him in 2020 and helped him feel comfortable in the big leagues when he became a regular in 2021.

“They’re not getting at-bats, that’s the downside, but there’s a lot of work they do so when they come here, they’re acclimated,” Bell said. “J.R. commits a lot of time to those guys. Once they’re here and they’re active, there’s a limit to how much they can do. I think we made the most of it.”

As for Robinson, Bell said he’s not worried about him getting his chance in the big leagues — and certainly expects that, once he does, it’ll last longer than an inning.

“I predict that Chuckie will be back and stay,” Bell said. “He’s made great progress. He knows there’s no guarantees. It was a really valuable time he spent with us on the road.”

Joey Votto played in his 1,989th game on Sunday, more than any other Canadian in the history of MLB.

Votto passed Hall of Famer Larry Walker, who played a total of 1,988 games for the Expos, Rockies and Cardinals. Matt Stairs (1,895), Russell Martin (1,693) and Justin Morneau (1,545) round out the top five in games played by Canadian-born players.

Run at your own risk 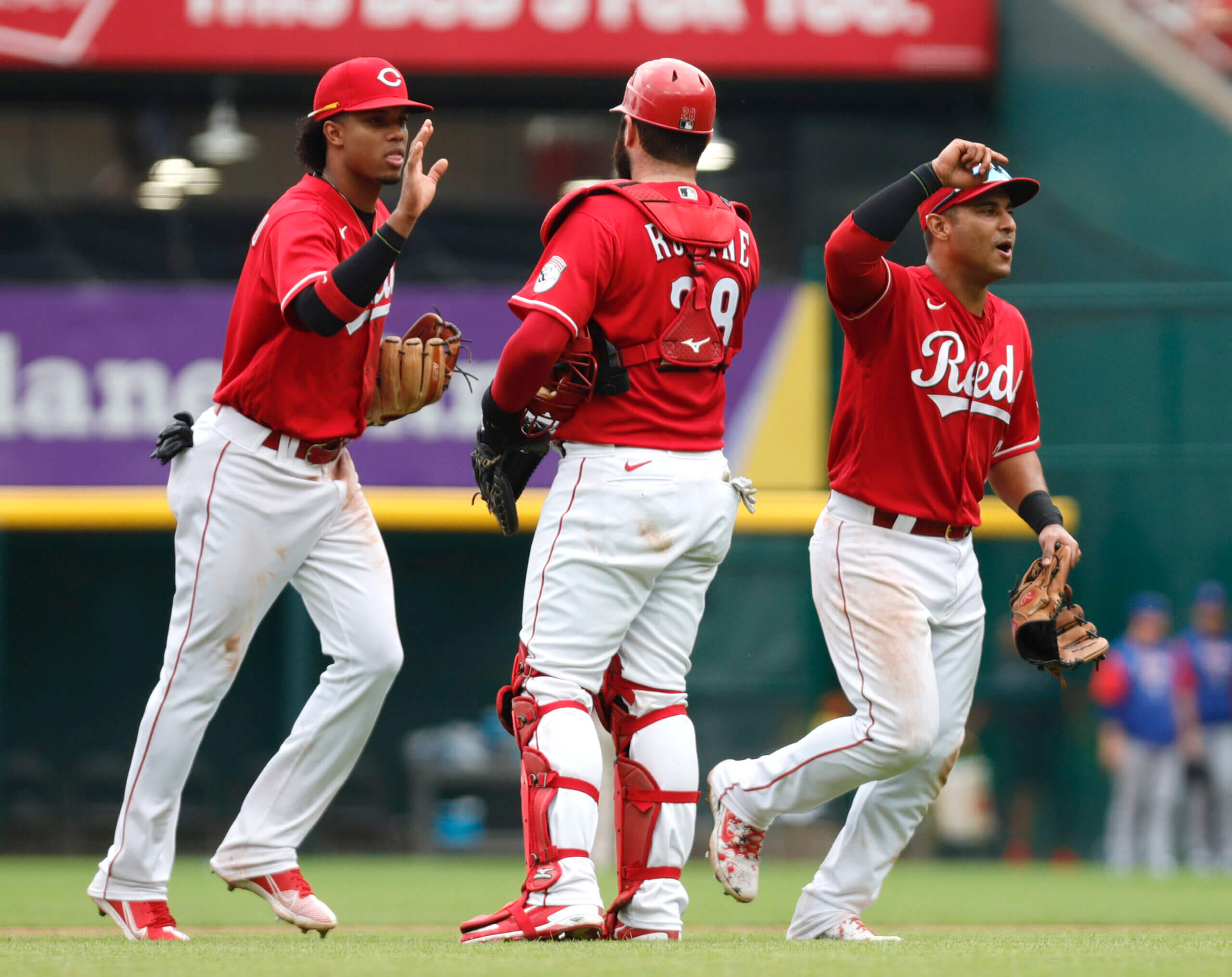 Left fielder Albert Almora Jr. picked up the ball and fired a perfect throw to shortstop Jose Barrero, who fired a 93 mph dart to Romine, getting Happ out at the plate easily in the Reds’ 8-5 win. It was the Reds’ 28th outfield assist of the season, tying the Guardians for the most in the majors.

Dunn, backing up the play, had a perfect view of it.

It was Almora’s fifth assist of the season. Aristides Aquino, in just 40 games, leads the Reds with eight. Tommy Pham had seven (in 83 games) and Tyler Naquin and Nick Senzel both have three. Jake Fraley and TJ Friedl both have one, as well.

The combination of a 26-man roster and a designated hitter means the Reds can take their time with second baseman Jonathan India, who hasn’t played since being hit by a pitch in Thursday’s Field of Dreams game.

India was still limping during Saturday’s game, Bell said, but the hope is he can avoid a stint on the injured list.

Even with India unavailable, Bell has four position players at his disposal because of the rule limiting the number of pitchers on the roster.

“(Playing shorthanded) can definitely come into play, but it’s easy to manage around that,” Bell said. “You just know what you have going into the game.”

That calculus could change Monday if Senzel is unavailable. The outfielder left Sunday’s game with hamstring tightness. Bell said Senzel may not start Monday, but he doesn’t think it’s serious. That would take it from a four-man bench to a three-man bench, where it could come into play. The Reds have outfielders Friedl and Stuart Fairchild on the 40-man roster, along with Robinson and fellow catcher Mark Koloszvary.

• RHP Art Warren (right flexor pronator) threw a scoreless inning in a rehab assignment in High A. He could return this week.

• IF Mike Moustakas (left calf) could return Friday when he’s eligible to come off the IL, Bell said.

“That’s where his mind is,” Bell said. “From what I hear from the trainers, he has a shot to do that.”

• RHP Connor Overton (lower back) has been throwing bullpens in Arizona. He’s scheduled to have one or two live batting practice sessions before getting into rehab games.

“It’d be great to get him back in September for our team and for Connor, get him back pitching,” Bell said. “It’s been a long road, but it sounds like he’s getting near the end of it.”

• RHP Hunter Greene (right shoulder) is back to playing catch. Bell said the hope is he can return to the rotation.

The week that was

The Reds finally managed to record a win in their last chance of the week on Sunday, topping the Cubs 8-5 at Great American Ball Park. The Reds were swept by the Mets in three games at Citi Field before losing to the Cubs in Iowa on Thursday and then in Cincinnati on Saturday.

• High-A Dayton Dragons (51-55): In his second start with the Reds organization, lefty Steve Hajjar struck out seven in four innings Saturday, but was put on the injured list Sunday with a shoulder impingement. Acquired in the Tyler Mahle trade, Hajjar allowed just one run on two hits with a walk.

• Single-A Daytona Tortugas (42-63): RHP Sam Benschoter is 3-3 with a 3.91 ERA in 13 games and eight starts for the Tortugas. He has 74 strikeouts and just 15 walks (and four hit batters) in 48.1 innings. Wednesday against Lakeland, the former Michigan State pitcher struck out 10 batters, walking one and hitting one, while allowing a run on two hits over five innings.

(Top photo of Reds players in the outfield before the Field of Dreams game: Charlie Neibergall / Associated Press)