Cleveland Browns fans got their first look Saturday night at new quarterback Jacoby Brissett and most of it was fairly underwhelming: 13 of 23 for 109 yards and an interception. I’m not about to make too big of a deal over one half of one preseason game, and certainly, Brissett’s numbers were hurt by another miserable performance from second-year receiver Anthony Schwartz, but Brissett also looked about as I expected.

He’s a game manager who typically doesn’t make the big mistake but is slow to elude pressure and unable to create chunk plays down the field. For now, Brissett is the best the Browns have to offer for the first 11 games while Deshaun Watson is suspended.

We thought now was a good time to call in Indiana sports columnist Bob Kravitz, who covered Brissett when he was thrust into the starting role a few years ago following Andrew Luck’s stunning retirement.

Bob, I’ve maintained for weeks that Brissett isn’t good enough in a loaded AFC and the Browns should pursue Jimmy Garoppolo if they’re intent on remaining in the playoff chase while Watson is suspended. Am I wrong? Is Brissett good enough to hold serve and keep the Browns afloat until December?

Kravitz: Welcome to the Jacoby Brissett Experience. That stat line looks very familiar; we saw those kinds of performances — not great, not awful — throughout Brissett’s time here. If I was a Cleveland columnist — hey wait, I was a Cleveland columnist — I would certainly sign off on the idea of dealing for Jimmy G. Yes, Jacoby got the Colts off to a 5-2 start in 2019 before a late-season collapse, but he is what he is: A risk-averse quarterback who can manage a game but not win a game.

Can he keep them afloat? Again, I refer to the 5-2 start with Indy in 2019, and it’s not inconceivable he could keep the Browns somewhere on the periphery of the playoff conversation, but if I’m willing to throw $230 million at Deshaun Watson, Jimmy G. would be pocket change. (The irony here is that Matt Ryan only became available when he got upset at the Falcons’ pursuit of Watson).

Lloyd: Does talking about Cleveland sports give you PTSD? (For those who may not recall, Bob was a Plain Dealer columnist in the late 1980s and arrived just in time for The Fumble and The Shot).

There were so many similarities between the Colts and Browns last season (powerful running games, stout defense, questionable quarterback play) and you just touched on another one: Both teams now have new quarterbacks because of Watson.

It was stunning to me that the Colts, after cycling through veterans the last few years, had the chance to get a potential quarterback for the next 10 years in Baker Mayfield when he was available for pennies and instead said, “Nah, we’re good with Matt Ryan for a couple of years.” What does that say about how the league truly views Mayfield? But I digress …

What happened during that 5-2 start in 2019 and how did it all unravel? 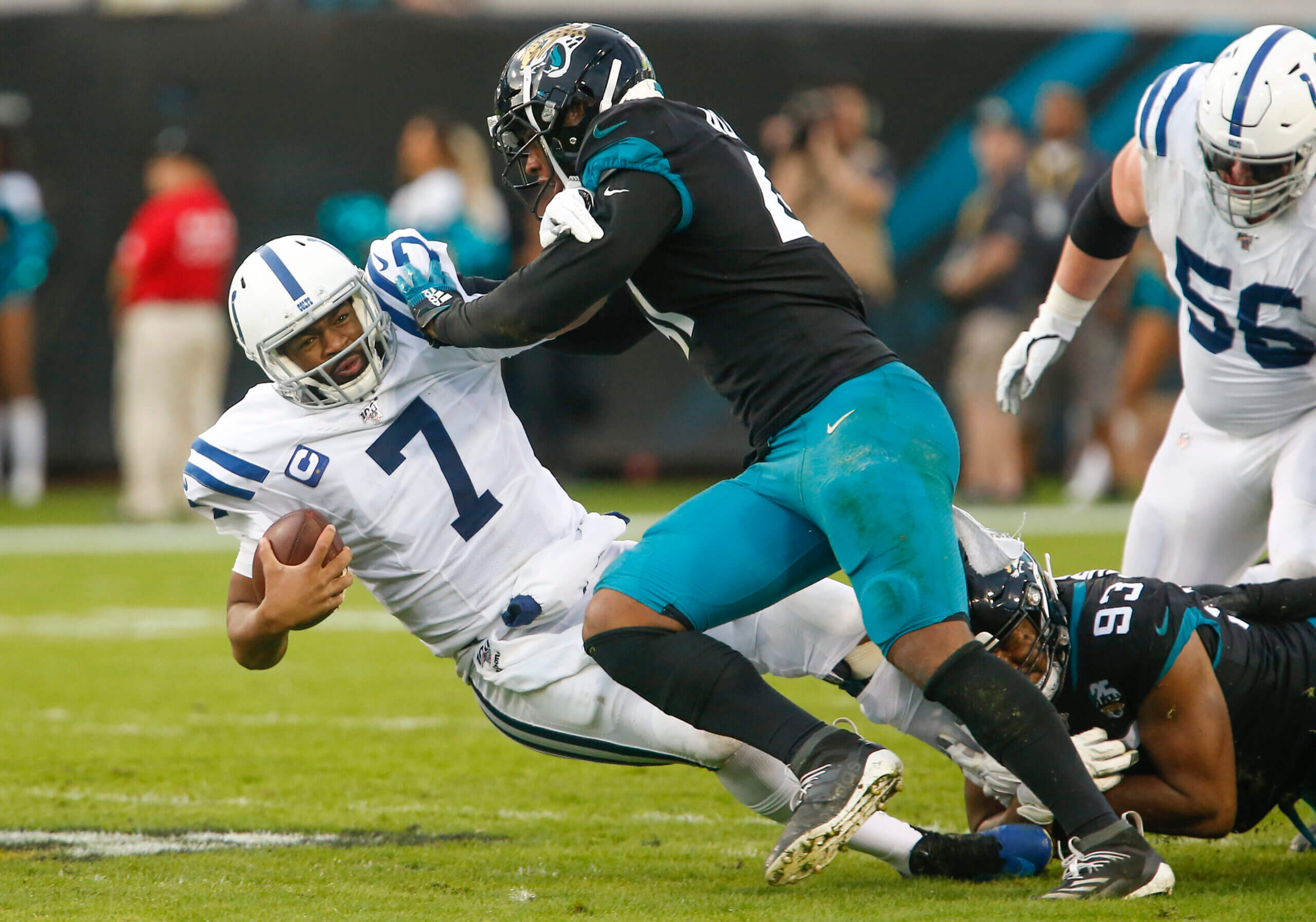 Right. Here it is. The Colts started 5-2, including a rousing victory over the Chiefs in Arrowhead, and I remember one member of the Colts organization asking me if I thought Jacoby was an MVP contender (seriously). But yeah, Jacoby was good, good enough, certainly, managing games along with a decent defense and Marlon Mack running the football.

Then it all kind of unraveled. As always, injuries played a role. Brissett suffered a knee injury, and while he was healthy enough to play, there was a marked decline in his play. Which begged the question: Was the decline related to the injury or was water just finding its level? Then add injuries to Mack and T.Y. Hilton and the strange situation that saw Eric Ebron eventually get let go, and an already limited offensive team had difficulties scoring points. Or, if my shaky memory serves, holding leads. Oh, and making field goals, too. Adam Vinatieri had a nightmare season and the Colts foolishly stood by him.

I guess the Browns could risk it with Brissett. Unlike in 2019, he’s not being summarily thrust into the starting role. With Watson, you knew something was going to happen, so Brissett got the snaps he needed in camp. But I think we saw enough in Indy and Miami to know that Brissett is a terrific backup and nothing more. Would I like to be wrong? Yeah, I would. Jacoby’s a good man. But …

Lloyd: You’re inadvertently giving Browns fans hope in Brissett. They’re reading the way you’re describing the Colts’ good start in 2019 with a decent defense and a sound running game and saying, “Hey we have that! And our rookie kicker is making 70-yard kicks in warmups! Maybe this won’t be so bad after all!”

Here’s why I believe the Browns should pursue Garoppolo: From Weeks 5 to 12, the Browns face Justin Herbert, Lamar Jackson, Joe Burrow, Josh Allen and Tom Brady. Plus the Patriots at home and Dolphins on the road. Garoppolo might be the difference in one or two of those games, which could be the difference in making or missing the playoffs. Although I concede you’ve made a compelling argument that Brissett “might” be good enough.

Kravitz: Put it this way; I don’t think the Browns are doomed to a 4-7 start with Brissett, although that murderers’ row of quarterbacks is a little intimidating. He can keep the Browns afloat, but I guess it depends on what your definition of “afloat” is. If I was the Browns, and I still thought I had a chance to make the postseason this coming season, I’d kick the tires on Garoppolo, who’s been to a Super Bowl and has had the kind of success Brissett has not. This is a quarterback league; as the Colts found out a few years back, there’s only so far you can go with mediocre. (And I should mention once again, Vinatieri was having a nightmare year, which didn’t help the Brissett-led Colts, especially during the second half of the season).

To me, when you sign Watson for the GDP of Bolivia, you’re all in. Getting Garoppolo tells the fans — and the players in that locker room — that you’re not punting on the 2022 season. And Browns fans deserve good things (he said, after having lived through The Fumble and other Cleveland-based sports atrocities).

Lloyd: Please, for the love of all that is pure and holy, don’t tell me the next chapter is The Contract.

Much more than a snack: why the UN owes it to the world to recognise pretzels as a cultural treasure | Food