The Nashville Predators were overmatched against the Colorado Avalanche. They played their third-string goaltender for most of the first-round series, and the Avalanche’s depth advantage was palpable. Even in Game 4 of the sweep, when Nashville played well and Colorado struggled, coach Jared Bednar’s team came out on top.

But if Nathan MacKinnon, Cale Makar, Gabriel Landeskog and company are going to reach new heights this year, they’ll have to go through much tougher teams than Nashville, starting with St. Louis in the second round. The Blues bludgeoned Minnesota 5-1 in a closeout Game 6 on Thursday, their third victory in a row.

In anticipation of the second-round matchup, four league scouts weighed in on what they see in the Avalanche, the matchup, what it would take to slow the West’s No. 1 seed and more.

Note: Some answers have been edited for clarity and length.

Who is the Avalanche’s most underappreciated player?

Scout 1: Probably Devon Toews to some degree. I don’t think Landeskog is underappreciated by any stretch as a captain, but I think he’s the biggest driver on the team. Most people would think it’s probably MacKinnon or whatever. I think it’s the captain.

Scout 2: Valeri Nichushkin. Swiss Army knife. Able to contribute up and down the lineup.

Scout 3: They’re all appreciated. That’s such a deep team, and everybody contributes, and everybody’s got a piece of it. I wouldn’t say anybody. They’re just that good.

Scout 4: They have the slew of superstars, and then they have a very nice complementary core of players who are good hockey players who would probably get much more ice time on non-playoff teams or bubble teams. There’s probably a couple, like Nichushkin. You look at where he came from in Dallas and as a young kid. It looks like he really fits in, in Colorado, and he can play up and down the lineup.

Another guy I really like is J.T. Compher. He’s a guy who can fill in, in the top six if need be. They have a great luxury of having players like MacKinnon and Landeskog and Mikko Rantanen, but if for some reason one of those guys can’t be out there for the last minute, Compher is one of those guys who can go out there and is capable, whether it’s protecting a one-goal lead or a defensive situation or trying to score a goal to tie the game up. You can’t just rely on your star players because other teams have star players as well or great defensive players, and they’re going to put a game plan together to shut down your stars. You always need the secondary scoring and play in general, and those are two guys who can bring that.

What or who is the Avalanche’s biggest X-factor?

Scout 1: I fucking just love Colorado. I love the way that team is built. I do think Calgary could give them a little bit of a run, and I think St. Louis could. St. Louis has something because of the way they play off the cycle, and they’re big and heavy — that will really test some of the Colorado D. I think the Josh Manson addition was great and huge. But Samuel Girard, how is he going to react to some of these big guys, matchups? They would be able to challenge the Avalanche, but I don’t see anyone beating them, actually.

Scout 2: Darcy Kuemper. Brought in as a final piece and expected to be a big part of getting over the hump.

Scout 3: MacKinnon is the lead dog. He’s the lead pony, but if he’s not going, they’re not a team that everybody else won’t go. They’ve got a lot of self-starters over there. But he’s an impressive player, and it just seems like he’s on a bit of a mission right now.

Scout 4: For me, it’s goaltending. I think it’s goaltending on both sides. Pavel Francouz is an adequate No. 2, but I think they need Kuemper to be healthy. Jordan Binnington has proven he can win a Stanley Cup, but he has not played like that since, and Ville Husso has such a small body of work. It’s a lot more pressure, especially as you go into the second round. For Kuemper, I don’t think he’s had any real long runs in the playoffs. Playing in Arizona, they didn’t do a lot of winning there. Everyone can say they’re preparing the same way, but as Game 1 starts and you move through the series — especially on a team that’s expected to not just go on a long run but probably win the Stanley Cup this year — pressure adds up, which is where the mental game comes into play. 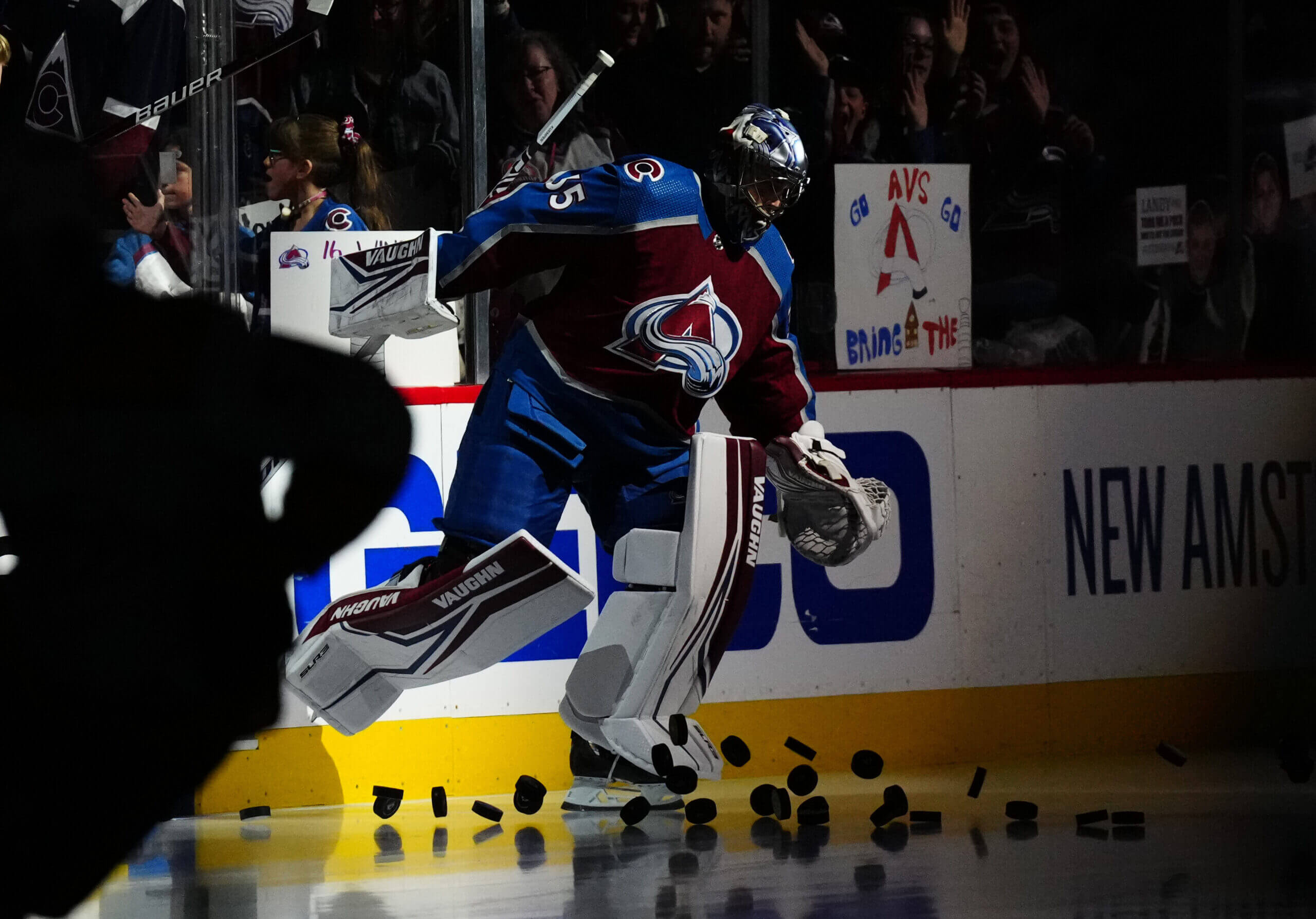 Is there a way for the Blues to slow down the Avalanche?

Scout 2: They can slow the Avs down with forecheck, limiting transition chances and trying to extend play in the Avs’ end with heavy play down low. They will need to do it without penalties.

Scout 3: Take the air out of the tires of their plane maybe? That’s a pretty strong hockey team. I’ll just leave it like that.

Scout 4: In today’s game, the Blues are considered a little bit more of a heavier team, so I think the answer is physicality. But if they try to run around a little bit too much physically, the speed and skating of Colorado could expose them. They still have a good chunk of players on the team from their Cup-winning team. The coach, Craig Berube, is still there. They know what it takes to win. They know what it takes to go on a long run. It’s only been one round, but Ryan O’Reilly had a really nice first round, considering he came off a very average season, points-wise. And you have a couple of these young guys: Jordan Kyrou, who is a really good player. Even on their fourth line — Alexei Toropchenko — they bring some energy. Tyler Bozak is on that fourth line; he’s a veteran who can help those young guys. I think they’re a little more mobile back in the D with Nick Leddy. Justin Faulk moves not too bad compared to Alex Pietrangelo. Obviously, if Torey Krug is out, that’s a hole to fill because he’s a veteran guy who knows how to play in the playoffs.

What’s the most interesting element of the matchup?

Scout 2: The team that has been there versus one trying to make that step. Talent versus pedigree. Also, Kuemper versus Binnington.

What did you think of the Avalanche’s trade deadline?

Scout 3 on Artturi Lehkonen: He was a good player. The Canadiens struggled quite a bit this year, but he was always a positive player, for me, even in their worst of times there, and it seems like he’s taken a nice step since leaving there. Maybe a little higher in the lineup than I thought he’d be, but you saw him at a low where the Canadiens were until their coaching change, so that was nice to see.

Scout 4: With Nico Sturm, I liked him in Minnesota in his role. It’s basically the same role: fourth line, penalty killer. He’s got the size. When you can use guys on the penalty kill who are adequate penalty killers, who can get the job done to minimize putting those heavy minutes on your star players, that really benefits a team. Lehkonen, he seems to fit in there pretty well. Andrew Cogliano, he’s a veteran guy. He’s a guy, whether he’s in the lineup or out of the lineup, he works hard. He hounds the puck. He’s not a big guy, but he’s not afraid to go to the hard areas, and he can provide some energy and be solid on the penalty kill.

Manson, he’s your old-school throwback kind of defenseman if you have him in your third pair — killing penalties, physicality, and he’s pretty simple with the puck. He complements some of the offensive guys, in particular Makar and Girard. Toews is a great two-way guy as well. Manson really added to their depth that they already had.

Scout 1: MacKinnon’s speed — no one skates like him. I think he’s better than Connor McDavid, personally. I just think he makes everyone around him better.

How would you describe Makar in one or two words?

Scout 3: I’ll need two words: Absolutely unbelievable. I was a fan watching him. I wasn’t a working scout. What an unbelievable talent.

Scout 4: There’s multiple words you can use, but he’s a superstar. He has so many adjectives you can use, whether it’s “superstar” or “dynamic.” I don’t want to say a name like Bobby Orr or Paul Coffey, because Cale is going to be one of those types, but the next guy coming, it’s going to be, “He’s like Cale Makar.” He’s going to be special until the day he retires.

Is there a way to slow him down?

Scout 1: He’s such an elite skater. Ryan O’Reilly will hit him, and O’Reilly is so smart, but he can’t keep up with him. Pavel Buchnevich is smart. But no. Cale doesn’t give a shit if he’s hit or not. He’s very elusive. He’s hard to hit. The only guy who could, actually, would be MacKinnon or Landeskog, but they play with him.

Apocalypse now? The alarming effects of the global food crisis

Xavi tells Braithwaite, Puig, Umtiti, and Mingueza they are not in Barcelona’s plans next season

Australia election: conservative government voted out after nearly a decade

Apocalypse now? The alarming effects of the global food crisis

Xavi tells Braithwaite, Puig, Umtiti, and Mingueza they are not in Barcelona’s plans next season

Australia election: conservative government voted out after nearly a decade

Eurovision 2022: can anybody stop Ukraine winning in Turin? – live