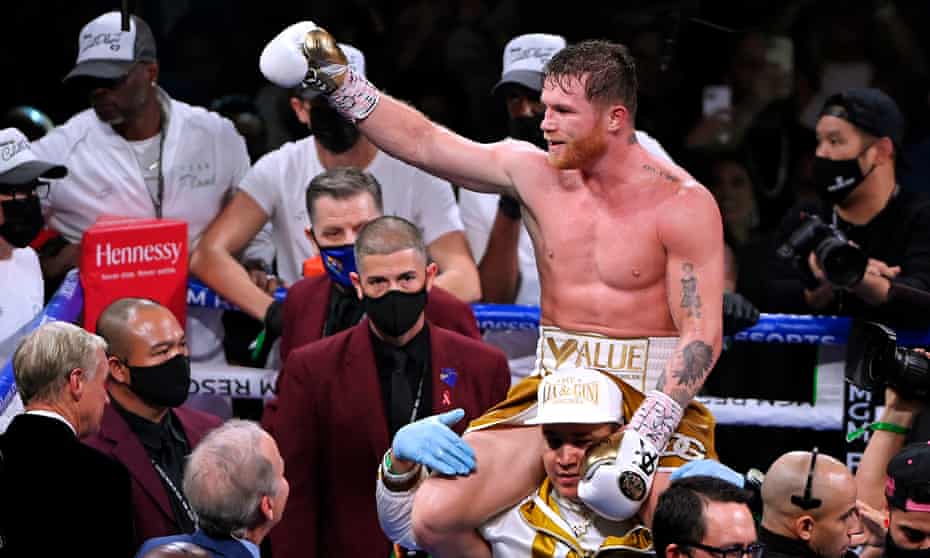 Saúl ‘Canelo’ Álvarez paid tribute to Caleb Plant after he had knocked out the American in the 11th round of their world super-middleweight unification title fight in Las Vegas on Saturday night. Álvarez ended the fight in brutally conclusive fashion but he admitted that Plant had been a difficult opponent who had shown great skill and made the first half of the bout a highly competitive and absorbing contest.

Asked at the post-fight press conference at the MGM Grand in Las Vegas if he had felt frustrated by Plant, who was the busier boxer at the outset and won at least two of the early rounds, the 31-year-old Mexican said: “To be honest with you, yeah. I was a little bit frustrated – especially in the first five rounds. But then the second half of the fight was exactly how we envisaged it. We don’t have to take anything away from Caleb Plant. He’s a great fighter and he made a great effort tonight. But in the end we came out with the win. That’s all that matters really, So even though we had that frustration in the first five rounds the second half of the fight was ideal.”

Álvarez said that his trainer, Eddy Reynoso, whose birthday it was on Saturday, had played a key role in his victory. “Eddy calmed me down whenever I got to my corner and I was feeling a little anxious because the first few rounds were tough,” he said. “He always told me the right thing and kept me on the right path and the game plan came to fruition and, thanks to him, I was able to come out with the win.”

Plant and Álvarez had stoked their personal animosity in a bitter build-up to the fight after, at the first press conference in September, they had traded insults and a few blows. A small cut had opened under Plant’s eye and harsh words were said in the subsequent weeks as they spoke separately to the media. There was sufficient concern that they might become heated again this past week – and so they did not engage in the usual face-off at either the final press conference or after the weigh-in on Friday when they merely taunted each other verbally at a distance.

Late on Saturday night in Las Vegas, while Plant was being examined at the University Medical Center as a precaution, Álvarez spoke warmly of their post-fight embrace in the ring: “He told me afterwards that he wanted to keep fighting and he also wanted to apologise to me and he didn’t mean what he said about my mum. He was truly sorry about that. I told him: ‘Look, it’s OK. It’s water under the bridge.’ I told him he was a great man and also that some day I hope he will have a great family as well. I can only wish the best for him. In the fight we have to hurt each other but, in the end, we’re all human and we want the best for each other.”

Sunday with David Olusoga: ‘I feel this urge to check for major disasters’

Want to change the world? Then you’d better give up on self-defeating pessimism

‘There are a lot of decisions to be made’: Lampard cautious after Everton survive

Adebayo Akinfenwa: ‘I was told I was too big for football and I’ve played for 22 years’

World Cup 2026 host venues: 17 US stadiums in hunt ahead of June reveal