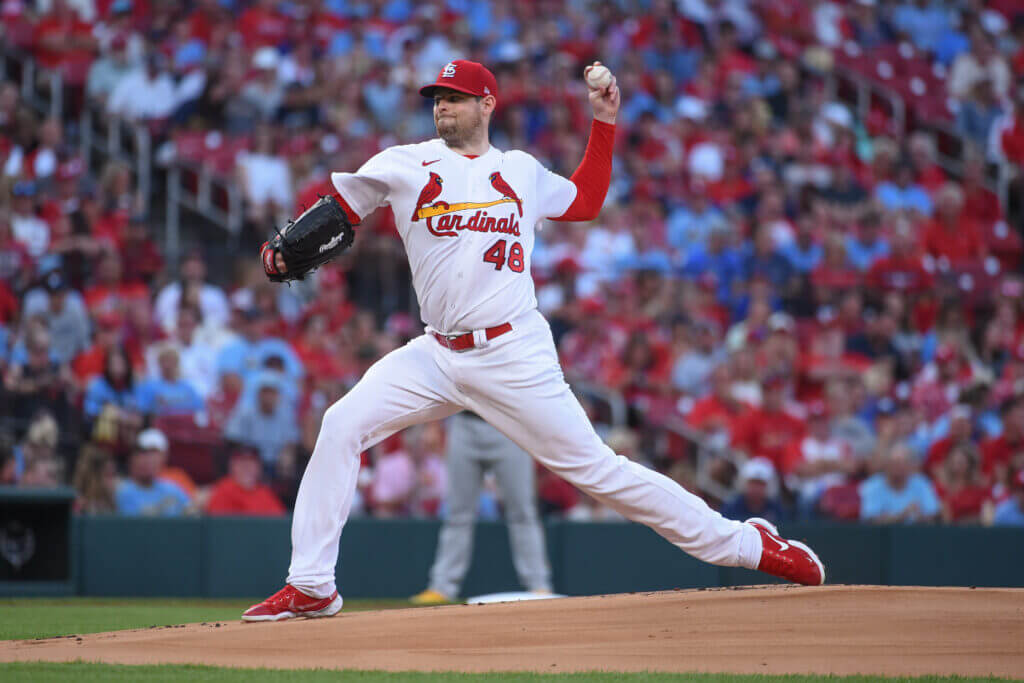 ST. LOUIS — The Cardinals traded for Jordan Montgomery for games like these.

With two outs and a runner on in the top of the sixth Friday in his second start as a Cardinal, Montgomery worked a 2-2 count to Keston Hiura. Fans at Busch Stadium had ascended to their feet. Montgomery paused on the mound before coming set, then gave Yadier Molina a slight nod in preparation for his 108th pitch of the night. Montgomery kicked up his leg, reared back and fired a 94 mph fastball on the black for strike three. His momentum spun him in a circle as he screamed into his glove as he strode off the mound, a yell muffled only by the roar of a sell-out crowd of 45,669.

Backed by six scoreless innings from Montgomery, home runs by Paul Goldschmidt and Nolan Arenado and a two-inning save from All-Star closer Ryan Helsley, the Cardinals charged to a 3-1 victory over Milwaukee, picking up an imperative win in the opener of the three-game set and padding their lead in the division to 1 1/2 games. Since being acquired by the Cardinals from the Yankees at the Aug. 2 deadline, Montgomery has not allowed an earned run. He’s notched 11 scoreless innings while allowing just six hits and three walks and striking out nine.

Jordan Montgomery has done nothing but deal while wearing the Birds on the Bat.

A couple of days after the trade deadline, manager Oli Marmol spoke about the importance of acquiring key players and the instant boost for clubhouse morale.

“The club is sitting there and you’ve identified what’s needed, and then when you go get the pieces, not just get pieces but the right pieces, how they fit personality-wise in that clubhouse and their skill set is going to add a ton of value to what we’re doing,” Marmol said. “We didn’t go get guys just to get guys. We got the right guys.”

That sentiment can certainly be applied to veteran starter José Quintana, who has allowed just three earned runs in his first two Cardinals starts. But Montgomery clearly fits that bill, too. With Jack Flaherty sidelined, the rotation severely lacked an arm that could generate a consistent swing-and-miss rate. In landing Montgomery, the Cardinals added a pitcher with a 29 percent swing-and-miss rate, a chase rate that ranks in the 88th percentile and a whiff percentage in the top quarter of the league. His walk rate (4.9 percent) is even sharper, sitting in the top 10 percent of the sport. Add those components to his ability to induce weak contact (his 48.5 percent ground-ball rate this season is a career high) and the fact that he pitches from the left side, and you have an ideal match for the Cardinals.

For Montgomery – who never expected to be traded – the feeling is mutual.

“They’ve made it easy,” Montgomery said when asked how he’s adapted so quickly to a new clubhouse. “A bunch of just quality hearts, human beings left and right. They’ve made it easy for me to fit in and have gone out of their way to help me feel welcome.”

“He’s under control,” Marmol said. “No panic. He knows that if he executes, we’ll be fine, and he did exactly that.”

Now in his sixth major-league season, Montgomery has always had the pitch mix and makeup to be successful. But he won’t deny the bonus St. Louis brings, and he’s not talking about the stadium dimensions or the elite defense often attributed to benefiting pitchers.

Instead, he’s talking about Molina.

“Confidence,” Montgomery said when asked what Molina adds to his game. “My glove-side heater I really haven’t used my whole career. Coming here and him calling it so often and executing it has given me some confidence in it.”

“The way (Molina) used Monty’s fastball today was impressive,” Marmol said. “He established in with the four-seamer, used the sinker, 12 outs with the fastball, which opened up that changeup. … (Montgomery) being able to use his stuff the way he did, finished guys off with the fastball, froze some guys. It was an impressive outing, for sure.”

Cardinals pitchers often refer to Molina’s presence behind the plate as a calming, assuring reinforcement. Molina is so convicted in his pitch calling that pitchers regularly just opt for whatever he throws down. It’s rare that Molina is shaken off. Montgomery experienced this firsthand in the top of the third inning, when he had the switch-hitting Victor Caratini 0-2 on a sinker and a changeup but shook Molina off in lieu of another changeup. The result was a bloop hit to left field.

“I was like, ‘I’m with you for the rest of the night,’” Montgomery said with a laugh.

Rejuvenated by their rotation reinforcements and the return of their backstop, the Cardinals have won 11 of their past 14 games and nine consecutive home games, allowing them to tie a season high by being 12 games over .500. The difference in the energy, within the clubhouse and in the confines of Busch Stadium, is palpable. In the perspective of Goldschmidt, who slugged his 28th home run of the season via a two-run shot in the first inning off Brewers starter Eric Lauer, the acquisitions of Quintana and Montgomery helped alleviate pressure and concern.

Goldy has left the building! pic.twitter.com/g0Knw6w9JO

“Those guys have done great,” Goldschmidt said. “It’s pretty obvious, we needed a little bit of pitching. We had some guys get injured. (Andre) Pallante had stepped up, amazing for us. He was basically the last guy to make the team and then works his way into being a starter and has done great. But now it’s so valuable to have him in the bullpen. Hopefully, Jack (Flaherty) will be back, and once he gets back, that’ll be great. You know, there’s always injuries, but it was pretty obvious we needed that.”

It’s a bit of a stretch to compare a mid-August showdown to a playoff start, of course, but with the way the division race is heating up — and the entirely plausible possibility that the second-place finisher is edged out of a National League wild-card spot — it’s difficult to deny the importance of these three games.  New York traded Montgomery because it didn’t see him factoring into its playoff rotation. The Cardinals evidently thought otherwise.

Through two starts, Montgomery is doing his best to prove his new organization right.

Why I’m telling my Sikh ‘aunties’: come on in, the water’s lovely