The Cleveland Cavaliers have locked in another core player for the long term.

Darius Garland has agreed to a five-year, $193 million rookie max contract extension with the Cavs, sources confirmed to The Athletic. The deal could be worth up to as much as $231 million with escalators. It’s the richest deal in Cavs history.

This was an important item for Cleveland to check off its offseason to-do list. By securing the deal now, Garland, 22, enters next season with the extension out of the way. The deal does not kick in until the 2023-24 season, when the money goes on Cleveland’s books.

Garland took major steps forward during the 2021-22 season, averaging 21.7 points and shooting 46.2 percent from the field and 38.3 percent on 3-point attempts. He averaged 8.6 assists and 3.3 rebounds. His success helped ignite Cleveland’s overall progress. The Cavs doubled their win total from 2020-21, going from 22 to 44, and reached the Play-In round after three consecutive seasons out of the playoffs.

Aside from his on-court production, Garland also found his voice as a leader for the Cavs. Coach J.B. Bickerstaff handed the keys to the team to Garland, and the franchise wanted him to lead. He did just that. He facilitated for his teammates, finding Jarrett Allen or Evan Mobley for lobs or Isaac Okoro and Lauri Markkanen for dunks as they cut to the basket. He absorbed intel from veterans such as Ricky Rubio, pairing with him at times to form a dynamic backcourt that forced defenses to choose whom to guard. He learned how to balance creating shots for others while also finding his own shots.

For Garland, one of his biggest areas of growth was confidence. It went back to his time with the Select Team and his call-up to Team USA last summer, when he was surrounded by players who helped him blossom, he said. 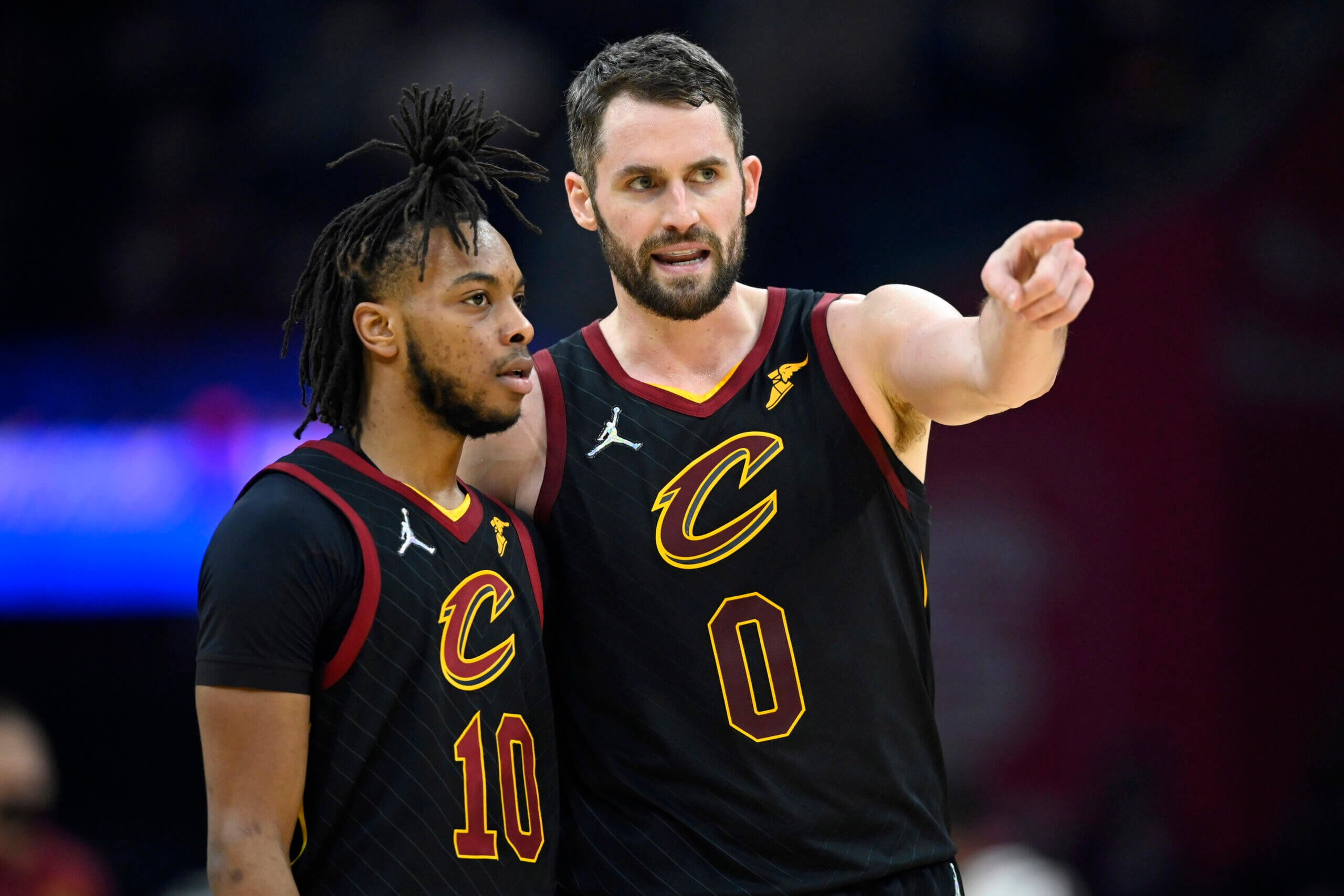 Kevin Love, right, was one of the Cavs veterans who helped with Darius Garland’s emergence in 2021-22. (David Richard / USA Today)

Garland continued to work with assistant coach J.J. Outlaw throughout the season, along with Kevin Love, in what the trio called “flight school,” where they worked on the arc and lift of shots on the perimeter. Garland would warm up before games with Outlaw, taking shots from different spots on the floor. Over his first three seasons, Garland has built a relationship with Outlaw that has had a huge impact on his game and his mindset.

“He’s meant a lot to me,” Garland told The Athletic in March after a shootaround in Miami. “I mean, he’s been through the downs when I first got here, and he’s been through the highs of this year. So he’s seen it all. He’s seen the growth and seen the process. He’s been in the growth and in the process. So just having him around, just having somebody like that, that trustworthy guy, it means a lot to me.

“I talk to him about everything. He’s like a big brother to me. I’m with him every day, so the bond is going to keep growing, keep getting better. And one thing I love about him is that he tells me when I’m wrong. He tells me I’m doing something wrong and when I’m having a bad night or something like that, just try to get me going, just lift me up a little bit. I love that about him; he’s always true.”

Garland’s success last season earned him an All-Star nod, and he represented Cleveland during the skills challenge. The individual accolades, along with the team’s leap forward, led to the contract extension. The Cavs are banking on his confidence and skill to continue pushing his and the team’s success.

“All-time high,” Garland said of his confidence after that March shootaround in Miami. “The highest it’s ever been in my life, to be honest with you. All-Star night, it gave me even more confidence just being a part of that, just being named one of the top 24 guys to play basketball right now. Just being honored and that respect around the league from your peers, it means a lot to me. I’ve been working for that, and for it to come this early, it’s super cool.”

The Cavs drafted Garland No. 5 in the 2019 draft. He had played just five games at Vanderbilt before he tore his left meniscus injury. As for most rookies, his first season was one of adjustment. But in the subsequent two seasons, he has developed into one of the league’s top point guards.

Now he’s being paid like one. The extension, along with one given to Allen last summer and the promise shown by Mobley, demonstrates what the Cavs believe they have in their young core.