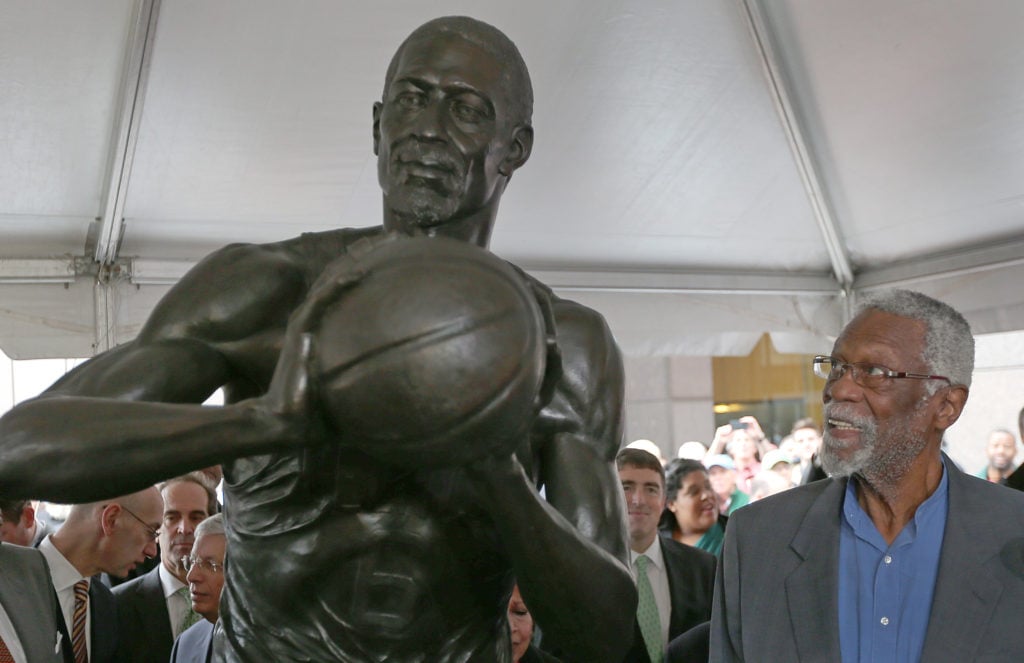 On the most memorable days, as a sports writer, I feel like I don’t belong. I share a room with legends, some of the top athletes of all time, idols to generations of people. I look around and see fame. I see greatness. I see genius. And I question why anybody let me walk through the door.

As Kenny Smith described Bill Russell’s statue unveiling in Boston in 2013, it was like watching all your trading cards walking around the room. Julius Erving showed up. So did Charles Barkley. Bill Walton flew into town. JoJo White, Tommy Heinsohn, Jim Brown, Alonzo Mourning, Clyde Drexler and a long list of former NBA players did, too. Bill Withers and Johnny Mathis — both still cooler than a Gatorade bath — put on a joint performance. President Barack Obama got a sneak peek of the statue before it was officially released to the public.

And the statue still stands as a testament to Russell, who passed away peacefully at age 88 on July 31.

Back in 2013, Russell did not even necessarily want the celebration. That’s part of what separated him, right? He never cared about individual accolades. He wanted to beat somebody. He wanted to stand up for what was right. He wanted his team to win. Several people at his statue unveiling suggested he only accepted the honor because the Celtics helped fund a mentoring program Russell loved. He let himself be adored because he wanted the youth to benefit. Otherwise, he never would have invited the pomp and circumstance. Several times that day, Russell said he was actually “embarrassed” by the statue.

Embarrassed? Please. It should have happened years — no, decades — before it did. Russell won an Olympic gold medal. He won two NCAA championships. He won so many NBA titles that, years later, Wilt Chamberlain called himself jealous of the 11 trophies. Chamberlain did not capture his first NBA ring until 1967, his eighth season in the league. Before then, he heard all the taunts about being a loser, as if he were the only one incapable of overcoming Russell’s Celtics.

“If I’m a loser,” Chamberlain said, “then damn near everybody else who was playing was a loser.”

Russell’s Celtics did not let anyone else have a turn. More than 50 years after he played his final game, one can debate where the center stands on the list of NBA greats. He wasn’t as physically imposing as Shaquille O’Neal or as dominant a scorer as Chamberlain. He didn’t have Hakeem Olajuwon’s dream shake or Kareem Abdul-Jabaar’s sky hook. He didn’t play in today’s era, with guards who can let it fly from 35 feet and big men who can’t always keep up. In an argument with your friend, uncle or cousin, you might hear reasons why Russell would fail to thrive the same way in today’s game. So much about the NBA has changed since the days he owned it.

This truth cannot be debated: Russell and the Celtics owned the NBA like no other team ever has or ever will. He cared only about winning and he did it better than anyone – in any team sport – ever has. He encountered 10 Game 7s and left each one with a victory. How improbable is that? The likelihood of flipping a coin the same way 10 times in a row is 0.098 percent. Russell’s teams were literally the NBA’s 1 percent. He has as many rings as Michael Jordan and Magic Johnson combined. He won eight straight championships during one stretch.

“I was in great company as a loser,” Chamberlain said.

Because Russell vanquished everyone. Where does he rank among the greats? Way up near the top. His insights on defense were fascinating – and always will be. He once said that while he could only block shots five percent of the time, what made him so effective was that opponents didn’t know which five percent it would be. When he opened up a bit about his craft, he spoke of basketball like a professor of the game. Defense was his science. It was his art. It was what he knew better than anyone at the time and maybe anyone since. If he was back by himself guarding a 3-on-1 fast break, he aimed to instill some sort of worry into all three of his opponents. He set out not to block shots, but to warp his opponents’ ideas.

“Basketball is a game that involves a great deal of psychology,” Russell once told Sports Illustrated. “The psychology in defense is not blocking a shot or stealing a pass or getting the ball away. The psychology is to make the offensive team deviate from their normal habits.”

Though some strides have been made recently, the basketball community has long overlooked the value of defense. Players who can put the ball through the hoop earn the biggest paychecks, receive the most All-Star nods and often land reputations that outweigh their actual contributions. Even in that landscape – even back in the 1950s and 1960s – Russell was great enough for everyone to recognize the importance of defense and rebounding.

During the era in which Chamberlain smashed so many records, Russell won five MVP trophies without ever averaging more than 18.9 points per game. While his Boston teams were loaded with Hall of Famers, his mere presence effectively guaranteed those clubs a top defense annually. Though defensive ratings before the 1970s involve some estimated statistics, Russell’s Celtics led the NBA during 12 of his 13 seasons. They did not have a top-four defense either before he arrived or directly after, but sat on the throne essentially his entire NBA career. Russell broke the paradigm with defense so eye-popping, soul-crushing and unique that nobody could ignore it. He pried open the eyes of a basketball world that is almost always blind to the full value of everything he did best.

So the Celtics — though they were many years late — eventually built him a statue. At the unveiling, Russell tried his best to downplay his individual accomplishments. He preferred caring about more important matters, a wide variety of topics that he believed included winning basketball, civil rights activism and almost everything else.

“Two things about statues,” Russell quipped. “First, they remind me of tombstones. And second, they’re something for pigeons to crap on.”

Third, they can make an excuse for one heck of a party. Russell may not have wanted to celebrate himself at the unveiling, but a long list of legends showed up to celebrate him. At the event, I wondered to myself how many NBA figures of the past or present could have inspired such a guest list. In Boston. In November. On a cold, rainy day.

Not many. Not many at all. But Russell never left an impact like everyone else.

The Guardian view on housing costs: a grave and growing injustice

If we allow Covid to overwhelm Australia’s health system, medical care will suffer