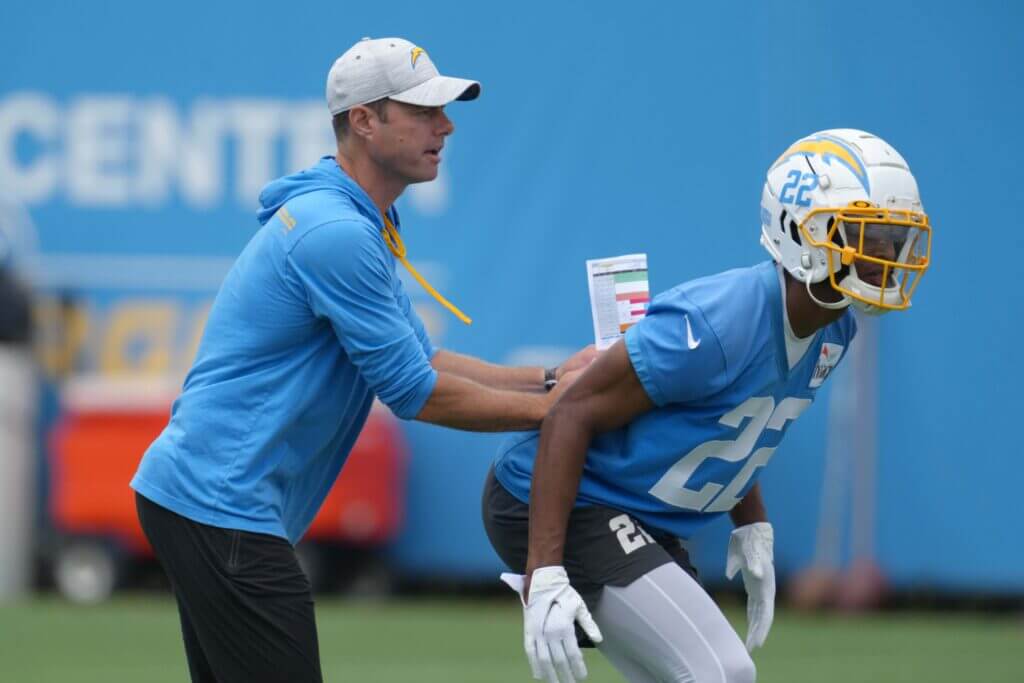 Here are my observations, notes and takeaways.

The Chargers voiced considerable excitement in April after they drafted Woods in the third round out of Baylor. They felt like Woods’ speed and range would be a crucial addition to their defense, allowing Derwin James to move around more — to the slot and other alignments closer to the line of scrimmage — without sacrificing their coverage capacity in the deep part of the field.

That vision has not changed.

Woods, though, has hit some speed bumps in his first NFL training camp. And let’s get this out of the way now: That is understandable. All rookies deal with some inevitable ups and downs as they transition into the NFL. Staley’s scheme is particularly complex and layered, especially for safeties. And the Chargers are not holding anything back from Woods from a mental standpoint.

“We kind of threw a lot at him,” defensive coordinator Renaldo Hill said after practice Friday.

Still, Woods is playing hesitantly, and, as a result, we have not yet seen his 4.3 speed and ball skills really come to life on the field in team drills. Woods, who tied for the FBS lead in interceptions last season with six, has been slow to both diagnose routes and rotate in the deep part of the field, and Hill attributes that to some overthinking.

In Friday’s practice, Woods lost track of Jalen Guyton on a deep corner route in 7-on-7. Guyton came wide open near the left sideline, and Easton Stick hit him for a 35-yard gain.

“You can see sometimes in his rotational things where there’s a little pause there,” Hill said of Woods.

Later, Woods was playing on the second-team defense facing Justin Herbert and the first-team offense in the two-minute-drill period. Woods was matched up in man coverage on tight end Donald Parham, with the offense at the opposing 25-yard line. Parham ran a seam route, beating Woods off the line of scrimmage, and Herbert hit him for the touchdown. Woods allowed Parham to get too clean of a release, and Parham then used his speed and size to win down the field.

“We just got to get him to keep getting out of that slower play so he can play fast and can play with that 4.3 that we’ve seen in the past,” Hill said of Woods.

He added: “We know he’s special at getting the ball in the back end. Right now, it’s just really, how much can we get him on the grass and continue to get him playing at that fast pace?”

With James sitting out because of his contract negotiations, there was an opportunity for Woods to work in with the first team and claim that third safety spot early in camp. But Alohi Gilman has gotten nearly all the reps as the second first-team safety next to Nasir Adderley. Undrafted rookie Raheem Layne has worked with the first team more than Woods.

It is still very early. And Hill believes that Woods will be able to play faster and more confidently when they can narrow down the focus of his responsibilities in team-specific game plans during the season.

“The biggest thing is just continuing to get the one-on-ones with him, him getting upstairs with (assistant DBs) coach (Tommy) Donatell and hammering those things that he needs help with,” Hill said. “But right now, we want to throw as much as we can at him just to get him exposed to those things that we do. And then once the game plan comes down, we’ll be able to shrink it. But it’s a lot of time in between here and the game, so we’re just going to keep hammering at him, and we know he’ll come around.”

The Chargers had four team-drill periods Friday — one 7-on-7, two 11-on-11 move-the-ball and one two-minute drill.

• Bryce Callahan nearly intercepted Herbert in 7-on-7. He jumped a throw intended for Keenen Allen over the middle. Asante Samuel Jr. had the primary coverage and was all over Allen. Callahan was roving underneath and read Herbert’s eyes. Callahan is having an outstanding camp. He seems to have the slot corner position in the nickel defense locked up. “That’s home for Bryce,” Hill said of Callahan playing in the slot. “He’s done it since he came into the national football league. He also has a great ability to play outside. But we know his strong suit is playing inside. He’s calm in there. He’s seen a lot. And he has the quickness and speed to guard pretty much anybody that goes in that slot.”

• Rookie Otito Ogbonnia was one of the three interior defensive linemen with the first-team base defense, playing alongside Sebastian Joseph-Day and Austin Johnson. On the second rep of 11-on-11, Ogbonnia batted a Herbert pass down at the line of scrimmage. Herbert was attempting to check down to Larry Rountree off play action.

• Troy Reeder, Nick Niemann and Amen Ogbongbemiga rotated as the inside linebackers with the first-team defense.

Close up look at the ILBs working with position coach Michael Wilhoite pic.twitter.com/OQLCO64jV6

• Allen had two third-down receptions from Herbert in the second 11-on-11 period, including an explosive play on a crosser on the second-to-last rep of the period.

• Defensive lineman Andrew Brown sacked Chase Daniel while facing the third-team defense. Brown, who the Chargers signed to their practice squad in October last year, is really flashing both as a pass rusher and run defender in camp.

• Herbert engineered a crisp two-minute drive facing the second-team defense. There were 58 seconds left and the offense started at its own 40-yard line, needing a field goal to tie. Herbert connected three times with Allen, including a great ball on a seam route to move the offense to the opposing 25-yard line. That set up the touchdown to Parham.

• Stick led the second-team offense in the same two-minute situation against the first-team defense. He completed his first two balls, both to Parham, before the drive stalled. Joseph-Day batted a pass down on first down. Then Callahan had a pass breakup on second down while in coverage on Michael Bandy. On third down, Stick attempted a dangerous throw over the middle to Trevon Bradford. The ball was tipped, and J.C. Jackson came down with his first interception of camp.

• LB Drue Tranquill, TE Tre’ McKitty, LB Kyle Van Noy, S Mark Webb, and WR Jason Moore sat out practice. Tranquill has missed the past five practices with a groin strain. Moore, McKitty and Webb are dealing with unspecified soft-tissue issues. We will get an update on Van Noy when we talk to Staley next Sunday, if he is still not practicing.

• Edge rushers Joey Bosa and Khalil Mack did not participate in team drills. Just rest days, according to Hill: “We got a big ramp up with the pads coming on, so we wanted to make sure those guys are ready to go for those practices coming up.”

• With Bosa and Mack resting the last two practices during team drills, Chris Rumph II and Emeke Egbule have been working in with the first-team defense at edge rusher. Hill has been impressed with Rumph, a fourth-round pick in 2021 who added some mass this offseason. “Chris has been doing a great job,” Hill said. “I feel the weight on him right now. I feel when he goes to a power rush move that it’s on display a little bit more. Last year, if he went to that move, they probably would have grabbed him up and we wouldn’t have gotten any push in the pocket. But he’s doing a good job. You can tell he’s really been working on his pass rush game. He’s really got some good setups that are working.”

• After missing four of his nine field goal attempts in Tuesday’s practice, kicker Dustin Hopkins was perfect Friday. He made all nine of his kicks, including an extra point to cap off the first-team offense’s two-minute drill.

• Davis was working in as the sixth defensive back in dime packages. He also got reps as one of the two outside corners in the first-team base defense opposite Jackson. “We don’t know how these packages are going to shake out, and we want to continue to create depth and competition,” Hill said. “We know Mike is a talented guy, and we got to find ways to get guys on the field in different packages. He did slide inside on some dime today, and we’re just going to keep it going. We’re going to see how this thing develops, and I think the more and more we find out (about) where their comfort level is at on the practice field, it will determine how we approach our game-planning.”

Thomas Tuchel on why no Chelsea player has taken No 9 shirt: ‘It’s cursed’