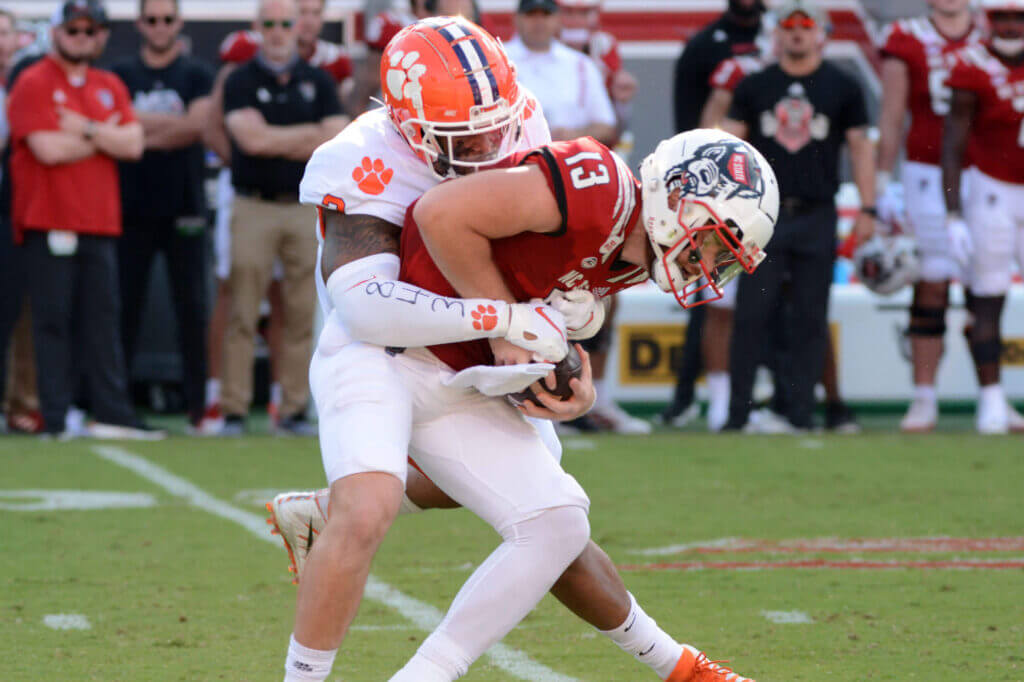 CLEMSON, S.C. — Clemson defensive coordinator Wes Goodwin took a couple of beach vacations with his family this summer. First, he went to Hawaii with his wife and daughters for two weeks, where the family bounced around three different islands and spent six days with Goodwin’s in-laws. Then they took off for Gulf Shores, Ala., where they spent time with his side of the family for four days.

Goodwin, 37, said last month that he typically doesn’t have much trouble separating work and play and is able to leave Clemson football matters at the office when he goes home at night.

“Sitting on the beach on vacation, I’m ready to get back. Get to work. There’s only one first time,” Goodwin said of making his debut as Clemson’s permanent defensive coordinator next month when the Tigers open with Georgia Tech.

“Obviously this being the first year of being a coordinator, (I have) a lot of excitement. Waking up at 4 a.m., a lot of things running through your mind and stuff. Just all that excitement building. I’m ready to get going.”

Goodwin certainly has plenty to be excited about.

Clemson produced a top-10 defense in seven of the past eight seasons under former coordinator Brent Venables, and Goodwin has all the pieces he needs to pick up right where Venables left off. The line should be among the nation’s best. The linebackers have more athleticism than Goodwin has ever seen at Clemson. And the secondary is green but flashy. How Goodwin fares as a play caller remains to be seen, but the personnel is in place.

No one expected Thomas to still be at Clemson in 2022 when he signed with the Tigers in 2018 as the nation’s No. 3 prospect. But it took the Florence, S.C., native a few years to mature at the collegiate level after he broke out as a freshman but regressed as a sophomore. Then he contracted consecutive cases of COVID-19 and strep throat in the summer of 2020 and gained about 25 pounds in the process. Thomas played in seven games in 2020, and he earned third-team All-ACC honors in 2021. He’s now utilizing his extra year of eligibility to prove he still has first-round NFL Draft talent.

“Anytime you can get a chance to get Xavier Thomas back, that’s a big deal,” defensive ends coach Lemanski Hall said. “He’s eager to prove a lot of people wrong.”

Joining Thomas as a fellow projected starter will be Murphy, a former top-10 overall recruit who has already played 963 snaps with 16 starts in his first two years with the program. Henry, yet another five-star prospect, and Mascoll will provide quality depth.

“This is our final ride together,” Hall said of the veteran experience at the position. “Now we get a chance to hopefully go out and play at a high level, be productive on the field (and) live out the dreams that they want as players. I think they have that opportunity.”

Similar to defensive end, there is no shortage of depth at defensive tackle. Bresee, the nation’s top recruit in the Class of 2020, is back from an ACL tear suffered in September. Davis is entering his fourth season as a starter. And because of Bresee’s injuries, Orhorhoro started nine games in 2021.

Throw in Page, Williams, Reuben and Capehart, and defensive tackles coach Nick Eason has all sorts of flexibility to rotate players. It’s no secret that Clemson’s strength — on either side of the ball — is the D-line.

“We’re very talented. I think that the great teams that I’ve been a part of and I’ve played with always had depth,” Eason said. “And I think we have some of the best depth in the country. Everybody in the room can play.”

Simpson and Carter watched how Clemson used former do-it-all-linebacker Isaiah Simmons in 2019 when the former three-star recruit became the program’s first Butkus Award winner. The Tigers took advantage of Simmons’ size, speed and extraordinary athleticism to make him one of the most versatile defenders in college football at that time.

Simpson and Carter have similar makeups — and now they’ll be on the field at the same time.

Clemson is moving Simpson from the sam/nickel position he played in 2021 to the will linebacker spot, for the sake of Simpson’s professional future and so that the Tigers can get him and Carter on the field together.

Simpson finished third on the team with 78 tackles and second in tackles for loss (12) and sacks (six).

Mike linebacker is more up for grabs and will likely feature a competition between Bentley and Maguire. But Goodwin can rest easy knowing Simpson and Carter are ready to run the show.

“He’s a freaky athlete for sure — 6–foot-3, 235 pounds,” Goodwin said of Simpson. “He can cover like a safety but he can blitz like a D-end. Just having him, being able to move him around in different spots and utilize what he does best will be really fun.”

The bad news for Clemson at cornerback is that the Tigers lost their starters from 2021 in Andrew Booth Jr. and Mario Goodrich. Both are off to the NFL after becoming the first duo from the same school to sweep first-team All-ACC cornerback honors since 1997. The good news? The coach who developed them — cornerbacks coach Mike Reed — is back for his 10th season on staff. And he’s got the type of talent that will keep Clemson competitive on the back end.

Jones is expected to be the next alpha of the group as a senior who has played 855 career snaps in 38 games with 11 starts. Wiggins, a sophomore, has the type of speed, his teammates say, that puts him in the conversation with running back Will Shipley as a candidate for the fastest player on the team.

Although Greene could play more nickel, he and Davis are still juniors

with plenty of experience in the system. Then there’s Lukus and Pride, highly touted true freshmen. Lukus, a five-star prospect in the Class of 2022, is the second-highest-ranked cornerback recruit in Clemson history, only behind Booth. His spring was cut short because of a lingering shoulder injury, but he’s expected to be ready for the season. As for Pride, Reed said the East St. Louis, Ill., native is one of the most physically ready freshman corners he has seen.

“It’s like a kid running downstairs on Christmas,” Reed said of getting a look at his corners on the first day of camp Friday. “You want to see what’s in the presents.”

Former Clemson safety Lannden Zanders announced this week that he is stepping away from football after sustaining three shoulder injuries in the past year. Zanders would have brought speed and experience to the position, but the Tigers are in good hands with Mukuba, Phillips and Mickens.

Mukuba, who could also play cornerback if necessary, was the breakout star of the defense in 2021. Known for his physicality, he earned ACC Defensive Rookie of the Year honors and started more games (10) in the secondary last season than any Clemson true freshman in the modern era. Phillips and Mickens both played 330-plus snaps last season while Venables, who chose to stay at Clemson instead of following his father to Oklahoma, played 262.

Covil is green but has Mukuba-esque traits when it comes to his physicality. He has also impressed in coverage, safeties coach and co-defensive coordinator Mickey Conn said.

“He’s got the physical abilities,” Conn said. “The mental part of it, he’s still got a lot to learn back there. But he’s a great cover guy. And he can hit.”

Starters: Will Shipley and Kobe Pace

Potter was a senior in 2021 but opted to utilize his extra season of eligibility. During a year in which Clemson’s offense struggled, Potter shined — hitting 80.8 percent of his field goals and earning second-team All-ACC honors. He also spent part of the spring competing against Swanson for the starting punting job as the Tigers seek a replacement for Will Spiers.

As for the rest of special teams, Clemson is in good shape — particularly when it comes to the return specialists. Taylor was the team’s starting punt returner early in the season before he tore his ACL. Now he’s back and will rejoin the football team for preseason camp after missing spring practice to suit up for the baseball team.

“I’m excited to get back on the field with Will,” Clemson coach Dabo Swinney said. “I can’t wait to get on the field and get back to work with him.”