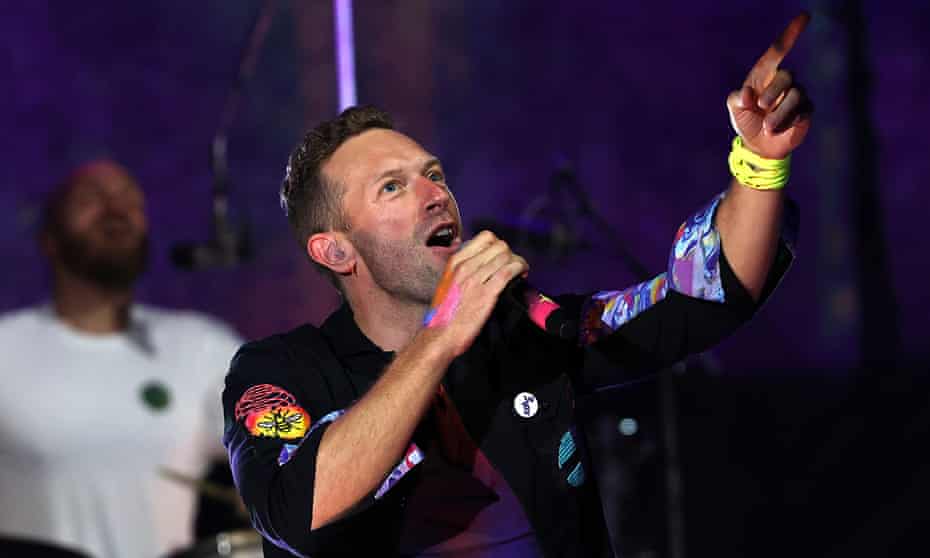 Shepherd’s Bush Empire, London
Chris Martin and co bring out the big guns, and pack an arena-sized show into an intimate theatre, to mark the launch of teen-pop new album Music of the Spheres

The promotion of Coldplay’s forthcoming album offers a study in contrasts with that of its predecessor. The experimental double album Everyday Life, from 2019, was announced with typewritten messages sent to fans and classified ads placed in local newspapers. Its showcase gig featured the album played in its entirety, in Jordan, without an audience. Its follow-up, however, features K-pop boyband BTS and Selena Gomez among its supporting cast (collaborators, Chris Martin appears to suggest from the stage tonight, who were suggested by actor Simon Pegg’s 12-year-old daughter) and was produced by Max Martin, the most celebrated of pop’s shadowy super-producers and the co-author of 25 US No 1 singles. Its arrival was heralded by the band literally sending their music into space: lead single Higher Power received its premiere beamed from the International Space Station. The showcase gigs, meanwhile, have taken place in New York, Paris, Berlin and London – albeit at venues that are doubtless smaller than the backstage areas of the kind of enormodomes the band have long called home.

When a band as big as Coldplay perform a relatively intimate show, they have two basic options. One is to strip things down to their understated essence and allow the audience a rare glimpse into the artist au naturel. You get the sense, even before you get inside the auditorium, that this is probably not the path that Coldplay have chosen to take: there are attendants in the lobby handing out the flashing wristbands Chris Martin and co use to create impressive lighting effects in vast crowds. And so it proves: Coldplay appear to have crammed their entire arena production into a 2,000-capacity theatre. There are projections not just on the stage but all over the inside of the venue. There are confetti cannons and a surfeit of lasers. The keys on Chris Martin’s piano light up as he plays, while the singer’s extravagant stage movements are visibly designed to reach Row ZZ of the Quicken Loans Arena, Cleveland. The gig’s idea of restraint involves waiting until song three to bring out one of the biggest pop stars in the world: Ed Sheeran, who duets on Fix You, returning later to play three of his own songs (“Some actual big hits,” smiles Martin).

The setlist is similarly constructed: there are five songs from the forthcoming album, but its main business is clobbering you into submission. Everything else they play is a single that achieved such ubiquity you’d immediately recognise it even if you had spent the last 20 years going out of your way to avoid Coldplay: Clocks, Viva La Vida, Paradise, Yellow. It’s a bullish reminder of how Coldplay got, and then stayed, huge. For all the accusations of beige-ness hurled their way, they’ve subtly but deftly navigated changing fashions – although you occasionally wonder at the cost.

If you thought their early Noughties releases dealt in windy generalities, they sound almost painfully acute and incisive next to the later stuff. Certainly The Scientist has a genuine emotional heft that the diet-EDM of A Sky Full of Stars, or Music of the Spheres’ Auto-Tune-assisted Human Heart (which tonight comes with a guest vocal from Fleur East) do not. In fact, you find yourself wondering if Music of the Spheres’ land-grab for a teen pop audience will work: Coldplay’s history suggests it will – but in its own way it’s far more risky than its predecessor’s dabblings in global music. When Chris Martin, a reassuringly self-deprecating presence between songs, introduces the new album’s 10-minute long closer Coloratura, it’s with the suggestion that the audience might want to leave: “You’ll be forced to ingest one of the biggest slices of soft rock you’ve ever heard.”

The success of Music of the Spheres remains to be seen. But in the moment, it’s hard not to give yourself over to the audiovisual bombardment, which suggests Coldplay’s future is sealed whether or not the new album does the trick commercially: they could do this and pack out the enormodomes for the rest of their lives.