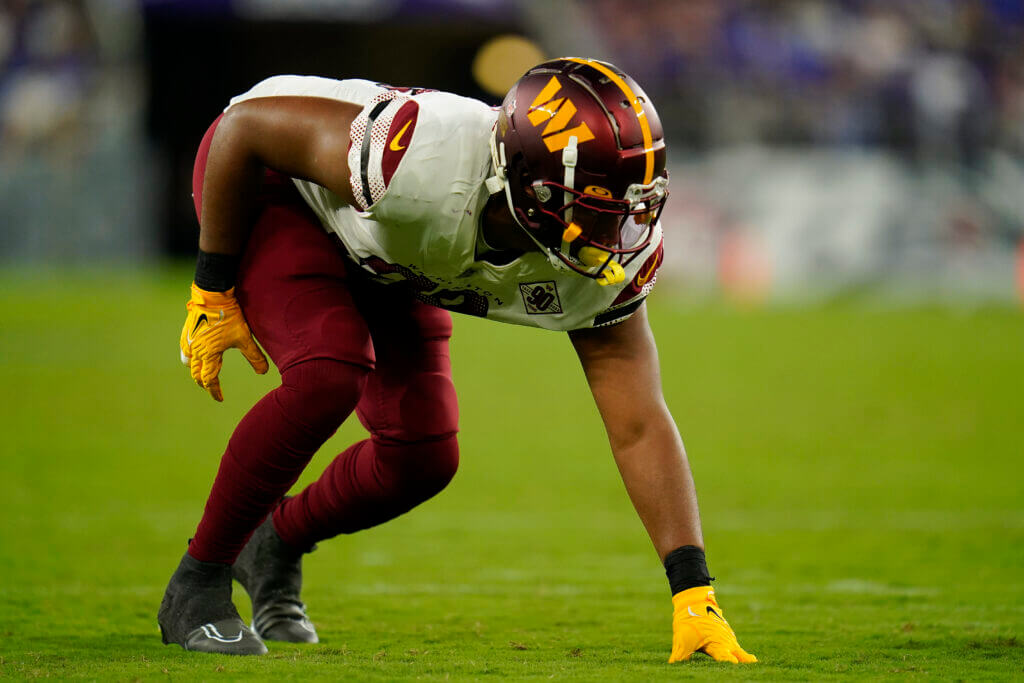 With most starters watching, the Commanders fell 17-15 on Saturday night as the Baltimore Ravens extended their bizarre preseason winning streak to 23 games. Rookie quarterback Sam Howell started and impressed, even though a potential game-winning drive fell short. Washington ended the preseason 0-3.

Much, much more importantly, Washington’s decision-makers received one final game tape to consider before trimming the roster from 80 players to 53 by Tuesday’s 4 p.m. deadline. Head coach Ron Rivera estimated “four to seven” spots were up for grabs entering the preseason finale.

“Whether it’s the last or second to last guy at a position, we felt there were pretty good battles going on,” Rivera said.

While I maintain the right to change a choice or two ahead of Tuesday’s deadline, here’s my final 53.

Commanders fans received a realistic look at Howell’s final college season as he ran for his life — and ran for yards against Baltimore. The fifth-round pick completed 24 of 35 passes for 280 yards. His 13-yard touchdown toss to running back Reggie Bonnafon with 5:31 remaining pulled Washington within two, and his two-point conversion attempt to wide receiver Matt Cole was catchable.

Howell flashed his mobility and toughness in and outside of the pocket. He rushed for 62 yards on eight carries while absorbing five sacks and 12 QB hits.

“(Howell) was exciting to watch and made some good decisions,” Rivera said.

Heinicke is unequivocally the primary backup. Let’s see if that’s the case, should there be a reason to use another QB during the second half of the season.

Washington is stacked at this position, but Williams ran hard throughout training camp, and his improved speed impressed the coaches. He also missed recent practices with an undisclosed injury. Perhaps the Commanders keep him on the initial 53 and then place him on IR so they can add help for the back-7 defense?

The backfield hierarchy change was perhaps the top story in camp. Robinson taking over as the early-down back at some point seemed plausible if not likely. Week 1 is earlier than anyone imagined, but it’s likely happening with Gibson shifting into a pass-catching role with kick returner duties.

Milne is making the team and, therefore, will handle punt return duties. Brown is also sticking despite an inconsistent summer which included two drops against Baltimore. Expect the 2021 third-round pick with speed to be inactive for games unless injuries or the unforeseen occur. Samuel practiced extensively over the final two to three weeks of camp and looks poised for a good season after his injury-ravaged 2021 campaign.

Rogers warrants some award for being the only tight end on the roster to remain available throughout the summer. Guess the former college QB will be happy with a roster spot — unless Blanton, who had five receptions in the 2021 NFC Championship game for the Rams, snags it.

Washington kept four initially last season without a bevy of injuries, so the same projection this year, especially with Bates (calf) and Turner (hamstring) sidelined and Thomas yet to practice fully. Rivera said on the radio postgame show that he anticipates Bates returning to practice this week.

Nine is the number, but injuries at the interior spots could alter the plan. At least Norwell and Schweitzer returned to practice this week, and Turner (quad) participated in unit drills for his first work of any kind since July. Paul, a 2022 seventh-round pick, beats out Ismael for the final spot and perhaps by a fair amount in the end. Ismael, who did not make the final cut last year, missed the final two days of practice with an undisclosed injury.

Really fun debate with Toney and Bradley-King. After going with Bradley-King in the prior 53-player projection, I flipped to Toney, who Rivera cited as a pass-rush specialist in camp. These two second-year players/lottery tickets offer speed off the edge, and Chase Young landing on the PUP perhaps allows Washington to keep 10. Hamilton is part of the final pondering should Washington seek more size or if there is any lingering concern with Mathis’ leg injury.

Regardless, Washington must replace Young for at least four games. Smith-Williams gets the call with the starters, but the coaches will mix and match from there with Bradley-King on the practice squad.

That’s right, four linebackers, and I debated keeping three for now. There are better players at other positions. Hudson can help on special teams but has not improved on defense nor emerged as a “Buffalo” nickel candidate. Eifler, added to the roster late in 2021, played ahead of Hudson on Saturday.

I was this close to leaving off Eifler for Jonathan Williams. Regardless, the idea is Washington would add one or two more before Week 1, perhaps from this group of cuts, after possibly placing others on in-season IR. Of course, we’ve waited for substantial additions all offseason. Nothing happened other than signing Nathan Gerry, who then was released off injured reserve.

Davis played the first two defensive series and swallowed up Ravens RB Mike Davis for a 1-yard loss on Baltimore’s second offensive snap. Rivera said using the 2021 first-round pick was a late decision, but one he felt would help provide Davis with more reps and help his defense make it through four quarters with limited personnel (the same rationale for Smith-Williams and St-Juste).

Like linebacker, we’ve been wondering if Washington would add needed depth. Despite some positive moments in camp from Johnson, Elder and Holmes, the need is arguably more prevalent than at the start of camp.

Teams picked on Johnson earlier in the preseason, and then he and safety Percy Butler were fooled on a double-move by Ravens WR Demarcus Robinson, resulting in a 67-yard touchdown catch. Elder joined the roster late in 2021. Relying on the journeyman and Holmes, a 2022 seventh-round selection, seems dubious. Viable cornerbacks aren’t typically made available, but the Commanders should be on the lookout.

Six safeties are more than expected. Concerns at CB played a factor, but so did strong play from Reaves and Parker during the preseason. That Curl, McCain and Butler can handle the slot mean Washington can use three safeties often. Reaves arrived in Washington in 2018 but has yet to make the initial 53. That changes this time.

Jeremy Reaves told me after the first preseason game that he feels different on the field this season. More confidence. That remains the case ahead of Tuesday’s cut. Said postgame that he believes he’s made a “jump.” Said he’ll now spend time before cuts prepping for the Jax.

Slye made field goals of 44, 24, and 29 yards after missing his first attempt from 43. That’s after missing an extra point in the opener against Carolina. Rivera postgame said the Slye “gets so frickin excited” for his first kick each game before settling in. Something to monitor down the line, but not now.

At 33, I have nothing to show for my life. I want to feel alive

‘People are much angrier now’: why Britain is going on strike | Industrial action