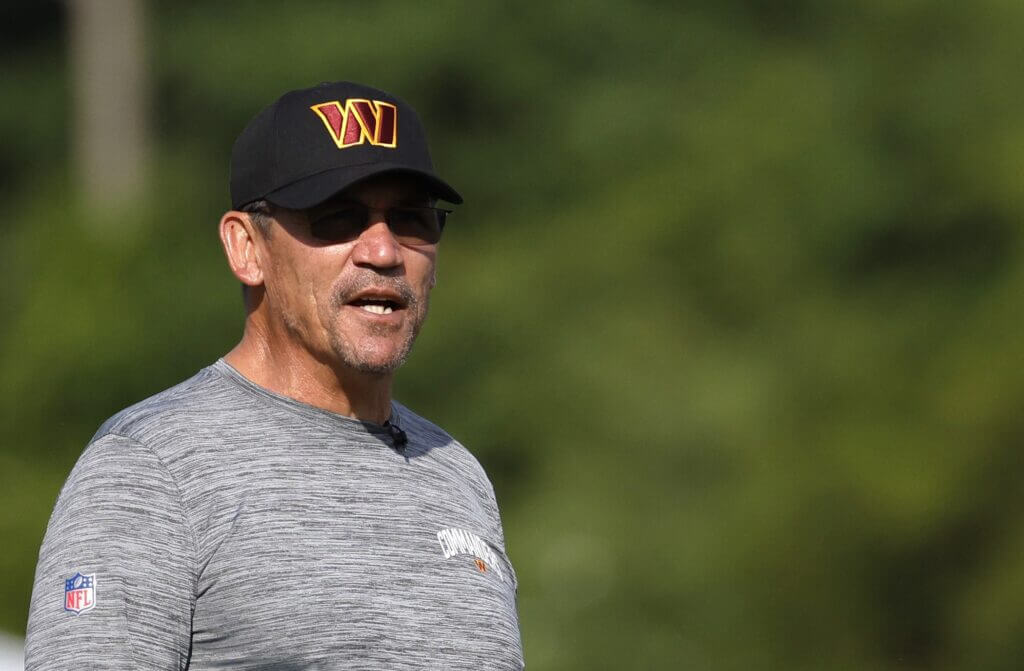 ASHBURN, Va. — The “thwack” is back at practice. On the second day with pads at Washington Commanders training camp, crankiness arrived as well.

It’s been a business-like approach for the first calendar week, with some playful trash talk — hello, Montez Sweat — serving as the soundtrack. The sounds of pads colliding joined Tuesday’s playlist. On Wednesday, as the offense delivered an effective showing, chatter among players increased — and head coach Ron Rivera called out the noise.

Not for any jocular banter, like when the offense opened an 11-on-11 set with two tight ends and Sweat hollered at the offensive linemen about trying to “hide” behind 12 personnel. Rivera warned players that with pads, the intensity would rise and focus could waver. So when linemen on both sides kept up conversations Wednesday after plays during a no-huddle situation, the coach called them out.

“The reason I did (that) was because we were working a certain phase of our game. … No-huddle. And we’re sitting there arguing about little things,” Rivera said. “The whistle gets blown, and we’re still screwing around. We can’t do that. We got to get our asses in position, and we got to play football. That’s what I was off about.”

Rivera’s agitation wouldn’t make for a lengthy NFL Films segment, though he couldn’t keep Daniel Wise’s name out of his mouth, shouting at the defensive tackle after a little extra action following one play.

“When the game gets hard, when there’s pressure on you, you can’t do that. You got to maintain your focus and line up and play football,” Rivera said. “You got to get past those things. That’s why I was a little agitated about what went on out there, because you can’t get those real reps until you play a game, but this is as close as it’s going to get.”

The offense settled in with a workman-like showing devoid of turnovers. That was a combination of cleaner play from Carson Wentz and the other quarterbacks but also a cleaner pocket. The offensive line, one of the shakier units to date in camp, remains short-handed.

After losing most practice day battles, the pads helped the O-line even the score.

“It’s funny, people don’t realize it, but when you’re in pads, it’s a whole different mentality for the front, for the offensive line,” Rivera said. “They don’t have to catch because they can now strike. When you don’t have pads on, you’ve gotta be smart about how you make contact and how little contact you should make. So, it doesn’t look good as far as the offense is concerned, but now things are balanced out.”

The defenders must counter accordingly.

The D-line prepped for hand-to-hand combat pre-practice under the direction of assistant DL coach Jeff Zgonina. Players would carefully approach a series of pop-up tackling dummies before throwing a quick jab with one hand followed by a haymaker with the other. After running the gauntlet, the final task involved swiping at the arm of DL coach Sam Mills, who played the role of a stationary quarterback holding a hypothetical football.

“The linemen can grab a little more,” linebacker Cole Holcomb said of a difference with pads. “There’s definitely more contact. You got to be on your P’s and Q’s with your fits, and you got to be a little more violent using your hands.”

Rivera has no issue with that approach, as long as a focus on improving wins out over the need to bark.

Some additional position-by-position notes beyond the offensive line…

Washington’s solid day offensively coincided with an emphasis on quick and underneath passes. Or at least that’s where Wentz often threw, with Samuel and running back J.D. McKissic heavily targeted. While Wentz’s arm strength opens up the deep ball facets of the playbook — he found an open Terry McLaurin for a healthy gain down the left side — his inaccuracy shows the longer he scans for receivers. Overall, the quarterbacks avoided interceptions for a second consecutive practice.

After three days of limited to no on-field work, Curtis Samuel participated in full on Wednesday. He caught short passes on consecutive plays and appeared unencumbered with his movement. The coaches used Samuel in the slot and at the X and Z positions.

“That’s his versatility, and that’s what we really expect from him,” Rivera said.

The coach reiterated the workload “plan” for Samuel during camp, saying, “We know he’s a valuable piece, and once we can get him into that shape … you can cut him loose and let him go.”

Dyami Brown did not participate in Wednesday’s session.

Like all newbies, Cole Turner needed to learn tons of first names upon joining the team. No issue with the starting quarterback.

Not because Carson Wentz is an established pro, but because he shares the same first name as Turner’s college passer. Carson Strong wasn’t just the signal caller at the University of Nevada but Turner’s multi-year roommate. It led to mild confusion for the rookie when he calls Wentz “Carson.”

There’s no question the new guy and his new Carson are establishing chemistry early in camp.

“He’s a great guy, first off,” Turner said. “He talks to me a lot about stuff outside of football, so I think we kind of built a little bit of a chemistry off the field, and I think it’s translated to on the field really well.”

Wentz seeks out tight ends more than almost every quarterback in the league. According to TruMedia, only Lamar Jackson (32.6 percent) has targeted tight ends at a higher rate than Wentz (31.1) since 2016, the year Wentz was drafted No. 2, and no QB has more attempts to tight ends (915).

“The additional reps have helped me out for sure to get a better grasp,” Turner said. “The easiest way of learning something is by doing it.”

Blocking is a weakness, so Turner puts in extra work with position coach Juan Castillo.

“It’s a little different blocking at this level where guys are a little bigger,” Turner said. “At the end of the day, technique will save you. So as long as we keep working hard and keep our technique, I think it’ll only keep getting better.”

Daron Payne received a veteran’s day off, leading to first-team reps for second-round pick Phidarian Mathis and Wise. Mathis, more run-stuffer than pass rusher, won’t show his full skill set until preseason games but is part of the DT rotation with Payne and Jonathan Allen. Filling out the tackle depth is part of Washington’s to-do list.

“I do like the challenge of finding that fourth guy,” Rivera said. “Even though Phil (Mathis) is still a young guy, he’s shown some flashes that show he belongs, and that’s really a huge plus for us. But after that, Daniel Wise has done a really nice job. … We have a couple of other guys that we’re looking at.”

Casey Toohill primarily lined up opposite Sweat as defensive end James Smith-Williams (hip) missed a second consecutive practice. Smith-Williams, absent on Tuesday, made an appearance on a stationary bike. The hierarchy among the other DE options remains unsettled, though Bunmi Rotimi’s pass-rushing prowess showed in one-on-one work.

Rivera announced that undrafted free agent Drew White suffered a season-ending ACL tear during Tuesday’s practice. The Notre Dame alum was a roster longshot, but that’s not much different than all the linebackers behind Cole Holcomb, Jamin Davis, David Mayo and Khaleke Hudson.

Rivera wants to study the group before signing a veteran free agent, though a depth replacement at least for White is possible. Milo Eifler and De’Jon Harris spent time with Washington late in the 2021 campaign and are making strides toward sticking around.

“It’s been fun, man,” the veteran corner said of his mentor role. “I think it’s something that the whole group has been taking pride in. Everybody being able to learn from each other, ask each other different questions and things like that. I love it because it’s all about us learning the game. The more you learn the game, the more you understand the game, that’s when it slows down, it gets slower. You’re able to go out there and make plays.”

To fill White’s roster spot, Washington signed free agent CB De’Vante Bausby, according to a source. Bausby, one of four defensive backs to try out after practice, has previous NFL experience and most recently played in the USFL.

The CHAMPS came out to practice and then started draining some deep field goals. BOMBS. Flawless form. Thanks for coming out @WashSpirit that was a blast! pic.twitter.com/ct90oHvHUF