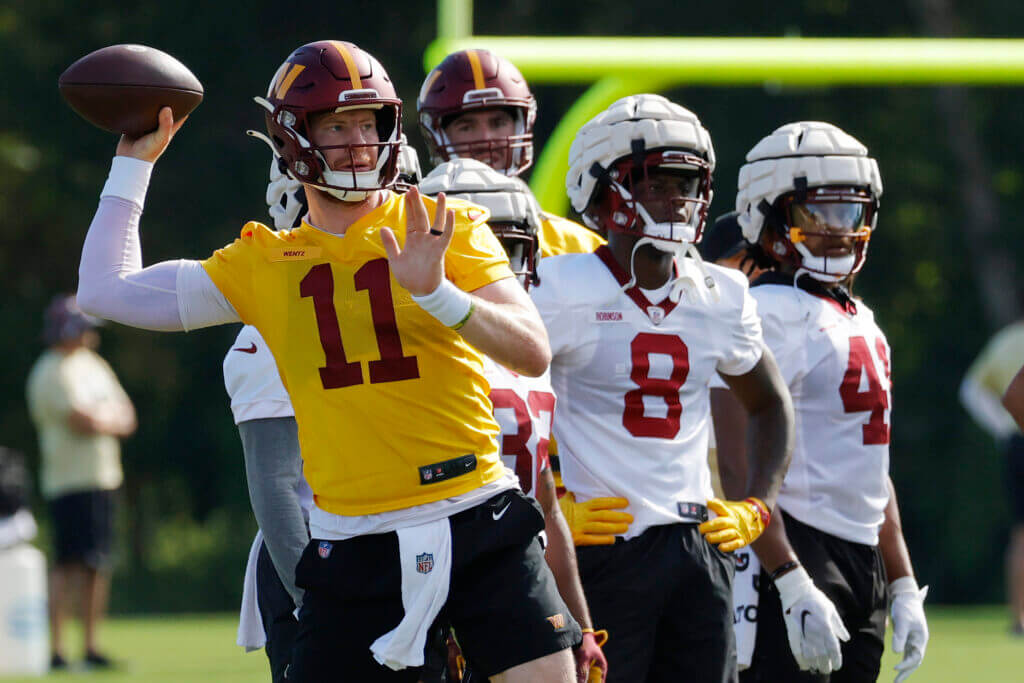 “There are still some guys I think that could step in and push for time. … I think there’s still some spots that we can get some more clarity on,” Rivera said on Saturday moments after his team concluded week one of training camp.

That’s a fine sentiment and an extremely appropriate one from the head coach. It’s just not a completely accurate depiction of the current 11 offensive and defensive spots.

Granted, rotations run deeper in this era where backfield-by-committee and defensive sub-packages are commonplace if not a majority approach. This isn’t like the NBA, where the standard five players are repeatedly on the court for the opening tip. Washington could open a given game with two tight ends or three safeties. Rivera’s answer on Saturday to a question about lineup competition extended beyond the main 11 on each side of the ball.

Yet there’s a reality of starters. The television broadcast needs to populate those opening graphics. Injuries or the unforeseen aside, the networks can begin producing their Commanders’ lineup with high confidence right now.

The defense, if we include injured defensive end Chase Young who will miss at least Washington’s regular-season opener (and likely more), returned 10 of the 11 starters from a group that ranked 27th in Football Outsiders’ DVOA metric last season. Whether based on potential or depth, there’s no sense any of the 10 lose their job before Week 1.

Cornerback Benjamin St-Juste is the clubhouse leader for the nickel-back role, which is Washington’s 11th defender over a third linebacker. Safety Landon Collins, released this offseason, served as the hybrid “Buffalo” nickel last season. The secondary labored during the first half of last season with communication.

During a radio appearance on 106.7 The Fan this week, Rivera told the hosts he sees the defense’s continuity as a good thing. Build off the sweat and mental equity already in the bank.

“That secondary is intact. For the most part, the defensive line is pretty much intact. I’m talking about the primary guys. … The same guys in the same system. If you keep changing people what do you got to do? Got to retrain everybody,” Rivera explained.

More movement existed on the offensive side. Trading for quarterback Carson Wentz was Rivera’s Ruthian big swing of the offseason. The coach, unlike last season, isn’t pretending there’s a QB competition.

Since using three wide receivers is pervasive, rookie wide receiver Jahan Dotson gets the starting nod alongside Terry McLaurin and Curtis Samuel. We haven’t seen much of that trio together over the past two practices, as the training staff is limiting Samuel’s usage — significantly on some days — to help avoid last season’s injury-ravaged campaign.

Probably Carson Wentz’s best throw today came in the red zone. He overthrew Jahan Dotson in the end zone the previous play and then came back to the rookie over the middle on a similar look.pic.twitter.com/7sKskvZgFw

Washington will start two new guards. Maybe there’s a debate on the right side though Trai Turner, a five-time Pro Bowler with Carolina under Rivera, is the projected starter over Wes Schweitzer. Schweitzer mainly played center in camp with Chase Roullier (fibula, ankle) and Tyler Larsen (Achilles) rehabbing. A step or two below that prior Pro Bowl level, Turner sat out the past three practices with a quad injury.

“I think going into (training camp), you’re confident about those guys,” Rivera said pre-camp to the notion of having starters locked in. “There are some spots that we got question marks, obviously we got to get those things answered. A lot of it also is going to be predicated on what we’re doing.”

That “doing” mention is more about scheme, game-planning and depth rather than the main 11 per side.

Washington activated Roullier from the physically-unable-to-perform list on Thursday. The team’s longest-tenured lineman suffered a broken fibula and a significant ankle injury on Oct. 31 at Denver. During this “ramp-up period,” Roullier is adjusting to “new hardware literally in my ankle that will never feel fully the same again.”

One short-term starting job is in play until tight end Logan Thomas (knee surgery) comes off the PUP list. John Bates would handle the gig usually, but the second-year player has missed most of camp with an undisclosed injury, leaving young and inexperienced players to fill in.

Fifth-round pick Cole Turner already looks like a savvy route-runner and pass catcher. Same for Curtis Hodges, a 6-foot-8 UDFA who capped a red-zone drill drive by snaring a dart from Taylor Heinicke during Saturday’s practice. Sammis Reyes, primarily a blocker during his apprenticeship last season, caught three passes on one drive Saturday from Wentz.

Running back Antonio Gibson participated in position drills Saturday after sitting out the first three days of camp with a hamstring issue. The backfield usage is one of the more intriguing camp watches, but Gibson remains RB1 with Brian Robinson and J.D. McKissic poised for steady work.

Steady would be an improvement for the defense. If Rivera’s continuity take proves accurate, cornerback William Jackson will be exhibit A. Washington’s top 2021 free-agent signing labored early last season while adjusting to a new scheme. Jackson improved the zone concept over the second half of the season. The development continues.

St-Juste will play plenty since Washington used five defensive backs as its majority approach last season. None of the other corners will push for starter snaps. Safeties Darrick Forrest and Percy Butler remain candidates for the “Buffalo” aspect of the nickel role when the need veers away from pure coverage.

There is already an upside limitation defensively until Young returns. That might not happen until Week 5 if the 2020 Defensive Rookie of the Year opens the season on PUP or injured reserve. Squint, and there’s a near-term starter decision on deck. However, James Smith-Williams is the clubhouse leader to fill in opposite Montez Sweat, with Efe Obada, Casey Toohill, and Shaka Toney vying for snaps.

Quality depth is mandatory in professional football, with or without injuries. Bet on bumps and bruises occurring and starting lineup changes coming as a result. Until then, Washington’s starters seem evident.