The end of an era might be looming for Wolverhampton Wanderers. It is not one the club will usher in without a significant amount of thought and soul-searching, but it might well be one they cannot in good conscience prevent.

It was five years and three managers ago that Conor Coady was last properly left out of a Wolves starting line-up.

The club were in a different league, in more ways than one, and Coady was still a central midfielder.

In the period of rich success that has followed at Molineux, the now 29-year-old has been the most constant on-field thread. So letting him leave this summer would be a major decision for head coach Bruno Lage and technical director Scott Sellars.

But it might well come down to showing Coady the same respect and loyalty he has shown them.

Everton are interested in signing him, although no deal to take Coady back to his native Merseyside is thought to be close. Other clubs will no doubt be monitoring the situation, too, such is Coady’s positive influence on any dressing room he sets foot in. 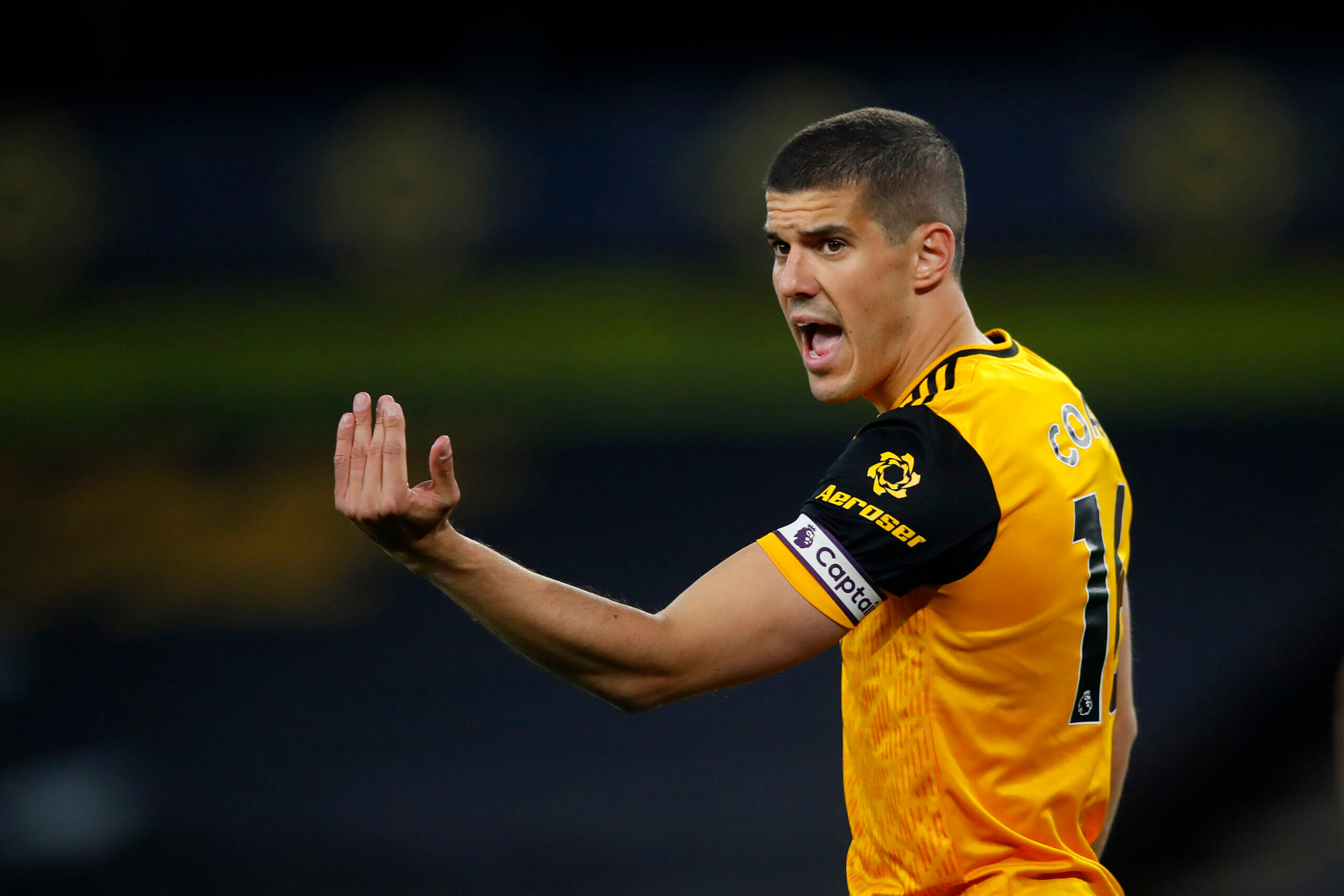 Coady has been an inspiration on and off the pitch at Molineux (Photo: Malcolm Couzens/Getty Images)

It is likely that tomorrow (Saturday) will be the day when Coady’s proud record of ever-presence in Wolves’ starting line-up comes to an end.

April 25, 2017  — a late-season Tuesday night home game against Huddersfield Town for a side about to finish 15th in the 24-team Championship — was the last time Coady was left out by choice by a Wolves manager (Paul Lambert, for the record). But when they rock up at Elland Road this weekend for the first game of a new Premier League season, he is likely to be named among the substitutes.

While that should not necessarily mean the end of what has been a seven-year spell at the club, it does represent a significant place-marker as the moment when his status as not just an automatic starter but the first name on the teamsheet became a thing of the past.

Lage has spent the last few months wrestling with the Coady conundrum — a headache that had also occupied the thoughts of predecessor Nuno Espirito Santo in the latter stages of his impressive Molineux reign.

The issue has plenty of nuance and complexity but at its heart it boils down to two key questions.

Does Coady get into Wolves’ best XI if they switch to a four-man defence? And if he doesn’t, is his influence on the team and the club so great that the formation should be tailored to suit him?

For the time being at least, Lage has concluded that the answer to both questions is no.

Coady would doubtless dispute the notion that he cannot play in a back four. He did so when Nuno attempted briefly to shift away from the three-at-the-back approach that had helped Wolves reach the Premier League and then re-establish themselves in the top flight. And at times, did so with a decent level of success.

Yet there is a general belief among the coaching staff at the club’s Compton Park base that while Coady cannot be completely discounted as one of two centre-backs, it is not a role that suits him naturally, especially as part of the front-foot, high-line team Lage is attempting to develop in his second season in charge, in which speed on the turn is an important asset. 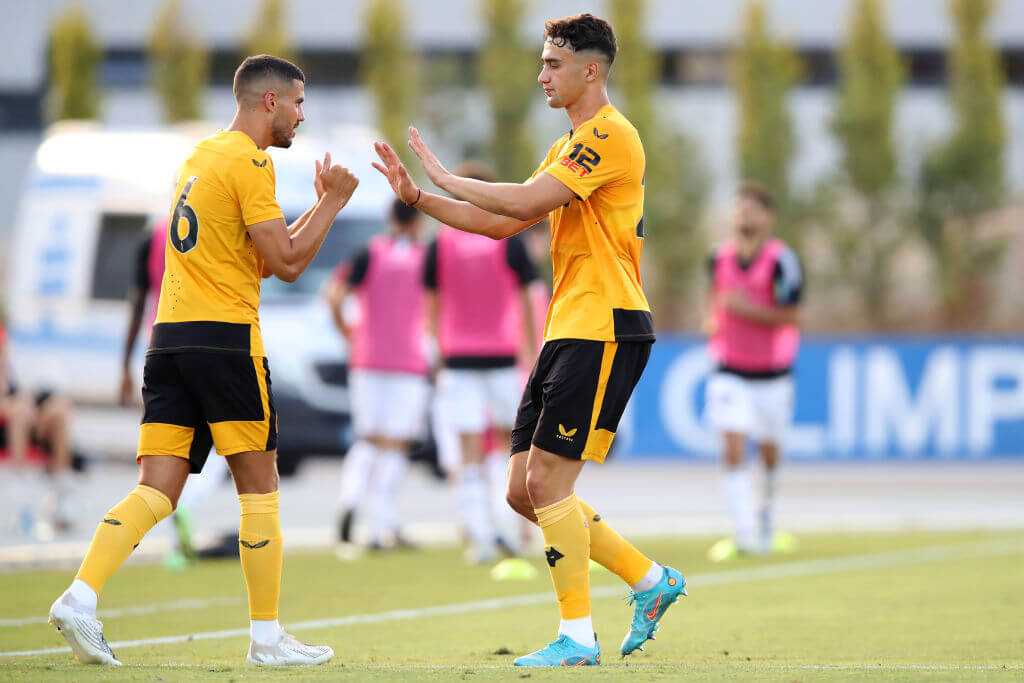 Coady replaces Maximilan Kilman in pre-season. Lage is set to favour the latter and Nathan Collins in a new-look back four (Photo: Jack Thomas – WWFC/Wolves via Getty Images)

The former Liverpool youngster has carved out a niche for himself as a specialist at playing in the middle of a central defensive trio — and over a period of largely successful football for Wolves, he has become one of the best in the country at it.

His regular presence in Gareth Southgate’s England squads over the past couple of years, and his appearances in the starting XI when the manager opts for a back three, is testament to just how good Coady is in that role.

But Lage’s answer to Wolves’ lack of goals — they have averaged less than one per game over the last two Premier League seasons — is to introduce a system with four defenders which allows him to get more of the squad’s exciting attackers on the pitch together.

And the evidence of the pre-season fixtures, when Morgan Gibbs-White, Daniel Podence and Pedro Neto were deployed frequently as a fluid, interchanging trio either behind striker Raul Jimenez or as a front three, was encouraging.

In central defence, Wolves have high hopes that Maximilian Kilman, 25, will go from strength to strength as his first-team experience increases and they spent £20million ($24m) on Nathan Collins this summer because they believe the 21-year-old Republic of Ireland international has rich potential, too.

It will be a surprise if those two do not get the nod to start at Elland Road tomorrow.

The problem for Lage is that his new approach makes it difficult to find a place for a man whose value to Wolves has always been measured beyond headers won, tackles made or recovery runs completed.

Coady has, quite simply, been Wolves’ leader in every sense of the word, keeping the dressing room in order and guiding his colleagues through games. He has been the on-field voice of first Nuno and now Lage — effectively Wolves’ manager on the pitch.

Will what Wolves lose in terms of Coady’s drive, leadership and organisation be outweighed by what they gain through playing their new, more attacking system? Or will a lack of experience in defence lead to a recall for the skipper, or even a permanent return to the system that suits him best?

Those questions will be answered in time. But Coady might conclude that, with a World Cup now just over three months away, he does not have the luxury of waiting.

With his place in Southgate’s squad for Qatar not guaranteed and with this tournament representing his best chance to take part in world football’s biggest event — he’ll be 33 when the 2026 finals begin — he might conclude he needs to do what is best for himself.

If he does, it seems inconceivable that Wolves would stand in his way.

For now, though, Coady will remain an influence in the background.

The expectation is that he will continue to lead, encourage and support the squad just as he always has. It was not for nothing that he was named by Southgate’s assistant Steve Holland as England’s player of the tournament at last summer’s European Championship, despite not playing for a single minute during their seven matches.

And he will doubtless continue to push hard for a recall and convince Lage that a formation change should not be a barrier to his selection.

But should he find himself still on the outside looking in when the transfer window nears its last knockings, he will have a big decision to make, one that Wolves will be almost duty-bound to respect.

In the last five years especially, Coady has established his status as the greatest Wolves captain in several generations, leading the club back to the Premier League and to great feats within it and on the European stage.

He has been a credit to the club, and an ambassador for them. And for those reasons, he deserves the chance to decide his own future.

Have your parents messed you up? And three other key questions to help you regain control of your life