The Cowboys have officially trimmed their roster down to 53 and there is no kicker or long snapper and only one quarterback. This will obviously change in the coming days. Procedural moves were made to keep the most talented group together.

Several transactions still need to be made from the initial 53, like putting LT Tyron Smith (hamstring) and WR James Washington (foot) on injured reserve. They needed to be on the initial 53 so they are eligible to return later in the season. As Cowboys owner and general manager Jerry Jones said Tuesday morning on 105.3 The Fan in Dallas, he expects Smith to be back for “the meat of the season.”

Here’s a breakdown of the current 53.

Cowboys roster moves to get to 53: pic.twitter.com/F4rTMqOaRe

Cooper Rush and Will Grier both could be re-signed, but at least one will be on Dallas’ roster when the Cowboys open the season against the Tampa Bay Buccaneers on Sept. 11. It’s possible that Rush is added back to the 53 while Grier could be added to the practice squad. Jones said Tuesday that Prescott is in the “best shape that I’ve ever seen him.”

The first two were obvious. The third spot came down to Dowdle and undrafted rookie free agent Malik Davis. Look for Davis to return via the practice squad as long as he is not claimed by another team.

“With our plan and our personnel,” Jones said Tuesday, “we hope to be able to run the football more than we ran it, let’s say, in the last few years. And Zeke will be critical to that.”

Eight wide receivers is a lot. But Washington is going to IR and Gallup is unlikely to be ready early in the season. However, Jones said Tuesday that if Week 1 was the Super Bowl, Gallup would be playing. The Week 1 starters are expected to be Lamb, Tolbert and Brown, but all six should see playing time. Turpin will likely be part of some offensive packages while his greatest impact will likely come on punt and kick returns.

This certainly was not the prediction entering camp. Schultz and Ferguson were expected, but so was Sean McKeon. Instead, Hendershot outplayed McKeon, who had been dealing with a knee injury. McKeon could return via the practice squad if he clears waivers.

“I think it’s pretty well documented these two young tight ends have certainly come through for us,” Cowboys executive vice president Stephen Jones said Monday on The Fan. “We drafted Ferguson in the fourth and he’s been everything and more we could have hoped for. And of course, getting Hendershot as a college free agent is starting to look like a real value for us. He’s really stepped up, and as you saw (Friday) night, made plays. The game is not too big for him. He’s competitive. Just feel like those three tight ends have really earned their way to being a big part of this season.” 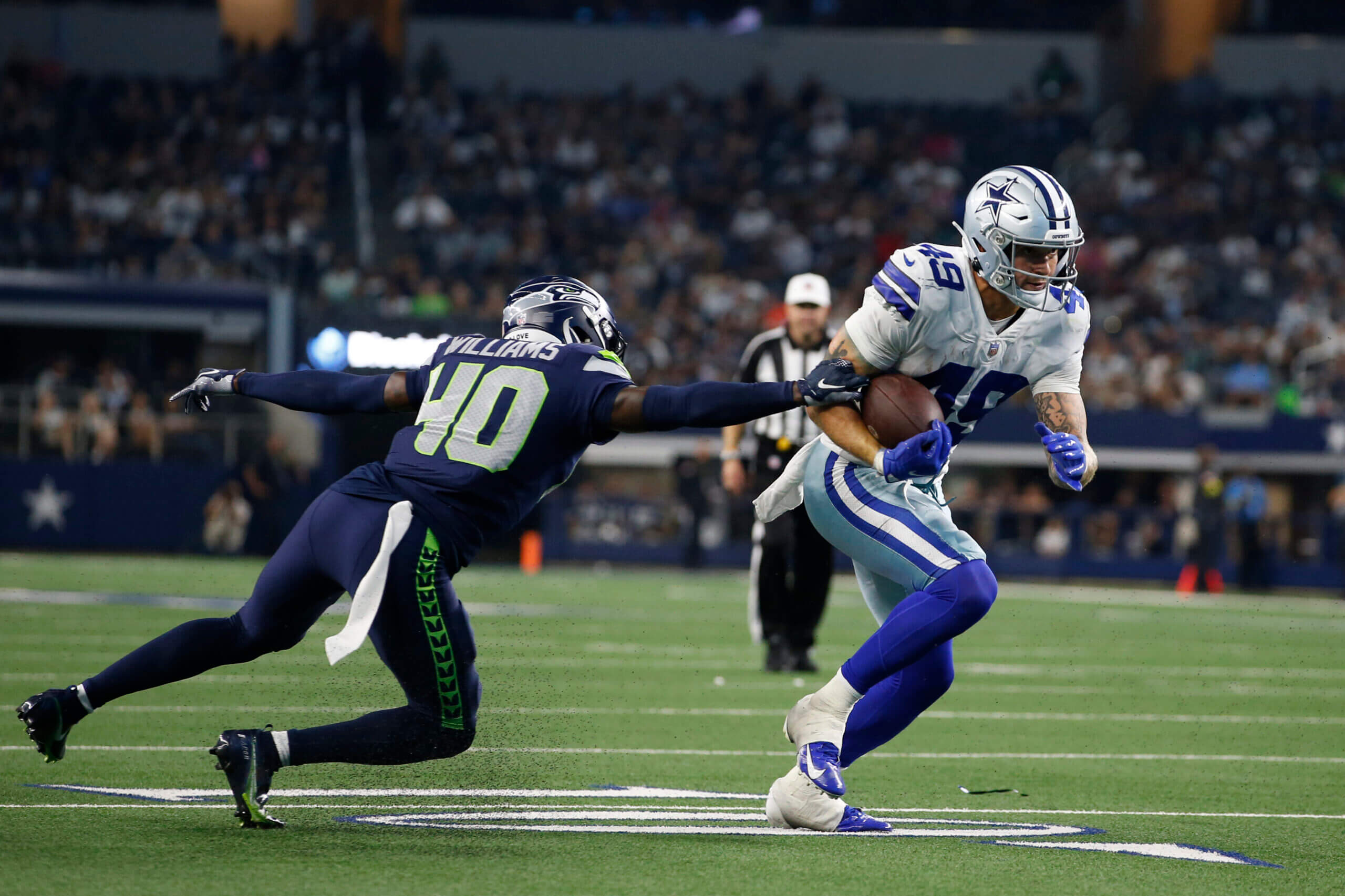 This group is likely to get at least one addition from outside of the building, likely a veteran tackle for depth purposes. The current plan is to go into Week 1 with a starting lineup of Tyler Smith at left tackle, McGovern at left guard, Biadasz at center, Martin at right guard and Steele at right tackle. Jerry Jones said Tuesday that the ankle issue that sidelined Tyler Smith during last Friday’s preseason finale is a “little high ankle” sprain. He was cleared to return to practice Monday.

“We don’t think that’s serious enough to limit his preparation,” Jones added. “Now, what is the case is he hasn’t been there at left tackle. He is a rookie, but he is a first-round pick and he deserved to be a first-round pick, in my mind. So, we knew, we just didn’t want it to come earlier than it needed. But we knew we had to get ready to replace our left tackle, and he was the pick.”

Brett Maher is still expected to be the team’s kicker and Jake McQuaide is expected to continue as their long snapper. They were just left off the initial roster because, like special teams ace C.J. Goodwin, they are vested veterans and cannot be claimed off waivers by other teams. The Cowboys have made similar moves with their initial 53 in the past.

The Cowboys went with 11 here because it is arguably the deepest position group on the team. All 11 are capable of playing Week 1. The most notable moves were keeping Ridgeway, a fifth-round pick, and parting ways with veteran DT Carlos Watkins. When asked Tuesday to name some players who have impressed him throughout training camp and the preseason, Jerry Jones immediately named three defensive linemen.

“I’m going to go right to the center of that defensive line,” Jones said, “Trysten Hill has really had a great camp and has come back with the kind of energy, he’s always had the skills, the quick twitch that we wanted. And then Bohanna, the big nose tackle in there. And I would say that when you look at where we are inside, we’re beefed up, and that’s what we wanted and that’s what we got, and we needed those guys that I just mentioned to have good camps and they have had. I really like what Sam Williams has shown. He’s everything you want when it comes to getting after, if you will, being a force running the ball down. I think he’s got (DeMarcus) Lawrence-type tenacity, and he’s certainly got the skill, the speed to run across that field and really cover a lot of ground.” 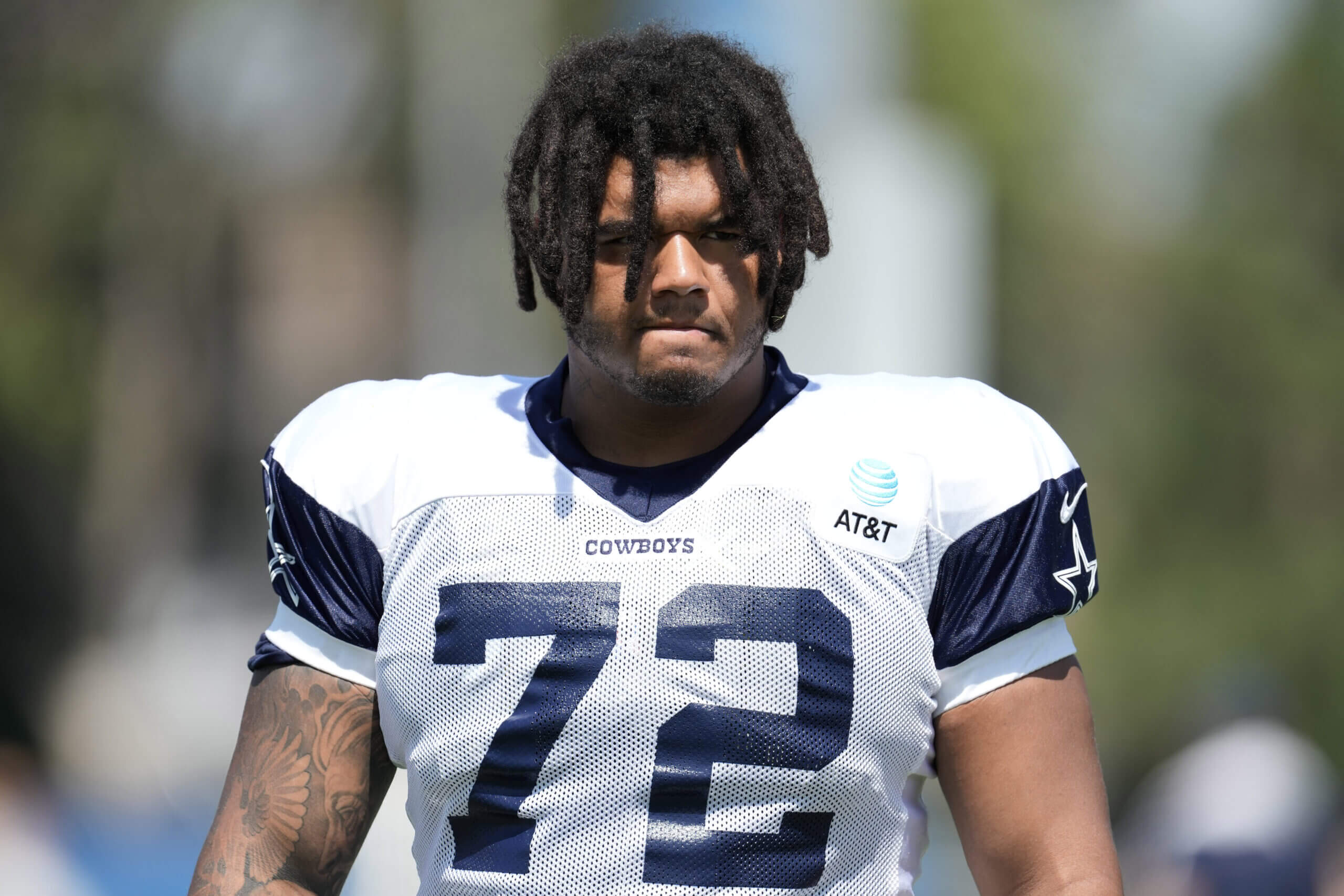 This is pretty much what was expected. The only somewhat surprising move is that they kept Gifford and Harper. Many figured it would come down to one or the other.

These are the same six who were expected at the start of training camp. And they’ve pretty much stayed in order as they were entering camp, except for Bland. The rookie has jumped up to the fourth spot behind the starters: Diggs, Brown and Lewis.

Same deal as the cornerbacks. Entering camp it seemed like there was a good chance all five would make the team. Mukuamu and Bell guaranteed it with their strong play in the preseason. Bell is one of three undrafted free agents from this year’s draft class to make Dallas’ roster, joining Hendershot and Houston. Turpin was also an undrafted player but he was not part of this year’s draft class.