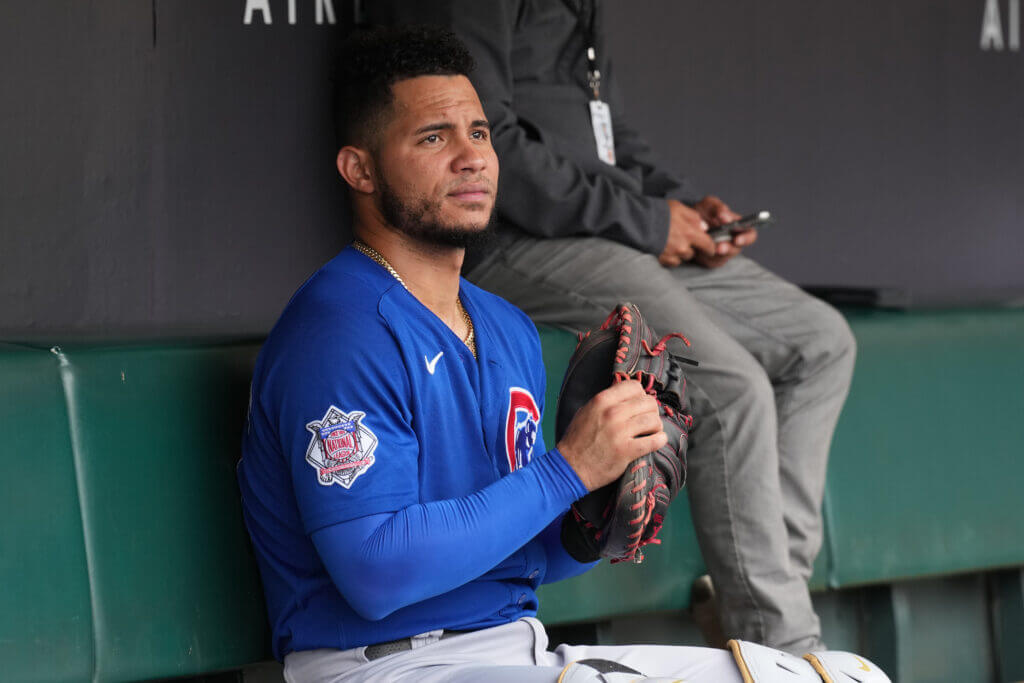 SAN FRANCISCO — Willson Contreras’ silence spoke volumes during the times the Cubs opened the visiting clubhouse to reporters during their four-game series at Oracle Park. There was a fleeting glimpse of Contreras here or there, walking into areas that are off-limits for the media. Win or lose, Contreras wasn’t at his locker when the beat writers entered the room after the first three night games in San Francisco. Contreras kept his headphones on when he briefly stopped at his locker Sunday afternoon before what looked like his last game in a Cubs uniform.

That reality sunk in for Contreras as he sat in the dugout, staring out onto the field after a 4-0 loss, hugging teammates as ESPN’s “Sunday Night Baseball” focused on him for the reaction shots. With less than 48 hours remaining until the trade deadline, Contreras drifted back to the clubhouse where he once partied as a rookie after the Cubs eliminated the Giants from the 2016 playoffs. Standing shirtless at his locker and still wearing his gray uniform pants, Contreras put on a blue short-sleeve Cubs pullover for the cameras.

Until that moment, it was noticeable how Contreras avoided reporters in San Francisco, which shouldn’t be interpreted as a complaint about media access or personal criticism. It was simply a window into what Contreras must really be thinking, a noticeable shift from how consistently available he had been from the start of spring training through the last game at Wrigley Field before the trade deadline. That still left a week for Jed Hoyer’s front office to try to drum up interest in the All-Star catcher, leverage teams in the playoff race and extract the maximum amount of future value in a trade.

Until something happens, what else is Contreras supposed to say? The Padres have explored the concept of a blockbuster deal that would add Contreras, All-Star outfielder Ian Happ and closer David Robertson, The Athletic’s Ken Rosenthal reported, with the Mets and Astros also among the teams that have Contreras on the radar. Barring a last-minute breakdown in trade negotiations or an unlikely reunion as a free agent, Sunday marked Contreras’ 737th (including the postseason) and final game with the Cubs.

“I know you guys are trying to do your job and I’m OK with that,” Contreras said. “But I feel like I was saying the same thing over and over because I don’t know what’s going to happen and when it’s going to happen. I didn’t want to say anything that I would regret later.”

Contreras dismissed the significance of recently scrubbing and restoring some Cubs images from his Instagram account: “I just wanted to remove some old posts. That has nothing to do with anything.”

The Cubs’ overnight charter flight out of San Francisco was scheduled to land around 4 a.m. local time in St. Louis on Monday, which is an off day for the Cubs. Contreras planned to play video games, relax at the hotel and stay off his phone. The trade deadline is 5 p.m. local time in St. Louis on Tuesday, or 1 hour and 45 minutes before the scheduled first pitch that night at Busch Stadium.

“Mentally, he’s wondering what’s going on,” Cubs manager David Ross said. “I don’t blame him. We’ve seen he’s an emotional player, in a great way. We’ve seen a lot of things that are important to him and he’s had to deal with. I would think that would affect anybody.”

That helps explain Contreras’ prolonged offensive slump throughout July, which has seen the explosive, well-rounded hitter bat .149 with a .489 OPS and 25 strikeouts in 19 games. The first instinct is to think the team’s uniformed personnel also want to get this over with and end the trade-deadline drama. Except then what? There are still 61 games remaining in this season and so many variables to this rebuild.

The construction of the DraftKings sportsbook at Wrigley Field hasn’t finished yet, but if it was open for business right now, the over/under on the number of Cubs players traded between Saturday’s Chris Martin deal with the Dodgers and Tuesday’s deadline would probably be 5.5. Deciding to sell is the easy part; finding and developing players like Contreras is hard work.

“It’s a double-edged sword,” Ross said. “No news for me is good news, right? All the players are still here. Awesome. When we make a trade, it’s like, OK, I’m happy for Martin to go try to chase another ring. But I’m also happy to get to know a new piece to our future puzzle. I see both sides of that. There’s positives and negatives. You hate to lose guys you depend on, guys that work hard. You’re appreciative of that.

“The players probably feel a little bit the same. You’re sad to leave your teammates. You’re sad to leave an organization you’ve been with. You put a lot of work in. But there’s also excitement about what’s new and what’s next for them. Everybody’s got a job to do. The goal is to get to be the team that’s buying in this situation and chasing championships and that’s where we’re headed.”

There are many numbers and notations on Contreras’ Baseball Reference page, detailing the three All-Star selections and his 2016 World Series ring as well as the age (30) and catching workload (more than 4,800 innings) that factor into the organization’s long-range projections. But the transactions section sums up what means so much to him: “July 2, 2009: Signed by the Chicago Cubs as an amateur free agent.”

That’s it. No trade or release before Contreras finally became a big-time prospect, no Rule 5 selection when the Cubs left him unprotected in that draft, no contract extension, still waiting for his first chance at free agency. The Cubs can mean different things to different people, but this is the only organization he has known since he signed for $100,000 as a 17-year-old out of Venezuela.

“Like I said before, if I’m going to walk away, I’m going to walk away with my head up high,” Contreras said. “From day one, since 2016, I’m trying to do my best to help this team to win and make it better. I’m really thankful for the time that I’ve been here — 14 years — but obviously this game shows you that it’s not about feelings. It’s about business. That’s something that I learned this year — it’s not about feelings.”

Though Buster Posey once anchored the three even-year championship teams in San Francisco, the Braves, Dodgers, Nationals and Red Sox have won the last four World Series with a combination of complementary catchers instead of a singular star. The Cubs appear to be comfortable with the idea of moving forward next season with catchers Yan Gomes, P.J. Higgins and Miguel Amaya and investing in other areas of the roster. Over the years, there have been questions about Contreras’ ability to frame pitches and handle other subtle aspects of the job, but no one has ever questioned his passion or work ethic, and his influence has been felt by all the young pitchers the Cubs have incorporated in recent seasons.

At the end of an 11-minute group interview, Contreras shook hands with reporters and someone mentioned Kris Bryant’s comment from simpler times, back when the Cubs thought they had a dynasty, about how St. Louis is “boring.”

“Tomorrow’s an off day,” Contreras said. “We’ll see what happens. It’s going to be a long day. It’s been a long, long, long week, a long, long month for me. But I’m ready for this to be over, to be honest.”